Watery diarrhea, hypokalemia and achlorhydria (WDHA) syndrome caused by vasoactive intestinal polypeptide (VIP) -producing tumor only rarely occurs in patients with nonpancreatic disease. A 49-year-old woman was referred for evaluation of a right adrenal tumor incidentally diagnosed by abdominal ultrasound during the investigation of chronic watery diarrhea. Laboratory findings showed hypokalemia and excessive production of VIP and catecholamines. After surgical resection of the tumor, diarrhea subsided and both electrolytes and affected hormone levels normalized. Immunohistochemical examination confirmed a diagnosis of pheochromocytoma, which contained VIP-positive ganglion-like cells. We herein present the clinical and histogenetic implications of this rare clinical entity, with literature review.

A rare syndrome of watery diarrhea associated with hypokalemia and achlorhydria (WDHA) was first described by Verner and Morrison in 1958[1], and has been assumed to be due to hypersecretion of vasoactive intestinal polypeptide (VIP)[2]. In adults, this syndrome is most commonly associated with pancreatic islet cell tumors, but rarely can be caused by nonpancreatic tumors, such as bronchogenic carcinoma, medullary thyroid carcinoma, retroperitoneal histiocytoma and adrenal pheochromocytoma[3]. In this report, we describe a woman who presented with chronic watery diarrhea and hypokalemia due to a right adrenal pheochromocytoma, which was immunohistochemically confirmed to contain immunoreactive VIP. After surgical resection of the tumor, symptoms completely disappeared and the preoperatively elevated plasma VIP level normalized.

A 49-year-old woman was referred to our hospital for evaluation of a right adrenal tumor. For several years, she had experienced protracted episodes of watery diarrhea, up to 6 times in 24 h, without blood or mucus. In the course of evaluating the diarrhea, an abdominal ultrasound was performed by her primary physician and a right adrenal tumor was incidentally discovered. She had no history of headache, palpitation, perspiration or hypertension. She also had no relevant familial history of endocrine disease. Her height was 150 cm and weight 46.8 kg. Physical examination showed blood pressure of 110/67 mmHg and regular heart rate of 70 beats/min. Laboratory tests showed hypokalemia of 3.1 mEq/L. Fasting blood sugar was 179 mg/dL and a 75-g oral glucose tolerance test (75-g OGTT) showed a pattern indicating diabetes mellitus. Results of complete blood cell count and other routine biochemical tests were within normal ranges. An abdominal computed tomography (CT) scan demonstrated a mass measuring 6 cm in diameter in the right adrenal region, but there was no apparent abnormality in the pancreas (Figure 1A). Magnetic resonance imaging (MRI) of the pituitary fossa was normal. 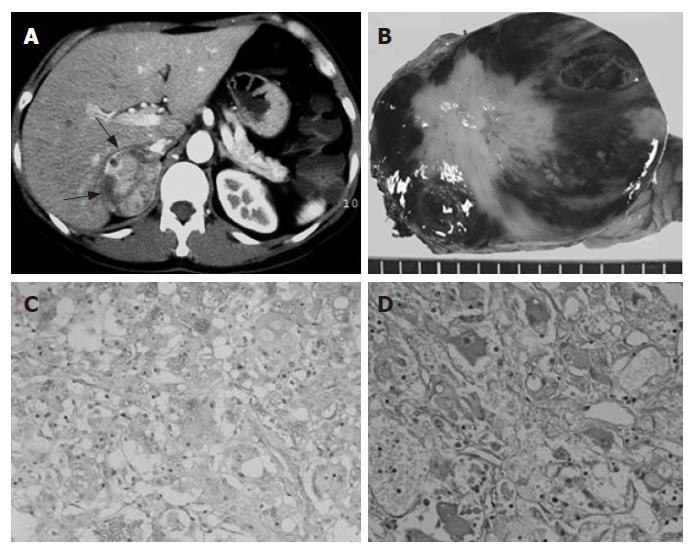 Based on these results, the patient was diagnosed as having an adrenal pheochromocytoma with excessive catecholamine production and WDHA syndrome due to the excessive secretion of VIP, probably produced by the pheochromocytoma.

She subsequently underwent surgical resection of the tumor. At laparotomy, the tumor was found above the upper pole of the right kidney and was separated from the pancreas. Right adrenalectomy was accomplished without complications except for a transient elevation of systolic blood pressure up to 190 mmHg during manipulation of the tumor.

The patient had an uneventful postoperative course. The diarrhea soon subsided, and the laboratory data demonstrated normalization of plasma potassium level and improvement in glucose tolerance. The postoperative plasma levels of VIP and catechoamines as well as the 24-h urinary excretion of catecholamines were markedly decreased (Table 1). At follow-up 12 mo after surgery, the patient was well without any signs of recurrence.

The tumor weighed 65 g and measured 6 cm × 7 cm. It was encased in a brownish capsule and contained a normal adrenal cortex attached to the upper part. The cut surface showed variegated white and red-brown areas, typical of a pheochromocytoma (Figure 1B). Histologically, large polygonal cells with eosinophilic granular cytoplasm were arranged in alveolar and anastomosing trabecular patterns invested by a fine fibrovascular stroma. Tumor cells showed prominent nucleoli and were strongly positive for chromogranin A on immunohistochemistry (Figure 1C).

There were no ganglioneuromatous figures. We then looked for the presence of VIP-positive cells. VIP immunoreactivity was found in some of the ganglion-like cells scattered among the predominant neoplastic cell population (Figure 1D). Since pheochromocytes did not show staining for VIP, it was assumed that VIP eventually released from these scattered cells could be responsible for the WDHA syndrome presented by the patient.

The WDHA syndrome is, although rare, a well-defined clinicopathologic entity that occurs most often in association with VIP-producing tumor. VIP is a 28-amino acid peptide that stimulates intestinal water and electrolyte secretion by activating adenylate cyclase and cyclic AMP in intestinal cells[4]. It is physiologically distributed in the digestive tract, the central and peripheral nervous systems, as well as in the adrenals[5]. VIP also inhibits gastric acid secretion, promotes hepatic glycogenolysis and hyperglycemia, and dilates peripheral systemic blood vessels[6]. When it is secreted in large amounts from endocrine tumors, the patient typically experiences massive secretory diarrhea, dehydration, flushing and weight loss[6]. Characteristic laboratory abnormalities include hypokalemia, achlorhydria, hypercalcemia, hyperglycemia and metabolic acidosis[6,7]. Unfortunately, we did not perform gastric analysis for acid secretion in our patient. However, it is now known that achlorhydria is not necessarily part of the WDHA syndrome and that hypochlorhydria or even normal acid secretion may occur[6,8].

The differences in these immunohistochemical findings have been partly explained by the neuronal differentiation of neoplastic cells. Both chromaffin cells and ganglion cells are derived from the neural crest and have in common a number of histochemical and biosynthetic characteristics, including amine precursor uptake and decarboxylation (APUD)[22]. Sano et al[23] suggested that tumor cells of hormone-producing neurogenic tumors can be divided into at least two cell populations: adrenergic neuron-related cells containing catecholamine and somatostatin, and cholinergic neuron-related cells containing VIP. Matsuoka et al[24] demonstrated in an experimental study that some factors in glioma-conditioned medium induced the cholinergic neuronal differentiation of rat pheochromocytes. Mendelsohn et al[25] immunohistochemically identified isolated VIP-containing cells that showed distinct ganglion cell differentiation in two of four pheochromocytomas without associated diarrhea. However, since pheochromocytes lacking ganglionic differentiation features may stain for VIP, it has been postulated that neoplastic transformation might elicit VIP synthesis by the tumor cells[13]. This could be consistent with the knowledge that neoplastic growth of APUD cells may produce several polypeptides or amines, which are characteristic not only of their specific differentiated cell types but also of associated APUD cells derived from the common neuroectoderm[6,26].

An interesting feature of this case was the absence of any hypertensive symptoms characteristic of pheochromocytoma. Most patients with pheochromocytoma complicated by WDHA syndrome remain normotensive despite high catecholamine levels. A certain proportion of patients with pheochromocytoma are indeed clinically “silent”[27], but, in our case, it is conceivable that VIP might have masked the symptoms of catecholamine overproduction by either its vasodilator effect or subsequent induction of secretory diarrhea and dehydration.

This case is an unusual presentation of pheochromo-cytoma in which diarrhea was the principal clinical sign. We suggest that, in a patient with chronic diarrhea of unknown etiology, it is important to perform not only gastrointestinal investigations but also abdominal ultrasound and/or CT scan to determine if a mass is present. When an adrenal mass is discovered, determination of catecholamines, as well as VIP is essential for a precise diagnosis even if the clinical symptoms are not characteristic of pheochromocytoma.

We acknowledge the contributions of Dr. Kurimoto to the diagnosis and management of this patient.