AIM: To define the association between Hashimoto’s thyroiditis and coeliac disease in Dutch patients.

The term autoimmune thyroid disease encompasses a number of different entities characterized by varying degrees of thyroid dysfunction and the presence of serum autoantibodies against thyroid tissue-specific components, such as thyroglobulin (TG) and thyroid peroxidase (TPO)[7]. Hashimoto’s thyroiditis is defined by the presence of high serum thyroid antibody concentrations (TG and/or TPO) accompanied by hypothyroidism[8] or goiter[9]. Likewise, several studies reported prevalences ranging from 10% to 30%[10-13] for autoimmune thyroid disease, and from 4 to 19% for Hashimoto’s thyroiditis in patients with coeliac disease[11-14].

Between May 1998 and May 2005, 184 adult patients with coeliac disease attending the Outpatient Department of Gastroenterology of Rijnstate Hospital were included in the study. All patients fulfilled the diagnostic criteria of the European Society of Paediatric Gastroenterology, Hepatology and Nutrition (ESPGHAN)[18]. During this period, coeliac disease was newly diagnosed in 77 patients (42%) while the other 107 patients (58%) had been already on gluten free diet for a mean period of 6.3 years (range 1-29 years). The general characteristics of patients with coeliac disease are also described in Table 1. At time of inclusion, coeliac serological tests, HLA-DQ typing and small intestinal biopsy were performed.

Thyroid biochemistry [thyroid stimulating hormone (TSH) and free thyroxin (FT4)] and thyroid antibodies [TG, TPO and if required thyroid stimulating immunoglobulin (TSI)] were determined in patients with coeliac disease. Patients with positive thyroid serology were further classified according to the American Thyroid Association Guidelines into overt hypothyroidism (elevated TSH and decreased FT4) and subclinical hypothyroidism (elevated TSH and normal FT4)[19]. Patients with positive thyroid serology and normal TSH were considered to have euthy-roid autoimmune thyroiditis[7]. Patients with positive thyroid serology and hypothyroidism were considered to have Hashimoto’s thyroiditis according to the study design. Patients were diagnosed with Grave’s disease when thyroid biochemistry (low TSH, high serum FT4), and radioactive iodine 131I thyroid scan were compatible with the diagnosis of Graves’ disease with or without the presence of TSI[20].

Serum thyroid antibodies including TG and TPO were detected by the automated immunoassays Immulite 2000 anti-TG Ab and Immulite 2000 anti-TPO Ab (Euro DPC Ldt, Llanberis, Gweinedd, UK)[25]. And 50 IU/mL and 45 IU/mL cut-off values for TG and TPO were employed respectively. TSI was detected by the LUMI test (TRAK human of BRAHMS, Berlin) with a cut-off value of 1.5 IU/L[26]. Serum AGA-IgA and AGA-IgG were measured by enzyme-linked immunosorbent assay (ELISA)[27], serum was diluted 1:100 and the results were expressed in Dutch units per millilitre (DU/mL) (CLB Amsterdam). Titres > 4 DU/mL and > 12 DU/mL were considered elevated for AGA-IgA and AGA-IgG, respectively. Serum TGA was determined by ELISA, as described by Dieterich et al[28] and was expressed as DU/mL using a Dutch reference serum (100 DU TGA/mL) for calibration with a cut-off value of > 5 DU/mL[29]. Serum EMA was determined by means of indirect immunofluorescence on frozen sections of commercial slides of primate ileum (EuroIMMUN) with a cut-off titre of > 8[27]. Seropositivity was defined when one or more of measured antibody tests were positive.

Whole blood was obtained for HLA-DQA1 and DQB1 genotyping. PCR-amplified exon 2 amplicons were gene-rated for low to medium resolution typing in a combined single-stranded conformation polymorphism (SSCP)/heteroduplex assay by a semi-automated electrophoresis and gel staining method on the PhastsystemTM (Amersham-Pharmacia-Biotech, Sweden). Alleles DQA1*05 and DQB1*02 (encoding the HLA-DQ2 heterodimer) and alleles DQA1*03 and DQB1*0302 (encoding the HLA-DQ8 heterodimer) could be reliably characterized in homozygous and heterozygous states. The method has been validated using a panel of reference DNA against the Dynall Allset+TM SSP high-resolution typing kits (Dynal AS Oslo, Norway)[30].

Small intestinal biopsies (at least 3-4) were obtained during upper gastrointestinal endoscopy from the third part of the duodenum with a spike forceps for histology[16]. An experienced pathologist (JWRM) did the evaluation of all biopsied material according to the modified Marsh classification[16].

The Ethical Committee approved the study protocol and all patients had given informed consent.

Continuous data having normal distribution are presented in means ± SD, and categorical data are presented in fre-quency rate and percentage. Comparison between groups was performed by two-tailed t test for continuous data, and Pearson Chi-Square (χ2) test with Yate’s correction in cross-tabulations for categorical data. Data not having a normal distribution were transformed (log) and analyzed subsequently. For all statistical analyses, a two-tailed P value < 0.05 was considered significant. The correlation coefficient for the age at diagnosis of coeliac disease and Hashimoto’s thyroiditis in the subgroup with both autoim-mune diseases was calculated by the Pearson method.

Sixteen (15%) of 104 patients with Hashimoto’s thyroiditis were positive for one or a combination of four coeliac serological tests. Eight patients, including three with coeliac disease, were positive in TGA, while six, including five with celiac disease were positive in EMA. Except one patient who declined endoscopy, small intestinal biopsy from the other 15 patients was normal in nine, characterized by intraepithelial lymphocytosis (MarshI) in one, and showed crypt hyperplasia and villous atrophy in five patients. These five patients with villous atrophy had gastrointestinal complaints (diarrhoea in four, and abdominal pain in one) that were resolved upon gluten free diet. Therefore, coeliac disease was newly diagnosed in five of 104 patients (4.8%; 95% CI 0.7-8.9) with Hashimoto’s thyroiditis (Figure 1). The coeliac specific HLA-DQ heterodimers were present in all five patients who had villous atrophy and in 50 patients with Hashimoto’s thyroiditis (50%; 95% CI 43-62). 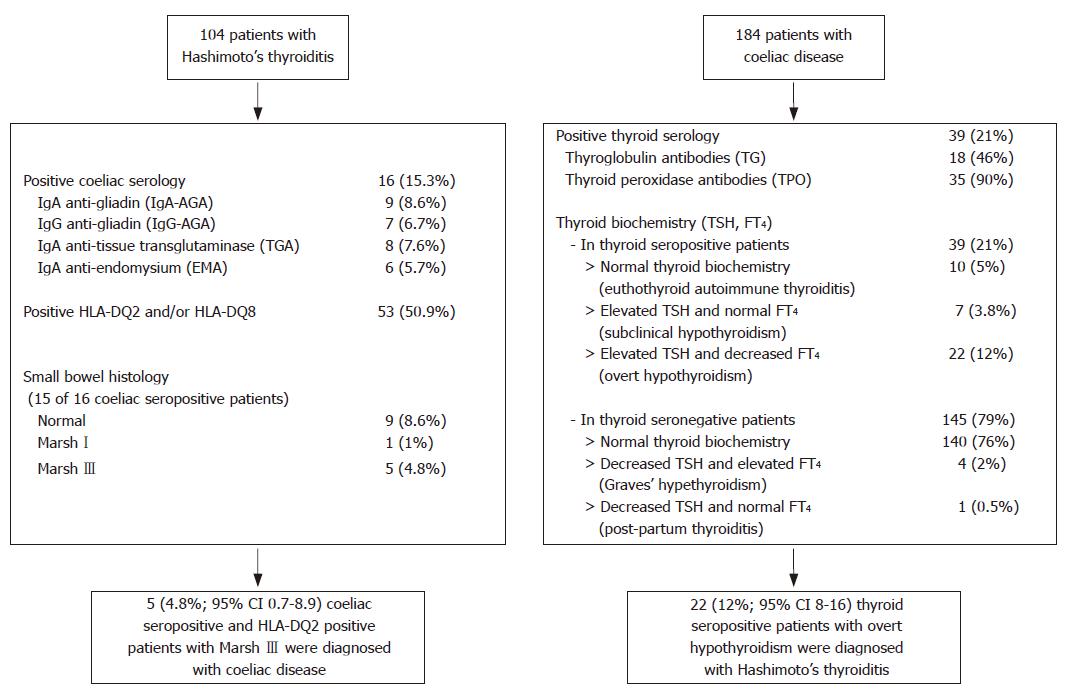 High serum thyroid antibody concentrations (TG and/or TPO) were found in 39 of 184 patients (21%; 95% CI 15-27) with coeliac disease. Of these thyroid seropositive patients, 10 (5%; 95% CI 2-9) had normal thyroid biochemistry and were considered to have euthyroid autoimmune thyroiditis. Seven patients (3.8%; 95% CI 1.8-7.6) had subclinical hypothyroidism. The other 22 patients (12%; 95% CI 8-16) had overt hypothyroidism in combination with positive thyroid serology. They were considered to have Hashimoto’s thyroiditis (Figure 1). All 22 patients were treated with thyroid hormone replacement therapy at a median dose of 50 μg/d (range 25-200 μg/d). Moreover, patients (2%; 95% CI 0.8-5) with coeliac disease had Graves’ disease, and one patient with coeliac disease had post-partum thyroiditis.

Patients with both Hashimoto’s thyroiditis and coeliac disease

The pooled sensitivity of TGA and EMA in adults is around 90% and 97%, respectively and the pooled specificity is around 95% and 100%, respectively[37]. It is indicated that patients negative to TGA or EMA could have been overlooked in the screening process. This outcome results from the inherent pitfall in the serological screening, and the difference between actual and the presumptive prevalence of coaliac disease among patients with Hashimoto’s thyroiditis (4.8% vs 5.5%). This difference can hypothetically be reflected by a presumptive number of 5.5 patients instead of actual number of 5 patients with coaliac disease in this study. Our findings, in agreement with pooled analysis[37], showed that EMA is better than TGA in screening for coeliac disease and is associated with less false positive cases as verified by small bowel histology, although others showed the opposite with marginal differences[38,39]. The difference in the diagnosis by serum antibody tests however, can be explained by the study design and other factors like different commercial kits with different performances[39].

In patients with coeliac disease, it is recommended to perform thyroid function tests at diagnosis and repeated later if necessary. Thyroid serological tests are helpful when thyroid function tests are abnormal. Another poten-tial role of thyroid serological tests might be to select individuals for regular surveillance of thyroid function. It must be emphasized however, that positive thyroid and coeliac specific serological tests might represent an epiphenomenon[55] because serum autoantibodies generally do not reflect per se a clinical autoimmune disease as demonstrated in this study. Therefore, caution must be taken to avoid misdiagnosis and unnecessary treatments.

This study was limited by its cross-sectional nature that could not provide data about the effect of gluten-free diet on thyroid biochemistry or thyroid serology in patients with Hashimoto’s thyroiditis and those newly diagnosed with coeliac disease. Although it is preferable to determine thyroid microsome antibodies rather than TG antibodies because the latter is non-specific[56]. In our study, we determined both TG and TPO to improve the serological tests.