AIM: To study the effect of retrorsine on mouse he-patocyte proliferation.

METHODS: Mice and rats were treated respectively with two injections of retrorsine (as retrosine-treated group) or saline (as non-treated group) at 2 wk intervals. They received a single injection of carbon tetrachloride (CCl4) 4 wk later. On d 0, 1, 2, 3, 4, 6, 15 after CCl4 administration, the animals were killed and their livers were excised. Hematoxylin and eosin (HE) staining and Ki-67 antibody immunohistochemical analysis of liver samples were used to evaluate the pathological changes and hepatocyte proliferation.

CONCLUSION: Retrorsine has no effect on mouse hepatocyte proliferation.

Hepatocyte transplantation can not only treat liver degenerative disorders and other serious liver injuries, but also replace liver transplantation[1,2]. Before clinical application, it is necessary to use an animal model to test whether exogenous liver cells can integrate and grow in the recipient liver. Observations in humans and other vertebrates demonstrated that native liver cells have a very high regenerative potential and outgrow the exogenous cells[3]. Therefore, in animal models for hepatocyte transplantation, it is very important to inhibit the proliferation of native hepatocytes. It has been reported that retrorsine, a member of the pyrrolizidine alkaloid (PAs) family can impair the proliferative capacity of mature hepatocytes. Retrorsine-induced block-ade is in G1/S, late “S” and /or “G2/M” phase of cell cycle[4-6]. Laconi et al.[4] reported that syngeneic transplantation of hepatocytes in liver of dipeptidyl-peptidase type IV-deficient (DPPIV-) rats treated with retrorsine could achieve 95% chimerism and restore its normal function. Although retrorsine has been used in rat model, there are very few reports on its use to create a mouse model for hepatocyte transplantation[7]. In this study, we investigated the effect of retrorsine on mouse mature hepatocytes. The results indicate that retrosine cannot inhibit mouse hepatocyte proliferation after liver injury.

Retrorsine (Sigma-Aldrich) was added to distilled water at 10 mg/mL and titrated to pH 2.5 with 1 mol/L HCl to dissolve it completely. The solution was neutralized using 1 mol/L NaOH. Subsequently NaCl was added. The final concentration was 5 mg/mL retrorsine and 0.15 mol/L NaCl, pH 7.0. The working solution was used immediately after preparation.

After one week of acclimatization, the mice and rats were randomly divided into two groups and received two intraperitoneal injections of retrorsine (70 mg/kg for mice[7] and 30 mg/kg for rats[4,6] (as retrosine-treated group)) or saline (as non-treated group) at 2-week interval. Four weeks after the second injection, diluted CCl4 was respectively injected into mice and rats, ip 5 mL/kg[7]. Day 0 was set just before CCl4 injection. On days 1, 2, 3, 4, 6, and 15 after CCl4 administration, 3-5 animals from each group were killed. The liver of animals was excised and fixed in 40 g/L formaldehyde for the following study.

Samples were dehydrated in alcohol and embedded in paraffin. Sections were cut at 5 µm thickness. For pathological analysis, the liver sections were stained with hematoxylin and eosin (HE) according to the standard procedures.

For Ki-67 immunohistochemical staining, antigen retrieval was carried out by incubating slides in antigen retrieval buffer (0.01 mol/L citrated buffer, pH 6.0) at 95 °C for 30 min. The slides were incubated with the primary antibody, Ki-67，at 4°C overnight. The secondary antibody used was anti-rabbit conjugated with horseradish peroxidase (Jackson Immunoresearch). 3,3-diaminobenzidine tetrahydro-chloride containing 0.1g/L hydrogen peroxide was used as a substrate. The proportion of Ki-67 positive hepatocytes was counted from at least 2000 cells from serial fields for each sample under microscope with 20× magnifications.

Data were expressed as mean±SE. Sigmaplot 2001 and SAS for windows 6.12 softwares were used for data analysis and plot. The significance of variances was found to be appropriate by Student’s t- test or χ2 test. 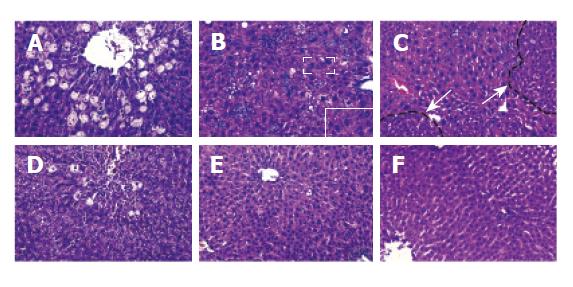 Livers of both retrorsine-treated and non-treated groups showed necrosis in perivenous areas on day 2 after CCl4 injection. After then hepatocytes in periportal areas began to proliferate, mitotic figures of liver cells could be found. Such a pathological phenomenon might be due to destruction of CCl4 in liver[9,10]. There were no megalocytosis and other pathological changes in rats. On the 15th day, hepatic parenchyma in both groups became normal (Figure 2). 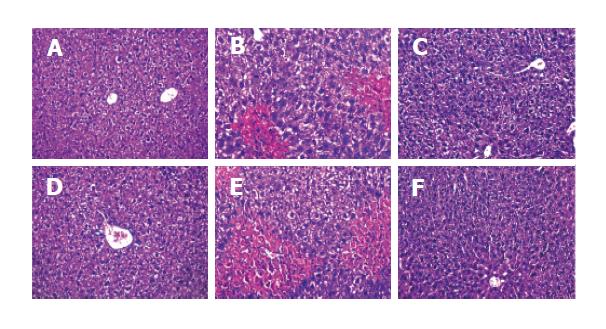 Figure 2 Pathological changes of mouse liver. A and D: No obvious morphological abnormity. B and E: Necrosis in perivenous areas, arrow indicates the mitotic figure of hepatocytes. C and F: Hepatic parenchyma in both groups became normal.
Ki-67 immunohistochemical analysis 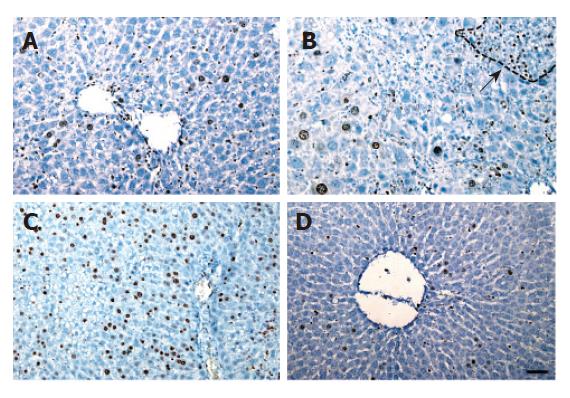 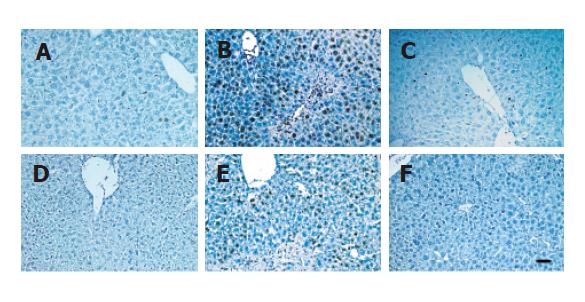 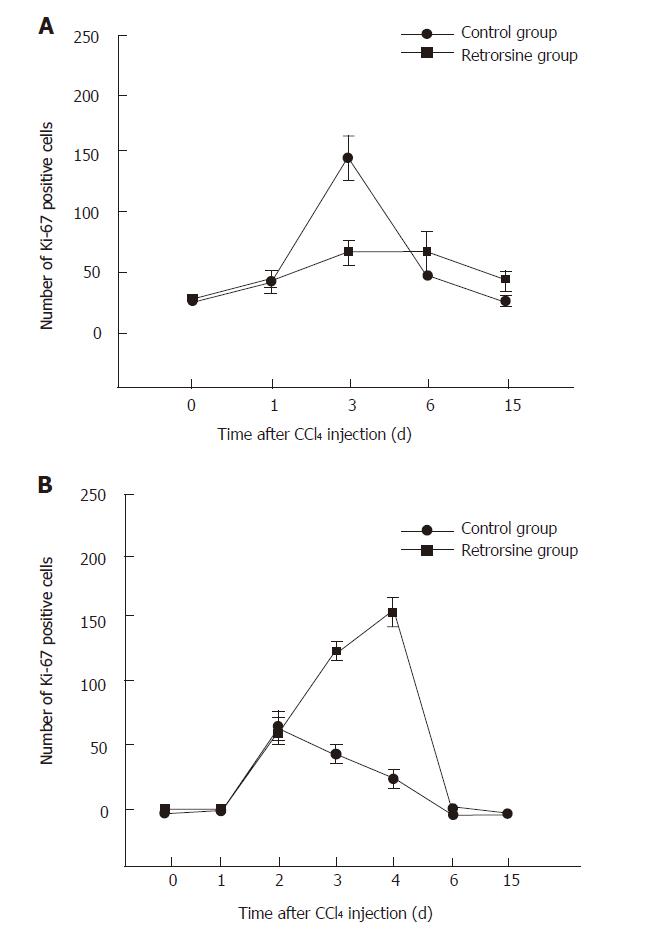 Figure 5 Kinetics of Ki-67 expression in rats (A) and mice (B) after CCl4 injection. A: The maximum number of Ki-67 positive hepatocytes on day 6 after injection of CCl4 in retrorsine-treated rats and on day 3 in non-treated group. B: The number of Ki-67 positive hepatocytes in retrorsine-treated mice was higher than that in non-treated group delayed. aP < 0.05, bP < 0.01, cP < 0.001 vs control group.

The present study described the comparative pathological changes and kinetic of hepatocyte proliferation in mice and rats treated with retrorsine and CCl4. Guo et al [7] reported that two doses of retrorsine (70 mg/kg at 2 wk interval) could be tolerated by > 90% of mice. If the dosage is over 70 mg/kg, the mortality rate of animals would increase. We used this dosage in our experiments and tested ethanol or water as a solvent for retrosine and treated mice with the same dosage (70 mg/kg). The survival rate was 85% (22/26) and 84% (27/32), respectively. No statistically significant difference was displayed between them (χ2 = 0.001, P = 0.980), suggesting that only water can be used as a solvent for retrosine.

The rats treated with retrorsine and CCl4 showed megalocytosis, mild bile duct proliferation and small hepatocyte proliferation-formed nodules. This phen-omenon has been described by many authors[4,6,12-15]. But in mice treated with the same protocol, we did not find similar pathological changes. Guo et al[7] studied liver repopulation after cell transplantation in mice treated with retrorsine and CCl4, and found that there are no liver pathological changes.

Retrorsine has long been known for its ability to block hepatocyte division[4-6]. Megalocytosis results from replicating hepatocytes which are blocked after DNA synthesis and prior to mitotic division, thus resulting in a large number of cells with enlarged nuclei (megalocytosis)[4,6,17]. Our results demonstrated megalocytosis was only present in livers of rats but not in livers of mice treated with retrorsine, indicating that the effect of retrorsine on mice is different from that on rats. Significant species difference in susceptibility to PAs intoxication has been reported, which is mainly due to the variations in balance between the formation of toxic metabolites and detoxification pathways[18-20]. Although both mice and rats belong to murine, they might have a different process of metabolism or detoxification of PAs in their livers, which may lead to resistance of mice to retrorsine. Moreover, rats receiving CCl4 2 wk after the second injection of retrorsine displayed higher mortality rate than those receiving CCl4 4 wk after the second injection of retrorsine (data not shown). There was no obvious difference in the mortality rate and other physiological indices in mice receiving CCl4 2 wk or 4 wk after the second injection of retrorsine, which proved our hypothesis that retrorsine could seriously injure rat liver but not mouse liver.

The authors thank Dr. Aditi Karandikar for reading the manuscript, Yong Lu and Nan Zheng for their assistance in handling rats and mice, and Fan Tang for her technical assistance.