AIM: To investigate the effect of arg-gly-asp-mannose-6 phosphate (RGD-M6P) on the activation and proliferation of primary hepatic stellate cells in vitro.

METHODS: Hepatic stellate cells (HSCs) were isolated from rats by in situ collagenase perfusion of liver and 18% Nycodenz gradient centrifugation and cultured on uncoated plastic plates for 24 h with DMEM containing 10% fetal bovine serum (FBS/DMEM) before the culture medium was substituted with 2% FBS/DMEM for another 24 h. Then, HSCs were cultured in 2% FBS/DMEM with transforming growth factor β1, M6P, RGD, or RGD-M6P, respectively. Cell morphology was observed under inverted microscope, smooth muscle α-actin (α-SMA) was detected by immunocytochemistry, type III procollagen (PCIII) in supernatant was determined by radioimmunoassay, and the proliferation rate of HSCs was assessed by flow cytometry.

RESULTS: RGD-M6P significantly inhibited the morphological transformation and the α-SMA and PCIII expressions of HSCs in vitro and also dramatically prevented the proliferation of HSCs in vitro. Such effects were remarkably different from those of RGD or M6P.

CONCLUSION: The new compound, RGD-M6P, which has a dramatic effect on primary cultured HSCs in vitro, can inhibit the transformation of HSCs in culture caused by TGFβ1, suppresses the expression of PCIII and decreases proliferation rate of HSC. RGD-M6P can be applied as a selective drug carrier targeting at HSCs, which may be a new approach to the prevention and treatment of liver fibrosis.

Liver fibrosis is characterized by an excessive deposition of extracellular matrix constituents, resulting from an enhanced synthesis of matrix proteins (fibrogenesis) and decreased removal by matrix degrading enzymes (fibrolysis) in consequence of liver cell damage of various causes[1-3]. The major cell type responsible for hepatic fibrogenesis is the activated hepatic stellate cells (HSCs). Therefore, this cell type is an important target for antifibrotic therapy[4,5]. Pharmacotherapeutic intervention to alter HSC functions may act at different levels: inhibition of activation and transformation of HSCs, inactivation of profibrogenic cytokines, interference with matrix synthesis and stimulation of matrix degradation[6-11]. In vivo, however, antifibrotic drugs may not be efficiently taken up by HSCs or may produce undesirable side effects. Drug targeting may be explored to elicit cell-specific uptake of drugs, but in contrast to other cell types in the liver, a specific carrier agent to go into HSCs is not yet known[12]. Therefore, we focused on the development of a specific carrier for HSCs. The binding sites expressed on activated HSCs were considered for their ability to serve as potential targets for carrier molecules. Two of these are integrin and mannose 6-phosphate/insulin like growth factor II (M6P/IGF-II) receptors, which are over-expressed on activated rat HSCs, particularly during fibrosis[13,14]. Additionally, extracellular matrixes (ECM) regulate the morphology and biological activities of HSCs through integrins on the cell membrane[13]. It has been certified that the RGD sequence plays a vital role in the linkage between ECM and integrins[13]. This study was to synthesize a new compound, RGD-M6P targeting at integrins and/or M6P/IGF-II receptors over-expressed on activated HSCs and to study its effects on the activation and proliferation of primary cultured HSCs in order to find a new approach for regulating HSC activation and anti-hepato-fibrotic therapy. If successful, this may be of value in the design of other receptor-specific carriers.

Isolation of HSCs and grouping

HSCs were isolated and cultured. Briefly, the rats were anesthetized with an intraperitoneal injection of pentobarbital. After cannulation into the portal vein, the liver was perfused with calcium-free balanced NS containing 0.5 mg/mL collagenase and 1 mg/mL pronase E. Then the liver was removed, cut into small pieces and incubated in a solution containing 0.5 mg/mL collagenase. After washed, HSCs were purified by density gradient centrifugation with 18% Nycodenz, collected from the top layer, washed and suspended in DMEM supplemented with 10% FBS at the concentration of 1×106 cells/mL，and seeded on uncoated 24-well plastic plates at 1×105/well supplemented with 20% FBS/DMEM for 24 h. Then the HSCs were subjected to tetrandrine treatment after cultivation in 2% FBS/DMEM for another 24 h. Over 90% of isolated HSCs were viable as assessed by trypan blue exclusion with a purity of higher than 90% as determined by direct cell counting under a phase-contrast microscope and intrinsic vitamin A autofluorescence.

HSCs were cultured on 24-well plates with different treatments as described above. HSCs were fixed with ethanol/acetic acid after 5 d of treatment. α-SMA antibody, horse radish peroxidase-conjugated secondary antibody and diaminobenzidine were added sequentially according to the standard protocol. Semi-quantitative assessment of protein expression was performed using pathological image analysis system. The expression of α-SMA was estimated by gray value.

PCIII in supernatant was measured with a radioimmunoassay kit according to the manufacturer’s instructions.

The cell cycle was analyzed by flow cytometry to assess the proliferation rate of HSCs. Adherent and floating cells were collected from a 6-well plate, centrifuged and washed twice with PBS at room temperature. Cell pellets were re-suspended in ice-cold 70% ethanol for overnight fixation at 4 °C, centrifuged and re-suspended in 0.8 mL PBS. One microlitre 10 mg/μL RNase and 20 μL propidium iodide (1 mg/mL)were added and samples were incubated at 37 °C for 30 min before analysis by flow cytometry using a Beckman Coulter FC500. Proliferation was quantitatively measured as the percentage of cells in the G2/M phase.

All data were expressed as mean±SD. Statistical analysis of values was performed with SPSS software (10.0 version). P < 0.05 was considered statistically significant.

Over 90% of isolated HSCs were viable as assessed by trypan blue exclusion, which were small and round in appearance (Figure 1A). HSCs stimulated by 327 nm-length laser, showed a blue-green intrinsic autofluorescence due to vitamin-A rich droplets. After cultured for 72 h, HSCs presented a wall-adhesive growth pattern and many spindle-like or asteroid membranous processes and a reduction of vitamin-A droplets (Figure 1B). Overall, these findings indicated that HSCs freshly isolated from normal rats showed an activated form after 5 d of in vitro culture.

Figure 1 Small and round HSCs in the presence of vitamin-A droplets in cytoplasm (A) and spindle-like or asteroid membranous processes in HSCs (B).
Expression of α-SMA in culture-activated HSCs

Immunocytochemical assay was used to evaluate the percentage of α-SMA-positive HSCs in different groups. The percentage of α-SMA-positive HSCs was significantly higher in TGFβ1 and M6P groups (Figures 2B and 2C) than in control, RGD and RGD-M6P groups (Figures 2D and 2E). Even condensed α-SMA positive granules could be found (Figure 2B). No difference was found in the immunohistochemical study between RGD and RGD-M6P groups (Figure 2F). The cytomorphology study showed that the primary isolated HSCs were positive for α-SMA and the positivity was intensified through auto-activating characteristics of HSCs in vitro. Additionally, RGD and RGD-M6P could inhibit the activation of HSCs stimulated by TGFβ1.

PCIII is the most acceptable parameter of fibrogenesis as compared to other ECM contents, such as collagens I, III,IV, fibronectin, laminin and proteoglycans[15,16]. The level of PCIII in the control group was lower than that in the other groups (P < 0.01, Table 1), and higher in TGFβ1 and M6P groups than in RGD and RGD-M6P groups. No difference was found in the level of supernatant PCIII between RGD and RGD-M6P groups. The results showed that the effect of RGD-M6P was better than that of M6P on inhibiting PCIII expression after stimulated by TGFβ1. 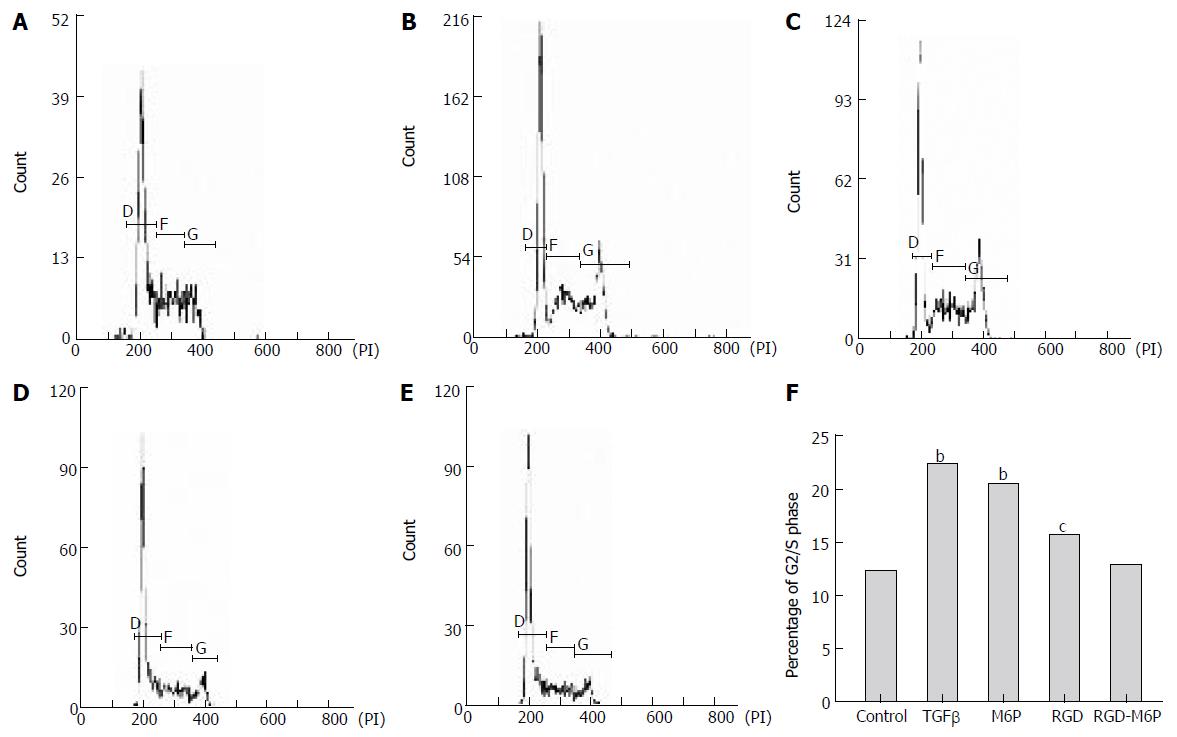 In the past decade, significant advances have been made in anti-fibrosis therapy due to a better understanding of the cellular and molecular mechanism of hepatic fibrogenesis[1-3,8]. The key factors in the pathogenesis of liver fibrosis include the activation and proliferation of HSCs and their transformation into myofibroblasts[5]. Therefore, HSCs are the important target for antifibrotic therapies[4,12,17,18]. However, contrary to in vitro data, in vivo studies[13,14,19] demonstrated that most antifibrogenic agents cannot be efficiently taken up by HSCs and the binding sites expressed on (activated) HSCs can serve as potential targets for carrier molecules. Two of these are integrin and M6P/IGF-II receptors and their expressions are increased on activated rat HSCs, particularly during fibrosis. Some anti-fibrotic reagents targeting at HSCs have been developed[12,20], which allow cell-specific delivery of antifibrotic drugs to HSCs, thus enhancing their effectiveness in vivo.

Specific interactions between cells and ECM components are mediated by transmembrane proteins, especially heterodimeric integrins. Cell-matrix interactions guide or modulate cellular activities, such as adhesion, migration, differentiation, proliferation, and apoptosis[13]. Most integrins can recognize and bind to the amino acid sequence of RGD present in various matrix proteins. The expression of integrins is increased during liver fibrosis, especially on the membrane of activated HSCs, suggesting that integrins can be used as a homing device to target at HSCs in fibrotic livers[19,21]. About 10%-20% of M6P/IGF-II receptors are expressed in cell membrane and over-expressed with the activation of HSCs[14]. It was reported that integrin antagonists can reduce the level of serum PCIII in fibrotic rats and inhibit the stimulating action of TGFβ1 on ECM expression[22-24]. Beliaars et al[25,26] showed that M6P-modified albumin accumulates in slices of normal and fibrotic liver and is taken up by HSCs. In the present study, we synthesized RGD-M6P and investigated its effects on the activation and proliferation of the primary HSCs in vitro.

The isolated primary HSCs in culture undergo auto-activation[27]. During this process, the expression of α-SMA is raised[28] and HSCs transform into fibroblast-like cells with increased proliferating activity[27], which might lack microenvironment in vitro. HSCs supplemented with TGFβ1 put forth more processes on their cell membrane, and the supernatant PCIII level is increased[29,30]. At the same time, the proliferation of HSCs is increased. Both RGD and RGD-M6P could inhibit the effect of TGFβ1 on the activation and proliferation of HSCs as well as PCIII expression. Though the M6P molecule participates in the activation of latent TGFβ1[31], it can be used as a candidate in the study of anti-fibrosis. In the present study, we could not find its anti-fibrosis activity because M6P acted on the activated TGFβ1 rather than the latent form. Moreover, RGD-M6P may have a more effective anti-fibrotic activity than RGD because RGD-M6P targets at the integrin and M6P/IGFII receptors on HSC membrane, thus more effectively modulating the HSC activity. But our present results failed to support the hypothesis. Further study is needed to explore the precise mechanism of this new complex.