AIM: To determine whether neutrophil depletion and Kupffer cell inhibition might combine their protective effects to decrease the severity of acute pancreatitis.

METHODS: Mice had cerulein administration to induce acute pancreatitis and were pretreated with either anti-mouse neutrophil serum or gadolinium chloride (GdCl3) to prevent Kupffer cell activation, or both treatments. Injury was assessed in pancreas and lungs. Myeloperoxidases (MPO) assessed neutrophil infiltration. Interleukin-6 (IL-6) and IL-10 were measured in serum, pancreas, lungs and liver.

CONCLUSION: Our results confirm the role of activated neutrophils in aggravating organ injury in acute pancreatitis while the role of Kupffer cell activation is less obvious.

During acute pancreatitis, the pathophysiology of pancreatic injury includes inflammatory processes and, following early activation of trypsinogen in acinar cells, recruitment of inflammatory cells aggravates pancreatic damage[1,2]. Upon activation, circulating inflammatory cells adhere to vascular endothelial cells and transmigrate across the endothelial barrier within injured areas in pancreas as well as in remote organs. Thus, mice deficient in adhesion molecules such as intercellular adhesion molecule 1 (ICAM-1)[3] on endothelial cells or animals treated with an antineutrophil serum (ANS)[3,4] are protected from pancreatitis and remote injuries. However, the protection remained incomplete[3,4].

In contrast to the severe lung injury frequently associated with pancreatitis, hepatic injury is minor during acute pancreatitis[5]. Nevertheless, hepatic functions are modified by pancreatitis. Detoxification is altered early in the evolution of the disease[6,7] and this decreased hepatic detoxification is compensated by an increased detoxification in blood, lungs, and intestine macrophages[7]. Moreover, mediators released from the damaged pancreas directly activate Kupffer cells and promote important inflammatory responses in the liver. Elastase administration, either in the peritoneum[8] or in perfused livers[9] mimics this important inflammatory response. The role of the liver in acute pancreatitis is then to propagate pancreatic injury to lungs. Portocaval shunts (that dilute harmful pancreatic mediators in the systemic circulation)[5,10] and inhibitors of Kupffer cell activation such as gadolinium chloride (GdCl3)[11] and liposome-encapsulated dichloromethylene diphosphonate (DMDP)[12] decrease acute pancreatitis-associated-lung injury.

Because neutrophil depletion or prevention of Kupffer cell activation is only partially effective in decreasing the severity of acute pancreatitis, the aim of our study was to determine whether both treatments might combine their protective effects.

Breeding pairs of C57BL6 mice were purchased from Charles River (Saint-Germain sur l’Arbreles, France) and bred and housed in temperature-controlled (23 ± 2 °C) cages with a 12 h light/dark cycle. They were fed with standard laboratory chow, given water ad libitum, and randomly assigned to control or experimental groups. The experimental protocol was reviewed and approved by the Ethics Committee for Animal Research of the University of Geneva and the Veterinary Office in Geneva and followed the guidelines for care and use of laboratory animals.

Male mice (20-22 g) were intraperitoneally injected hourly for 10 h (10 injections) with a supramaximally stimulating dose of cerulein (CER, 50 µg/kg in 0.2 mL saline solution) to elicit a secretagogue-induced pancreatitis. Cerulein, the analog of the pancreatic secretagogue cholecystokinin was purchased from Research Plus (Bayonne, NJ, USA). Control (CONT) mice were injected with saline solution. One hour after the final injection, mice were sacrificed by a lethal intraperitoneal injection of pentobarbital.

At the time of sacrifice (1 h following the last cerulein injection), blood was collected from the heart, centrifuged for 10 min, and the serum was kept at -80 °C until assayed. Serum amylase activity was measured using 4,6-ethylidene (G1)-p-nitrophenyl (G1)-αD-malto-heptoside (Sigma Chemical Company, St. Louis, Missouri) as substrate.

To quantify pancreatic edema, part of the pancreas was removed to measure tissue water content. Pancreatic tissue was weighed before and after desiccation at 95 °C during 24 h. The difference between the wet and dry tissue weights was calculated and expressed as a percent of tissue wet weight. The other parts of pancreatic tissues were frozen in liquid nitrogen for cytokine measurements.

Neutrophil sequestration within pancreas was detected by measuring tissue myeloperoxidase activity (MPO)[13]. Pancreatic samples were thawed, homogenized in 1 mmol/L in 20 mmol/L phosphate buffer (pH 7.4), centrifuged (10 000 g, 10 min), and the resulting pellet was resuspended in 50 mmol/L phosphate buffer (pH 6.0) containing 0.5% hexadecylmethylammonium bromide. The suspensions were subjected to four cycles of freezing and thawing and sonicated. The samples were centrifuged (10000 g, 5 min) and the supernatants were used to measure MPO activity. The reaction solution included 1.6 mmol/L tetramethylbenzidine (Sigma, Switzerland), 80 mmol/L sodium phosphate buffer (pH 5.4) and 0.3 mmol/L hydrogen peroxide (Sigma, Switzerland). Samples in solution were incubated at 37 °C for 2 min and the absorbance was read by an autoanalyzer. MPO activity was expressed as U/mg tissue dry weight.

Pulmonary microvascular permeability was evaluated by quantitating the leakage of intravenously injected fluorescein isothiocyanate (FITC)-labeled bovine albumin (0.5 mg/kg in 0.2 mL) into the bronchoalveolar space (BAL)[14]. Immediately after sacrifice, the trachea was exposed and the lungs were injected three times with saline solution (1 mL). The lavage fluid was collected and FITC fluorescence was measured in the lavage fluid and serum using a Hitachi fluorospectrophotometer (excitation wave: 494 nm; emission wave: 520 nm). The ratio of fluorescence between BAL and blood was calculated and expressed the pulmonary permeability index.

Interleukin-6 (IL-6) and interleukin-10 (IL-10) were quantified in serum, pancreas, lung and liver using the commercially available enzyme linked immunosorbent assay kits (R&D, Abingdon, UK). Freshly isolated tissues were homogenized in 1.5 mL phosphate buffer (20 mmol/L, pH 7.4). After centrifugation (14 000 g for 5 min at 4 °C), IL-6 and IL-10 concentrations were measured in the supernatant according to the manufacturer’s recommendations and expressed as pg per mg proteins in tissues and pg/mL in serum. The mean concentrations of IL-6 and IL-10 measured in CER mice served as the 100% baseline values.

At the time of sacrifice, pancreatic tissues were rapidly removed, fixed in 4% neutral phosphate-buffered formalin, embedded in paraffin, and sectioned (5 µm). After staining with hematoxylin-eosin, sections were examined by two morphologists who were not aware of the sample identity. The extent of acinar cell necrosis was quantified by computer-assisted morphometry and expressed as a function of total acinar tissue. Acinar cell necrosis included destruction of normal pancreatic architecture in combination with inflammation. After exclusion of non-acinar cells (islets of Langerhans and perivascular and periductular adventitial tissue), the amount of acinar necrosis were morphometrically quantified using a computerized image analysis video unit (Zeiss Camera, Zeiss, Bern, Switzerland).

For pulmonary morphology, a polyvinyl catheter was inserted into the trachea and used to instill 4% neutral buffered formalin into the lungs with a hydrostatic pressure of 30 cm H2O. Formalin-distended lungs were harvested, fixed, paraffin-embedded, sectioned (5 µm) and stained.

Data are median [minimum - maximum] and differences between groups were analyzed by Mann-Whitney test (comparison between CONT and CER mice) or Kruskal-Wallis and Dunn posthoc tests (comparisons between CER, CER + ANS, CER + GdCl3, and CER + ANS + GdCl3). A P value < 0.05 was considered significant. 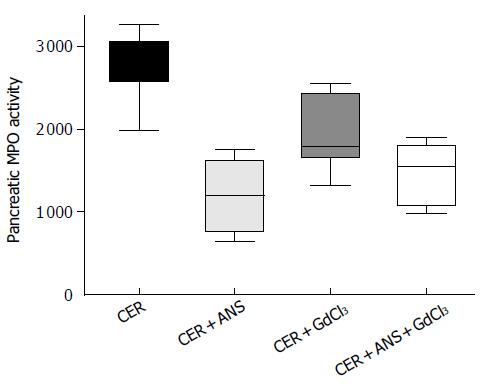 Figure 3 Representative sections of pancreas (upper panels) and lung (lower panels) stained with hematoxylin and eosin. Mice were injected with saline solution (CONT, A and F), cerulein (CER, B to E and G to J) and treated with antineutrophil serum (CER + ANS, C and H), gadolinium chloride (CER + GdCl3, D and I) or both treatments (CER + ANS + GdCl3, E and J). These illustrations represent sections from ≥ 3 mice. Magnification x400.

Because acute pancreatitis is frequently associated with injury in remote organs, we determined the consequences of both treatments on lung injury. CER administration increased pulmonary MPO activity and the pulmonary permeability index (Table 2). Lung injury is also evidenced by a marked thickening of the alveolar-capillary membrane (Figure 3). 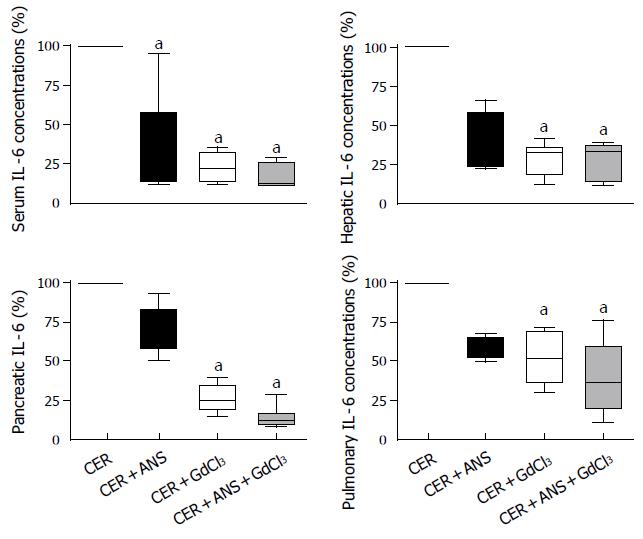 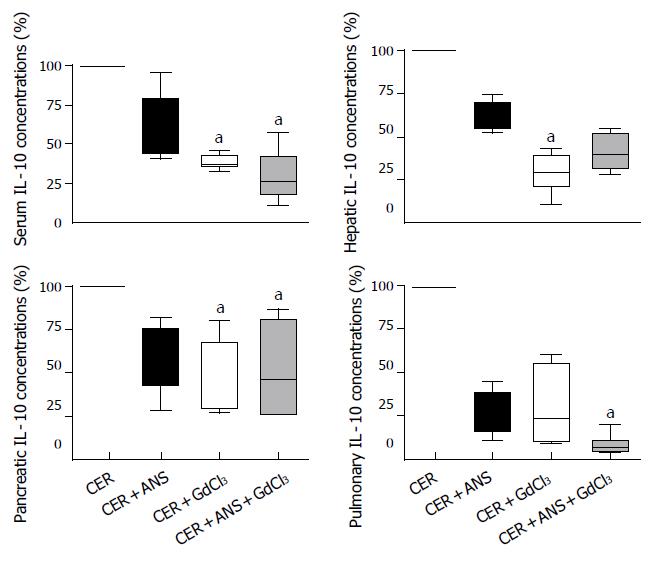 Neutrophil infiltration in pancreas and lungs

Following cerulein injections in mice, neutrophil infiltration (assessed by MPO activity) was observed 12 h after the first injection. However, we previously showed that MPO activity peaks later by 24 h in pancreas and 36 h in lungs after the first injection and remains elevated by d 7[14]. This neutrophil infiltration in tissues plays an important role in the development of acute pancreatitis and pancreatitis-associated lung injury. Thus, mice deficient in adhesion molecules such as intercellular adhesion molecule 1 (ICAM-1) on endothelial cells[3] or animals treated with an antineutrophil antibody[3,4] are protected from pancreatitis and remote injuries. However, the protection remained partial[3,4]. This incomplete protection suggests that either the dose of ANS used is insufficient to completely remove all neutrophils or that additional pathways must be targeted to obtain a full protection. We previously showed that ANS injection (0.2 mL) in mice reduced the circulating neutrophils by 85%[3] while 0.5 mL/100 g in rats decreased the circulating neutrophils to below 200 cells/mL[4]. Thus, neutrophil depletion with ANS is correct and the residual MPO activities in lungs and pancreas after ANS treatment (Figures 2 and 4) might reflect the presence of local macrophages. An incomplete protection by ANS has already been shown in mice[3] or rats[4] treated with cerulein. Consequently, an additional independent pathway, Kupffer cell inactivation, was targeted to further prevent acute pancreatitis.

Role of the liver in acute pancreatitis

The role of the liver in propagating pancreatic injury to lungs has been evidenced by inactivating Kupffer cell or diverting blood from the pancreatic vein to the systemic circulation. Thus, portocaval shunts (that dilute harmful pancreatic mediators in the systemic circulation)[5,10] and inhibitors of Kupffer cell activation such as gadolinium chloride (GdCl3)[11] and liposome-encapsulated dichloromethylene diphosphonate (DMDP)[12] significantly decrease acute pancreatitis-associated-lung injury. As expected, we showed that GdCl3 pretreatment decreased IL-6 and IL-10 concentrations in the liver (Figures 5 and 6). In isolated rat livers, perfusion of pancreatic elastase activates Kupffer cells with subsequent NF-κB activation and TNF-α overproduction and this effect is abolished by GdCl3 pre-treatment[9]. GdCl3 is specifically taken up by Kupffer cells and is not toxic by itself (when the injected dose is 100 mg/ kg, iv), as previously published by Gloor et al[15]. However, in our study, the pulmonary permeability index and MPO activity were not significantly decreased in comparison to CER mice (Figure 4). Pulmonary IL-6 concentrations in CER + GdCl3 mice were lower than in CER mice but the IL-10 concentration decrease did not reach significance.

GdCl3 pretreatment also decreased serum IL-6 and IL-10 concentration as previously published[15]. In contrast to Gloor et al[15] we found that GdCl3 also decreased pancreatic IL-6 and IL-10 concentrations, as well as serum amylase concentration. Pancreatic necrosis, water content, and pancreatic MPO were not different between CER + GdCl3 mice and CER mice, as previously described[15]. Our results either question the specific inactivation of hepatic macrophages by GdCl3 or suggest that the decreased cytokine concentrations in pancreas reflect a decreased systemic inflammatory response. In a severe form of acute pancreatitis, GdCl3 pretreatment was able to reduce the mortality rate[15]. The beneficial effect of GdCl3 on the mortality rate remains puzzling because GdCl3 administration decreases IL-10 concentrations, a cytokine which has a protective effect on the evolution of acute pancreatitis[16,17].

Kupffer cell inactivation has also been induced by other drugs such as liposome-encapsulated dichloromethylene diphosphonate which decreases apoptosis and TGF-β production in liver[12] or CNI-1493 which reduced pancreatitis-associated liver injury through TNF-α and IL-1 expression[18].

In conclusion, our results confirm the role of activated neutrophils in aggravating organ injury in acute pancreatitis while the role of Kupffer cell activation is less obvious. Another more early event should probably be targeted in combination with neutrophil depletion to fully prevent the initiation of the disease.