Tuberculosis (TB) is a very rare cause of biliary stricture that is difficult to diagnose and usually requires surgical intervention in order to rule out underlying malignant etiology. We report a 56-year-old man presented with jaundice, weight loss and poor appetite. Initial work up showed the dilated biliary system secondary to distal common bile duct stricture. Investigations to define the etiology of this stricture showed inconclusive brush cytology with absent abdominal masses and lymph nodes but enlarged mediastinal lymph nodes. Biopsy from these lymph nodes showed a non-caseating epitheliod granuloma with negative acid fast bacilli (AFB) stain. The patient had a dramatic response to empirical anti-tuberculosis therapy. Six weeks later, culture from lymph nodes was positive for Mycobacterium tuberculosis.

Three months later, follow-up cholangiogram showed complete resolution of the stricture with normalization of liver enzymes 6 mo after starting anti-tuberculosis therapy. Treatment was continued for 12 mo and the patient had a normal life with normal liver enzymes and regression of the mediastinal lymph nodes at the time when he was reported in this paper.

Although tuberculosis (TB) of the hepatobiliary system is not uncommon, it is an extremely rare cause of biliary stricture. Many cases of lymph node, gall bladder, duodenal and pancreatic tuberculosis are reported[1-5], but only sixteen cases of biliary stricture caused by tuberculosis are available in the English literature[6-16], and only one case has been reported from the Middle East[13]. The main symptoms of TB biliary stricture including jaundice and weight loss are usually indistinguishable from those of other diseases such as cholangiocarcinoma. Although the presence of past history or chest X-ray changes of tuberculosis may raise the suspicion of this etiology, most of the reported cases are diagnosed based on surgical pathology. We report here a middle age gentleman who had tuberculous biliary stricture with an excellent outcome after anti-TB therapy alone.

A previously healthy 56-year-old Saudi male presented with a 4-mo history of fatigue, 15 kg weight loss, poor appetite, pruritus, progressive jaundice, dark urine, and pale stool. He had no history of fever, night sweat, alcohol or herbal medicine use. Past history was negative for TB, gall bladder or biliary disease or abdominal surgery.

Physical examination revealed that he was afebrile and thin with a body mass index of 19 kg/m2, muscle wasting, deep yellow sclera, no palpable lymph nodes or stigmata of chronic liver disease. Abdominal examination showed palpable liver with a span of 9 cm and moderate ascites, and nor remarkable findings in other systems. 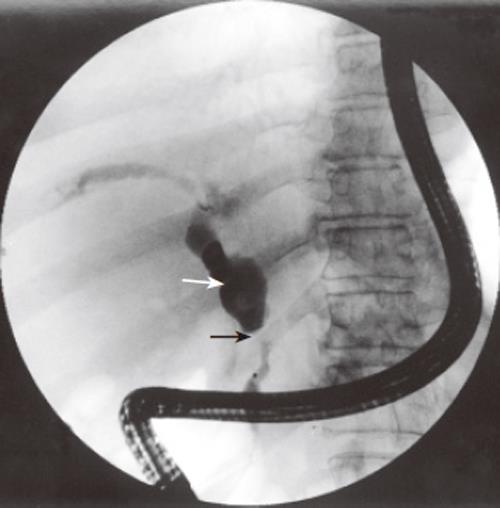 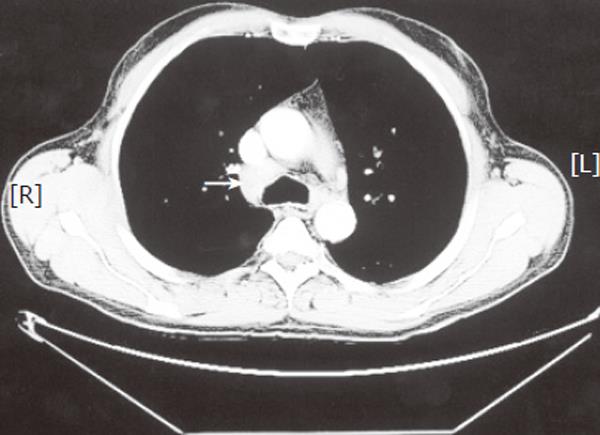 Cholangiocarcinoma was found with probable mediastinal lymph node metastasis. However, given this location of lymph nodes, other possibilities such as lymphoma, tuberculosis or infiltrative diseases should be excluded.

Figure 3 Hematoxylin and eosin (H and E) staining of liver tissue (A) and mediastinal lymph node (B) showing bile pigments (thick arrow) with bile duct proliferation (thin arrow) and inflammatory cell infiltrate and epethelioid granuloma with many langerhans cells but no caseation (arrows).

These results indicated that the most likely cause of liver cirrhosis was previous exposure to hepatitis B infection.

Then patient underwent mediastinoscopy with lymph node excisional biopsy, which showed epithelioid granuloma with numerous langerhans cells but no caseation (Figure 3B). Z-N stain was negative for acid fast bacilli and biopsy was sent for TB culture.

Three months after starting the anti-tuberculous therapy, repeated ERCP showed complete resolution of the biliary stricture with normal extra- and intra-hepatic biliary tree, and the biliary stent was removed (Figure 4). 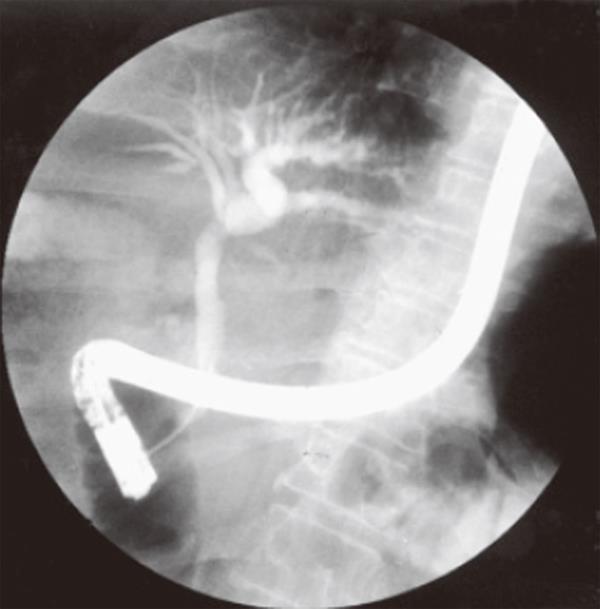 During the follow-up, significant improvement was found in the ascites. The patient required small doses of diuretics to control it, and had prophylactic variceal band ligation. Additional Doppler ultrasound showed re-canalization of the portal vein. The patient had a normal life and gained weight (around 25 Kg) with normal liver enzymes and function at the time when he was reported in this paper.

Tuberculous biliary stricture as a cause of obstructive jaundice is extremely uncommon. It involves all parts of the biliary tree, namely the intrahepatic biliary radicles, right and left hepatic ducts, common hepatic duct, cystic duct and CBD [6-16].

The clinical and cholangiographic features of tuberculous biliary stricture are usually not helpful in differentiating tuberculosis from other common causes of endo-luminal biliary stricture such as primary sclerosing cholangitis or cholangiocarcinoma. Alvarez and Sollano[17] have proposed the characteristic cholangiographic patterns of hepatobiliary tuberculosis, including a tight hilar stricture with dilated intrahepatic ducts, a long smooth stricture involving the distal bile duct, pruning of the distal intrahepatic ducts, and sclerosing cholangitis-like changes. However, the cholangiographic findings in our patient could not be differentiated from those caused by other factors.

Most of the reported cases of tuberculous biliary stricture are diagnosed until laparotomy is performed. The histopathologic findings of tuberculosis include caseating granulomatous inflammation and Langhans giant cells[8,14] . However, in some cases the diagnosis is achieved by detection of acid fast bacilli (AFB) after staining or culture in the biliary fluid aspirate during ERCP[7], but the yield of these tests is low. PCR technique for Mycobacterium tuberculosis from biliary fluid may be helpful[13,16]. Prasad and Pandey [15] reported that AFB of the aspirated bile can diagnose tuberculous biliary stricture.

In our patient, both diagnosis and management were challenging. The diagnosis was difficult because of clinical presentations mimicing other common etiology, lack of constitutional symptoms of tuberculosis such as fever and night sweat, absence of past history of tuberculosis, negative tuberculin skin test, lack of radiological evidence of old or active tuberculosis. However, the presence of mediastinal lymphadenopathy, an unusual site for a metastatic cholangiocarcinoma, raises the possibility of other diseases such as tuberculosis, lymphoma or sarcoidosis. Therefore, mediastinoscopy with excisional biopsy from the mediastinal lymph nodes is essential for confirming the diagnosis of tuberculosis as the likely cause of biliary stricture and excluding other possibilities.

The challenge in the management is the high risk of anti-TB hepatotoxicity, especially in the setting of liver cirrhosis and the uncertainity of the diagnosis. The possibility of cholangiocarcinoma or lymphoma can be completely ruled out based on the dramatic clinical, biochemical and radiological responses to Anti-TB drugs as well as the positive TB culture.

In most of the reported cases, the biliary stricture does not resolve with medical therapy alone and requires surgical intervention and biliary metallic stent placement [7,13]. However, to our knowledge, biliary stricture is completely resolved only in one case after medical therapy without surgery or permanent biliary drainage procedure[16]. In our patient, the biliary stricture was completely resolved within 3 mo of anti-TB therapy without any further intervention. The reason for this is likely due to no permanent fibrotic changes.

In conclusion, tuberculous biliary stricture can be completely resolved after medical therapy alone, highlighting that the diagnosis of such cases is often difficult and a high index of suspicion must be kept in mind especially in areas where TB is relatively common.