AIM: To study the loss of heterozygosity (LOH) on 12p12-13 in Chinese colon carcinoma patients.

CONCLUSION: Genomic instability may occur on 12p-12-13 of Kras2 gene in the development and progression of colon carcinoma. The high LOH of Kras2 gene may directly influence the transcription and translation of wild type Kras2 gene.

Clinical and experimental studies have shown that point mutation of Kras2 gene plays an important role in the development and progression of tumors [1-4]. However, it has been reported that wild type Kras2 gene has inhibitory effects on tumor growth and proliferation [5]. Inactivation of cancer suppressor gene is a frequently encountered early event in the development of tumors, leading to loss of heterozygosity (LOH) [6-10]. This study was to investigate the possible genetic variation of wild type Kras2 gene in the carcinogenesis of colon carcinoma by analyzing LOH in tumor and its adjacent tissues.

Ten specimens of primary carcinoma tissue, 10 specimens of its adjacent tissue and 10 specimens of normal tissue at the distal incision margin were taken respectively from patients with pathologically confirmed colon carcinoma before and after surgery at the Department of Surgery, General Hospital of the Chinese PLA from January to December 2003. The patients did not receive radiotherapy and chemotherapy before surgery.

Specimens of carcinoma and its adjacent tissues as well as normal tissue at the distal incision margin were suspended respectively in 50μL DNA lysate containing 50 mmol/L Tris-HCI, 1mmol/L EDTA, 0.1% Tween 20, 200 mg/L protease K, pH8.0, and digested overnight at 50 oC. Protease K was denatured and inactivated at 95 oC. Then the supernatant was centrifuged and stored at -20oC for use.

Based on the principles of fluorescence labeling of primers, a fluorescence labeled primer group-matched sequence was linked to the 5 ' end of a specific primer, so that the PCR products were labeled with the fluorescence group in the process of PCR. The fluorescence labeled PCR products were electrophoresed using the AB 1377 fluorescence sequencer. Data collected by the electrophoresis were analyzed using the GENESCAN and GENOTYPE Softwares to obtain the peak and size of the map. Gene typing was performed. The peak was found in 2 allelic gene segments and compared to the normal value of the adjacent channels. The allelic ratio was calculated according to the following formula: allelic ratio=peak ratio of carcinoma tissue/peak ratio of normal tissue. LOH was considered when the allelic ratio was higher than 1.5 or lower than 0.67. Microsatellite instability (MSI) was considered when no abnormal peak point was found in DNA of carcinoma tissue compared to normal tissue.

The correlation between LOH and clinical and pathological parameters was evaluated by chi-square test. All statistical analyses were carried out by SPSS 10.0. P  <  0.05 was considered statistically significant. 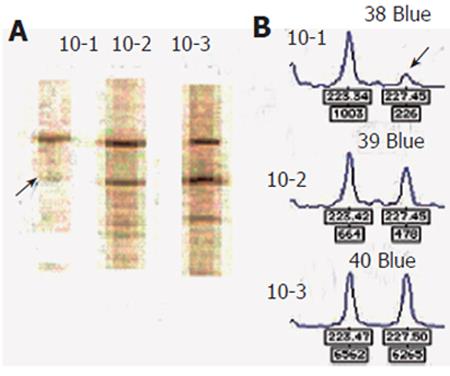 Correlation between LOH on 12p12-13 and clinico-pathological parameters

Chi-square test was used to evaluate the correlation between LOH and clinico-pathological parameters. The results showed that LOH did not correlate with age, sex, tumor size and lymph node metastasis (Table 4).

RASp21consisting of Hras1, Nras and Kras2, is a GTP-coupled protein and can transfer signals from cell surface into cells. Its normal expression is necessary to maintain the normal physiological activities of cells. Activated Ras proto-oncogenes, especially Kras2, play an important role in the carcinogenesis of human and rodent tumors. Mutations of Kras2 gene have been found in tumor tissues of human organs, including bladder[11], breast[12], rectum[13], kidney[14], liver[15], lung[16], ovary[17], pancreas[18], stomach[19] and hematopoietic system[20]. In general, about 30% cancers display ras gene mutations, while the highest mutation rate is found in colonic and pancreatic cancer [21-25]. In samples of mutated ras gene, most mutations occur in Kras2 gene. Mutation and activation of ras gene usually occur at codens 12 and 13 or 61, leading to the transformation of proto-oncogene to oncogene[26]. This kind of activation can up-regulate the expression of ras/ErK signal channel in the absence of external stimuli and further increase the abnormality of associated signal channels, leading to malignant transformation of cells. Activated ras gene is usually considered as the dominant oncogene because of the existing expression of wild type ras and malignant transformation of activated ras[27]. However, is still controversial the effect of the dominant gene-ras is still controversial since wild type ras has been found in human and mouse pulmonary adenocarcinomas[28,29].

It was reported that the development and progression of colon carcinoma are a process involving multiple genes and factors, and characterized by its stages: normal mucosa→atypical hyperplasia including intestinal metaplasia→adenoma→adenocarcinoma[30]. Kras2 gene as a dominant oncogene due to its point mutation plays an important role in the progression of canceration, which is one of the reasons why the inhibitory effect of wild type kras2 gene on cancer is concealed. Since cancer suppressor gene can be inactivated by deleting mutation, we studied LOH of Kras 2 gene on 12p12-13 in primary colon carcinoma. LOH was detected in 30% (3/10) of adjacent tissue specimens at least on one marker, 28.5% (2/7) on D12S1034, suggesting that 12p12-13 is genomically insin precancerous cells, and that LOH on 12p12-13 may influence the expression of wild type Kras2 gene in early colon carcinoma. LOH was detected in 60% colon carcinoma tissue specimens at least on one marker, which was higher than that in adjacent tissue, and 42.86% (3/7) on D12S1034, suggesting that the genomic instability of 12p12-13 exacerbates with the progression of carcinoma as demonstrated not only by the increasing number of allelic gene loss points but also by the increasing frequency of allelic gene loss at the same point. Such changes lead to a decrease of Kras2 gene copies used for transformation. When another point mutation occurs in the process of carcinogenesis and produces dominant oncogene effects, the cancer suppressing function of wild type Kras2 gene can be completely covered up.

In conclusion, Kras2 gene can exert inhibitory effects on the proliferation of colon carcinoma cells. LOH on 12p12-13 does not correlate with the clinical and pathological parameters obtained from colon carcinoma.