METHODS: BSD was induced in Balb/c mice by oral administration with Bacillus dysenteriae and Salmonella typhimurium. HXZQ was administrated from the day of diarrhea induction at dosages of 5.21 g/kg and 0.52 g/kg, respectively. The onset of diarrhea and lasting time were recorded. Peyer’s patches and peripheral lymphocytes were prepared for flow cytometry, and levels of TNF-α in peripheral blood and enteric tissue homogenates were determined with ELISA. Student’s t test was employed for statistics.

CONCLUSION: The immune regulation of CD4+ and CD8+ cells in Peyer’s patch and suppression of TNF-α levels in enteric homogenates may partially explain the effect of HXZQ on improvement of BSD.

Enteric mucosal responses play an important role in anti-inflammation of the digestive tract[4,5]. However, the effects of HXZQ on enteric mucosal immune responses are largely unknown.

Dysenteriae and Salmonella typhimurium induced diarrhea (BSD) is one of widely used animal models for human infectious diarrhea study[6,7]. In the present study, we investigated the effects of huoxiangzhengqi liquid on enteric mucosal immune responses in mice with BSD.

Forty Balb/c mice, female and male in equal number, 8-10 wk old, were purchased from the Research Institute of Experimental Animals, Chinese Academy of Medical Science, Beijing. Mice were randomly divided into four groups with 10 in each group: control group (Control), BSD group, Huoxiangzhengqi liquid treated BSD groups at high dosage and low dosage (HXZQ high, HXZQ low). Mice were housed in a temperature-, humidity- and light-controlled environment with free access to rodent chow and water. The light-dark cycle was 12 h:12 h with the light phase from 06:00 am to 18:00 pm.

BSD were induced by oral administration with sodium ampicillin (Northern China Pharmaceutical Limited Company, Guangzhou, China) at a dosage of 20 g/kg body weight, and 8 h later, were orally administered with Bacillus dysenteriae and Salmonella typhimurium (National Institute for Control of Drugs and Biological Products, Beijing, China) at the proportion of 1:1 with 0.2 mL/mouse (concentration at 1010 CFU/mL). Mice in BSD, HXZQ high, and HXZQ low groups were induced with BSD, and mice in Control group were treated with equal volume physiological saline. The onset of diarrhea and its lasting time were recorded as previously reported[6,7].

Treatment of BSD with HXZQ

The administrations of HXZQ started from the day of induction of BSD, once a day for three days. The dosage of HXZQ was determined according to our in vitro tests, and the doses at 5.21 g (crude herbal drug)/kg body weight and 0.52 g/kg were used for the mice in HXZQ high and HXZQ low groups, respectively, in a volume of 10 mL/kg. The mice in control group and BSD group were administered with the same volume of saline.

The mice were sacrificed on the fourth day after the treatment. Peyer’s patch cells were separately harvested according to Lyscom’s method[8]. Briefly, the tissues were mechanically dissociated into phosphate buffered saline (PBS). Lymphocytes were isolated by density centrifugation on Ficoll Hypaque (Lymphoprep, Nycomed, Olso, Norway). The lymphocytes were collected by repeated centrifugation at 463 rpm for 5 min after the tissues were washed twice with PBS and then suspended in PBS at a density of 1 × 106 cells/mL for flow cytometry.

Whole blood samples were collected before the mice were sacrificed, and suspended in tubes containing 25 μL heparin (5000 IU/mL). Erythrocytes were lysed in a buffer containing 0.84% NH4Cl at pH 7.4 for 3-5 min. The remaining cells were then washed in saline twice, and resuspended for flow cytometry.

Colons were washed and put into homogenate medium (dehydrated alcohol and saline at a ratio of 1:4) at 300 g/L. After mixed sufficiently, they were placed at 4°C for 2 h, and centrifuged at 3500 rpm for 15 min. The supernatant was collected, and stored at 4°C for ELISA.

Flow cytometry for CD4+ and CD8+

Detection of TNF-α in peripheral blood and intestinal tissue homogenates was conducted with ELISA kit (Cat.No.88-7340 eBioscience, Inc) according to instructions of the manuals.

After induction of BSD, all mice showed diarrhea within 6 h on the day of induction. The diarrhea in the mice in BSD group lasted until the fourth day when the mice were sacrificed. Diarrhea lasting time of the mice in HXZQ high and HXZQ low groups were 36 and 54 h, respectively. 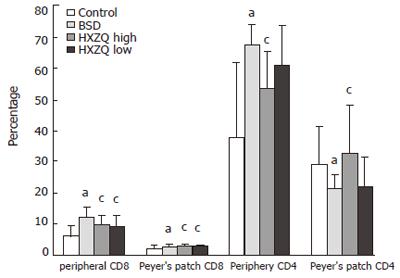 HXZQ is one of ancient compound liquids of traditional Chinese herbal preparations. In China, it has been used for the effective treatment of various common gastrointestinal infectious diseases (GID), such as acute gastroenteritis, diarrhea and gastrointestinal type Frigorism[1]. It has been reported that HXZQ can promote gastroenteric motility, ameliorate myoelectricity of enteric smooth muscle and regulate gastrointestinal function[2]. Huoxiangzhengqi liquid has also been shown to have regulatory effects on specific immune responses[3]. Agastache rugosa is the essential component of huoxiangzhengqi liquid, and the extract of Agastache rugosa has been reported to have immune modulatory activities[9-15]. BSD in mice is induced by administration of attacking pathogenic bacteria, and shares similar pathogenesis and symptoms with GID[6,7]. Our study showed that HXZQ at 5.21 g/kg and 0.521 g/kg could significantly ameliorate diarrhea in BSD mice.

Although bacteria are usually regarded as harmful, it is now recognized that the breakdown or a failure of components of the indigenous microflora is responsible for allergic diseases or food enteropathies[8-10]. Intestinal microbial species and its product can partially modulate mucosal immune responses and influence the expansion and structure of lymphoid tissues, the activation of TH1 and TH2 T cells[11,12]. Intestinal bacteria are required for the development of gut-associated lymphoid tissues (GALT), which mediate a variety of host immune functions, such as mucosal immunity and oral tolerance[13]. Peyer’s patch lymphocytes, as one important part of GALT, are considered to be the effectors in reacting with intestinal antigens, and mediate immune tolerance[14]. It has been known that some drugs can reestablish the microenvironment of the intestinal tract, thereby enhancing mucosal as well as systemic immune response[15-17]. Intestinal immunity has been evaluated with respect to CD4+ cells armed with secretory intestine-derived IgA, and CD8+ cells armed with IgG[18]. Down-regulation of immune responses by regulatory T cells is one of the major mechanisms involved in the induction of tolerance and self- and allo-antigen[19]. Microflora-associated antigens can drive antigen-specific CD4+ T cells to cause intestinal inflammation. Therefore, the effectors CD4+ T cells seem to regulate the development of intestinal inflammation[4]. Our results showed that there were significant changes in CD4+ and CD8+ cells both in Peyer’s patch and peripheral blood in BSD mice, and HXZQ could regulate the proportion of CD4+ to CD8+. These results further supported that dysbacteria might take some active role in immune response in BSD mice, and HXZQ might have potential regulative activities on enteric mucosal immune responses in diarrhea. The results also indicate that CD4+ and CD8+ T cells in Peyer’s patch may serve as one of the targets of the immunoregulatory activity of huxiangzhengqi liquid.

TNF-α is a pleiotropic cytokine with strong proin-flammatory, immunomodulatory properties, and plays a critical role in inflammation and inflammatory bowel disease[20,21]. Anti-TNF therapy has been proven to be a milestone in the treatment of inflammatory bowel disease, and equally important in other inflammation-mediated conditions, including viral infections and mucosal inflammation[22,23]. Different strategies have been explored aiming at inhibiting TNF. Infliximab, a chimeric antibody to TNF-α, holds much promise for the treatment of Crohn’s disease[24]. TNF-α levels in enteric tissue homogenates and peripheral blood in BSD mice were higher in our study, while HXZQ could decrease TNF-α. The results could partially explain the immunosuppressive activities of HXZQ in immune response of mice, and further support that dysbacteria could lead to increased inflammatory response in BSD mice.

In conclusion, enteric immune response might be actively involved in diarrhea and regulation of CD4 and CD8 T cells in Peyer’s patch and suppression of TNF-α levels in enteric homogenates might be one of the mechanisms of HXZQ in the treatment of diarrhea.