AIM: To determine which treatment modality - hepatectomy or percutaneous ablation - is more beneficial for patients with small hepatocellular carcinoma (HCC) (≤ 4 cm) in terms of long-term outcomes.

METHODS: A retrospective analysis of 149 patients with HCC ≤ 4 cm was conducted. Eighty-five patients underwent partial hepatectomy (anatomic in 47 and non-anatomic in 38) and 64 underwent percutaneous ablation (percutaneous ethanol injection in 37, radiofrequency ablation in 21, and microwave coagulation in 6). The median follow-up period was 69 mo.

Hepatectomy and percutaneous ablation are the treatments of choice for small hepatocellular carcinoma (HCC)[1,2]. Hepatectomy is recommended by surgeons, as this procedure removes portal venous thrombi in the adjacent liver[3], allows for better local control[4], and has better survival outcomes compared with percutaneous ablation[5,6]. In contrast, gastroenterologists and interventional radiologists advocate percutaneous ablation techniques including ethanol injection[7-9], microwave coagulation[10-12], and radiofrequency ablation[13-15], as these methods are not as invasive as hepatectomy[7-15], have a lower incidence of morbidity and mortality[7-13,15], are more feasible in patients with impaired hepatic functional reserve[7-15], and have similar survival outcomes compared with hepatectomy[7-9,15].

The aim of this study was to determine which treatment modality - hepatectomy or percutaneous ablation - is more beneficial for patients with small (≤ 4 cm) HCC in terms of long-term outcomes.

From January 1990 to December 2002, 224 consecutive patients with HCC underwent either partial hepatectomy or percutaneous ablation therapy as an initial treatment at the Niigata University Medical and Dental Hospital. Of these patients, 149 with HCC measuring ≤ 4 cm formed the basis of this retrospective study; they included 104 men and 45 women with a median age of 64 years (range: 29-83 years). Only HCCs measuring ≤ 4 cm were included in the current study, because percutaneous ablation therapy was the treatment modality mainly recommended for such tumors in our hospital. All patients were Japanese.

The remaining 64 patients underwent a percutaneous ablation procedure for HCC in the Division of Gastroenterology and Hepatology. Hepatectomy was considered as a feasible option for 51 of these 64 patients and was offered as an alternative. However, all these patients preferred to undergo percutaneous ablation treatment. Hepatectomy was not considered feasible in the remaining 13 patients due to impaired hepatic functional reserve (KICG < 0.06); therefore, these patients were only offered percutaneous ablation treatment. Percutaneous ablation procedures included percutaneous ethanol injection (PEI) in 37 patients, radiofrequency ablation (RFA) in 21, and microwave coagulation therapy (MCT) in 6. In these patients, adequacy of the ablation was assured with dual-phase dynamic computed tomography (section thickness of 5 mm) within a month of the procedure. A microwave tissue coagulator (Microtaze® OT-110M; Alfresa-Pharma Co., Inc., Osaka, Japan) and an RF generator (Cool-tip® RF System, CMI Century Medical Co., Inc., Tokyo, Japan) were introduced in our hospital in 1995 and 2000, respectively.

There were no mortalities 30 d post-treatment in the current study. Serum concentrations of alpha-fetoprotein were measured and abdominal ultrasonography and/or contrast-enhanced computed tomography was performed on all the patients approximately 1 mo after the treatment. Thereafter, patients were regularly monitored for recurrences in outpatient clinics every 3 mo by physical examination, laboratory tests, and imaging studies. When intrahepatic recurrences were detected, they were treated with either interventional radiological techniques, such as PEI, RFA, MCT, transarterial chemoembolization and hepatic arterial infusion, or repeat hepatectomy when indicated. Patients with disseminated recurrences and those in a debilitated state were treated with supportive care.

Definition of local recurrence after treatment

Resected specimens from all the patients who had undergone hepatectomy were submitted to the Department of Surgical Pathology in our hospital. Each specimen was examined to determine the number of hepatic tumors, tumor size, vascular invasion (gross or microscopic), and cirrhosis. Vascular invasion included both portal and hepatic venous invasion in the current study. Cirrhosis in the adjacent (non-tumorous) liver was diagnosed microscopically based on the presence of regenerative nodules surrounded by fibrous septa. The pathology of the liver was confirmed by fine-needle biopsy in all the patients undergoing percutaneous ablation. Among this group of patients, 41 patients had a fine-needle biopsy of the tumor.

To determine the factors that may influence outcomes after the treatment, 13 conventional variables[19-22] were identified for univariate and multivariate analyses (Table 1). Vascular invasion and histologic grade were not chosen because they were often missed in patients undergoing percutaneous ablation.

Medical records and survival data were obtained for all the patients. The causes of death were determined from the medical records. Deaths from other causes were treated as uncensored cases. The Kaplan-Meier method was used to estimate the cumulative incidences of events, and differences in these incidences were evaluated using the log rank test. The Cox proportional hazards regression model was performed to identify the factors that were independently associated with local recurrence and survival. In this model, a stepwise selection was used for variable selection with entry and removal limits of P < 0.1 and P > 0.15, respectively. The stability of each model was confirmed using a step-backward and step-forward fitting procedure, and variables identified as having an independent influence on local recurrence and survival were identical in both the procedures. Clinical features and pathologic tumor-related factors were compared between the two groups using Fisher’s exact test. All statistical evaluations were performed using the SPSS 11.5J software package (SPSS Japan Inc., Tokyo, Japan). All tests were two-sided and P values of < 0.05 were considered statistically significant.

Patients treated with hepatectomy had larger tumors than those treated with percutaneous ablation. Patients who had undergone percutaneous ablation were characterized by hepatitis C virus infection, cirrhosis, Child-Pugh classification B or C, an impaired indocyanine green retention rate at 15 min, and increased serum concentrations of aspartate aminotransferase and alanine aminotransferase, suggesting impaired hepatic functional reserve with active hepatitis in these patients (Table 1).

Outcomes after treatment according to tumor size 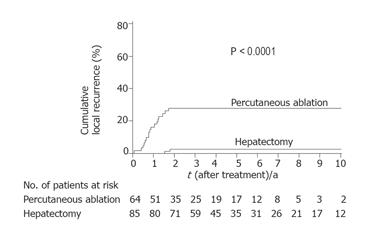 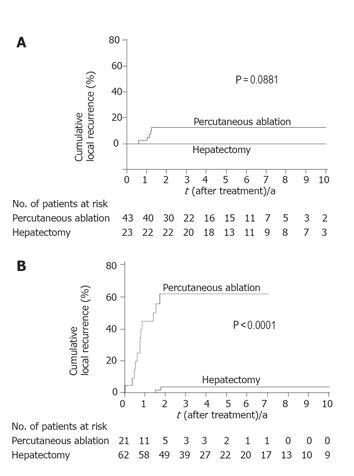 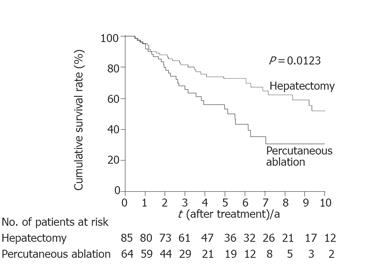 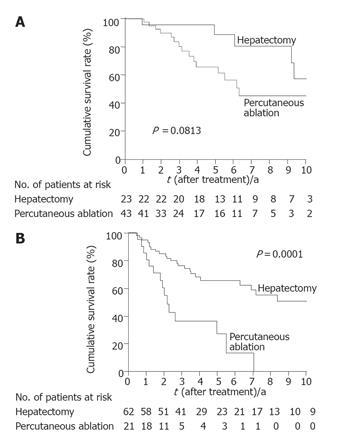 Selecting the correct treatment modality to suit individual patients with HCC remains a matter of debate[1,4,5]. This prompted us to conduct the current study, which has revealed that hepatectomy provided better outcomes for patients with HCC ≤4 cm than percutaneous ablation. This may partly be due to the fact that hepatic functional reserve was better in patients who had undergone hepatectomy. Despite this, we found that the incidence of local recurrence decreased and long-term survival increased independently after hepatectomy, indicating that this is an oncologically reliable treatment modality for HCC ≤ 4 cm.

Local recurrence was found to be more frequent after percutaneous ablation than after hepatectomy. Prospective, randomized controlled trials for PEI treatment of HCC ≤ 4 cm[23-25] demonstrated that cumulative 2-year local recurrence rates ranged from 33% to 45%. These rates are comparable with the 28% incidence of local recurrence after percutaneous ablation detected in the current study. Local recurrences after percutaneous ablation may be attributable to insufficient ablation of the primary tumor and/or the presence of portal or hepatic venous tumor thrombi in the adjacent liver[26,27]. Hepatectomy removes a rim of non-neoplastic liver parenchyma (a resection margin) together with the primary tumor, and thus eradicates both the primary tumor and venous tumor thrombi within the resection margin. This may explain better the outcomes following hepatectomy. In the current study, the beneficial effect of hepatectomy was prominent in a subgroup of patients with tumors >2 cm (Figures 2B and 4B), suggesting that these patients are good candidates for hepatectomy. Tumors > 2 cm had a higher incidence of vascular invasion than tumors ≤ 2 cm (Table 4). Taken together, these findings suggest that the beneficial effect of hepatectomy is due to the clearance of venous tumor thrombi in the adjacent liver in addition to the complete removal of the primary tumor.

HCC mainly spreads via the portal and hepatic veins. Vascular invasion is an established adverse prognostic factor of HCC[19-21,28-30], and the incidence of vascular invasion increases as the tumor enlarges[30-33]. The current study confirmed this, with vascular invasion being more frequent in tumors >2 cm. Recent authors have suggested that tumors >2 cm are independently associated with local failure after RFA[34,35]. Considering that vascular invasion was less frequent in tumors ≤2 cm in our patients, percutaneous ablation appears to be an appropriate treatment modality for HCCs ≤2 cm. Despite this, outcomes for patients with HCCs ≤2 cm were better following hepatectomy than following percutaneous ablation. Due to the small sample size of this study, however, these differences were only marginally significant. We believe that hepatectomy may also be an appropriate treatment modality for HCCs ≤2 cm, provided that the patient is robust and that the hepatic functional reserve of the patient is at a level permitted for the resection.

The current study has some limitations. First, it was a retrospective analysis of a small number of patients; second, the follow-up period in 64 patients was <60 mo; and third, percutaneous ablation therapy included three different treatment modalities. However, we believe that these limitations do not significantly influence the outcome of the study, as the marked differences between each group appear to overcome these biases.