Renal cell carcinoma (RCC) is the most common renal tumor, accounting for 2%-3% of all malignancies. Though RCC is known to spread hematogenously, isolated RCC metastasis to the stomach is a rare event. In this article, we describe the clinical course of a patient who developed a pancreatic recurrence of RCC and 1 year later a gastric recurrence of RCC treated 10 years ago with a resection and interleukin-2 (IL-2).

Accumulating evidence indicates that metastatic involvement of the pancreas and stomach should be suspected in any patient with a history of RCC who presents with gastrointestinal symptoms even 10 years after RCC resection and immunotherapy.

Renal cell carcinoma (RCC) is the most common renal tumor, accounting for 2%-3% of all malignancies[1]. It has the highest incidence in the 6th decade and occurs twice as often in men compared to women[2]. Several risk factors are associated with a high risk for RCC such as tobacco smoking, obesity, exposure to asbestos or chemicals, thiazide drug intake and urinary tract infections[3]. RCC causes only few early warning signs. The symptoms are often non-specific and the triad of Virchow consisting of an abdominal mass together with flank pain, and macroscopic hematuria is nowadays rare[4]. RCC spreads hematogenously and is known for its ubiquitous metastatic patterns. While pancreatic localization of recurrence is quite common[4,5], the gastric localization of recurrences of this type of tumor is quite rare. Some authors have described a recurrence of RCC in the stomach but among them only a few are well documented[6-14].

In this article, we describe a patient who developed a pancreatic recurrence of HCC and 1 year later a gastric recurrence of RCC treated 10 ago before with a resection and IL-2.

To our knowledge, this is the first report that describes the recurrence of metastatic RCC 10 years after a complete response to high-dose IL-2 therapy showing as a pancreatic metastasis and a year later again as a gastric metastasis.

This paper reports the history of a 68-year-old male patient. He underwent a right radical nephrectomy for RCC in 1990 followed by a high-dose IL-2 treatment. No other relevant disease was present in his past clinical history.

Ten years after the above-mentioned intervention he developed a disease recurrence involving the spleen and tail of the pancreas. He underwent a standard diagnostic work-up that included hematochemical determinations, then a splenectomy and distal pancreatectomy followed by a high-dose IL-2 therapy. No evidence of involvement of other abdominal organs was present.

One month after the last intervention, he visited the emergency room with a 10-d lasting history of polyuria and polydipsia. His physical examination was negative and hematochemical assays revealed the presence of hyperglycemia (494 mg/dL) and an increase of serum amylase (329 IU/L), while the hematocrit and differential blood counts were normal. The diagnosis was diabetes related to the recent distal pancreasectomy. He was treated with fast-acting insulin and discharged with a prescription of insulin. Eleven months later, he again visited the emergency room with a 3-d history of postural dizziness and weakness. He also reported melena the day before admission. The only other gastrointestinal symptom that could be elicited was early increasing satiety after meal during the pervious year. No weight loss was present. Hematochemical determinations revealed anemia (hematocrit 17.7%, hemoglobin 56 g/L) with a rise in the count of platelets (579 000/μL). The level of glycemia at fasting was 453 mg/dL though the patient was following his therapy. No abnormal finding was present on physical examination. A nasogastric tube was placed and fresh blood in the stomach was revealed at aspiration. The patient immediately received intravenous fluids and 3 units of blood. His hyperglycemia was treated with fast-acting insulin. The patient underwent upper gastrointestinal endoscopy showing a multilobulated, polypoid, friable, and bleeding mass (5 cm in diameter) in the gastric fundus with a central bleeding ulcer. Epinephrine was injected into the lesion and the bleeding stopped. The patient underwent a further endoscopy 3 d later and a sample of the mass was taken for biopsy. Histopathologic examination revealed a metastatic RCC which was a poorly differentiated clear cell variant lesion, being consistent with a metastasis of RCC resected 11 years ago. Chest X-ray showed two metastases with a maximum size of 1 and 3.5 cm respectively (Figure 1). Computed tomography (CT) scans of the abdomen displayed a gastric mass (5 cm in diameter), several para-aortic lymphoadenopathies and liver metastases (Figure 2). 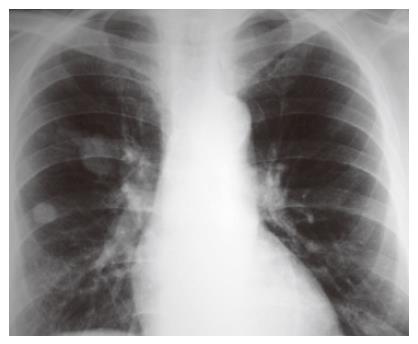 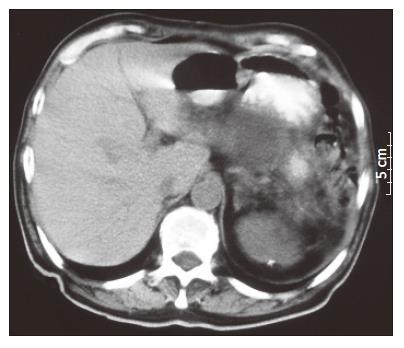 Figure 2 An irregular mass (5 cm in diameter) corresponding to gastric metastasis, several para-aortic lymphoadenopathies and liver metastatic nodules as shown by CT scan of the abdomen.

Chemotherapy was proposed to reduce the tumor size as well as the hepatic and pulmonary metastases, but the patient refused to undergo any treatment and was discharged.

After one month, he presented again to the emergency room with postural dizziness, melena, and weakness. The patient eventually underwent surgery. The large mass described above was found in the posterior wall of the fundus and body of the stomach. It was penetrating the surrounding tissues. Many lymphoadenopathies along the common hepatic artery, left gastric artery and celiac trunk were also present. Therefore, total gastrectomy was performed with lymphoadenectomy and omentectomy, and esophago-jejunostomy according to the Roux technique. Histopathological examination confirmed the presence of metastatic clear RCC. Both proximal and distal resection margins appeared to be tumor free. The patient had an uneventful postoperative course.

One month after the intervention, he was started on chemotherapy with gemcitabine and IL-2. The therapy lasted for 20 mo. The patient during this period had a good quality of life. Because of the presence of abdominal pain, a treatment with morphine was started. He also received erythropoietin and iron to treat anemia. Then he received blood transfusions in the following 3 mo. The patient finally died due to the worsening of anemia and cachexia.

This paper describes for the first time an uncommon biological and clinical behavior of RCC. RCC is known to cause metastatic recurrences many years after its resection and even after immunotherapy[14]. However, while recurrence at the pancreatic site is quite common, gastric recurrence is atypical[15]. Metastatic involvement of the stomach is usually considered as an extraordinary event and accounts for only 0.2%-0.7% of gastric neoplastic diseases. In a large series consisting of 23 019 autopsies, Davis and Zollinger[16] found 67 metastases to the stomach from primary tumors outside the gastrointestinal tract. None was from the kidney. Higgins[17] reported 64 metastases in the stomach out of 31 541 examined autopsies. In this series, none was from the kidney.

An isolated gastric metastasis from RCC is extremely rare and only 15 cases including the present one have been described[6-14]. The characteristics of all the reported cases including our one are summarized in Table 1. From Table 1, we could see that RCC metastasizes to the stomach several years after nephrectomy.

Gastric RCC metastasis often starts as a submucosal lesion, which encroaches onto the mucosa and becomes ulcerated. The lesion may be single or multiple and is grossly polypoid or plaque-like. Metastatic tumors can be distinguished from gastric carcinoma based on the absence of cellular atypia in the gastric glandular structures which may appear compressed by the metastatic tumor. The most common presenting symptom is abdominal pain but nausea, vomiting, and gastrointestinal bleeding can also be present. Gastrointestinal bleeding is mainly related to acid erosion of the metastatic lesion. Diagnosis is confirmed by upper gastrointestinal endoscopy and histopathological examination of a biopsy sample of the lesion.

Surgical excision of gastric metastasis is mandatory as these lesions may bleed again after endoscopic coagulation treatment. A unique metastasis should be treated as a new tumor with prompt surgical excision. This often results in a significant survival prolongation with a good quality of life. In the present case, though multiple pulmonary and hepatic metastases were present, surgery had to be performed because of the high risk of rebleeding.

The prolonged disease-free time could be at least in part due to the IL-2 immunotherapy that apparently yielded a complete response. Immunotherapy with IL-2 is in fact considered as the mainstay of treatment for RCC as cytotoxic chemotherapy fails[18]. This treatment can achieve certain effects in patients with a metastatic disease[19]. The mechanism of action of IL-2 at the cellular level is not perfectly known. It is hypothesized that IL-2 stimulates a cellular immune response to tumor involving mainly the natural killer cells and T lymphocytes[20]. The response rate fluctuates from 15% to 20% and complete responders account for one-third of this group[19]. The survival time of complete responders is significantly prolonged and exceeds 60% at 5 years, while non-responders with metastatic RCC have a median survival time of less than 1 year[19].

The present case draws attention to an important aspect of the biological behavior of RCC. This tumor is often a slow-growing lesion and may be associated with a late onset of solitary metastases that may occur even 11 years later than the primary tumor. Usually metastases grow slowly. In our patient, the first pancreatic recurrence was 1 year earlier than the gastric one. Gastric localization was undetectable when the patient underwent surgery for the first recurrence. Therefore, a careful follow-up should be made in patients who develop a first recurrence of RCC since they may develop multiple recurrences at different sites even after several years. IL-2 therapy seems to be able to treat the disease once it spreads out but has no effect on its prevention.