CONCLUSION: According to our preliminary results, SB angiodysplasia was found in an increased prevalence among CRF patients with obscure bleeding. WCE is useful in diagnosis of gastrointestinal pathologies and in planning appropriate therapeutic intervention and, therefore, should be included in the work-up of this group of patients.

Unexplained gastrointestinal bleeding (overt or occult) and anemia are common complications of advanced chronic renal failure (CRF)[1,2]. Furthermore, 19% of patients with advanced CRF prior to dialysis and 6% of those on maintenance hemodialysis have hemoccult positive stool[3]. In some cases, upper and lower gastrointestinal tract endoscopic and imaging studies cannot explain these symptoms and findings and bleeding remains a real diagnostic and therapeutic challenge.

Until recently, small bowel (SB) investigation with the available endoscopic and imaging studies was incomplete. Consequently, there are no studies giving information on the pathology of the entire SB in CRF patients, except for two autopsy studies[4,5]. In view of the scarcity of information, we conducted this study and used wireless capsule endoscopy (WCE) to evaluate SB pathology in patients with advanced CRF and obscure bleeding. This novel method is well tolerated and allows complete visual investigation of the SB[6,7]. Moreover, the diagnostic yield of WCE, especially in obscure gastrointestinal bleeding, is significantly higher to that of any other methods, including push enteroscopy, small bowel radiography, computed tomography, magnetic resonance imaging and angiography[8]. To the best of our knowledge, this is the first endoscopic study to explore the entire SB in CRF patients with obscure gastrointestinal bleeding.

This prospective ongoing study included consecutive patients referred to our institution with advanced CRF needing SB investigation for obscure bleeding. Advanced CRF was defined as creatinine clearance of less than 30  mL/min. Renal transplant recipients with stable renal function and serum creatinine concentration ≥ 2 mg/dL for at least a 6-mo period were eligible to enter the study as well.

Age- and sex-matched patients with normal renal function and obscure gastrointestinal bleeding, investigated with WCE during the same period, were used for the interpretation of CRF patients’ findings.

Obscure gastrointestinal bleeding was defined according to the American Gastroenterological Association position statement[9]. Patients with obscure bleeding had been initially investigated with esophagogastroduodenoscopy and colonoscopy in other institutions and, if negative, were subsequently referred for WCE.

M2A capsule (Given Imaging, Yoqneam, Israel) was used in this study. Patients’ preparation and WCE procedure were carried out following the generally recommended guidelines[11]. Hemodialysis patients were not given the two-liter solution of polyethylene glycol as preparation, due to restriction of fluid intake; instead, they were advised to abstain from solid food, on the day before the procedure.

A single gastroenterologist (experienced in gastrointestinal endoscopy and WCE) initially screened all videos and selected images of potential abnormalities. Then, two gastroenterologists (also experienced in interpreting WCE findings) independently reviewed the selected images to confirm the accuracy of diagnosis. All videos were extensively discussed and findings identified by both reviewers were considered as definitive and included in the report. The procedure was defined as incomplete if the capsule failed to pass into the cecum during an eight and a half-hour period of the examination. The diagnostic yield of WCE was calculated for both CRF and non-CRF patients. Only lesions with a high potential for bleeding, as defined by Saurin et al[12], were considered.

The Statistical Package for Social Sciences (SPSS) program version 10.0 (Chicago, Illinois) was used for statistical analysis. Continuous data with normal distribution were expressed as mean ± SE, while those without as median (range). Differences between groups were evaluated using χ2 test for qualitative variables and Student’s t test for quantitative variables following a normal distribution or the Mann-Whitney U-test for those who failed the normality test. A P value of less than 0.05 was considered statistically significant. Logistic regression analysis was used to find predictive variables of findings, which were identified in terms of odds ratio (OR) with 95% confidence intervals (95% CI).

A total of 17 CRF patients fulfilled the inclusion criteria (7 predialysis patients, 4 on maintenance hemodialysis and 6 renal transplant recipients). CRF etiology and duration as well as biochemical parameters are shown in Table 1. Duration of dialysis ranged between 20 to 60 mo (mean ± SE: 38.7 ± 3.8) and the treatment schedule consisted of 4 h hemodialysis procedures three times weekly. Post-transplantation period ranged between 16 to 93 mo (mean ± SE: 53.2 ± 12.5). Immunosuppressive treatment in transplant recipients consisted of a combination of mycophenolate mofetil (MMF), cyclosporine and prednisone (3/6 patients), MMF, tacrolimus and prednisone (2/6) and MMF, sirolimus and prednisone (1/6). Two out of 17 CRF patients were taking low-dose aspirin and 1 non-steroidal anti-inflammatory drug (NSAID).

The group of non-CRF patients consisted of 51 patients with obscure bleeding. Table 2 shows the demographic and clinical characteristics of CRF and non-CRF patients. The two groups were found comparable regarding indications for WCE (overt, occult bleeding), NSAID or aspirin use, comorbid diseases, hemoglobin level and need for previous transfusions.

CRF patients completed the procedure uneventfully. One case of capsule retention was observed in a non-CRF patient with an adenocarcinoma of the mid ileum. In 3 (17.6%) CRF and 10 (19.6%) non-CRF patients, the capsule did not reach the colon, and, therefore, the entire SB was not imaged. Causes of failure of the capsule to reach the colon within the recording time in CRF patients were: slow gastric passage (1 case), presence of food impairing the capsule progression (1 case), and no clear reason (1 case). Gastric emptying time in CRF patients ranged from 5 to 288 min (median: 20) and SB transit time from 99 to 393 min (median: 275).

WCE findings of SB in both CRF and non-CRF patients are listed in Table 3. In CRF patients, the most frequent type of SB lesion identified was angiodysplasia (8/17, 47%; two actively bleeding) (Figure 1). Patchy mucosal redness and a big jejunal ulcer (Figure 2) were revealed in 2 patients, 1 of which had a recent history of NSAIDs use. Ulceration, cobblestoning, stricture and a pattern of discontinuous involvement of the mid ileum, suggestive of Crohn’s disease, were found in 1 patient. Finally, in 1 patient with erythema, edema, submucosal bleeding, erosions and non-specific ulcers of the distal ileum, caecum and ascending colon (Figure 3), tissue diagnosis of CMV enterocolitis was subsequently made by means of ileocolonoscopy and biopsies. Preceded colonoscopy in another institution, ten days earlier, had missed the lesions. Consequently, the diagnostic yield of WCE in CRF patients with obscure bleeding was significantly higher (70.6%, 12/17) compared with the non-CRF patients (41.2%, 21/51) (χ2 = 4.42, P < 0.05). 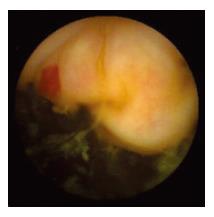 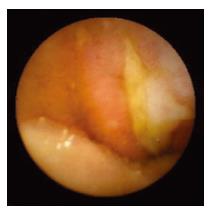 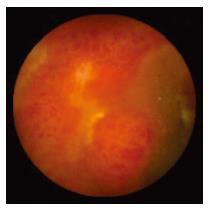 Angiodysplasia was the most frequent finding in the SB of CRF patients. A single lesion was found in 5 patients, 2 lesions in 2 and 3 in 1. Angiodysplasias were located in jejunum (5 patients), ileum (2 patients) and both (1 patient).

We assessed presence of CRF, age, sex, comorbid diseases, hemoglobin level at the time of the procedure and need for previous transfusions as potentially relevant independent variables for angiodysplasia in both CRF and non-CRF patients. Univariate logistic regression revealed only CRF as a significant predictive factor for angiodysplasia (OR = 4.1, 95% CI = 1.3-13.7, P < 0.05). Moreover, we evaluated sex, age, duration of CRF and comorbid diseases as potentially relevant independent variables for SB angiodysplasias in CRF patients. SB angiodysplasias seem to be associated only with the duration of CRF (OR = 1.03, 95% CI = 0.99-1.06, P < 0.1).

According to the preliminary results of our ongoing study, angiodysplasia was recognized as a sole causative lesion of obscure bleeding in a markedly higher percentage, 47% in CRF patients vs 17.6% in non-CRF patients. A high prevalence (66.7%) of SB angiodysplasia among 6 CRF patients has also been reported in a recent study on the impact of WCE in obscure gastrointestinal bleeding[14]. In our study, logistic regression analysis showed that CRF was a significant predictive factor for SB angiodysplasia (OR = 4.1, 95% CI = 1.3-13.7, P < 0.05). Furthermore, our data suggested that the prevalence of angiodysplasia seemed to be inversely related with the duration of CRF, although this finding was statistically insignificant (OR = 1.03, 95% CI = 0.99-1.06, P < 0.1). Previous reports on the prevalence of angiodysplasia in CRF patients, as well as its association with patient’s age and duration of the disease are conflicting[15-18]. However, all those studies used data obtained by conventional upper gastrointestinal endoscopy.

WCE findings led to plan a specific intervention in 8/12 patients with positive findings. Therapeutic measures included push enteroscopy with coagulation of angiodysplasias in 4 patients, pharmacotherapy in 3 and discontinuation of medication in another 1.

In conclusion, according to the preliminary results of our ongoing study, SB angiodysplasia has an increased prevalence among CRF patients with obscure bleeding. WCE is useful in diagnosis of gastrointestinal pathologies and in planning appropriate therapeutic intervention and, therefore, should be included in the work-up of this group of patients.