AIM: To investigate the implication of angiogenin (ANG) in the neovascularizaton and growth of human gastric carcinoma (HGC).

CONCLUSION: ANG is one of the neovascularization factors of HGC. ANG may work in coordination with VEGF, and promote the proliferation of HGC cells.

Primary gastric carcinoma is one of the most common malignant tumors in China. The mortality rate is as high as 25.53/100 000, accounting for 23.93% of all the deaths caused by malignant tumors[1]. Invasion and metastasis are the main cause for the death of cancer patients. On the other hand, invasion and metastasis of malignant tumors are closely related with angiogenesis of tumor tissue. Angiogenin (ANG) was originally isolated from serum-free supernatants of a cultured human colon adenocarcinoma cell line (HT-29) by Fett etcetera in 1985[2]. ANG possesses a ribonuclease activity[3]. Data have shown that in human colorectal cancer[4], pancreatic cancer[5], and other tumors, the expression of ANG is upregulated. However, the function of ANG in tumor angiogenesis is still unknown[6]. We used RT-PCR and immunohistochemistry to detect the expression of ANG, CD34 and vascular endothelial growth factor (VEGF) in 68 primary gastric carcinomas and the surrounding nontumorous tissues, analyzed their correlation with each other, and explored the functional role of ANG in angiogenesis and growth of gastric carcinoma.

The study enrolled 68 human gastric carcinoma (HGC) patients (56 men and 12 women; Ages, mean ± SD, 60 ± 11 years) who underwent gastric surgical resection at The First Affiliated Hospital of Fujian Medical University between March and July of 2002. The specimens for RT-PCR included both cancer tissues and the surrounding nontumorous tissues. The specimens for immunohistochemistry were taken simultaneously. All specimens were 40 g/L formaldehyde-fixed, paraffin-embedded and sliced into 4 μm sections consecutively. None of these patients had preoperative radiative therapy or chemotherapy. All the diagnoses were confirmed by pathology reported by two pathologists. Clinical data of all the patients were reviewed. Histology type, lymph node metastasis stage and TNM stage of each case were determined according to WHO tumor classification standards (stomach cancer)[7]. Twenty-seven patients had well-moderately differentiated adenocarcinoma, and 41 patients had poorly-undifferentiated adenocarcinoma. Fourteen patients were node-negative; 46 had first station lymph node metastasis, and 8 had second or distant lymph node metastasis. Twelve tumors were TNM I, 25 tumors were TNM II, 20 tumors were TNM III, and 11 tumors were TNM IV.

RNA extraction: Specimens were taken within 30 min after resection, and were stored at -80°C. RNA was extracted from HGC tissue and corresponding nontumorous gastric tissue using Trizol extraction reagent kit (Gibco BRL, USA), according to the instructions of the manual. Concentration and purity of RNA were determined by spectrophotometric method. Integrity of RNA was determined by electrophoresis.

RT-PCR and analysis of the products: ANG primers were synthesized by the Bioasia Biotechnology Company using the method as described previously[10]. Each tube contained 5 × buffer 5 μL, 10 mmol/L dNTP 0.5 μL, DTT 1.25 μL, primers (sense, antisense) 4 μL, RNA template 1 μg, mix-enzyme 0.5 μL, DEPC solution, with a total volume of 25 μL (Titan One Tube RT-PCR system, Roche, Germany). RT-PCR reaction condition is as follows: at 58°C for reverse transcription for 30 min, 94°C incubation for 2 min to terminate reverse transcription, followed by 30 cycles at 94°C for 30 s, at 52°C for 30 s, and at 72°C for 60 s; With a final extension at 72°C for 7 min. RT-PCRs were run in a Bio-rad thermocycler. The results were analysed in a Bio-rad GelDoc-1000 system, relative to the levels of β actin as the control.

ANG protein expression[8]: Cytoplasm of gastric carcinoma cells was stained brown. According to the staining intensity of the tumor cells, the staining was graded as (-), when staining was weaker than negative control; (+), for light staining; (++), for moderate staining; and (+++), for strong staining.

MVD of HGC tissues[9]: Gastric carcinoma vascular endothelial cells were stained brown. The isolated brown and yellow blood vessel endothelial cells or cell clusters in gastric carcinoma tissues were regarded as a single microvessel (Figure 1A). Areas with the highest microvessel densities were selected under 10 × microscopic magnification. Then the numbers of microvessels stained by CD34 antibody in 10 vision fields were counted under 400 × magnification (0.916 mm2 per visual field), respectively. The average of 3 highest values was taken as MVD. Indistinguishable or indistinct cells were excluded.

ANG mRNA and its inner control β-actin were detected both in gastric carcinoma tissues and in corresponding nontumorous gastric tissues of all 68 cases. The RT-PCR products of ANG and β-actin were seen at 402 bp and 234 bp by gel electrophoresis (Figure 2). The expression of ANG mRNA was higher in 68 gastric carcinoma tissues (0.4822 ± 0.0943) than in corresponding nontumorous gastric tissues (0.2758 ± 0.0187, P < 0.05). Although ANG mRNA expression was higher in poorly differentiated carcinomas, in carcinomas invading visceral peritoneum, carcinomas with lymph node metastasis and TNM stage III-IV than in well-moderately differentiated adenocarcinoma, in carcinomas invading lamina and muscularis propria, carcinomas without lymph node metastasis and TNM stage I-II, no statistical difference was found (Table 1). 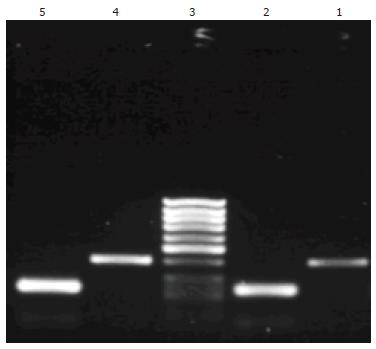 Immunohistochemistry staining showed that ANG located at the cytoplasm of gastric carcinoma cells as brown particles (Figure 1C). Over 90% of the gastric carcinoma cells were stained positive. The ANG expression level had no correlation with the age of patients, location, histological type, lymph node metastasis, and clinical stage of the tumor (Table 1).

ANG expression and the MVD of tumor tissues

ANG mRNA expression ratio of HGC tissues and the corresponding nontumorous gastric tissues (T/N) was significantly correlated with the MVD of gastric carcinoma tissue. With the increase of ANG mRNA expression, MVD elevated also. A significant positive correlation was found between them (r = 0.380, P < 0.01 ). Also, with increase of ANG expression of gastric carcinoma tissues, MVD rose as well. The MVD of the ANG strong staining group (308.37 ± 25.57) was significantly higher than that of the negative group (196.00 ± 31.34) (P < 0.01).

Correlation between VEGF and ANG expression in HGC

Correlation between tumor proliferation index and ANG expression in HGC

The up-regulation of expression of angiogenic factors in tumor tissue plays the role of switch-on in neoplastic angiogenesis. Research showed that hypoxia could induce up-regulation of ANG expression in human malignant melanoma, whereas it could induce down-regulation of ANG expression in normal melanocytes[10]. It has been shown that ANG mRNA expression is significantly higher in human colorectal cancer[4], pancreatic cancer[5], malignant melanoma[10], bladder carcinoma[11] and other tumors than in normal tissues. Our results are similar to these. The ANG expression levels of gastric carcinoma tissues were significantly higher than that in the surrounding nontumorous gastric mucosas. Both ANG mRNA and protein expression levels had no significant correlation with the patients’ age, location, histological type, lymph node metastasis, and clinical stage of the tumor[12]. Studies on pancreatic cancer[5], invasive breast carcinoma[13] and invasive cervical cancer[14] have obtained similar results. In malignant melanoma, ANG expression is upregulated around necrotic areas and invasive borders of tumors, while necrotic tissues do not express ANG. This suggests that hypoxia is the reason for the upregulation of ANG in gastric carcinoma tissues.

Tumor angiogenesis is the precondition of tumor development. Tumor MVD is recognized as an important index for judging tumor angiogenesis, which is a multi-step process. Under the effect of angiogenic factors, endothelial cells proliferate and migrate to form new vessels, and new blood vessel networks. This study showed a positive correlation between ANG expression levels and tumor vascularity evaluated by MVD, suggesting ANG contributes to the angiogenesis of HGC. In addition, previous studies have shown ANG contributes to the neovascularization of hepatocellular carcinoma[15], human colorectal cancer, and malignant melanoma[10]. ANG is one of the efficient angiogenic factors, and the only angiogenic factor with RNase activity[16]. There are two kinds of ANG-binding proteins on endothelial cells. One is actin, the other is a 170-kDa ANG-binding protein. Binding of ANG to cell surface actin causes activation of a cell-associated protease system and cell invasion. After the cells are activated, they migrate and invade the basement membrane, resulting in a decrease in the local cell density in the vicinity of the migrating cells, which may trigger the putative 170-kDa receptor gene expression in the remaining cells. These cells become ANG-responsive and divide to fill the space left by the migrating cells. The expression of the receptor gene is turned off when the gap is filled and cells become more dense. It may well be possible that the ANG-induced formation of a new capillary network is largely regulated by such cell density-dependent expression of the ANG receptor gene[3].

We found a positive correlation between ANG protein expression and VEGF expression in HGC tissues, suggesting ANG and VEGF may work in coordination in HGC angiogenesis. Asthmatic children have significantly higher levels of VEGF and angiogenin than healthy control children. A significant positive correlation exists between both angiogenic factors[18]. Moreover, a correlation has been found between VEGF and ANG levels during fetal development and in maternal diabetes[19]. Gonadotropin can not only stimulate the secretion of ANG by granulosa cells, but can also stimulate the secretion of VEGF by ovarian follicles. ANG and VEGF may also work together in the angiogenesis of corpus luteum[20]. Meanwhile, it was also found that hypoxia could induce the expression of VEGF[16]. Hypoxic induced factor-1 (HIF-1) binds VEGF oxygen sensitive enhancer under hypoxic conditions. Through the activation of c-Src, it promotes the transcription and expression of VEGF. Expression of ANG may be up-regulated in response to hypoxia within the tumor. A significant increase in the secretion and mRNA expression of ANG from both term placental explants and trophoblast cultures subjected to hypoxia in vitro was observed[21]. One study showed that ANG expression in invasive carcinomas is significantly positively correlated with HIF-1 alpha and the HIF-1 alpha target gene DEC-1[22]. Hypoxia can also induce upregulated expression of ANG in corpus luteum granulosa cells. This is related to two HIF binding sites on the ANG promoter[20]. Moreover, under hypoxic conditions, the ANG and VEGF secreted by renal proximal tubular epithelial cells may modulate angiogenesis and vascular remodeling in the renal interstitium via an increase in the production of HIF-1[23]. Accordingly, hypoxia in HGC tissues may stimulate ANG and VEGF expression through the HIF-1 pathway. ANG and VEGF may work coordinately in the angiogenesis of HGC.

We found that ANG expression levels were closely correlated with rapid growth and metastasis of malignant tumors. Pancreatic cancers with high serum ANG (sANG) levels had larger volumes than those to low sANG levels[5]. ANG expression in the gastric carcinoma tissues was significantly and positively correlated with the proliferation index of cancer cells. This suggests ANG could promote the growth of tumor cells. Studies have found that ANG can specifically combine with the leukemia cell line TF-1 and dose dependently promotes the growth of the leukemia cells[24]. ANG is constitutively translocated into the nucleus of HeLa cells where it stimulates rRNA transcription, ribosome biogenesis, proliferation and tumorigenesis[25].

We thank Drs LY Chen and X Lin for their technical assistance.