RESULTS: After treatment with 6 mmol/L hTERT-ASO, cell proliferation was inhibited in dose- and time-dependent manner. The telomerase activity decreased after treatment with hTERT-ASO for 72 h. Flow cytometry showed the cell number of G0/G1 phase increased from 2.7% to 14.7%, the cell number of S phase decreased from 72.7% to 51.0%, and a sub-G1 stage cell apoptosis peak appeared in front of G1 stage.

Telomerase is a ribonucleoprotein polymerase which adds telomeric sequences onto the ends of chromosomes to compensate for DNA end replication[1]. Telomerase plays an important role in the development of cellular immortality and oncogenesis[2]. It is different from reverse transcriptase DNA polymerase of commonly pure proteins. The activated telomerase takes the 3’ distal end of telomeres as the primer and its RNA component acts as the template[3]. In human, telomerase activity has been found in embryonic development, adult germ-line tissues, immortal cell[4,5] and most malignant tumors[6,7], while there is no evident expression in normal human tissue other than in germ cell, hemopoietic stem cells and cuticle basal cells[8,9]. Human telomerase is a ribonucleo-protein complex, composed of a catalytic reverse transcriptase subunit (hTERT), an RNA component (hTR) that serves as a template for the synthesis of telomeric repeats, and an associated protein subunit (TP1)[10-12]. Previous studies have shown that telomerase activity is found in 85%-90% of all human tumors, but not in their adjacent normal cells[13,14]. This makes telomerase a good target not only for cancer diagnosis, but also for the development of novel therapeutic agents[15,16]. Among them, only the expression of hTERT mRNA is correlated with telomerase[17], and mainly regulates the expression of human telomerase enzymatic activity[18-20]. hTERT is a useful marker for telomerase activation[21,22]. It is associated with the majority of human malignant cancers. Therefore, telomerase should be the target of anti-tumor drugs research.

In this study, we aimed to investigate the inhibitory effects of antisense phosphorothioate oligodeoxynucleotides on human pancreatic cancer cell line Bxpc-3 telomerase activity and cell growth, thereby exploring the potential value of telomerase hTERT gene as a target for antisense gene therapy in pancreatic cancer.

Cells were seeded at 2 × 106 cells /well in a 96-well plate, 100 μL per well in three wells. The ANS-ODN and NS-ODN were added to the cultured cells with the final concentrations of 1, 2, 4, 6 μmol/L, and further cultured for 24, 48, 72, 96 h, respectively. Four hours before the end of culture, 50 μL (1 g/L) 3-(4, 5-dimethylthiazol-2-yl)-2, 5-diphenyltetrazolium bromide (MTT, Sigma) was added, which was used to assay the activity of mitochondrial dehydrogenases. Four hours later, DMSO was added to solubilize the crystal product. The plate was then incubated at 37°C for another 12 h. The absorbance at 630 nm was measured with a model 550 microplate reader (Bio-Rad). The percent of cell growth inhibition was calculated as follows: (Ac-Ae)/Ac× 100%, where Ac is the absorbance value for the controls and Ae for the experimental cells.

Approximately 2 × 106 cells were harvested and washed twice with PBS, fixed with 700 mL/L alcohol for 24 h, prepared as single-cell suspension and stored at 4°C, thawed rapidly at room temperature and centrifuged to collect the cells. The cells were resuspended in a solution containing 10 g/L RNase A (833.5 μkat/g, 50 mg/L) and 20 mg/L propidium iodide (PI) for 10 min. The cell cycle distribution and apoptosis were determined by the fluorescence of individual cells measured with flow cytometry[23]. All data were analyzed using Cell Quest software.

Polymerase chain reaction enzyme-linked immunosorbent assay (PCR-ELISA) was performed following the manufacturer’s instructions (Huamei Engineering Company of Beijing). Briefly, 2 × 106 cells were isolated, mixed with 50 μL lysis buffer and incubated on ice for 30 min. Supernatant was collected after centrifugation at 14 000 g for 20 min at 4°C. In an Eppendorf tube, 2 μL of the supernatant, 45 μL of reaction mixture and 30 μL of liquid olefin were added, and centrifuged for several seconds, placed in the water-bath at 25°C for 30 min, and then subjected to PCR amplification. The PCR conditions were as follows: primer elongation at 94°C for 2 min; telomerase inactivation at 94°C for 30 s; and 35 amplification cycles, each cycle consisted of denaturation at 48°C for 30 s, primer annealing at 72°C for 90 s, and extension at 72°C for 5 min. Then 50 μL of amplified product and 100 μL of hybridization reagent solution B were added and mixed; 25 μL of the mixture was distributed in the wells of a microtitering plate incubated at 37°C for 60 min. The mixture was washed at 37°C for 15 min using 100 μL of the hybridization reagent solution C, followed by addition of 25 μL of solution A and B in microtitering and incubation at 37°C for 15 min. Finally, 2 μL of stop reagent was added. The value in each well was read at the wave length of 450 nm. The negative control value was considered as 0.05. Sample’s value ≥ 2.1 times of the negative control was considered positive. Each sample was examined for more than twice. The final value was presented as mean ± SD, after analyzing with t test.

Results were expressed as follows. Statistical analyses were carried out with the software package SPSS11.0. The means of the groups were compared with repeated measures analysis of variance. P < 0.05 was considered statistically significant.

No significant difference in absorbance value of the control group and the NS-ODN group was observed (F = 0.013, P > 0.05), whereas a significant difference was observed compared to the Ans-hTERT group (F = 35.347, P < 0.01), thus indicating an obvious inhibition of cell growth caused by Ans-hTERT (Tables 1 and 2). This growth inhibitory effect was dose- and time-dependent (Figures 1 and 2). 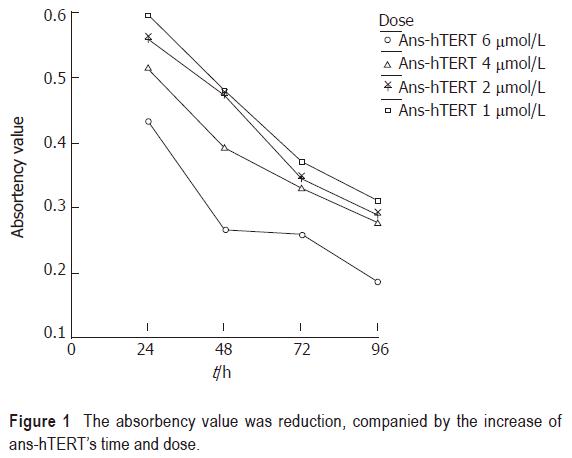 Figure 1 The absorbency value was reduction, companied by the increase of ans-hTERT’s time and dose. 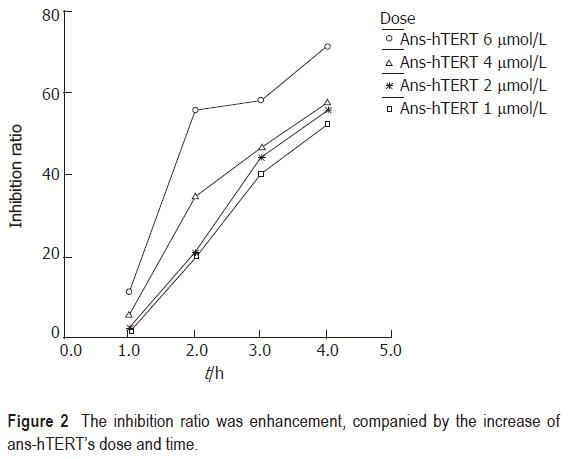 Figure 2 The inhibition ratio was enhancement, companied by the increase of ans-hTERT’s dose and time.
Effect of antisense hTERT ODNs on induction of Bxpc-3 cells apoptosis

After incubation of the cells with 6 μmol/L ans- hTERT for 72 h, the chromatin in the nucleolus was congregated, distributed in the karyotheca and appeared as half-noon type. The villus on the surface of karyotheca died away and came into being the big and small varied apophysis of vesicular shape. The cell appeared undergone apoptosis (Figure 3A and B). 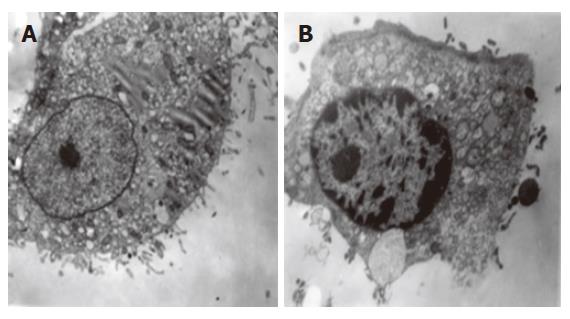 Telomeres form the ends of eukaryotic chromosomes consisting of an array of tandem repeats of hexanucleotide 5’-TTAGGG-3’. Telomeres protect the chromosomes from DNA degradation, end-to-end fushions, rearrangements and maintain nuclear structure[24]. Human telomerase is a ribonucleoprotein complex, composed of a catalytic reverse transcriptase subunit (hTERT), an RNA component (hTR) that serves as a template for the synthesis of telomeric repeats, and an associated protein subunit (TP1)[10,12,25]. It adds telomeric repeats to the 3’ end of telomeric DNA. This telomere stabilization by telomerase can lead to unlimited cell proliferation. Therefore, inhibition of telomerase activity will be a new therapeutic modality for cancer[26-32]. In most researches, the target gene was hTR, which is the replication template for telomere, but not the regulatory region of hTERT, the most important region which regulates the activity of tolemerase. Studies have reported that anti-hTR complementary to the template region of hTR is sufficient to inhibit P3 cell telomerase activity and cell proliferation in vitro[3,33]. But the expression level of hTR has no relation with the tumor’s development. Most current studies have proposed that reactivation of telomerse is a critical step in tumorigenesis[34-38]. There is a close correlation between hTERT and telomerase activity. Several researchers, using ISH techniques, have demonstrated high levels of hTERT expression in malignant tissues but not in non-malignant tissues. Du et al[39] showed that the telomerase activity was correlated with the cell growth. Our findings also revealed a good correlation between the inhibition of telomerase activity and reduction in cell growth. However, in our study, the cell growth inhibition was mainly the result of cell cycle arrest, not the increased cell apoptosis rate.