AIM: To investigate the efficacy of angiotensin II receptor antagonist on hepatic stellate cells (HSCs) activation in the patients with non-alcoholic steatohepatitis (NASH).

METHODS: Seven patients with NASH were prescribed losartan, a selective angiotensin II type 1 receptor antagonist (50 mg/d) for 48 wk. Liver biopsies were performed both at the entry and end of the study in all patients. Quiescent and activated HSCs were identified by double immunostaining using anti-p75 and α-smooth muscle actin antibodies, and the number of each phenotype was counted. Similarly, the liver specimens obtained from the eight patients with non-alcoholic fatty liver (NAFL) were also examined as controls.

RESULTS: In NASH hepatic tissues, activated HSCs were dominantly distributed as compared with those in NAFL. The 48-wk losartan treatment induced a remarkable decrease in activated HSCs and a mild increase in quiescent phenotypes.

CONCLUSION: Our data suggest the crucial involvement of HSCs in anti-fibrotic effect of angiotensin II receptor antagonist on patients with NASH.

Non-alcoholic steatohepatitis (NASH) is a distinct clinical entity characterized by steatosis, varying degrees of lobular inflammation and fibrosis in the liver, and this disease can potentially progress[1,2]. Previous data showed that about 20% of the patients developed to liver cirrhosis[3] and several cases of hepatocellular carcinoma are related to NASH[4]. Although the causes of NASH are not well defined, hepatic stellate cell (HSC) is suggested to play a pivotal role in the progression of hepatic fibrosis as other chronic liver diseases[5,6]. Stimulated HSCs transform into myofibroblast-like cell, and produce a large amount of extracellular matrix components, resulting in the formation of fibrosis[7]. However, to our knowledge, the efficacy of any treatments for NASH on the activation of HSCs has not been reported yet. Recently, we have demonstrated that losartan, a selective angiotensin II type 1 receptor antagonist, improved hepatic necroinflammation and fibrosis in patients with NASH[8]. Based on our results, we hypothesized that an angiotensin II receptor antagonist inhibits the progression of hepatic fibrosis through the inactivation of HSCs in NASH. In this study, we, therefore, investigated the efficacy of long-term losartan treatment on HSCs in patients with NASH.

Seven patients with both NASH and hypertension, which was defined as a systolic blood pressure over 140 mmHg and/or a diastolic blood pressure over 90 mmHg, and eight patients with non-alcoholic fatty liver (NAFL) were enrolled into this study. A detailed alcohol history was taken by at least two physicians and confirmed by at least one close relative who lived with the patient. All patients consumed less than 40 g of alcohol per week, and were negative for hepatitis B serological tests, antibody to hepatitis C virus or any autoantibodies, including anti-nuclear antibody, and anti-mitochondrial antibody. Serum ceruloplasmin and α1-antitrypsin levels were normal in all patients. Four patients in NASH group and three in NAFL group were obese (body mass index  > 25); four in NASH and one in NAFL had diabetes mellitus; two in NASH and four in NAFL had impaired glucose tolerance; three in NASH and four in NAFL had hyperlipidemia; and one patient in each group had hyperuricemia. Four of eight patients with NAFL group had hypertension.

At the entry of the study, some of the patients had already been on medication, including benzodiazepines, calcium antagonists or anticoagulants for at least 12 mo. These therapeutic regimens were not changed after an induction of losartan treatment in patients with NASH. No patient was taking any angiotensin converting enzyme inhibitors or angiotensin II receptor antagonists before the study. Laboratory examination showed abnormally high serum transaminase and γ-glutamyl transpeptidase concentrations in all patients. A liver biopsy was performed prior to entry the study, which revealed a moderate to severe lobular steatosis in both groups. On the other hand, various degrees of hepatic necroinflammation and fibrosis were demonstrated only in NASH group. After the estimation at the entry, patients with NASH were prescribed losartan at a dose of 50 mg/d for 48 wk, and a physical and laboratory examination were monitored every 4 wk. A liver biopsy was repeated at the end of the study in the patients with NASH. The Ethical Committee of Asahikawa Medical College for Clinical Study approved all protocols, and informed consents were obtained from all patients.

Hematoxylin & eosin and Azan stainings were performed on fixed histological sections. Two experienced hepatopathologists graded necroinflammation and staged fibrosis in a blinded fashion according to the Grading and Staging system of NASH proposed by the American Association for the Study of Liver Diseases[9]. To identify HSCs, double immunostaining was performed using monoclonal anti-p75 (a low affinity nerve growth factor receptor) antibody (Novocastra, Newcastle, UK) and monoclonal anti-α-smooth muscle actin (α-SMA) antibody (Dako, Kidlington, UK) as previously described[10,11]. Color development was achieved with BCIP/NBT for p75 and DAB for α-SMA, and counter-staining was performed using direct fast red. Activated HSCs were distinguished from quiescent HSCs by their myofibroblast-like form and the disappearance of fat vesicles in cytoplasm[7]. The numbers of both activated and quiescent HSCs were blindly counted by two independent pathologists and averaged in five fields per slide at ×200 magnification.

Before the study, serum γ-glutamyl transpeptidase, type IV collagen 7 S and fasting blood glucose levels in NASH group were significantly higher as compared with NAFL group. Although body mass index, serum transaminase, hyaluronic acid, ferritin and triglyceride levels in the NASH group tended to be higher as compare with the NAFL group, there was no statistically significant difference (Table 1). No side effect was noted, and the body mass index was unchanged during the losartan treatment in patients with NASH. The necroinflammatory grade and stage of fibrosis diagnosed by liver biopsies were improved after losartan treatment [for grade: pretreatment, 2(1-3), posttreatment, 1(1-2), P < 0.05; for stage: pretreatment, 3(1-4), posttreatment, 2 (1-4), P < 0.05]. 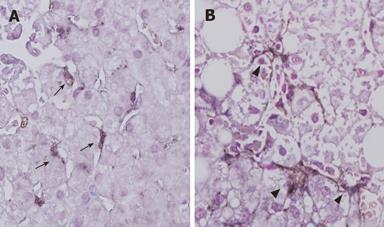 Figure 1 Expression of HSCs in patients with NASH and NAFL (× 400). Liver sections were immunostained with both monoclonal anti-p75 antibody and monoclonal anti-α-SMA antibodies. Although most perisinusoidal HSCs were quiescent form (arrow heads) in NAFL, a number of arrow head were detected in the patient with NASH (arrow heads). 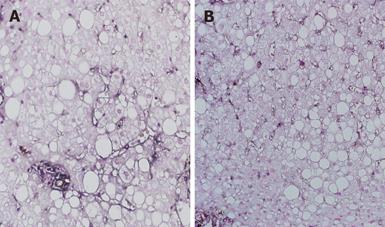 Figure 2 Significant decrease of activated and quiescent HSCs by 48-wk losartan treatment in a patient with NASH (double immunostaining with anti-p75 and α-SMA antibodies, × 200). 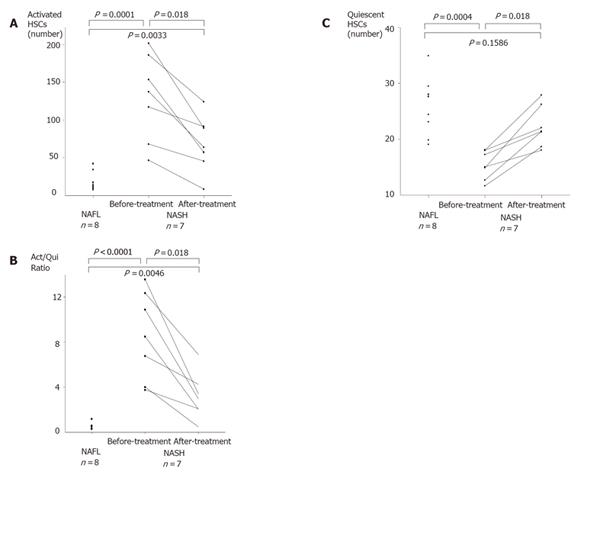 Although detailed mechanisms for the suppressive effect of angiotensin II receptor antagonist on HSC activation could not be well defined in this study, we hypothesize that there are two different pathways. The first may be the direct inhibition to HSCs. Studies have revealed that an activated HSC expresses angiotensin II type 1 receptor[13], and synthesizes angiotensin II by itself[14]. Locally generated angiotensin II enhances the activation and proliferation of HSCs through autocrine and paracrine mechanisms[15]. Losartan inhibited activated HSCs possibly through the blocking of angiotensin II type 1 receptors expressed on the surface of HSCs. In accordance with this mechanism, angiotensin II receptor antagonist may have a therapeutic efficacy on other chronic liver diseases that HSCs are involved in the progression of hepatic fibrosis, including viral hepatitis, alcoholic liver injury, or autoimmune liver diseases[16-18]. Actually, Terui et al [19] reported that losartan improved the hepatic fibrosis in chronic type C hepatitis.

Another mechanism of the angiotensin II receptor antagonist may be the indirect inhibition of HSCs mediated through the improvement of hepatic necroinflammation. Chronic hepatic inflammation enhances the production of transforming growth factor-β1 (TGF-β1) from Kupffer cell and inflammatory cells[20]. TGF-β1 is a multifunctional and ubiquitous cytokine, and in chronic liver diseases, this peptide plays a causative role in hepatic fibrogenesis through the activation of HSCs. We demonstrated that the patients with NASH had elevated plasma TGF-β1 levels that were reversed by α-tocopherol[21]. Moreover, we have recently reported that losartan improves hepatic necroinflammation concurrently with a reduction of plasma TGF-β1 levels in the patients with NASH[8]. Angiotensin II is known to aggravate several pathogenic factors of NASH, such as insulin resistance, oxidative stress and hepatic iron overload[22-24]. In fact, our previous studies demonstrated that serum ferritin levels were significantly decreased and hepatic iron deposition disappeared in some patients with NASH after losartan treatment[8]. Angiotensin II receptor antagonist may also suppress the HSC activation through the decrease of TGF-β1.

In conclusion, inhibiting the action of angiotensin II by losartan results in a remarkable depletion of activated HSCs and a mild increase of quiescent HSCs, thereby suggesting the important involvement of HSCs in anti-fibrotic effect of angiotensin II receptor antagonist on the patients with NASH.