Only six cases of extended surgical resections for XGC with direct involvement of adjacent organs have been reported so far. In these cases, given the possible coexistence of XGC with carcinoma, malignancy cannot be excluded, even after cytology and intraoperative frozen section investigation. In conclusion, due to the poor prognosis of gallbladder carcinoma on one side and possible complications deriving from highly aggressive inflammatory invasion of surrounding organs on the other side, it seems these cases should be treated as malignant tumors until proven otherwise. Clinicians should include XGC among the possible differential diagnoses of masses in liver hilum.

The term xanthogranulomatous cholecystitis (XGC) describes a rare inflammatory lesion of the gallbladder, characterized by marked proliferative fibrosis and infiltration of macrophages and foam cells involving the wall of the gallbladder[1]. Although a fair number of cases of this pathological condition have already been described, so far very few reports have described XGC with aggressive tumor-like inflammation pattern directly involving adjacent structures and organs[2-7].

We herein report a case of XGC presenting as advanced gallbladder carcinoma with involvement of liver, common bile duct, duodenum and transverse colon, review the characteristics of patients with XGC involving adjacent organs who underwent extended surgery, and discuss the different diagnostic and surgical options in cases of massive extra-gallbladder involvement.

A 46-year-old woman with no prior medical history was admitted to a local hospital due to progressively increa-sing upper abdominal discomfort for some weeks, lately associated with jaundice. No weight loss was reported. No mass was palpable at the physical examination. Ultrasound showed a gallbladder hydrops with gallstone in the infundibulum and bilateral dilation of intrahepatic bile ducts. An endoscopic retrograde cholangiography (ERC) demonstrated a filiform stenosis of the proximal common bile duct and the bifurcation with upstream intrahepatic bile duct dilation, and no visualisation of cystic duct and gallbladder. A complete sphincterotomy was performed with insertion of an internal stent draining the left main bile duct. Magnetic resonance imaging (MRI) confirmed the presence of a hilar mass with two liver lesions in the right lobe of the liver, suspicious of metastases. MRI-vascular reconstruction excluded an infiltration of the portal vein and the hepatic artery. The patient was then transferred to our clinic with the diagnosis of advanced gallbladder cancer with differential diagnosis from Mirizzi’s syndrome type I (i.e., secondary stenosis of the common hepatic duct caused by inflammatory fusion of gallbladder infundibulum and common bile duct due to gallstone impaction, without presence of a fistula). On admission to our centre, the patient was icteric after internal drainage of the left and common bile duct. Serum concentrations of total bilirubin (4.2 mg/dL, ref <1.1 mg/dL), alkaline phosphatase (325 U/L, ref <170 U/L), gamma glutamyl transpeptidase (55 U/L, ref <18 U/L), were all elevated. The tumor marker carbohydrate antigen 19-9 (CA19-9) was 42 U/mL (ref <33 U/mL) while carcinoembryonic antigen (CEA) was normal. We repeated ERC (Figure 1A) to attain cytological material and removed the internal stent. Brushing cytology revealed atypical epithelial cells with high-grade dysplasia. Computed tomography (CT-scan) with liver volumetry (Figures 1B, 1C) confirmed the presence of two hypodense lesions in the right liver lobe, suspicious of metastases, already detected by the MRI performed in the first hospital. Clinical, serological, cytological and imaging data were highly indicative of malignancy. Surgical exploration confirmed the diagnostic findings (Figure 2A): the mass completely involved the hepatic hilum, the transverse colon and the second duodenal portion, seeming to originate from the gallbladder bed, since the gallbladder itself was not distinguishable from the surrounding inflammatory tissue. The preoperatively suspected liver metastases were intraoperatively identified as hemangiomas. Assuming an advanced gallbladder carcinoma, we performed an anatomic right lobectomy en-bloc with gallbladder and extrahepatic bile duct resection, segmental duodenal resection, right hemicolectomy and partial omentectomy. Reconstruction was achieved by a hepaticojejunostomy protected by transhepatic drainage through the left biliary system, and an ileotransversostomy. Gross examination of the specimen (Figure 2B) demonstrated a bright white, hard mass, inseparable from the adjacent structures. A 2.5 cm × 3 cm × 2.5 cm biliary stone was packed in the infundibulum of the gallbladder. Histological examination unexpectedly revealed a xanthogranulomatous cholecystitis (Figure 3A), with tumor-like inflammatory tissue invading the liver as well as the proximal common bile duct, the right flexure of the colon (Figure 3B) and the second duodenal portion, with no evidence of malignancy. 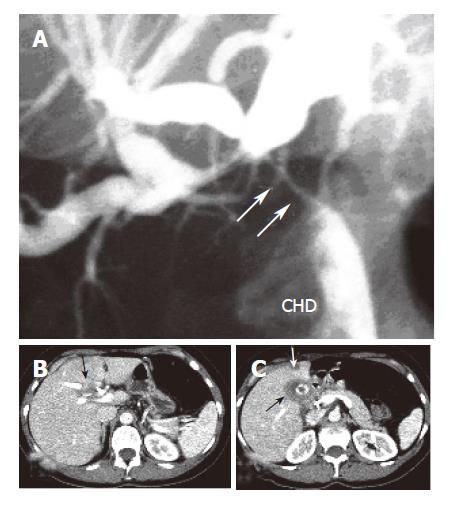 Figure 1 Proximal obstruction (arrows) of the common hepatic bile duct (CHD) with upstream dilatation of both left and right intrahepatic bile ducts (A), a soft tissue mass at the hepatic hilum (B), and thickened gallbladder wall (black arrow) with a concretion and hepatic lesion in liver segment 4 (C).

Figure 2 Intraoperative finding in situ (A) and surgical specimen ex situ (B).

XGC is found after approximately 1.46% of cholecystectomies and affects men and women equally[8], almost always in presence of gallstones (91%-100%)[1]. Even if aetiology is unknown, some authors suggest that in the presence of gallstones, obstruction, and cholestasis, XGC results from the extravasation of bile into the gallbladder wall. With involvement of Rokitansky-Aschoff sinuses[8], the pro-cess is supposed to start as an initial inflammatory pro-cess, followed by a granulomatous reaction, similarly to the aetiopathogenesis of xanthogranulomatous pyelonephritis, in which chronic infection and calculi are common findings. Macroscopically, XGC is characterized by formation of multiple yellowish nodules within the gallbladder wall. Histologically, abundant so-called foam-cells (histiocytes) are mixed with chronic and acute inflammatory cells[9]. With regard to imaging of a liver hilar mass, ultrasound, CT, MRI and ERC can be considered. In the case of XGC, ultrasound can detect focal or diffuse thickening of the hyperechoic gallbladder wall[10] with the presence of characteristic intraluminal hypoechoic nodules in 35-73% of the cases[11]. Other commonly reported findings are cholecystitis-like fluid collections near the gallbladder and dilation of intra- and extra hepatic bile ducts in case of choledocolithiasis. Chun et al [12] analyzed CT-patterns of XGC in a series of patients, with emphasis on differential diagnosis of gallbladder carcinoma and stated that intramural hypodense nodules occur more often in XGC than in cancer patients. However, these characteristic findings are inconstant in patients with XGC, as highlighted by more recent studies[11,13-14]. Visualisation of the biliary anatomy through direct (percutaneous or endoscopic) cholangiography or magnetic resonance cholangiopancreatography (MRCP) is particularly important if a direct involvement of the common bile duct is suspected. Furthermore, ERC allows brushing cytology. The potential role of positron emission tomography in the differential diagnosis of cholecystitis from gallbladder carcinoma is unclear, because only a few studies in small series are available up to now[15,16] with a patient with XGC being the only false positive case in one study[15].

Concerning tumor markers, our patient had only a slightly elevated (42 U/mL) serum level of CA 19.9 (reference = 33 U/mL), which persisted even after resolution of jaundice through placement of an endoscopic stent preoperatively. Adachi et al [17] argued that serum-CA 19.9 may be elevated even greatly in both carcinoma and XGC patients, thus being not helpful in the differential diagnosis between the two conditions. Even in cases of XGC with extended involvement of other organs[3,5] elevations of tumor mar-kers concentrations (CA 19.9, CEA) are inconsistent.

Although XGC is not an exceptional finding, a direct involvement of extra-gallbladder organs and structures is very rare. To the best of our knowledge, only six cases of extended surgical resections for XGC have been reported so far. In these cases (Table 1), additional procedures such as bile duct resections, segmental resections of colon or duodenum, partial pancreatoduodenectomies have been performed. It can be discussed if such extended surgical procedures could be avoided in presence of a benign dise-ase. Our patient exhibited severe, destructive, tumor-like xanthogranulomatous inflammation, with extensive invasion of adjacent organs (right lobe of the liver, extrahepatic bile ducts, colon and duodenum). The clinical and radiological findings were suggestive of a gallbladder carcinoma. ERC was indicative of hilar cholangiocarcinoma (Klatskin tumor). However, after confrontation with CT findings (gallbladder hydrops, gallbladder wall thickened over 1.8 cm, presence of suspect lesions in the right liver lobe, suspected infiltration of adjacent organs- all uncharacte-ristic findings in cases of Klatskin tumors), the most pro-bable diagnosis was a locally advanced gallbladder cancer, with infiltration of the proximal common bile duct and the bile duct bifurcation. In addition, cytology obtained during ERC showed high-grade dysplasia and CA 19.9 was slightly but persistently elevated after stenting. Under these conditions, a radical resection of the mass was the only reaso-nable option. According to the published data on gallbladder cancer and hilar cholangiocarcinoma, radical surgery offers the only chance to achieve long-term survival[18-23]. The necessity of radical surgery in those cases of XGC with extensive extra-gallbladder involvement is not cleared. We agree with Houston et al [24] emphasizing the necessity of a complete resection of the involved structures in order to treat symptoms like jaundice and cholangitis and to prevent possible complications like bowel obstruction and perforation, potentially life threatening.

Intraoperative frozen section investigation or fine needle aspiration cytology has been suggested to confirm the diagnosis. In cases with no invasion of adjacent organs these tools are indicated because they can change the surgical strategy (e.g, simple cholecystectomy versus associated liver resection). Nevertheless, in cases of extensive invasion of other organs, like in our patient, it can not alter our approach. Even in the case of a negative or inconclusive result, radical surgery can be performed since gallbladder carcinoma and XGC may coexist [24-26] and the patient had jaundice and cholangitis, which needed a treatment. Furthermore, even assuming an advanced gallbladder carcinoma, we believe it is essential to minimize the intraoperative tumor cell spread by avoiding any unneeded manipulation or dissection in the liver hilum.

Two different risks are linked to misjudgement of this pesudotumoral condition. On the one hand, exce-ssive surgical resection is inevitably linked with a certain perioperative mortality and morbidity. On the other hand, this condition may be misinterpreted as not being radically operable. Especially in this latter case, before deciding for inoperability, it is essential to gain specimens for frozen section biopsy.

In conclusion, preoperative or intraoperative differential diagnosis of XGC from gallbladder carcinoma remains a challenge, especially in patients with extensive pseudotumoral involvement of surrounding structures and organs. From our point of view, radical resection is mandatory as long as malignancy can not be ruled out after a complete preoperative diagnostic examination. Preoperative fine needle aspiration biopsy and intraoperative frozen section are valuable tools for differential diagnosis when there is no invasion of adjacent organs, otherwise they would not influence the surgical strategy. The presence of symptoms such as jaundice and cholangitis, as well as the potential risk of life-threatening complications like bowel obstruction and subsequent perforation, supports a radical surgical approach.