CONCLUSION: EPEN is a safe and beneficial opportunity for patients who have undergone DHP for a peri-ampullary mass.

Postoperative nutritional support was shown to reduce the incidence of complications and/or to shorten the hospitalization period[1,2]. Recently, early postoperative enteral nutrition (EPEN) has been proposed as the novel method for nutritional support after surgery, especially after gastric and colorectal resection[3-9]. Several studies suggested that EPEN possibly improves also the postoperative outcome of patients after duodenohemipancreatectomy (DHP)[10-13], which is one of the most invasive operations in the upper abdominal surgery with a high incidence of postoperative complications[14-19]. Whereas, EPEN has been introduced with complications such as troubles of jejunal feeding tube and delayed gastric emptying[10-13,20,21]. Taken together, the overall benefit of EPEN after DHP remains controversial.

The purpose of the present study was to evaluate the influence of EPEN on the incidence of postoperative complications. Moreover, by analyzing a variety of clinical parameters including laboratory data, body mass index (BMI), and the duration of hospitalization, we attempted to determine which method of postoperative nutritional support, enteral or non-enteral, was more advantageous in the total management of patients who had undergone DHP.

We investigated a total of 39 patients who had undergone DHP for a peri-ampullary mass from 2000 to 2005 at Kochi Medical School, including 24 men and 15 women (mean age of 67.5 years; 43-82 years). Among these 39 patients, there were 14 cases of pancreatic invasive ductal carcinoma, 11 of cholangiocarcinoma, 7 of intraductal papillary mucinous neoplasms, 4 of carcinoma of the papilla of Vater, 1 of gastrointestinal stromal tumor, 1 of primary sclerosing cholangitis, and 1 of metastatic renal cell carcinoma (Table 1). All patients underwent a complete perioperative physical examination and laboratory investigations. Moreover, a variety of relevant parameters regarding the operative procedure and anesthesia were recorded in all cases.

In all patients, the reconstructive technique was used to anastomose the pancreas first, followed by the hepatic duct and the duodenum with a Braun anastomosis. The pancreatic-enteric anastomosis was performed as a pancreaticojejunostomy in an end-to-side fashion. In patients of the EPEN group, a feeding jejunostomy catheter was placed at the end of surgery and before closing the wound through the anterior wall of the stomach using a modified Witzel technique. Furthermore, in all cases of pylorus-preserving pancreaticoduodenectomy (PpPD), the gastrostomy tube was inserted from the afferent loop of the jejunum into the stomach for the purpose to prevent delayed gastric emptying.

We determined the amount of calories required for postoperative nutrition according to the Harris-Benedict equation[22]. Some patients received total parenteral nutrition and then started to have oral intake of nutrition usually between POD 7 and 14, as determined late postoperative enteral nutrition (LPEN) group. The second group of patients started to have EPEN through a catheter-feeding jejunostomy on POD 1 (within 24 h after surgery), as determined EPEN group. Enteral feeding was started at a rate of 20 mL/h and gradually increased by 10 mL/h a day up to the final rate (70 mL/h).

The operation time, blood loss volume, and amount of blood transfusion during and after the surgery were carefully recorded. Samples for laboratory investigations were taken on POD 1, 4, 6, and 14. The laboratory parameters included serum levels of total protein, albumin, total bilirubin, cholinesterase, alanine transaminase, aspartate transaminase, lactate dehydrogenase, alkaline phosphatase, gamma-glutamyl transpeptidase, amylase, urea nitrogen, and creatinine. The BMI was measured before surgery and on POD 6 and 14. Postoperative complications, including surgical site infection, leakage from anastomosis, pancreatic fistula, cholangitis, small bowel obstruction and delayed gastric emptying, were carefully monitored every day. The duration of hospitalization was defined as the time from the day of the surgery to the day of discharge. The progress of all patients, following their discharge from hospital, was monitored by our hospital.

We determined the occurrence of pancreatic fistula based on the following criteria: the concentrations of amylase and lipase in the drainage fluid being three times higher than that in the serum on consecutive PODs, and the drainage volume being more than 10 mL/d. Amylase and/or lipase concentrations in the serum and drainage fluid were checked on POD 1, 3, 4, 5, and 7, and twice a week thereafter[23-25].

We tested for statistical significance using the χ2 test, the Fisher’s exact test and the t test. P < 0.05 was considered statistically significant. Where appropriate, values were expressed as mean ± SD.

We retrospectively reviewed 39 patients who had undergone DHP between 2000 and 2004 at Kochi Medical School, and subdivided them into two groups, 23 patients in the LPEN group and 16 patients in the EPEN group (Table 1). Hospital mortality was 2.6%. There were no significant differences between the two groups in age, gender, and the incidence of underlying diseases.

PpPD was carried out in 26 cases and PD in 13 cases. The frequencies of PpPD and intra-operative radiotherapy (IOR) were significantly higher in the EPEN group than in the LPEN group, because we started IOR for all patients with pancreatic carcinoma in 2002 (P < 0.05). There were no significant differences between the two groups in other parameters (Table 2) including operation time, blood loss volume, and the proportion of patients who received blood transfusion including red blood cells in mannitol-adenine-phosphate solution (RC-MAP) and fresh frozen plasma (FFP).

The baseline preoperative values of all laboratory parameters were comparable between the two groups. In the postoperative course, however, several parameters showed a significant difference. The lymphocyte count decreased immediately after the operation (at POD 1) in both groups (Figure 1), which was more obviously seen in the EPEN group compared to the LPEN group (P < 0.05), probably due to the higher incidence of IOR (Table 2). However, during POD 1 and 4, lymphocyte count in the LPEN group continuously decreased, but increased in the EPEN group. There was no significant difference between the two groups in lymphocyte count at POD 4 and thereafter. The serum levels of albumin (Figure 2) and the total protein (data not shown) decreased immediately after the operation in both groups. However, albumin levels at POD 4, 6, and 14 (Figure 2) and total protein levels at POD 6 and 14 (data not shown) in the EPEN group were significantly higher than those in the LPEN group. These findings in the restoration of nutritional parameters were consistent with the alteration in BMI. Loss of BMI was significantly suppressed in the EPEN group as compared to the LPEN group (Table 3). 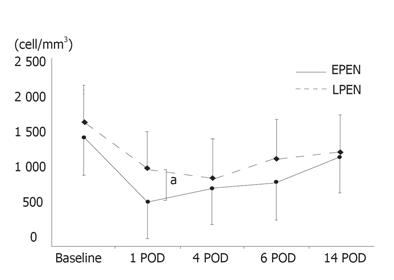 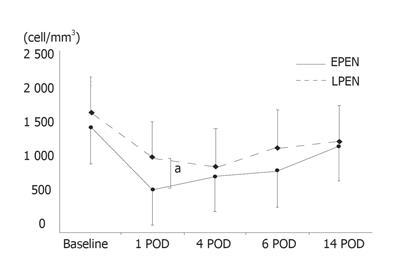 None of the cases had a complication of anastomotic leakage. The EPEN group had a significantly lower incidence of pancreatic fistula than the LPEN group (P < 0.05). There was no significant difference between the two groups in the incidence of other postoperative complications, including surgical site infection, ventral hernia, cholangitis, small bowel obstruction, and delayed gastric emptying (Table 3). Finally, the EPEN group also required a significantly shorter length of hospital stay than the LPEN group (P < 0.01).

In the present study, we employed 39 patients who underwent DHP and subdivided them into two groups according to the procedures of the postoperative nutritional support: the EPEN and LEPN groups. There was no significant difference in baseline profiles between the two groups except for the following two parameters, which should be considered in the analysis of the results. First, the number of patients with PD was greater in the LPEN group than in the EPEN group. EPEN after DHP was introduced in our department in 2002, in order to assess its utility. Until then, almost all patients who underwent PD for a peri-ampullary mass were postoperatively administered with total parenteral nutrition. However, we believed that there were no significant differences in the surgical procedure because two surgeons performed the pancreatic surgery in this study period. Second, the number of patients with IOR was much greater in the EPEN group than the LPEN group. The difference was caused by the fact that we started IOR for all patients with pancreatic carcinoma in 2002[26-28].

Although the serum levels of albumin and total protein dropped remarkably in all the patients after the operation, they recovered quickly in the EPEN group, and were significantly higher than those in the LPEN group at the early postoperative stage. Consistent with these findings, loss of BMI was significantly suppressed in the EPEN group as compared to the LPEN group. These findings indicate that EPEN modulates a metabolic response, favoring the synthesis of proteins. We believe that nutritional improvement observed in the EPEN group was not influenced by a large proportion of patients with PpPD (87.5%), since PpPD has been reported to provide a long-term nutritional support for operated patients but has not any benefit for nutritional status in early postoperative stage[29].

Furthermore, the lymphocyte count fell immediately after surgery in the EPEN group probably due to the IOR, resulting in the significantly lower level as compared to the LPEN group (P < 0.05). However, the lymphocyte count in the EPEN group increased thereafter, and reached at the similar level observed in the LPEN group at POD 14. These findings suggest that the administration of EPEN not only improves the nutritional status but also improves whole-body protein kinetics.

In conclusion, EPEN is a safe and beneficial procedure for patients who have undergone DHP. EPEN improves early postoperative outcomes, including nutritional status and whole-body protein kinetics. Furthermore, EPEN contributes to a significantly lower incidence of pancreatic fistula, resulting in a shorter duration of hospitalization compared to the LPEN group. Based on these findings, EPEN can provide regular postoperative nutritional support following DHP.