AIM: To study effect of operation-synchronizing transfusion of apoptotic spleen cells from donor rats on acute rejection of recipient rats after liver transplantation.

METHODS: Two of Wistar rats were chosen randomly for normal liver pathology control and ten of SD rats chosen randomly for liver function control as blank group (no operation). The rest of Wistar and SD rats were divided into four groups: control group (only liver transplantation), Dex group (donors receiving intraperitoneal injection of dexamethasone), SpC group (recipients receiving infusion of spleen cells of donors), Dex-SpC group (recipients receiving infusion of apoptotic spleen cells of donors), with each group except blank group, containing 10 SD rats and 10 Wistar rats, respectively. Wistar rats received liver transplantation from SD rats, in the meantime they received infusion of spleen cells of donors, which were induced by an intraperitoneal injection of dexamethasone (3 mg/(d.kg)·b.w ) for three days before liver transplantation. The serum alanine transaminase (ALT), total bilirubin (T bili), liver pathological changes and survival time were analysed. Statistical analysis was carried out using SPSS 10.0 for Windows. Differences of the parametric data of ALT in means were examined by one-way ANOVA. Differences of ALT between two groups were examined by LSD. Differences of the nonparametric data of T bili in means and scores of pathology classification for acute rejection were examined by Kruskal-Willis H test. The correlations between ALT and T bili were analysed by Bivariate. Kaplan-Meier curves were used to demonstrate survival distribution. The log-rank test was used to compare the survival data.

CONCLUSION: In order to reduce quantity of blood loss from rats after liver transplantation, only one of ALT or T bili is needed for liver function measurement of rats. Simultaneous injection of apoptotic spleen cells from donors induced by dexamethasone to liver transplantation rats aggravates acute rejection. One important mechanism of aggravation of acute rejection may be that apoptotic cells are not removed in time and that dead cells including apoptotic cells release inflammatory factors.

Ninety-two male clean-closed colony Wistar and SD rats (weighing 220-280 g) were purchased from Experimental Animals Center of First Military Medical University and Zhongshan University, respectively. Body weight of donors was a little less than that of recipients. Two of Wistar rats were used randomly for normal liver pathology control and ten of SD rats were randomly used for liver function control. The rest of Wistar and SD rats were divided into four groups: control group (only liver transplantation), Dex group (donor received intraperitoneal injection of dexamethasone, three days before liver transplantation), SpC group (recipients received infusion of spleen cells of donors), Dex-SpC group (recipients received infusion of apoptotic spleen cells of donors treated with dexamethasone three days before liver transplantation). There were ten SD rats and ten Wistar rats in each group in which liver transplantations were carried out, and SD rats received livers from Wistar rats. As a rule, rats were fasted 12 h, restrained from water for 30 min before operation and subcutaneous injection of atropine (0.04 mg/kg b.w.) was done 15-30 min before operation.

Methods of operation and preparation of suspension fluid of spleen cells

Rats were put into an instrument filled with vapor of diethyl ether and taken out after they became motionless for 3-5 s. Then, their heads were covered with centrifuge tubes filled with vapor of diethyl ether. Spleens of rats in corresponding groups were removed. Suspension fluid of spleen cells (1 mL, concentration 5×107/mL) was fabricated by routine method; also, its vital force was more than 95%. Modified two-cuff method of Kamada[13] was used in the course of rat liver transplantation. Suspension fluid of spleen cells was injected into recipients through dorsal veins of penis 30 min after portal veins of recipients reopened.

We observed general condition (body weight, appearance, activities, jaundice), liver function, liver histopathology, scores for acute rejection, and survival time after liver transplantation. ALT and T bili were assayed by CX7 automatic biochemistry analyzer with blood attained from tail veins on the seventh day after liver transplantation. Biopsy of livers of SD rats in each group were carried out by biopsy needle on the seventh day after liver transplantation. Liver tissue sample was fixed in 10% formaldehyde solution, embedded in paraffin, sliced up, stained in hematoxylin and eosin solution and observed under light microscopes. Scores of pathology classification for acute rejection were calculated according to Williams’ method[14,15].

Data were expressed as mean±SE. Statistical analysis was carried out using SPSS 10.0 for Windows. Differences of the parametric data of ALT in means were examined by one-way ANOVA. Differences of ALT between two groups were examined by LSD. Differences of the nonparametric data of T bili on means and scores of pathology classification for acute rejection were examined by Kruskal-Wallis H test. The correlation between ALT and T bili was analysed by Bivariate. Kaplan-Meier curves were used to demonstrate survival distribution. The log-rank test was used to compare the survival data in the whole and between groups. A P value <0.05 was considered statistically significant.

One rat died from bleeding of portal vein of donor post-operation in Dex-SpC group and blood could not be gained from the tail vein of one rat in each of blank control, Dex, SpC, Dex-SpC groups. All the rats in each group awoke after operation, could crawl at once, were fed with sugar solution in 60 min and with food after a day of liver transplantation. The rats ate little, became depressed and emaciated; moreover, the color of pinna and urine became dark yellow in Dex-SpC group from the seventh to the ninth day after liver transplantation. The same phenomena could be found in SpC group from fifteenth to seventeenth day, in Dex group from the third week to the fourth week, and in a few rats the fifth week after post-operation. 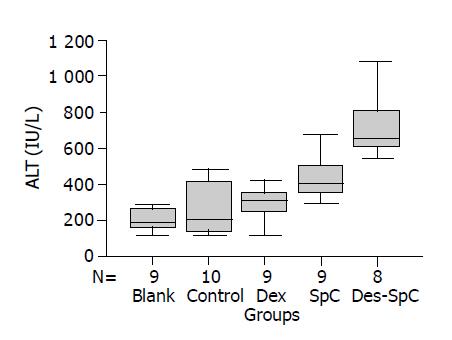 Results of T bili could not meet the condition of analysis of variance (Figure 2, Table 1). Result of nonparametric analysis of T bili showed that there were differences in TBil of the five groups (χ2 = 33.265 P = 0.000). T bili in Dex-SpC group was significantly higher than that in blank control, control, Dex group, and SpC groups and that T bili in SpC group was higher than that in blank control, control, and Dex groups. 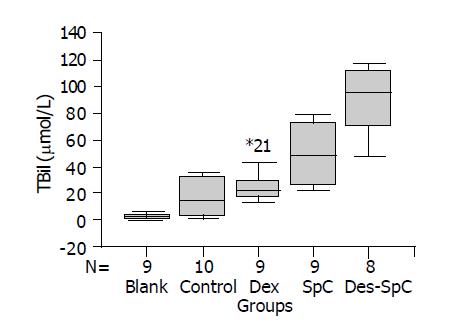 Analysis of correlation of ALT and Tbili showed that there were significant positive correlations (r = 0.747, P = 0.000, two-tailed) between them. 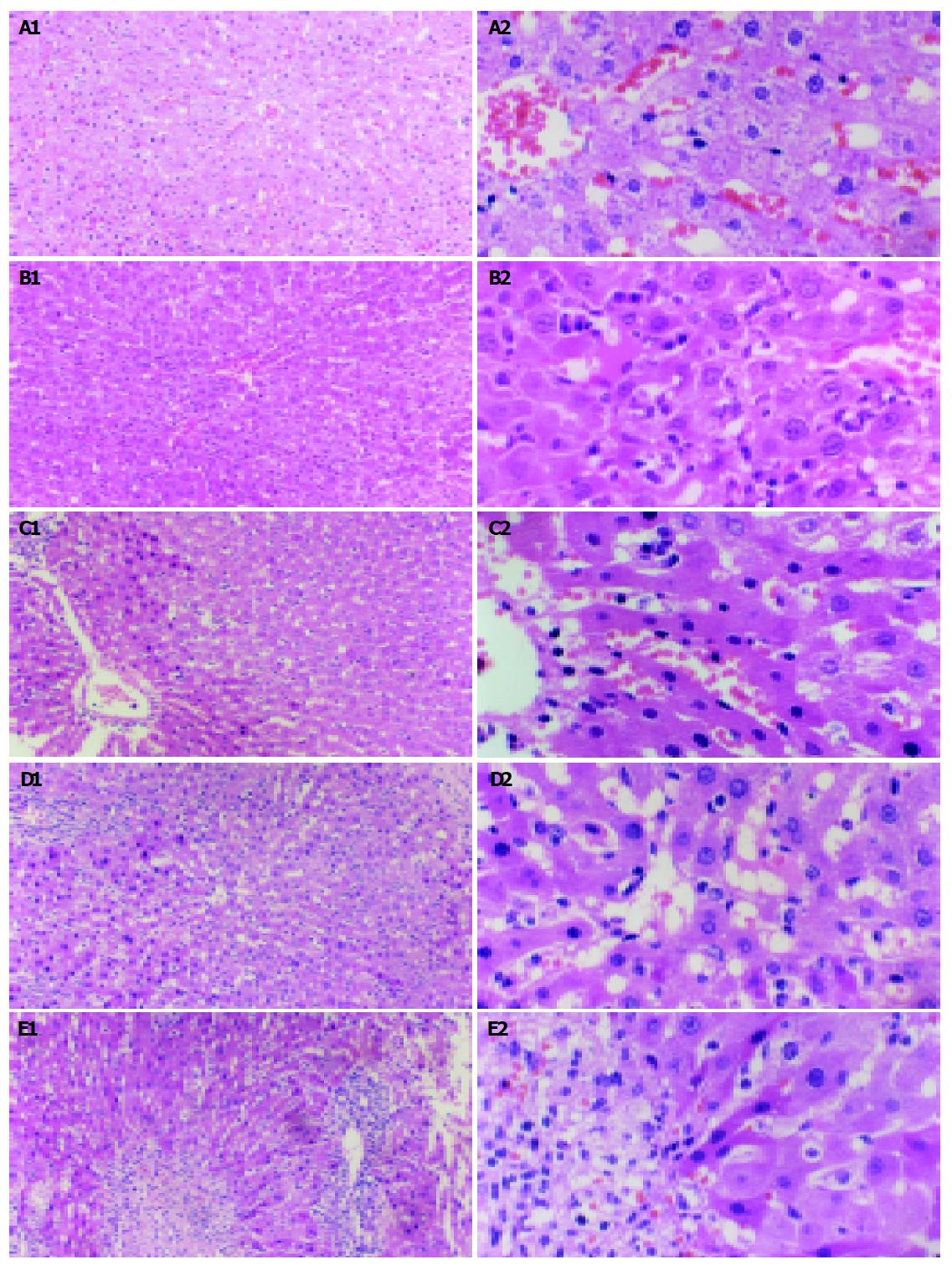 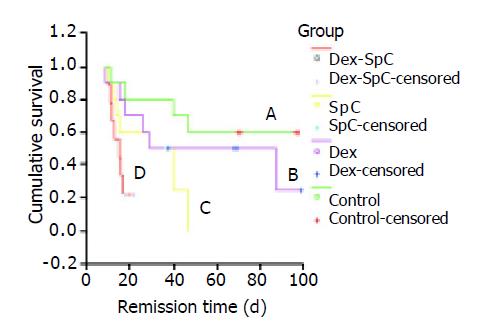 Antigens of donors are injected into recipients, resulting in different outcomes from promoting immune response to immune tolerance. The survival time of grafts of pancreas, heart and skin were prolonged obviously after the dendritic cells from donors’ livers were injected into recipients before transplantations[16]. The survival times of grafts were also prolonged obviously after marrow or spleen cells were injected into recipients before transplantations[17]. Starzl[18], using microchimerism believed that the graft was alive longer because the recipient had formed microchimerism by antigen of the donor injected before. There have been numerous studies on apoptosis[19]. Our experiment showed that transfusion of spleen cells from dexamethasone-treated donor to recipients before liver transplantation could prolong the survival time of grafts and that some recipients could live a long time, indicating successful tolerance induction of rat liver transplantation[8]. We speculate that liver is a special place where apoptotic cells are phagocytized. Apoptotic cells inhibit immunity in local places where they are accumulated. The antigen-presenting cells (APCs) that phagocytize apoptotic cells present to T cells in inhibited circumstance induce immune tolerance[4].

DCs can phagocytize apoptotic cells. But there is dispute about whether this phagocytosis could cause immune tolerance or response[20]. Hawiger et al[21], found that DCs’ antigen-presenting could lead to immune tolerance. The results of liver function, pathology and survival time in this experiment showed that operation synchronizing transfusion of apoptotic spleen cells from donor rats accelerated acute rejection of rat liver transplantation. It is almost impossible that operation synchronizing transfusion of apoptotic lymphocytes from donor would induce immune tolerance. The reasons are, maybe as follows: First, though the phagocytes in livers account for 80% of the total in human bodies, the function of phagocytes have been damaged because of warm and cold ischemic/reperfusion injury. Therefore, the phagocytes cannot phagocytize apoptotic cells immediately, and the apoptotic cells, which cannot be phagocytized at once become necrotic and release inflammatory factors such as TNF-α, IL-1β, IL-6 and IL-8 that can activate DCs[22],and make them mature. The ability of antigen presenting of APCs become stronger[23]. So an acute rejection happens[24-27]. Second, according to the theory of danger signal[28], there have been plenty of danger signals that resulted from warm and cold ischemic-reperfusion injury. Though the number of necrotic cells is less than 5%, there are 35% apoptotic cells[8], necrotic cells and apoptotic cells, which cannot be phagocytized at once release danger signals. The danger signals were so strong that APCs in recipients including DCs phagocytized the spleen cells of donors including necrotic cells and apoptotic cells and presented with antigens of donors, produced co-stimulatory molecules, accelerated acute rejection of rat liver transplantation finally (Figure 5). Third, the results of this experiment showed the acute rejection in the groups with injected spleen cells of donors treated or untreated was more serious than the groups without injected spleen cells. The spleen cells solution including DCs distributed the whole body because of blood circulation, activated the lymph organs and caused immune responses. On the other hand, immune responses depended on lymphocytes of the donor circulating to the liver of the recipient or the graft of liver releasing soluble antigens to blood circulation when only liver transplantation was carried out. 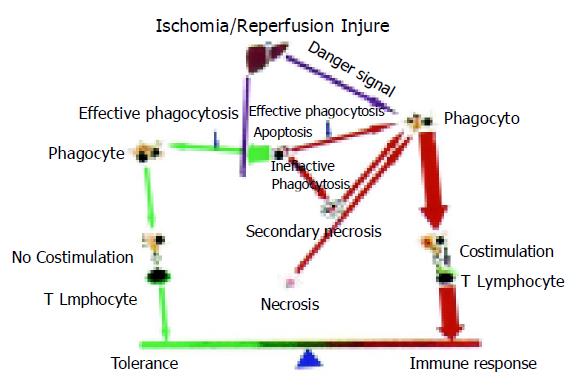 Because there was positive correlation between ALT and T bili, we can sample blood as little as possible so as to reduce effects of blood loss on survival time. Only one of ALT and T bili is needed to measure the liver function.

Also, because the Wistar and SD rats were purchased from different units and grouped randomly, we excluded the effects of difference of rats on the whole results. In this experiment, the survival time in the control group was longer than that reported in literature[8,29]. In order to find out the reasons, liver transplantations were carried out seven times by the same method using Wistar and SD rats provided by the same unit. The mean survival time was 11.1 d, significantly shorter than that of the Control group (P<0.01). There were no differences compared to that of Wang[8 ]. Therefore, we suspect that the gene of the SD rats might have been mutated or added to the gene of Wistar rats in the control group[30].