AIM: To assess the synergistic action of famotidine (FMD) and chlorpheniramine (CPA) on acetic acid-induced chronic gastric ulcer in rats.

CONCLUSION: The synergistic action of FMD and CPA on acetic acid-induced chronic gastric ulcer in rats decreases the incidence of ulcer and also enhances the healing of ulcer.

Peptic ulcer is a common disorder of the gastrointestinal system and the pathogenesis of peptic ulcer disease is multifactorial, including Helicobacter pylori, gastric acid, pepsin, gastroduodenal motility, smoking, use of nicotine, and complex interaction between so-called aggressive and protective factors[1]. Mast cells are initiators and regulators of inflammation. After mast cell degranulation, histamine causes the secretion of gastric acid by triggering H2-receptors, marked infiltration of inflammatory cells into the gastric mucosa, and expression of cytokines by triggering the H1-receptors. Consequently, mast cells are considered as important effector cells in the pathogenesis of gastritis, especially in H pylori-associated peptic ulcer[2]. Histamine H2-receptor antagonists that possess a potent antisecretory activity can greatly enhance the healing rate of peptic ulcers. However, after H2-receptor antagonist therapy peptic ulcer recurs rapidly and frequently. The possible reasons why the recurrence rate is high after H2-antagonist therapy are acid rebound after the cessation of treatment, deficiency in gastric defensive factors such as gastric prostaglandin levels, and low maturity of regenerated mucosa. Recently, H1-receptor antagonists are potent anti-inflammatory compounds. Erwin[3] reported that H1-receptor antagonists have anti-inflammatory activity, including their effects on eicosanoid production and cytokine release and their influence on the release rate of proinflammatory mediators. Cetirizine reduces the attraction of inflammatory cells to the inflammatory focus after the antigen challenge and inhibits the expression of the intercellular adhesion molecule 1 (ICAM-1) on the surface of epithelial cells[4]. It also might be able to block the antigen-induced production of leukotrienes (LTC4)[5]. Loratadine and its metabolite decarboethoxyloratadine inhibit the release of tryptase and amacroglobulin[6], interleukins (IL) 6 and 8[7], leukotrienes and prostaglandin D2 (PGD2)[8], and suppress the expression of ICAM-1 and of HLA-II antigens on the surface of epithelial cells[9]. Therefore, H1 and H2 blockers have not only antisecretory activity but also anti-inflammatory activity when they are used in the treatment of gastric ulcer. The aim of the present study was to assess the synergistic action of famotidine (FMD) and chlorpheniramine (CPA) on acetic acid-induced chronic gastric ulcer in rats.

Male Sprague-Dawley (SD) rats (180-220 g) were provided by the Medical Experimental Animal Center, Tongji Medical College, Huazhong University of Science and Technology (No: TJLA-2004-159). Animals were fed with standard laboratory chow and tap water, and kept in a room with constant humidity and temperature (25 °C) in a 12-h light-dark cycle for 1 wk before the experiments.

Gastric ulcers were induced using the method described by Takagi et al[10] with some modifications. Gastric ulcers were produced by the application of round filter paper (diameter: 5 mm) immersed in a 100% acetic acid on the serosal surface of anterior wall of the stomach approximately at the center of the corpus for 30 s and the process was repeated twice. This produced an immediate necrosis of the entire mucosa and submucosa (but not serosa) within the area (20 mm2), where the acetic acid was applied. The excess of acetic acid was then removed and the serosa was gently washed with saline. Control animals received no surgery. The abdomen was then sutured, and the animals were allowed to recover and returned to their cages with free access to food and water.

Two days after the ulcer induction, 40 male SD rats, weighing 180-220 g, were randomly divided into blank group (n = 8), control group (n = 8), FMD group (n = 8), CPA group (n = 8), FMD+CPA group (n = 8). Rats were given intraperitoneally (i.p.) 0.5 mL/100 g distilled water, 0.5 mL/100 g, 9 g/L NaCl saline, 4 mg/kg FMD, 10 mg/kg CPA, 4 mg/kg FMD+10 mg/kg CPA for 10 d. On d 8, the rats were deprived of food for 48 h prior to the experiment but allowed free access to water. After the last dose, each animal was anesthetized with 10 g/L sodium thiopental. Five milliliters of blood was collected by intracardiac puncture. Each sample contained 0.22 mL 6-keto EDTA, and was centrifuged for 15 min at 5 500 r/min. The plasma from each sample was stored at -80 °C for the determination of the level of interleukin IL-8 and 6-keto-PGF1a by RIA using IL-8 and 6-keto PGF1a kits, respectively. Subsequently, the abdomen was opened and the stomach was exposed after the esophagus and pyloric were ligated, and then 5 mL 40 g/L neutral buffered formalin was instilled into the stomach via the incision for pathological examination.

After being fixed in formalin overnight, the stomach was opened along the greater curvature and spread out with pins on a cork board, and then photographed. The ulcerated area (mm2)[11] was computed using the following equation: S = π(d1/2)×(d2/2), where S represents the ulcerated area (mm2), d1 and d2 represent the longest longitudinal and transverse diameters of the ulcer respectively.

After fixation, the stomach was divided into two parts and each part was subdivided into four tissue strips by cutting along the whole width of the half stomach. The blocks were embedded in paraffin wax. Five micrometer thick sections were cut in a standard fashion and stained with hematoxylin and eosin.

Radioimmunoassay (RIA) for IL-8 and 6-keto-PGF1a

The level of MPO in the liver homogenate was determined by biochemical methods with the MPO kits according to its manufacturer’s instructions.

All the values were expressed as mean±SD. One-way ANOVA was used to analyze the differences among them. Student's t-test was applied to comparisons between the two groups. P<0.05 was considered statistically significant. Software SPSS10.0 was used in all statistical analyses.

Microscopic findings on the gastric mucosal scar showed that the mucosal architecture of the scar healed by FMD+CPA group (Figure 1D) was better restored than that of the scar in the control group or in the case of treatment with FMD alone which exhibited much lymphocyte infiltration, and surface epithelial lesions (Figures 1A and B). 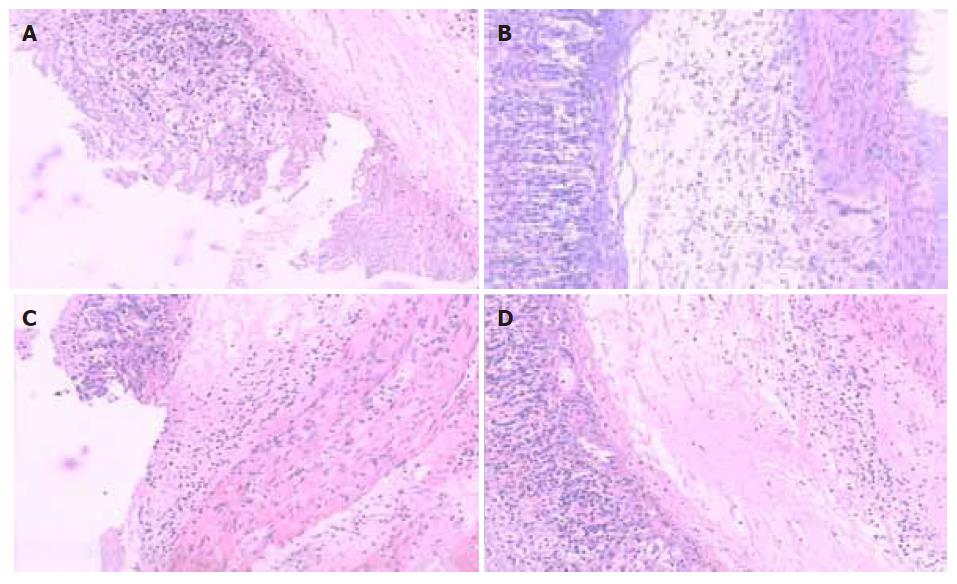 Figure 1 Pathological feature of gastric mucosa in the control group (A), FMD group (B), CPA group (C), and FMD+CPA group (D) under light microscope, HE ×200.
Plasma level of 6-keto-PGF1a

The plasma levels of IL-8

The acetic acid injection-induced ulcer model is a mature classical model. The drawback of the model is that the dose of injection is not rigorous. We used a round filter paper (diameter: 5 mm) immersed in a 100% acetic acid on the serosal surface to establish the model, which is characterized by high success rate, small coefficient of variation, low rate of perforation.

Prostaglandins (PGs) are well-known mucosal defense factors, protecting the gastric mucosa against injury caused by a variety of toxic stimuli[12,13]. PGE2 stimulates the secretion of gastric mucus and bicarbonate, increases mucosal blood flow, inhibits acid secretion, and reduces gastric motility. In addition, downregulation of proinflammatory cytokine expression by PGs is also likely to be important for mucosal protection against H pylori infection. 6-Keto PGF1a is a PGI2 metabolite, and PGI2 plays an important role in gastric cytoprotection. This study also approved that the ulcerated area decreased with the increase in the level of 6-Keto PGF1a and this supports that prostaglandins possess gastric cytoprotection function.

Gastric mucosal integrity is maintained by an interplay of some aggressive and defensive factors controlling cell apoptosis and proliferation. Disturbing this balance leads to ulcer. Proinflammatory cytokines play an important role. IL-8 is an important cytokine in the host inflammatory response to H pylori[14-16], which correlates with its induction in gastric epithelial cells co-cultured with H pylori in vitro[17-19]. Upregulation of IL-8 by H pylori may lead to free radical generation and the release of proteolytic enzymes from activated neutrophils, affecting mucosal integrity[20]. Eradication of H pylori in ulcer patients results in a reduction in antral IL-8 mRNA expression, neutrophil infiltration, and surface epithelial lesions[16], suggesting that inflammatory cytokines may play an important role in mucosal damage due to H pylori infection. Leukocyte infiltration in gastric mucosa is assessed by determining tissue activity of MPO[21], an enzyme used as a marker for leukocyte infiltration in a variety of tissues including the rat gastric mucosa. Recently, experimental data on H1 receptor antagonists demonstrate potentially anti-inflammatory effects in addition to their anti-allergic effects on histamine production, the histamine-induced response. Cook et al[22] reported that human conjunctival mast cells can be purified (>95%) from cadaveric tissues and that olopatadine inhibits anti-IgE antibody-mediated release of TNF-α from human conjunctival mast cells. Bakker[23] showed that the histamine H1 receptor, which is also an important player in allergic and inflammatory conditions, activates NF-κB in a constitutive- and agonist-dependent manner and that the observed constitutive NF-κB activation is inhibited by various H1-receptor antagonists, suggesting that inverse agonism may account, at least in part, for their ascribed antiallergic properties. Miki et al[24] showed that histamine concentration-dependently enhances the TNF-α-induced expression of E-selectin and intercellular adhesion molecule-1 (ICAM-1) in vascular endothelial cells. Arnold[25] suggested that cetirizine reduced the release of IL-8 from A549 cells stimulated with PMA and TNF-α, by lowering IL-8 gene expression. Modlin et al[26] reported that histamine may also act as an autocrine growth factor for ECL hyperplasia via H1 receptors. Therefore, histamine may be an important regulator of all gastric endocrine cells. It was reported that a high dose FMD administration significantly increases serum gastrin concentration and proliferates G and ECL cells[27] indicating that the synergistic action of histamine H1 receptor antagonists and histamine H2 receptor antagonists may reduce the incidence rate of carcinoids.

The present experimental study demonstrated that FMD, a H2 receptor antagonist, afforded against gastric ulcers. Chlorpheniramine, a H1 receptor antagonist could give partial protection. When both H1 and H2 blockers were given, they decreased the incidence of ulcer and also enhanced the healing of ulcers. At the same time, this study showed that H1-antagonists reduced the release of proinflammatory mediators (IL-8 and MPO) from mast cells in comparison with the controls. The synergistic effect indicates that H1 receptors play a role in gastric ulceration as the H2 receptors.