AIM: To investigate the change of bone parameters in a new model of experimentally induced liver cirrhosis and hepatocellular carcinoma (HCC) in growing rats.

METHODS: Fischer-344 rats (n = 55) were used. Carbon tetrachloride (CCl4), phenobarbital (PB), and a single diethylnitrosamine (DEN) injection were used. Animals were killed at wk 8 and 16. Bone mineral content, femoral length, cortical index (quotient of cortical thickness and whole diameter) and ultimate bending load (Fmax) of the femora were determined. The results in animals treated with DEN+PB+CCl4 (DPC, n = 21) were compared to those in untreated animals (UNT, n = 14) and in control group treated only with DEN+PB (DP, n = 20).

RESULTS: Fatty liver and cirrhosis developed in each DPC-treated rat at wk 8 and HCC was presented at wk 16. No skeletal changes were found in this group at wk 8, but each parameter was lower (P<0.05 for each) at wk 16 in comparison to the control group. Neither fatty liver nor cirrhosis was observed in DP-treated animals at any time point. Femoral length and Fmax values were higher (P<0.05 for both) in DP-treated animals at wk 8 compared to the UNT controls. However, no difference was found at wk 16.

CONCLUSION: Experimental liver cirrhosis and HCC are accompanied with inhibited skeletal growth, reduced bone mass, and decreased mechanical resistance in growing rats. Our results are in concordance with the data of other studies using different animal models. A novel finding is the transiently accelerated skeletal growth and bone strength after a 8-wk long phenobarbital treatment following diethylnitrosamine injection.

Metabolic bone disease is a common complication of chronic liver diseases[1-4]. However, the pathogenesis is not fully understood and is scarcely investigated in an animal model. Both increased bone resorption[5-7] and decreased bone formation[8-11] have been described in chronic liver diseases. Decreased bone density[10] and impaired microarchitecture[12] are associated with increased fracture risk[13]. Though several methods are available to examine different aspects of bone metabolism, there is not a single test to define the quality of bones. We have investigated how the bone mineral content (BMC), cortical thickness, bone length, and mechanical loading capacity of femora were changed during the development of experimentally induced fatty liver, liver cirrhosis, and HCC in growing rats. No published data are available on simultaneous measurements of these parameters in growing rats. We used a new cirrhosis model in this study. Our results are in concordance with those of other studies. Novel finding is the transiently accelerated skeletal growth and bone strength after a 8-wk long phenobarbital treatment following diethylnitrosamine injection.

MATERIALS AND METHODS
Animals and induction of liver diseases

A total of 60 male Fisher-344 rats, weighing 273.3±38.7 g, were included and 55 rats survived the study protocol. The animals were housed in steel cages (5 rats/cage) in an air-conditioned room with a relative humidity of 55%. Tap water and pelleted rodent chow (CRLT/N, Farmer Product Ltd, Hungary) were available ad libitum. The Animal Care and Use Committee of Semmelweis University, Faculty of Medicine approved all the animal procedures.

Fatty liver and liver cirrhosis were induced by the administration of CCl4 (0.5 mL/kg body weight, dissolved in sunflower oil, administered thrice a week by intragastric tube) and phenobarbital (PB, phenobarbital-Na; Sigma, St. Louis, MO, USA, tap water was replaced by 0.05% of PB-solution after a 12-h fasting, daily) throughout the 8-wk treatment following a single injection of diethylnitrosamine (DEN; Serva, Heidelberg, at a dose of 200 mg/kg body weight, dissolved in 0.9% NaCl solution). HCC developed at wk 16 as described earlier[14]. Animals were killed at wk 8 and 16 under light ether-anesthesia (all animals were fasted for 24 h prior to killing).

Livers were macroscopically and histologically investigated. Slices from the removed liver were fixed in 8% buffered formalin and embedded in paraplast. Picrosirius red, H&E, and PAS staining were used for histological examination[14]. Hepatic fibrosis, cirrhosis[15], and lesions[16] were classified according to the international recommendations.

Partial carcass preparation was performed. The left rear limb was carefully dissected free from the iliac acetabulum with the head of the femur preserved. Then, the isolated femur was prepared by dissecting from the tibia along with the remaining muscles and ligaments and stored in saline-soaked gauze at -20 °C until further testing.

Soft radiographs were performed using an X-ray imaging system (Siemens Mammomat 3000, Germany) with exposure at 25 kVp, 10 mAs on the femur. Femora were carefully positioned anteroposteriorly. Exposure period was 0.3 s. Exposed plates (Agfa, Germany) were analyzed using OSIRIS imaging software. Femoral length (mm) was measured and the values were validated by an aluminum phantom (1 mm in diameter). Each exposure included both the phantoms and the investigated bone. Cortical index was calculated: cortical thickness divided by the whole diameter at the mid-point of medial diaphysis.

Using an I-125 source (1 000 MBq initial activity from Nordion), a water-bath system (single photon absorption, SPA) device (NK364/A, Gamma Technical Corporation, Budapest, Hungary) was used to determine the BMC in mg/cm. A precise, replaceable and narrow collimator was made for the source holder for the in vitro animal experiments. Aluminum phantoms (Gamma Technical Corporation, Budapest, Hungary) were used for the calibration. The femora were fixed by sellotape on a water equivalent plastic sheet and then placed on the attenuation block. The attenuation block was 2 cm wide. BMC value was measured at the mid-point of the medial diaphysis.

Biomechanical tests were carried out by a computer-controlled testing device (Zwick-020, Zwick, Ulm, Germany) using the whole bone specimens. The anteroposterior three-point bending test of the femoral shaft was performed as previously described[17]. The femur was placed on a testing bearer, and the distance between the supporting rods was fixed at 15.7 mm. Force was elicited by a rod at a constant deformation rate of 2 mm/min at a right angle to the anterior midpoint of the femoral midshaft. We determined the ultimate bending load of the whole bone specimen (Fmax, N). The Fmax was corrected by BMC (load/density, N/mg/cm) and cortical index (described above, load/cortical index, N/mm/mm) of femoral midshafts avoiding the impact of BMC and cortical index on bone strength.

Mann-Whitney test was used for intergroup comparisons. Pearson’s parametric correlation test was applied for measuring the strength of a relationship between the two variables. P<0.05 was considered statistically significant. All statistical analyses were performed using SPSS version 10.0 for Windows (Chicago, IL, USA). Results were expressed as mean±SD.

Liver histology showed inflammatory cell infiltrates, necrosis, fatty changes, regenerating nodules and cirrhosis in DPC-treated rats at wk 8 (10 out of 10 rats). Neoplastic nodules were found in five samples. Cirrhosis and HCC (11 out of 11) developed in DPC-treated group at wk 16. Normal hepatic histology was found in all UNT and DP-treated control rats.

The femoral length increased in each group from wk 8 to 16 (Table 2, Figure 1A). However, animals treated with DPC had shorter femora than controls at wk 16. Femora were longer in DP-treated rats than in UNT controls at wk 8. Femoral length correlated with body weight (r = 0.824, P<0.001). 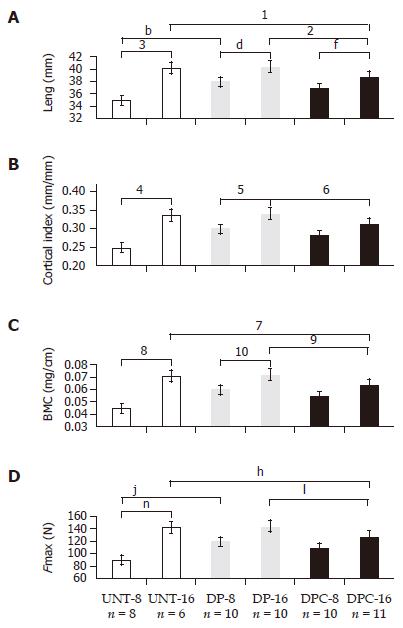 Using a new model, we have found that bone disorders due to diethylnitrosamine, phenobarbital, and CCl4 administration were characterized by decreased femoral length, reduced bone mass, and increased fragility after 16-wk long treatment in growing rats. Our findings on cortical bone mass are in concordance with other studies using different models of experimentally induced liver cirrhosis[18-21]. van der Merwe et al[22] found that the femoral length, the bone mass and the midshaft thickness were lower in CCl4-treated rats after portosystemic shunting. Muguerza et al[23] found that the femoral density, the anteroposterior and lateromedial diameters and the ultimate bending load decreased in CCl4-induced cirrhotic rats, but no significant differences were observed in the bone length. In our experiment, the age-dependent growth of femoral length, BMC and ultimate bending load were arrested as cirrhosis progressed and HCC developed. Tanaka et al[24] also found that longitudinal bone growth is reduced on the femora of rats with CCl4-induced liver cirrhosis. Decreased bone mineral density has been observed in growing rats with liver cirrhosis induced by the administration of CCl4 and phenobarbital[20].

In our study, DP-treated rats had longer femora and increased ultimate bending load than untreated control rats at wk 8, nevertheless BMC and cortical index did not differ from untreated controls. The stimulating skeletal effect of DP treatment at wk 8 might be caused by the enzyme inductor effect of phenobarbital. It is well known that phenobarbital induces not only xenobiotic-metabolizing cytochrome P450 (e.g. CYP2B1)[25] but also estrogen and vitamin D3 synthesizer cytochrome P450 enzymes (CYP19A1, CYP27A1 CYP27B1, CYP3A4, CYP2D)[26-28]. Therefore, the increased longitudinal bone growth and ultimate bending load in DP-treated rats may be the consequence of enhanced estrogen and vitamin D activation. However, the increase in ultimate bending load was stunted after 8 wk in DP-treated rats. It is possible that bone maturation has become adapted to the accelerated skeletal growth and mineralization after 8 wk. In DPC-treated rats, only a tendency towards both longitudinal bone growth and ultimate bending load was observed in comparison to untreated controls at wk 8, suggesting that the adverse skeletal effect of CCl4 does not allow to reveal stimulating effect of phenobarbital.

The biochemical parameters of liver function showed serious inflammation in DPC-treated rats at wk 8 corresponding to the histology showing fatty liver and inflammatory cell accumulation beyond the regenerating nodules. The decrease in serum albumin level at wk 8 in DPC-treated rats indicates the reduced synthetic capacity of the liver. Though biochemical and histological symptoms of steatohepatitis were present, it had no detectable negative effect on bone mass, bone length, cortical index and ultimate bending load at this time point, which is in concordance with results of van der Merwe et al[22] who did not find detectable bone disease in early stage liver dysfunction. Similar to human liver diseases, longer time is needed for the development of metabolic bone disease. Biochemical and histological signs of inflammation ceased in DPC-treated rats at wk 16, while fibrosis, cirrhosis with regenerative nodules and HCC foci dominated the histological picture. However, femoral length, BMC and ultimate bending load were stunted at this time point, which is in concordance with results of Figueiredo et al[29]. The mechanism is complex. The high level of hyperbilirubinemia detected at wk 8 could be one of the factors, since bilirubin has a direct inhibitory effect on osteoblast proliferation[30].

Bone fractures depend not only on BMC but also on bone quality, size and shape[31-33]. The decrease of Fmax at wk 16 clearly showed the altered bone metabolism. Since correlation was found between Fmax and cortical index, femoral length and BMC and there was no difference in Fmax/cortical index and Fmax/BMC ratios between the different groups, the increased fragility should be the consequence of stunted longitudinal and cortical growth and arrested mineralization in growing rats with liver cirrhosis and HCC.

The mechanism by which liver cirrhosis arrests skeletal growth and influences other features of bone metabolism is not fully understood. Whether the bone alteration is caused by a direct toxic effect of the applied agents on bones or it is a secondary consequence of the experimentally induced liver cirrhosis remains unknown.

In conclusion, experimentally induced liver cirrhosis and HCC are accompanied with inhibited growth, reduced BMC and cortical index and decreased mechanical resistance in growing rats. Our results are in concordance with the data of other studies using different animal models. A novel finding is the transiently accelerated skeletal growth and bone strength after a 8-wk long phenobarbital treatment following diethylnitrosamine injection.