CONCLUSION: Our experimental data provide a further mechanism for the involvement of the vitamin D signaling pathway in colonic epithelial cell differentiation by butyrate. The enhancement of 1α-25(OH)2D3 followed by antiproliferative effects of the vitamin D prohormone in the Caco-2 cell line suggest that 25(OH)2D3 in combination with butyrate may offer a new therapeutic approach for the treatment of colon cancer.

In addition to its well-known role in mineral and skeletal homeostasis, it is widely recognized that the physiologically most active molecular form of vitamin D3, 1α-25(OH)2D3, also re-strains cell proliferation, induces differentiation, and apoptosis in a large variety of normal and tumor cells, including cells of the large intestine[1-3]. Most of the long-term pleiotropic actions of 1α-25(OH)2D3 are mediated by binding to a high-affinity vitamin D receptor (VDR)[3-5], which is a member of the nuclear hormone-receptor superfamily. The growth-restraining anticancer effects of vitamin D on colon cells are conveyed through genomic and post-genomic pathways involving a crosstalk with mediator synthesis and signaling, the mediation of a cell-cycle arrest, and finally the induction of apoptosis[6].

1α-25(OH)2D3, the active form of vitamin D, is enzymatically formed from its precursor 25(OH)2D3. The enzyme was thought to exist only in the kidney, until recently it has been identified in other non-renal tissues including the large intestine[7,8]. Further studies demonstrated that in colorectal cancer expression of 1α-25(OH)2D3 and VDR increases in parallel with ongoing proliferation in the early phase of tumorigenesis, whereas in poorly differentiated late-stage carcinomas only low levels of both genes can be detected[9-11]. It is postulated that through this upregulation, colorectal cancer cells become able to increase their potential for an autocrine counter-regulatory response to neoplastic cell growth in the early stages of malignancy. Thus, 1α-25(OH)2D3 theoretically represents a suitable target for the prevention of colorectal carcinogenesis.

Short-chain fatty acids, in particular butyrate, have been shown to inhibit growth in colon cancer cell lines. We have previously shown that butyrate and 1α-25(OH)2D3 act synergistically in inducing differentiation of Caco-2 cells[12,13]. Furthermore, at least some of the anti-proliferative and pro-differentiating effects of butyrate are mediated via an upregulation of VDR with subsequent p21Waf1/Cip1 expression[14]. These data prompted us to investigate a possible effect of butyrate on the expression of 1α-25(OH)2D3 in Caco-2 cells.

MATERIALS AND METHODS
Chemicals and supplies

25(OH)2D3 and 1α-25(OH)2D3 were dissolved in ethanol (final maximal concentration of ethanol in medium was 1 mL/L to yield a 10 mmol/L stock solution, which was stored at -20 °C). Butyric acid was dissolved in PBS (final maximal concentration of PBS in medium was 1 mL/L). Control experiments with either 0.1% ethanol or 0.1% PBS were performed to exclude effects of the solvents on the results of our investigations.

Caco-2 cells were obtained from the German Cancer Research Center (Heidelberg, Germany). The stock was maintained in 175-cm2 flasks in a humidified incubator at 37 °C in an atmosphere of 95% air and 50 mL/L CO2. The medium consisted of DMEM supplemented with 10% FCS, 1% penicillin/streptomycin, 1% sodium pyruvate, and 1% nonessential amino acids. The cells were passaged weekly using Dulbecco’s PBS containing 0.25% trypsin and 1% EDTA. The medium was changed thrice per week. Passages 30-38 were used in all the experiments. Cells were screened routinely for possible contamination with mycoplasma by PCR at monthly intervals using the VenorGem mycoplasma detection kit (Minerva Biolabs, Berlin, Germany). For the experiments, the cells were seeded onto plastic cell culture wells in serum-containing medium and allowed to attach for 24 h. Before the treatment, the cells were synchronized in a medium containing 1% FCS. Cells were treated with 3 mmol/L butyrate, 1 µmol/L 25(OH)D3, or 1 µmol/L 1α-25(OH)2D3 for various time intervals ranging from 0 to 72 h. Additionally, cells were co-incubated with butyrate and either 25(OH)2D3 or 1α-25(OH)2D3 or solvent.

RT-PCR was conducted with the Gene Amp/Perkin Elmer RNA PCR kit according to the manufacturer’s protocol, starting from 2 μg total RNA. Amplification of glyceraldehyde-3-phosphate dehydrogenase (GAPDH) served as control. From the results of preliminary experiments, 20 PCR cycles for GAPDH and 30 cycles for 1α-25(OH)2D3 were selected as optimal amplification conditions to produce a log-linear relationship between the amount of each mRNA and intensity of PCR product. The PCR reaction contained 0.2 mmol/L dNTP and 2.5 U AmpliTaqGold DNA polymerase (Applied Biosystems, NJ, USA) and either 0.1 µmol/L primers for 1α-25(OH)2D3 or 0.2 µmol/L primers for GAPDH. The conditions of the reaction for 1α-25(OH)2D3 were: initial denaturation at 94 °C for 15 s followed by annealing at 59 °C for 30 s, extension at 72 °C for 60 s and a final extension at 72 °C for 7 min after the last cycle. The respective annealing temperature for GAPDH was 45 °C. Primers for amplification were as follows: 1α-25(OH)2D3 sense 5’-CAGAGGCAGCCATGAGGAAC-3’, 1α-25(OH)2D3 antisense 5’-GGGTCCCTTGAAGTGGCATAG-3; GAPDH sense 5’-GCACCGTCAAGGCTGAGAAC-3’, GAPDH antisense 5’-CCACCACCCTGTTGCTGTAG-3’. The expected sizes of 1α-25(OH)2D3 and GAPDH were 440 and 803 base pairs (bp), respectively. Aliquots of the PCR mixtures (10 µL) were analyzed by electrophoresis using a 1% agarose gel containing 0.5 µg/mL ethidium bromide.

For semi-quantitative analysis of amplified PCR products, the fluorescent dye PicoGreen (Molecular Probes, Goettingen, Germany) was used according to the manufacturer’s instructions[15,16]. Two microliters of amplified dsDNA in 100 µL TE buffer was mixed with an equal volume of diluted PicoGreen reagent (5 mL/L in TE buffer). Samples were incubated for 5 min at room temperature and protected from light in a microtiter plate. The fluorescence was measured (λex = 485 nm; λem = 538 nm) in a Spectra Fluor Plus fluorometer from Tecan (Crailsheim, Germany). The standard curve for the quantitative analysis was obtained with λ DNA standard in TE buffer, being linear from 1 to 128 ng/well.

Cells were seeded (106 cells/well/mL) in RPMI medium in a six-well plate. After incubation for 24 h with 5×10-8 mol/L 25(OH)2D3, the supernatant and cells were harvested. 1α-25(OH)2D3 was separated from other vitamin D metabolites by extraction columns (J.T. Baker, Phillipsburg, NJ, USA) and determined with a commercially available enzyme-linked immunosorbent assay (Immundiagnostik, Bensheim, Germany), being specific for 1α-25(OH)2D3 and unable to recognize other vitamin D metabolites.

All data were expressed as mean±SD. One-way ANOVA was used to compare means. P<0.05 was considered statistically significant. 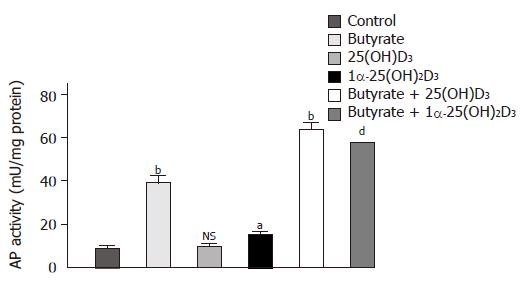 The above mentioned data suggested a possible impact of 1α-25(OH)2D3 mRNA on the synergistic potential of butyrate and vitamin D forms in inducing colonic epithelial cell differentiation. We therefore investigated 1α-25(OH)2D3 mRNA expression in Caco-2 cells treated with butyrate. As shown in Figure 2A, butyrate led to a transient increase of 1α-25(OH)2D3 mRNA by 67.3±27% as compared to control after 24 h, which returned to basal values after 36 h. Induction of gene expression was increased after 24 h and gradually decreased thereafter (Figure 2B).

We finally assessed whether induction of 1α-25(OH)2D3 mRNA and protein was accompanied with an increased enzymatic capacity of Caco-2 cells. Enzymatic conversion into the active metabolite 1α-25(OH)2D3 was enhanced by a factor of 2.3±0.6 after 24 and 48 h of treatment with 3 mmol/L butyrate as compared to control (Figure 3). 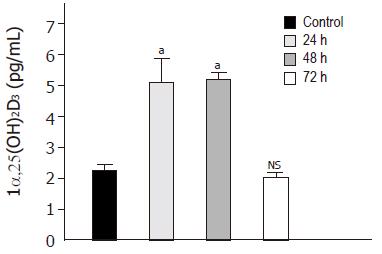 The present report provides further experimental evidence that butyrate-induced colonic epithelial cell differentiation at least in part is mediated by the vitamin D signaling pathway. Our data demonstrate that butyrate treatment of the Caco-2 cell line results in an upregulation of gene and protein expression of 1α-25(OH)2D3, followed by an increased enzymatic activity with conversion of 25(OH)2D3 to 1α-25(OH)2D3. The induction of this enzyme then allowed for the matchable differentiating effects of 25(OH)2D3 in comparison to 1α-25(OH)2D3, thereby presenting a possible new chemopreventive mechanism in colon cancer.

We and others have previously shown that some of the antineoplastic effects of the short-chain fatty acid butyrate in colonic epithelial cells are operated by synergistic actions with 1α-25(OH)2D3. It has been demonstrated in various colonic cancer cell lines that butyrate and 1α-25(OH)2D3 act synergistically in reducing proliferation and enhancing differentiation[13,14,17,18]. One molecular mechanism participating in this interplay represents the upregulation of VDR expression, followed by a stimulation of the negative cell cycle regulator p21Waf1/Cip1 and a downregulation of cyclins and cdks[12]. The alteration of the expression of a variety of genes as well as by inhibiting histone acetylase[19,20] and phosphorylation by enhancing nonhistone protein phosphorylation[21] and causing hypo- or hypermethylation of DNA[22,23] is the other known molecular mechanism by which butyrate mediates its antitumor effects. Similar additive antiproliferative effects of vitamin D with other histone deacetylation inhibitors such as TSA have also been described in a non-malignant epithelial breast cell line[24].

Evidence from a variety of experimental studies, epidemiological findings and a few human clinical trials indicate that vitamin D can modulate and inhibit carcinogenesis[6]. Vitamin D activity in epithelial cells involves the conversion of 25(OH)2D3 to 1α-25(OH)2D3 during the interaction of 1α-25(OH)2D3 with VDR. Subsequently, activation of VDR leads to repression or activation of specific proto-oncogenes or tumor-suppressor genes that are related to proliferation and differentiation in a large variety of normal and tumor tissues including the small and large intestine[1-5,25]. In addition, post-genomic pathways also seem to be involved in growth regulation. VDR seems to undergo specific alterations in expression during the development and progression of colon cancer. Compared to normal colon mucosa, VDR density is increased in hyperplastic polyps and in early stages of tumorigenesis, but declines in late-stage neoplasia[9-11]. As a further support to this stage-dependent expression, Belleli et al[26] found that the number of 1α-25(OH)2D3-binding sites is significantly decreased in the colon of carcinogen-treated rats.

1α-25(OH)2D3 is believed to exist solely in the kidney and it has also been identified in other non-renal tissues including the large intestine[7,8].

Due to its higher affinity to VDR, 1α-25(OH)2D3, the active form of vitamin D, is about 500-1 000-fold more active than its precursor 25(OH)2D3. Though there exists a large body of evidence, that 1α-25(OH)2D3 exerts pleiotropic antitumor effects against several malignancies in vitro, its clinical use as a chemopreventive agent is limited by hypercalcemia. For example, the concentrations of 1α-25(OH)2D3 required to inhibit colon cancer in tissue culture are in the range of 10-6-10-9 mol/L[27-29]. Therefore, several groups have searched for other vitamin D-related anti-neoplastic therapeutic strategies. Recently, Schwartz et al[30] have demonstrated not only the expression of 1α-25(OH)2D3 and VDR in normal and malignant pancreatic tissue but also antiproliferative effects of the prohormone 25(OH)D3[30]. Furthermore, prostatic 1α-25(OH)2D3 has been found to be largely unregulated by serum levels of parathyroid hormone and calcium[31]. Due to the large therapeutic window of 25(OH)2D3 compared to 1α-25(OH)2D3, the authors concluded that 25(OH)2D3 could play a role in the prevention of both pancreatic and prostate cancers. In our experimental setting, 25(OH)2D3 was not able to exert antiproliferative effects in Caco-2 cells as a result of the weak expression of 1α-25(OH)2D3. However, the induction of this enzyme by butyrate provoked the same impact on the differentiation of this colon cancer cell line as 1α-25(OH)2D3. Whether these activities are specific for Caco-2 cells or represent tissue-specific peculiarities of colonic epithelium has to be determined.