AIM: To evaluate the effects of a portocaval shunt on the decrease of excessive portal flow for the prevention of sinusoidal microcirculatory injury in extremely small-for-size liver transplantation in pigs.

Since the first successful living donor liver transplantation (LDLT) in a child[1] patient and an adult[2] patient, LDLT has become the established method to reduce the number of patients on the waiting list and is considered as an alternative to standard liver transplantation[3-7]. The survival rate of adults is significantly lower than that in children[8] and the key to a successful LDLT, especially in adult recipients, is the adequacy of the size of the graft that can be safely harvested from the donor[9-11]. In some cases, graft weight ratio of the recipient native liver weight (GWRLW) of 30% or less has been transplanted successfully, but in general, graft weight per recipient’s body weight (GWBW) less than 0.8% or GWRLW less than 40% has been considered marginal or small-for-size. These small-for-size grafts are associated with an increased incidence of complications and graft failure[9-12]. A small-for-size graft cannot supply the metabolic demand of an adult recipient in the early posttransplant period. Poor early graft function is characterized by protracted cholestasis, coagulopathy and ascites, and these findings are proposed to be the essential symptoms of small-for-size syndrome[13]. However, the precise mechanism for this dysfunction remains unclear.

Previously, we have reported that portal hypertension after reperfusion is one of the most important factors aggravating the microcirculatory injury of the graft[14]. In the present study, we hypothesized that the increment of portal flow played a major role in graft injury and poor function of small-for-size grafts, and investigated the effects of portocaval shunt (PCS) on the excessive portal flow for the prevention of the sinusoidal microcirculatory injury after extremely small-for-size liver transplantation using pigs.

Landrace white pigs, weighing 18-28 kg, were used as donors and recipients. All experiments were conducted according to Principles of Laboratory Animal Care (NIH publication No. 86-23, revised in 1985). Food was withheld for 24 h before the operation. Anesthesia was induced by intramuscular administration of ketamine (5 mg/kg) and atropine sulfate (1.0 mg/body) followed by endotracheal intubation and maintenance with oxygen and isoflurane by positive pressure mechanical ventilation. A catheter was placed in the internal jugular vein for fluid administration and central venous pressure (CVP) monitoring and fixed at the back of the neck for postoperative venous sampling. A carotid arterial line was also placed for intraoperative blood sampling and monitoring mean arterial pressure (MAP). In recipients, an opposite internal jugular vein was used for the venovenous bypass from the portal vein and femoral vein. Eleven transplantations were carried out in each group. 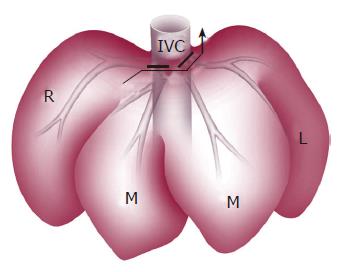 Following intravenous administration of heparin, catheters were cannulated in the lower abdominal aorta and splenic vein. The diaphragm was widely opened and the supradiaphragmatic aorta was divided and encircled. Cold University of Wisconsin (UW) solution (4°C) was flushed in from both the aorta and the splenic vein after aortic clamp. The right lateral lobe was removed and preserved in UW solution.

In the group with shunt, the PCS was made on the back table and placed by means of side-to-side anastomosis between the portal vein and the infra-hepatic inferior vena cava (IVC) (Figure 2). The diameter of the PCS was 6 mm. The graft was weighed after the back table preparation. 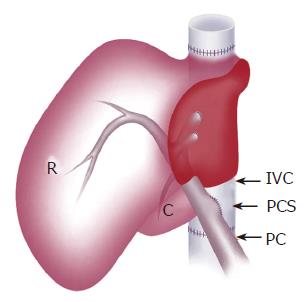 Total hepatectomy was performed under ilioportaljugular venovenous bypass[15]. The reduced-size graft with or without PCS was implanted orthotopically with end to end vascular anastomosis of the suprahepatic IVC, the portal vein, the infra-hepatic IVC, and the hepatic artery. Before anastomosis of the portal vein, rinse solution was perfused into the portal vein of the graft. Hepatic arterial reconstruction was performed under a microscope. A catheter was inserted into the common bile duct for bile drainage.

After transplantation, the pigs were placed in a warmed cage with free access to water and food. FK506 (0.1 mg/kg·d) was injected for immunosuppression from postoperative day (POD) 1-7. When recipients died, autopsy was performed to exclude the possibility of technical complications and to confirm the patency of all anastomoses. Liver grafts were also weighed.

Systemic hemodynamic monitoring of MAP and CVP was carried out continuously during the operation, as well as portal vein pressure was monitored. Portal flow and hepatic arterial flow (HAF) were measured before hepatectomy in donors and after arterial reperfusion in recipients using ultrasound transit time flow probes and a flow meter (Transonic Systems Inc., Ithaca, NY, USA). The diameter of the probe was 8 mm for the portal vein and 3 mm for the artery. Total liver blood flow (TLBF) was calculated as the sum of portal flow and HAF. Liver biopsies were performed before hepatectomy, after reperfusion, and on every other day up to POD 7, and tissue specimens were examined under light microscope and Ki-67 staining was performed for the determination of proliferating hepatocytes. Transmission electron microscopical findings were also investigated in the specimen after reperfusion. Arterial blood samples were obtained hourly for gas analysis during the operation and determining alanine aminotransferase (ALT), aspartate aminotransferase (AST), total bilirubin (T-Bil), and anti-thrombin III (AT-III) before the operation, at 3 and 6 h after reperfusion and on every POD up to POD 7.

The graft weight at the time of transplantation expressed as a percentage of GWRLW and GWBW was calculated.

Values of parameters were expressed as mean±SD. Statistical significance was determined by Student’s t-test. The survival rate was calculated by the Kaplan-Meier method. Values between the two groups were statistically analyzed by generalized Wilcoxon test. P values less than 0.05 were regarded as statistically significant.

Body weight, graft volume, and operation time are shown in Table 1. The graft volume was approximately 25% of the recipient native liver volume, and 0.6% of the recipient body weight in both groups. The cold ischemic time in the group with PCS was slightly longer than that in the group without PCS because of the time required for the PCS at the back table, but there was no statistical difference. There was no significant difference in MAP or CVP between the two groups (data not shown).

In the group without PCS, all pigs except one died of liver dysfunction within 24 h after reperfusion. On the other hand, in the group with PCS, eight pigs survived for more than 4 d and the remaining three died of portal vein thrombosis at the anastomotic site of PCS or perforated gastric ulcer within 3 d. The PCS significantly improved the survival rate of the animals in comparison to the animals without the shunt after transplantation (P<0.05) (Figure 3). 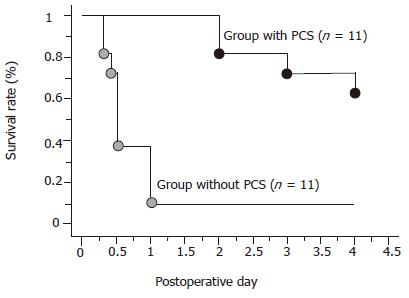 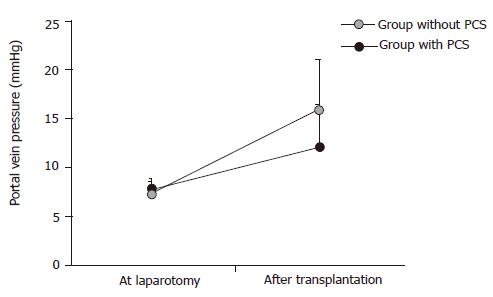 The light microscopical findings of the liver graft after reperfusion are shown in Figure 5. In the group without PCS, enlargement of the sinusoidal lumen and bleeding in the peri-portal triads were observed but these abnormal findings were not recognized in the group with PCS. 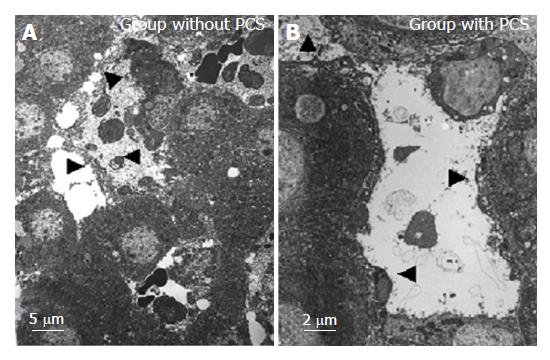 Figure 6 Transmission electron microscopical findings of the sinusoid after reperfusion. Arrowheads indicate the destroyed or preserved or detached sinusoidal endothelial cells into the sinusoidal space with destructed or intact Disse’s spaces.
Liver regeneration in the group with PCS

The graft weight in the recipients who survived for more than 4 d (n = 8) increased to 87.3% of the recipient native liver. Ki-67 labeling index before and after transplantation is shown in Figure 7. The Ki-67 labeling index showed only 1.0% of hepatocytes at laparotomy. However, it increased abruptly after transplantation, reaching a peak value of approximately 60% at POD 2, and decreasing to 30% on POD 4. 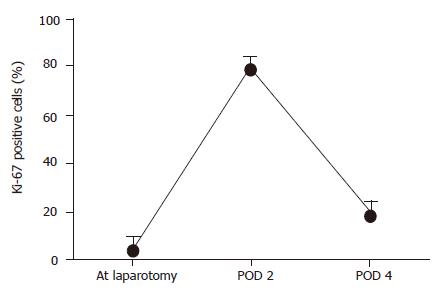 Figure 7 Ki-67 detection in the pigs that survived for more than 4 d in the group with PCS (n = 8).
Liver function

The sinusoids are the principal vessels involved in the transvascular exchange between blood and the parenchymal cells and play an important role in hepatic microcirculation. In an experimental transplantation model using a small-for-size graft weighing less than 30% of the native liver, Asakura et al[14] and Man et al[24] demonstrated that portal hypertension is a determinant factor for the injury of sinusoidal endothelial cells and hepatic parenchyma. The portal flow through the reduced microvascular bed of the small-for-size graft after reperfusion is likely to induce injury of sinusoidal endothelial cells and activation of Kupffer’s cells, which is similar to those after extended hepatectomy in rats reported by Panis et al[19].

With regard to the graft regeneration in the group with PCS, though the TLBF was low, the weight of the graft and Ki-67 index increased remarkably in the pigs that survived for more than 4 d. The decreased HAF subsequent to the excessive portal flow observed after reperfusion in the group without PCS was also believed to contribute to the poor regeneration of residual liver and the poor outcome. Sato et al[25] reported that portal hypertension is a trigger of liver regeneration following partial hepatectomy. But surplus portal hypertension induces liver dysfunction[25]. Results of our study support the hypothesis that portal flow controls liver regeneration in small-for-size liver transplantation and maintains liver function.