METHODS: We examined expression of Ki-67, CEA, p53, and K-ras, in the surgical specimens of pancreas with adenocarcinomas (n = 11) and chronic pancreatitis (n = 12). Cellular proliferation was assessed by Ki-67 proliferation index using the proliferation marker Ki-67. In specimens with pancreas cancer, we divided pancreas epithelium into normal (n = 7), ductal hyperplasia (n = 3), dysplasia (n = 4), and cancerous lesion (n = 11) after hematoxylin and eosin staining, Ki-67, and CEA immunohistochemical staining. In cases with chronic pancreatitis, the specimen was pathologically examined as in cases with pancreas cancer, and they were also determined as normal (n = 10), ductal hyperplasia (n = 4), or dysplasia (n = 5). p53 and K-ras expression were also studied by immunohistochemical staining.

CONCLUSION: Our results favorably support the hypothesis that ductal hyperplasia and dysplasia of the pancreas might be precursor lesions for pancreas cancer. Further evaluation of oncogenes by the molecular study is needed.

The pancreatic cancer has the poorest prognosis among various cancers with a 5-year survival rate of 3%, making it the fourth most common cause of cancer-related mortality rate[1-3]. Although the surgical resection offers the only chance for cure, only 10-30% of patients have resectable tumor[4]. Since early diagnosis followed by complete resection is the only way to the complete recovery, understanding the pathogenesis of pancreatic cancer seems to be of great value.

In an effort to search for the pathogenesis of pancreatic cancer, mutations of K-ras, p53, and overexpression of HER-2/neu were found in human pancreatic ductal adenocarcinoma[9].

Currently, the hypothesis of multistep carcinogenesis that states cumulative genetic mutations in the normal pancreas might have progressed into pancreatic cancer is mostly accepted. However, detailed explanation for each step of carcinogenesis needs further investigation. In the current study, we performed histological examination of pancreas and detected normal epithelium and that with ductal hyperplasia, dysplasia, or cancerous lesions. Then we immunohistochemically determined the expression of Ki-67, K-ras, and p53 to identify if ductal hyperplasia and dysplasia of pancreas might be precancerous lesion.

The degree of pancreatic ductal lesion was classified morphologically according to Cubilla and Fitzgerald[6], and the pancreatic carcinoma according to Kloppel[10]. Most pancreatic duct epitheliums are composed of cuboidal and low columnar cells, their cytoplasm filled with mucous components. They are surrounded by loose fibrous connective tissue. Hyperplasia of pancreatic duct epithelium is divided into either flat or papillary type. However, recent studies show that there is no difference in genetic mutations between these two forms of hyperplasia[9]. Therefore, we considered these two different forms of hyperplasia in the same tissue in this study. Dysplasia was classified according to flattening, papillary hyperplasia of ductal epithelium, increased nucleus/cytoplasm ratio as the epithelium changes into atypical form, loss of nuclear polarity, morphologic form, and aggregation. A little evidence of cellular division was also considered as dysplasia. The degree of hyperplasia was evaluated objectively by counting the numbers of hyperplasia using the method of Ki-67 (Immunotec, France) immunohistochemical staining. To see whether dysplasia develops or not, we performed CEA immunohistochemical staining in the area of hyperplasia stained with Ki-67 using double staining method and classified them into different categories, so that we can minimize the errors arising from differential classification of pancreatic tissue.

After 10% of surgically resected pancreatic tissue was fixed in neutral formalin, paraffin-embedded tissue was sliced to the thickness of 4 µm continuously. One slice was stained with hematoxylin-eosin (H&E), and the others were stuck to the slide with poly-L-lysine for immunohistochemical staining. After all the slices went through autoclave (120 °C, 15 lb) for 15 min to expose the antigens fixed by formalin, we treated with H2O2 for 30 min to eliminate intrinsic peroxidase. For immunohistochemical staining, CEA monoclonal antibody (Ab) (DAKO, Carpenteria, CA, USA) and Ki-67 monoclonal Ab (Immunotech, Marseille, Cedex, France) were diluted to 1:150 and 1:100, respectively, then incubated at room temperature for 3 h. Labeled streptavidin biotin kit (LSAB kit, DAKO) and 3’,3-diaminobenzidine (DAB) were used for staining. Also p53 monoclonal Ab (Novocastra, Newcastle, UK) was diluted to 1:150 and incubated at 4 °C for one day. Then alkaline phosphatase, anti-alkaline phosphatase kit (APAAP kit, DAKO) was used for staining and fast red (DAKO) for expression. For K-ras staining, p21ras monoclonal Ab (Oncogene Research Products, Calbiochem, Germany) was diluted to 1:50. The serially sliced tissues were examined morphologically at the same area using H&E staining for histologic diagnosis, and then were compared with the results of immunohistochemical staining in response to CEA, p53, K-ras, and Ki-67. The following Ki-67 proliferation index was expressed as the percent of Ki-67-positive cells of 1 000 pancreatic duct epithelial cells. The double staining was performed using Ki-67 and CEA monoclonal Ab to ascertain the presence of dysplasia. Dysplasia was classified using CEA+p53 and CEA+Ki-67 staining. 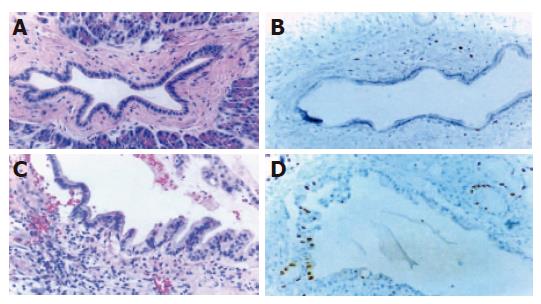 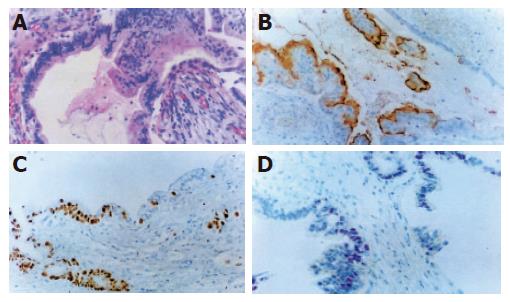 The positive reaction to K-ras protein seen in cytoplasm was observed in 33% of hyperplasia sites and 67% of dysplasia sites, but not in normal tissue in the pancreatic cancer patients. The positive staining to K-ras was in 80% of cancer tissue. The character and intensity in staining was not proportional to the differentiation of cancer. In chronic pancreatitis, K-ras was expressed in 67% of dysplasia, but not in normal sites. Overall, K-ras was expressed in 33% of pancreatic duct hyperplasia, 67% of dysplasia and 80% of cancerous sites, but no expression of K-ras could be detected in any normal sites.

It is generally accepted that three to seven accumulated mutations might be required for a normal cell to transform into a neoplastic cell[11]. A famous example of multistep development of malignancy has been reported in colorectal carcinoma[12], and similar multiple mutational steps seem to be associated in the development of pancreatic cancer[13]. Chronic pancreatitis is accepted as a precancerous lesion of pancreatic cancer, although a detailed mechanism regarding this is yet to be delineated. Several possible mechanisms have been proposed. There has been a study suggesting that ductal hyperplasia might play an important role[6,8]. Unfortunately, this hypothesis is hard to be tested since ductal hyperplasia could not be objectively determined on general means of pathological examination. Moreover, morphologically and functionally different kinds of pancreatic tissue tend to be mixed together which makes statistical analysis difficult. All these problems are partly due to the ambiguous pathologic terms and definitions; for example, the pancreatic duct hyperplasia, dysplasia, atypical ductal hyperplasia, intraductal tumor, carcinoma in situ, adenomatous hyperplasia, and atypical adenomatous hyperplasia[7,14].

In the present study, we only used the term, hyperplasia and dysplasia, since there are similar lesions, morphologically and cytologically, in other parts of the gastrointestinal tract. In order to objectively determine pancreatic duct hyperplasia, we used Ki-67 proliferation index. In evaluation of atypical hyperplasia, we used CEA immunohistochemical study.

The p53 gene is a tumor suppressor gene that involves regulation of the cell cycle and its mutation is most common in human cancers[15]. Mutated p53 in tumor cell accumulates nuclear p53 proteins and this overexpression is used as a marker for immunohistochemical staining[15,18]. It is reported that mutation of p53 has been reported to be detected in at least 50-70% of pancreatic adenocarcinoma[15-17]. In this study, p53 overexpression was most frequently shown in the cancerous lesion, rarely in the dysplastic cells and not at all in hyperplastic and normal cells. Therefore, it seems that the overexpression of p53 is implied to be the last phenomenon in the tumorigenesis. The fact that overexpression of p53 is shown more frequently in cancer tissues, regardless of the cell differentiation, suggests that it would be a useful marker in detecting activated dysplasia from well-differentiated cancer.

P21K-ras protein, synthesized by K-ras gene, accumulates in the cytoplasm[12], and found to be strongly stained in cytoplasm of most of the cancer cells[19]. The pancreas cancer originated from the exocrine gland showed 75-95% incidence of K-ras activation[20-24]. High incidence of K-ras mutation in pancreatic cancer implicates that this mutation might be a basic step of carcinogenesis. However, the earliest pancreatic lesion in which K-ras mutation can be found is not clearly known. As for the reports on the detection of K-ras mutation in the hyperplastic pancreatic duct of chronic pancreatitis patients, there have been some discrepancies. The current study immunohistochemically examined oncogene protein expressions in various pancreatic lesions. Although the presence of mutated gene needs to be confirmed at the molecular level, we found the possible continuity between pancreas diseases through protein expressions of oncogene. K-ras was strongly and frequently expressed in dysplastic and cancerous tissues compared with that of hyperplastic tissue. These results indicate that the overexpression of K-ras is associated with the pancreatic duct dysplasia in the carcinogenesis. Results in chronic pancreatitis were also similar to pancreatic cancer, suggesting that ductal dysplasia may be the precancerous lesion.

In our study, we found the possibility of the existence of stepwise mutation in the progression of advanced cancer from normal pancreatic cell. First, in the pancreatic cancer tissues, we found tissues presumed to be precancerous lesion, histologically different from normal epithelial cells. Second, this premalignant lesion was found more frequently in the tissues of pancreatic cancer compared with that of other disease states. Third, in the dysplastic and cancer tissues, the excessive expression of oncogene product was shown more frequently than in normal tissues. Fourth, K-ras protein overexpression developed in earlier stage of carcinogenesis, while the overexpression of p53 protein mostly occurred in advanced steps such as dysplasia or cancer. Finally, in chronic pancreatitis, some hyperplastic and dysplastic tissues showed the overexpression of oncogenic proteins similar to pancreatic cancer, although at low percentage. Therefore, chronic pancreatitis patients with protein overexpression of oncogene would have higher risk of cancer. Consequently, these results suggest that there is a correlation between the protein overexpression by genetic alteration and histological changes. Although we investigated mutation of only two important genes using low-sensitive immunohistochemical staining method, we believe that this study would be useful in the future researches on the pathogenesis of pancreatic cancer.