AIM: To assess the frequency of herpes simplex virus type I in upper gastrointestinal tract ulcers and normal mucosa with the modern and better assays and also with a larger number of well characterized patients and controls and its relationship to Helicobacter pylori(H pylori).

METHODS: Biopsy specimens from 90 patients (34 with gastric ulcer of the prepyloric area and 56 with duodenal ulcer) were evaluated. Biopsies from 50 patients with endoscopically healthy mucosa were considered as the control group. The method used to identify herpes simplex virus-1 (HSV-1) was polymerase chain reaction. H pylori was detected by the CLO-test and by histological method.

CONCLUSION: HSV-1 is frequent in upper gastro-intestinal tract ulcers but not in normal gastric and duodenal mucosa. There is an inverse association between HSV-1 and H pylori infection.

During the last two decades, a significant progress has been made in the role of Helicobacter pylori(H pylori) in the pathogenesis of peptic ulcers, while the invention of new powerful antisecretory drugs has changed dramatically the treatment of the disease. However, the exact etiopathogenesis of peptic ulcer disease is still under investigation.

The significant role of gastric acidity and inflammation of mucosa due to H pylori cannot be disputed, but a multifactorial etiology for peptic ulcer disease seems to be emerging[1-3].

The idea of a possible correlation between HSV-1 and peptic ulcers has appeared almost 40 years before[4,5], due to many common characteristics observed in the clinical picture and the natural history of both diseases[4-7].

A possible involvement of HSV-1 in peptic ulcer disease was reported from several investigators, but a firm conclusion has not yet been reached. The vast majority of these studies are based on the detection of antibodies against the virus in the serum and the duodenal juice of patients with peptic ulcer[8-12], a finding also common in the apparent healthy population. There are only two studies that report the presence of HSV-1 in tissue samples obtained from gastric and duodenal ulcers, using polymerase chain reaction (PCR) methods, but the number of the examined populations is small[13,14]. On the other hand, in the studies reported above, a possible correlation between HSV-1 and H pylori has been investigated in the pathogenesis of peptic ulcer disease.

DNA of HSV-1 has been detected also in human vagal[15] and celiac ganglia[16], which provide the nerve network to gastric tissue. Theoretically, since vagotomy is used to treat peptic ulcer disease, the same treatment may interrupt the migration of activated HSV-1 from ganglia to gastric mucosa, thus preventing the recurrence of ulcer.

The purpose of this study was to investigate the po-ssible relationship between HSV-1 and peptic ulcer and whether viral infection of ulcer patients is related to the presence of H pylori infection.

MATERIALS AND METHODS
Patients and biopsies

Tissue samples were taken from all 90 patients with peptic ulcer for the detection of HSV-1 in duplicate, from the following areas: the base and the rim of the ulcer; the adjacent area of the ulcer at a distance of 3 cm (minimal and maximal distance from the crater 3 and 5 cm respectively). For this reason, in the duodenal ulcer group a second duodenal biopsy was obtained; an endoscopically normal area of the stomach (the corpus in gastric ulcer cases and the antrum in duodenal ulcer cases).

Two samples were also taken from endoscopically healthy areas of the antrum and corpus of the stomach in all 50 controls.

Two samples from the antrum and two from the corpus of the stomach were taken for the detection of H pylori using the rapid urease test (CLO-test) and routine histology.

Finally, specimens from the gastric ulcers were exa-mined histopathologically to exclude malignancy.

Genomic DNA was extracted using the QIAamp DNA mini kit, following the protocol supplied for purification from fresh tissues. DNA was finally dissolved in 50–100 μL of TE buffer depending on the size of DNA pellets and stored at -20 °C until amplification.

The PCR products were analyzed by 2% agarose gel electrophoresis in 0.5×Tris–borate EDTA buffer along with ethidium bromide. A molecular weight marker (Φ×174/Hae III, Sigma) was also run simultaneously to identify the molecular size of the PCR products. The DNA bands were visualized by UV transillumination and analyzed using a gel-documentation system. None of the PU and the control samples were negative in the b-actin test ultimately leaving 90 PU and 50 controls that were subjected to HSV-1 PCR analysis.

All associations between parameters of interest were examined either by Fisher’s exact test or Pearson’s chi square test with continuity correction.

The genome of HSV-1 was present in 28 of the 90 patients with peptic ulcer (31.1%), contrary to the control group in which no positive detections were found (0%, P<0.0005, Figures 1-3). There was an equal prevalence in the two subgroups of patients, 17 of 56 patients with duodenal ulcer (30.4%) and 11 of 34 with gastric ulcer (32.4%) were tested positive (P = 0.843). In all HSV-1 positive cases, the viral genome was detected from the tissue samples obtained from the crater of the ulcer as from the samples obtained from the rim, while all samples from adjacent and distant areas were negative. 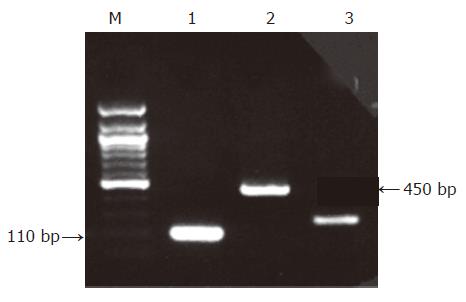 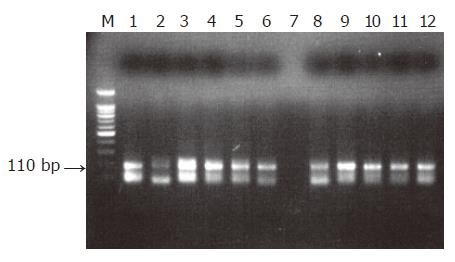 All the H pylori positive subjects by CLO test from both groups were also positive for the bacteria with histology.

Statistical analysis of other parameters

We also studied some of the common risk factors for the development of peptic ulcer disease. No statistically significant difference was found between patients and controls regarding family history of upper gastrointestinal ulcer, history of Herpes labialis, alcohol consumption, and use of NSAIDs (Table 4).

As expected, tobacco smoking was the only statistically significant risk factor for the development of peptic ulcers between patients and control population (P = 0.019). Smokers were associated with a 2.57-fold increase risk of peptic ulcer development.

The performed multivariate analysis also confirmed that H pylori and tobacco smoking (OR: 3.320 and 2.619 respectively) were more likely to induce peptic ulcer (Table 5).

Despite the progress during the last 20 years in the understanding of the pathogenesis of peptic ulcer disease, it is clear that gastroduodenal ulcer is the result of a multifactorial process.

The possible involvement of HSV-1 in the process is a field of interest for several investigators, but a firm conclusion has not been reached. The presence of viral DNA in tissue samples obtained from the ulcer site is 9.5-18%[13,14]. The possible explanation for this finding is that the HSV-1 expression is prompted either by the ulcer injury or by immune cells[14,16] or HSV-1 itself might cause the ulcerative lesion by directly infecting the mucosal cells[13] or finally that HSV-1 expression is induced by the ulcer treatment[26-28].

In the present study, in a substantially larger number of patients than in the studies reported above (90 vs 22 and 21 respectively), the positivity for HSV-1 DNA was expressed using PCR in a greater percentage of samples (31% vs 9.5% and 18% respectively).

This finding can be explained as follows. The HSV-1 may have initially entered the vagus ganglia through the oral pharynx or other peripheral connecting sites. Upon activation, the virus would travel down the vagal nerve to the potential site of peptic ulcer lesion. HSV-1 itself might cause ulcerative lesion in selected cases of a subset of peptic ulcer diseases by directly infecting the mucosal cells in the stomach and duodenum following virus release from neuroendocrine cells or vagal nerve terminals or both. Alternatively, peptic ulcer might activate latent HSV-1 in vagal ganglia, making replication of HSV-1, a contributing but not an initiating factor of ulcer[13].

On the other hand, investigating a possible association between H pylori and HSV-1 in pathogenesis of a subset of gastroduodenal ulcers, our data suggest that the PCR HSV-1 positivity is associated with a 5.4-fold increase in negative H pylori detection. Moreover, the patients with ulcer lesions infected with HSV-1 presented a similar prevalence of H pylori infection as the control group, which was significantly lower than that in the HSV-1 negative ulcer cases (P = 0.09). This finding requires further investigation.

According to our results, in the subgroup of patients with duodenal ulcers, the risk of H pylori infection was independent from HSV-1 DNA expression (P = 0.634). On the other hand, in the subgroup of patients with gastric ulcer disease, the possibility of H pylori negativity was 18.5-fold higher (P = 0.002). These data are in accordance with those reported by Lohr et al[13].

Additionally, according to our results, there was not any correlation between peptic ulcer disease and age, sex, ulcer site, family history of gastroduodenal ulcers, history of H. labialis, alcohol consumption and NSAIDs use. On the contrary, statistically significant difference (P = 0.019) was observed between patients with peptic ulcers and controls, as far as smoking was concerned.

Our results indicate an involvement of HSV-1 in the pathogenesis of peptic ulcer disease. Although an opportunistic infection with the virus in the ulcer site cannot be excluded, the inverse relationship between HSV-1 detection and H pylori infection indicates a possible implication of this virus in the formation of the ulcer crater, at least in a subgroup of patients. Furthermore, experimental data support this[13,15,16,30,31]. The exact localization of the virus in ulcer tissue cells should be precisely determined in order to clarify whether the lesion is caused by HSV-1 or the virus opportunistically is established, especially in immunocompromised patients[32].