AIM: To elucidate the molecular mechanisms of the inhibitory effects of IFN-α on tumor growth and metastasis in MHCC97 xenografts.

RESULTS: A total of 190 differentially expressed genes including 151 IFN-α-repressed and 39 -stimulated genes or expressed sequence tags from 8 464 known human genes were found to be regulated by IFN-α in MHCC97. With a few exceptions, mRNA levels of the selected genes in RT-PCR and Northern blot were in good agreement with those in cDNA microarray.

Human hepatocellular carcinoma (HCC) is one of the most prevalent malignancies in China. Patients with HCC often die of tumor metastasis and recurrence even after curative resection. Recently, a metastatic human HCC model in nude mice (LCI-D20) and a series of HCC cell lines (MHCC97, MHCC97-H, MHCC97-L) with different metastatic potentials derived from LCI-D20 have been established in our institute[1,2]. Using this model, IFN-α significantly inhibits tumor growth and metastasis of MHCC97 xenografts has been found[3-5]. However, the underlying molecular mechanisms are still unclear.

IFN-α is a multifunctional cytokine capable of inter-fering with viral infection, inhibiting cell proliferation, regulating cell differentiation, as well as modulating immune response[6-9]. It is well known that these pleiotropic effects of IFN-α are mediated primarily through the tran-scriptional regulation of many different functional genes. Thanks to the rapid progress in human genetic projects; many functional human genes and expressed sequence tags (ESTs) are identified and released, which make us possible to use cDNA microarray to survey IFN-α-modulated genes in MHCC97 cells. In this study, we identified 190 differentially expressed genes from 8 464 known human genes, which might mediate various biological functions of IFN-α. These data provide us useful clues for further studying the anti-tumor mechanisms of IFN-α and finding the IFN-α mimics for HCC therapy.

A total of 8 464 cDNAs of known human genes (United Gene Holding, Ltd, Shanghai) were amplified by polymerase chain reaction (PCR) using universal primers and spotted onto silylated slides (CEL Associates, Houston, TX, USA) using a Cartesian PixSys 7500 motion control robot (Cartesian Tech, Irvine, CA, USA) fitted with ChipMaker micro-spotting technology (TeleChem, Sunnyvale, CA, USA). After being hydrated, dried, cross linked and washed, the microarray was ready for use. Total RNA was isolated from IFN-α-treated and untreated (3 000 IU/mL, 16 h) cells using TRIzol (Gibco-BRL). cDNA probes were prepared by reverse transcription and purified according to the methods described by Schena et al[10]. Then equal amount of cDNA from IFN-α-untreated and treated MHCC97 cells was labeled with Cy3-dUTP and Cy5-dUTP, respectively. The mixed Cy3/Cy5 probes were purified and dissolved in 20 μL of hybridization solution (0.75 mol/L NaCl, 0.075 mol/L sodium citrate, 0.4% SDS, 50% formamide, 0.1% Ficoll, 0.1% polyvinylpyrrolidone and 0.1% BSA). Microarrays were pre-hybridized with 0.5 mg/mL salmon sperm DNA at 42 °C for 6 h. After being extensively washed, the denatured (95 °C, 5 min) fluorescent-labeled probe mixture was applied onto the pre-hybridized chips and further hybridized at 42 °C for 15-17 h under a cover glass. Subsequently, chips were sequentially washed for 10 min at 60 °C with 2×SSC+0.2% SDS, 0.1×SSC+0.2% SDS and 0.1×SSC solutions and dried at room temperature (1×SSC: 150 mmol/L NaCl, 15 mmol/L sodium citrate). Both Cy3 and Cy5 fluorescent signals of hybridized chips were scanned by ScanArray 4000 (GSI Lumonics, MA, USA) and analyzed using Genepix Pro 3.0 software (BioDiscovery Inc., CA, USA). To minimize artifacts arising from low expression, only genes whose Cy3 and Cy5 fluorescent intensities were both over 200 counts, or genes whose Cy3 or Cy5 fluorescent intensity was over 800 were selected for calculating the normalization cofactor (ln(Cy5/Cy3)). Genes were identified as differentially expressed, if the ratio of Cy5/(Cy3×normalization cofactor) (Cy5/Cy3*) was more than 2 or less than 0.5.

It is well known that the gene expression pattern of cells often varies with time and differentiation status and that cells derived from different individuals often have different genetic expression profiles. As a result, it is often difficult to extract useful information on the possible causes of phenotypic differences by comparing the genetic expression profiles of different cell lines. To minimize such complicated factors, we compared the gene expression profiles in 3 000 IU/mL IFN-α-treated and untreated (0 IU/mL) MHCC97 cells in two independent cDNA microarray analyses. We reasoned that such an internally consistent comparison might provide useful information on explaining the anti-tumor molecular mechanism of IFN-α in MHCC97 xenografts. 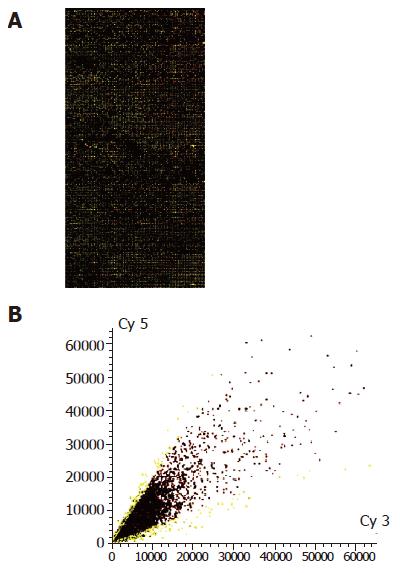 To validate the results of cDNA microarray, we selected nine genes whose expressions were clearly altered by IFN-α and evaluated their expressions by PCR and Northern blot. We enrolled IFN-α-regulated genes and found that the results were consistent with the previous reports[11,12]. 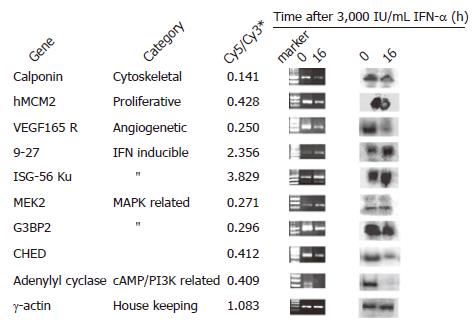 cDNA microarray is a useful technique for rapid screening of gene expressions in cells, although the results need to be further confirmed by other molecular methods. Using this method, we found 211 hybrid dots, whose Cy5/Cy3* ratio was either more than 2 or less than 0.5 in IFN-α-treated MHCC97. Blasting the cDNA sequences in public database showed that these dots represented 190 different human genes or ESTs due to the redundant hybrids. Based on the results of RT-PCR and Northern blot, we believe that our cDNA microarray data are reliable. These differentially expressed genes might mediate the multiple biological functions of IFN-α directly or indirectly in MHCC97. We have artificially categorized these genes into nine functional clusters (Table 2).

Several genes functionally related to cell morphogenesis, adhesion, and cytoskeleton remodeling are also modulated by IFN-α in MHCC97. For example, decreasing the expression of calponin, actin-related protein 2 (Arp2), fibulin 1D, beta-tublin and epidermal surface antigen (ESA), etc., might damage mitotic spindle formation and might interfere with actin-based cell motility, migration, adhesion and morphogenesis[21-24]. Reducing the expression of prolyl 4-hydroxylase beta, a key enzyme in collagen biosynthesis and type IV collagenase, a tumor-derived extracellular matrix metalloproteases might block tumor invasion and metastasis. Although most genes in this category were first identified as IFN-α regulating genes, their roles in mediating IFN-α functions need to be further studied.

In this study, we found that many genes functionally related to signal transmitting were affected by IFN-α in MHCC97. By repressing the expressions of discoidin domain receptor, integrin-linked kinase, EPH-related tyrosine kinase (EPT2) and MEK2, etc., IFN-α might block cellular signaling initiated by tyrosine-kinase receptors[25,26]. By modulating the expressions of Rab GDI, Ras-related GTP-binding proteins and farnesyl-protein transferase and nuclear transport factor (NTF2) and G3BP2, a Ras-GAP/RNA binding protein, IFN-α might interfere with GTP/GDP exchange and nuclear import, thus influencing the recycles and activities of ras and its homologs[27-29]. By attenuating the expressions of adenylyl cyclase (AC) and phosphatidylinositol 4,5-bisphosphate 5-phosphatase (PtdIns (4,5)P(2)5- phospharase), a catalyzer of pho-sphatidylinositol 4,5-bisphosphate and PRK1, IFN-α might decrease inositol polyphosphate levels in cytosol and might inhibit the serine/threonine-kinase activities through cAMP/ PI3P signal pathway[30,31]. All these changes might exert inhibitory effects of IFN-α on MAPK and PI3K signaling. In addition, other signaling pathways such as Ca(2+), NO and TGFβ/hMAD-dependent signaling pathways are suppressed by IFN-α as well[32,33]. Plausibly Jak/STATs pathway, the most important IFN-α signaling pathway, is confirmed not to be regulated in IFN-α-treated MHCC97. The deficient expression of p48 (ISGF3γ) in this cell line may be the possible mechanism for the non-response of IFN-α priming via Jak/STATs pathway (data not shown).

In this study, we found that many angiogenic-related genes were regulated by IFN-α. By attenuating the expressions of Golli-MBP[34], VEGF 165 receptor and aryl hydrocarbon receptor nuclear translocator (ARNT)[35] as well as Golgi membrane sialoglycoprotein MG 160, a bFGF binding protein and cysteine-rich FGF receptor (CFR-1)[36], IFN-α may destroy the balance between pro- and anti-angiogenic factors and exert its inhibitory effects on tumor angiogenesis.

It is well known that cells usually respond to various stimuli by rapidly shifting the functions of transcriptional factors. Using this strategy, IFN-α might impose its anti-proliferative functions and hormone response by fluctuating the expression of several transcriptional factors or their cofactors such as retinoblastoma binding protein2 (RBP2), interleukin enhancer binding factor 2, lost on transformation 1 (LOT1) and KRAB-zinc finger protein (SZF1)[37-40].

Except for functionally definite genes, many ESTs with unknown functions were identified as IFN-α-regulated genes in our study (Table 2). In conclusion, cDNA microarray is a useful, rapid method for screening transcriptome of cells and potentially paves a way for elucidating IFN-α effects on tumor growth and metastasis.