METHODS: Fifty SD rats were divided into control group (n=20) and model group (n=30). Alcoholic liver fibrosis rat model was induced by intragastric infusion of a mixture containing alcohol, corn oil and pyrazole (1 000:250:3). Fifteen rats in each group were killed at wk 16. The diameter and pressure of portal vein were measured. Plasma hyaluronic acid (HA), type IV collagen (CoIV) and laminin (LN) were determined by radioimmunoassay. Liver tissue was fixed in formalin (10%) and 6-μm thick sections were routinely stained with Mallory and Sirius Red. Liver tissue was treated with rabbit polyclonal antibody against LN and ColIV. Hepatic non-parenchymal cells were isolated, total protein was extracted and separated by SDS-PAGE. MMP-2 and TIMP-1 protein expression was estimated by Western blotting.

In China, the number of patients with alcoholic liver fibrosis is increasing. It has been reported that about 20% of people with 10-20 years of alcohol drinking might develop alcoholic liver fibrosis[1]. Portal hypertension is a major complication of liver fibrosis and cirrhosis, which can lead to variceal bleeding, fluid retention and reduced renal blood flow, etc. being a major cause of death in patients with liver fibrosis. The pathological mechanisms of portal hypertension remain unclear. Recently, it has been found that pathological changes of hepatic microvasculature play a major role in the formation of portal hypertension[2]. Wang et al[3]. pointed out that alcohol might cause microvasculature obstruction and capillarization of hepatic sinusoids. Capillarization of the sinusoids is an early event in liver fibrogenesis, which is gradually formed by deposition of type IV collagen and LN in the perisinusoidal space and finally forms a complete and thick basement membrane[4]. When liver fibrosis occurs, it affects normal material exchange between blood and hepatocytes while the blood flow resistance and portal hypertension ensue. Studies on the relation between alcoholic liver injury and portal hypertension are rarely available and the pathological mechanisms are still controversial. One of the popular hypotheses is that hepatic non-parenchymal cells might synthesize basement membrane proteins and take part in the formation of extra-cellular matrix (ECM)[5].

In order to understand the pathological mechanisms of alcohol-induced portal hypertension, we explored the possible changing rule by which ECM of perisinusoid basement membrane (types І, III and IV collagen and LN) abides. Moreover, the synthesis of MMP-2 and TIMP-1 protein in freshly isolated hepatic non-parenchymal cells and their correlation with portal hypertension were also investigated. Hopefully, this may provide new insights for the prevention of alcoholic liver fibrosis.

Fifty rats were divided into control group (n = 20) and model group (n = 30). Alcoholic liver fibrosis model was induced by intra-gastric infusion of a mixture containing alcohol, corn oil and pyrazole (1 000:250:3) as previously described[6,7]. The control rats received intra-gastric infusion of saline solution and had normal diet. Fifteen animals in each group were killed at wk 16.

Rats were anesthetized with sodium pentobarbital (40 mg/kg, ip) and the abdomen was opened to expose the portal vein. Portal vein diameter and pressure were measured. The numerical value was recorded as previously described8].

Radioimmunoassay of HA, ColIV and LN

Liver tissue was fixed in buffered formalin (10%) and embedded in paraffin. Sections (6-μm thick) were routinely stained with Mallory and Sirius Red, then observed under ordinary optical and polarization microscope.

Liver tissue sections were treated with 1% hydrogen peroxide, 0.1% proteinase K and 1% Triton X-100. The sections were reacted with 1:150 diluted rabbit polyclonal antibody against LN and ColIV overnight at 4 ˚C, then with PV-6001 kits for 2 h at room temperature (SP method).

Hepatic non-parenchymal cells were treated with RIPA (50 mmol/L TrisHCl, 150mmol/L NaCl, 0.025% NaN3, 0.1% SDS, 100 μg/mL PMSF, 1 mmol/L NaF, 1% NP-40, 2 mmol/L Na3VO4, 50mmol/L Hepes, 1% Triton X-100) to extract total protein. Total protein was detected with the BCA protein assay method. Total protein(12μg) was loaded into each lane. Cell extracts were separated by SDS-PAGE using a 12% gel and transferred onto a PVDF membrane. The membranes were blocked for 1 h at room temperature in 10 g/L BSA and incubated overnight at 4˚C with surviving antibody(MMP-2 and TIMP-1), then with sheep anti-rabbit second antibody conjugated to horseradish peroxidase for 2 h. Finally the membranes were developed with DAB and incubated until color developed sufficiently. An equal amount of proteins was loaded onto the stocking gel, β-actin expression was simultaneously estimated in each sample as the internal marker by Western blotting using anti-actin monoclonal antibody.

Immunohistochemical staining results were analyzed by “5-point sampling” method using the Motic patho-image analysis system on 7 sections for each group. Under the same magnification (10×20), we collected 35 samples from each group, then measured the average facio-density (average facio-density = whole area of positive reaction grains/whole area of visual field). Western blotting results were analyzed by the Motic gel analysis system. We compared the gray scale value of target protein and internal marker to gain the relative optical density value.

SPSS version 10.0 was used. Data were analyzed using test and one-way ANOVA. All values were expressed as mean±SE. P<0.05 or <0.01 was considered statistically significant. 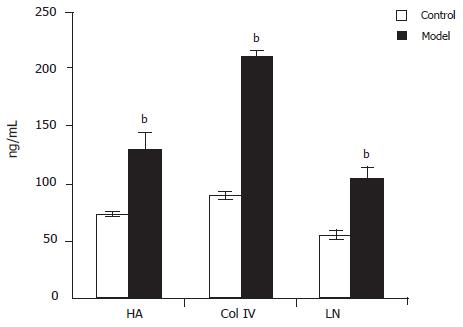 Figure 1 Levels of plasma HA, ColIV and LN in model and control groups bP<0. 01 vs control.
Results of Mallory and Sirius Red staining 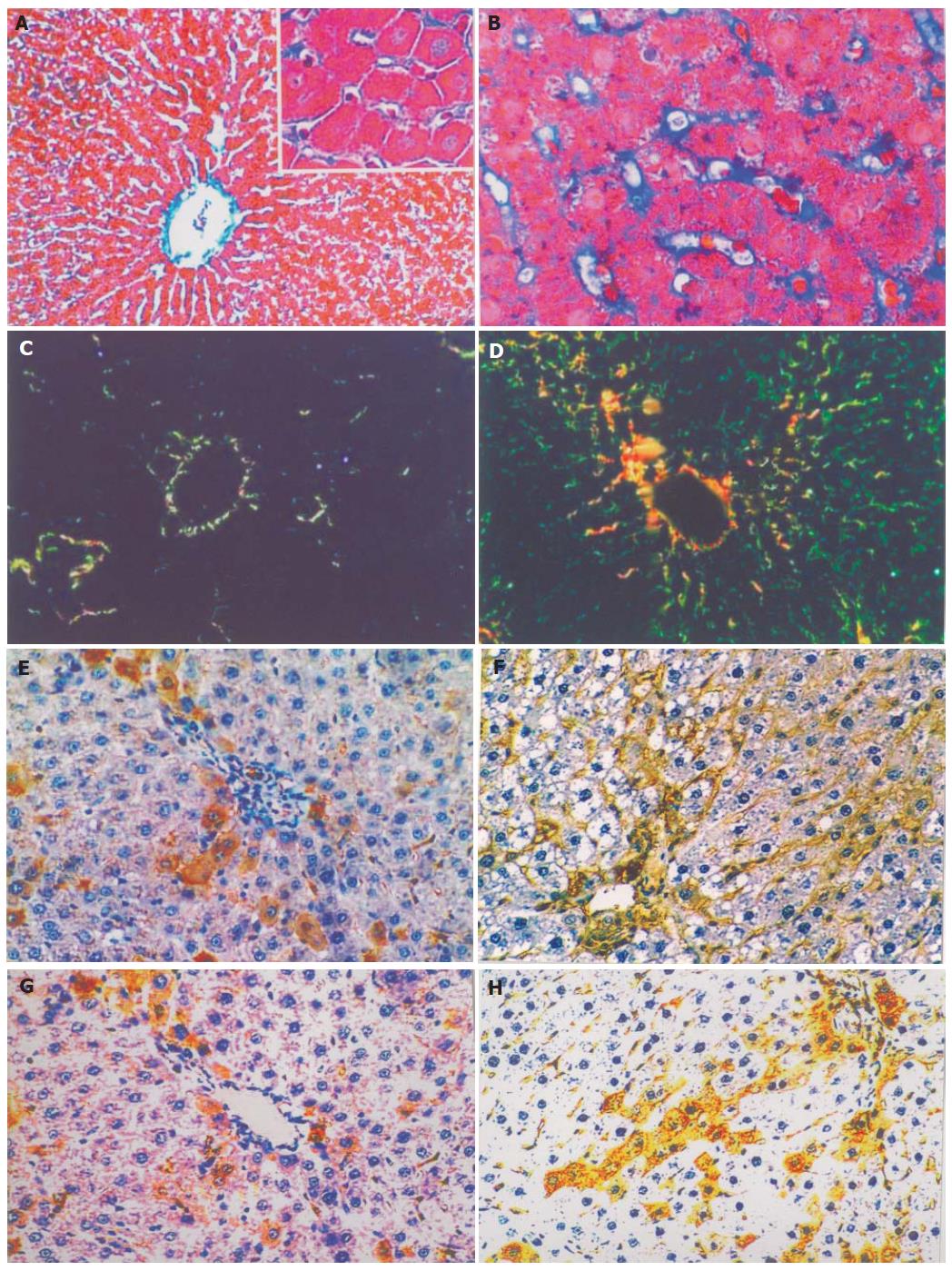 The immune reaction for ColIV in normal liver was detected only at the level of portal tract and around the major central vein of lobules (Figure 2E). In alcoholic liver fibrosis tissue, positive ColIV was detected at the level of portal tract and in the central vein of lobules or in the Disse space between the sinusoid cells and hepatocytes (Figure 2F). Image analysis showed that the average facio-density of positive granules in ColIV of alcoholic liver fibrosis tissue was upregulated remarkably compared to the normal liver tissue (0.130±0.007 vs 0.032±0.004, P<0.01, Figure 3). 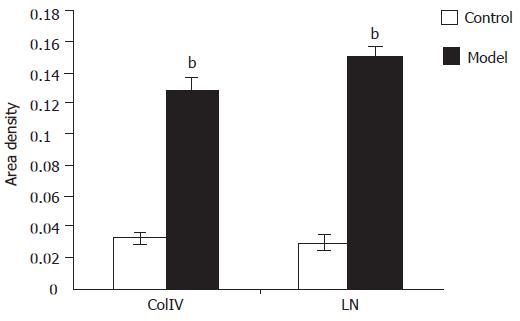 Figure 3 Density of ColIV and LN in positive granule area bP<0. 01 vs control in model and co.

In normal liver tissue, a few LN positive cells were detected (Figure 2G). However, the LN positivity increased significantly in alcoholic liver fibrosis tissue. The LN positive granules deposited not only in the cytoplasm but also in the perisinusoidal area (Figure 2H). Image analysis showed that the average facio-density of positive granules in LN was upregulated remarkably compared to the normal liver tissue (0.1518±0.0058 vs 0.0299±0.0058, P<0.01, Figure 3). 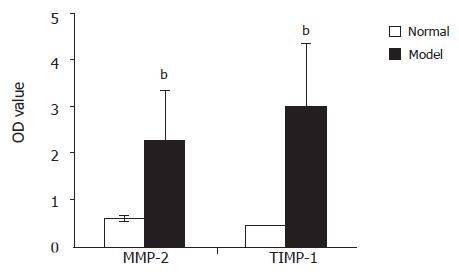 Some studies demonstrated that kupffer cells, hepatic stellate cells (HSC) and sinusoidal endothelial cells (SEC) play a key role in the synthesis or decomposition of extra cellular matrix (ECM)[10,11]. Others believe that the levels of serum hyaluronate are strongly related to SEC injury and hepatic microcirculation disorders[12]. Serum hyaluronate is a better index of morphological and functional changes in SECs. Our results showed that the level of rat serum hyaluronate increased remarkably in the early stage of alcoholic liver fibrosis, indicating that SECs are severely injured. When SECs get injured, a large number of inflammatory leucocytes move to the injured sinusoids and trigger the self-recovery process. Therefore, the ECM of basement membrane increases and enwraps the injured sinusoids in order to defend against inflammatory leucocytes. After repeated injury, over-recovery emerges and the ECM of basement membrane including type I, III, IV collagen and LN is over-deposited in perisinusoid[13,14]. Deposition of type I, III, IV collagen and LN reduces hepatic sinusoidal penetration and causes sinusoidal capillarization[15].

Hepatic sinusoids are special capillaries that are limited by fenestrated endothelial cells without a genuine basement membrane and surrounded by perisinusoidal cells storing vitamin A and Kupffer cells as well as pit cells, resident macrophages and large granular lymphocytes[16]. Hepatic sinusoidal capillarization includes a series of pathological changes, in which SECs lose fenestrae, basement membrane develops and sinusoidal outlets collapse[17]. All these pathological changes disable the normal sinusoid intrinsic functions[18]. Capillarization of the sinusoid may cause a disturbance in the exchange of many bioactive substances between the sinusoidal blood and hepatocytes across the Disse space, contributing to the pathogenesis of alcoholic liver fibrosis. On the other hand, with the occurrence of sinusoidal capillarization, the sinusoidal space is significantly narrowed and the sinusoidal endothelial fenestrations are decreased in size and number or disappear in the end. All these pathological changes increase resistance of the hepatic vascular bed and pressure of hepatic portal vein.

Additionally, the breakdown of ECM is essential for tissue remodeling. The matrix metalloproteinases (MMPs), also called matrixins, are thought to play a central role in these processes[19]. The activities of MMPs are precisely controlled during the activation from their precursors and inhibited by tissue inhibitors of metalloproteinases (TIMPs)[20]. MMP-2 is secreted from Kupffer cells and HSCs as they become activated. Also, the activation of MMP-2 is in turn inhibited by TIMP-1. Generally, TIMP-1 and MMP-2 affect biological functions by non-covalent bond [20]. At the early stage of alcoholic liver fibrosis, with the activation of Kupffer cells and HSCs, the level of MMP-2 expression increases. MMP-2 can decompose type I, III, IV collagen and assist Kupffer cells, HSCs and SECs to activate and transfer. Emmanouil et al[21]. showed that increased MMP-2 could decompose the basal membrane of neighboring SECs. The signal of injured SECs triggers the mechanisms of TIMP synthesis to balance the levels of MMPs. However, while repeated injury occurs, the synthesis of ECM becomes stronger than decomposition[22,23]. We examined the expression of MMP-2 and TIMP-1 protein in freshly isolated hepatic non-parenchymal cells of normal and fibrotic rats by Western blotting. The results showed that the levels of MMP-2 and TIMP-1 protein expression were upregulated in the early stage of alcoholic liver fibrosis, the level of TIMP-1 was significantly higher than that of MMP-2, suggesting that the synthesis of basal membrane collagen is stronger than decomposition and more and more ECMs of the basement membrane are synthesized due to the inhibition deposit around SECs and hepatocytes of MMPS[24]. This in turn induces perisinusoidal fibrosis and causes aggravating portal hypertension[25,26]. The therapy of alcohol-induced liver disease varies according to the severity of histological liver damage and clinically overt portal hypertension and hepatic dysfunction[27,28]. Only a few studies have been conducted on alcohol-induced portal hypertension in the past decades[29,30]. Our experimental results showed that hepatic portal hypertension occurred earlier than alcohol-induced cirrhosis, suggesting that hepatic portal hypertension plays a potential role in cirrhosis.

In conclusion, hepatic sinusoidal capillarization and perisinusoidal fibrosis are the vital causes for alcohol-induced portal hypertension in rats. A thorough evaluation of hepatic microcirculation and anti-capillarization may provide the basis for new therapeutic avenues.