A man who developed profound septic shock was treated for Escherichia coli sepsis of unknown origin. Following stabilisation, a diagnosis of pylephlebitis (infection and thrombosis in the portal vein) was made at computed tomography. A review of the condition, its primary causes, typical features, investigation and management was presented.

The combination of infection and thrombosis within the portal vein comprises pylephlebitis. The term is generally regarded as synonymous with portal pyaemia, although the literature is not cross-referenced. It is a secondary phenomenon, subsequent to sepsis affecting parts of the gastrointestinal tract drained by the portal vein, or in structures adjacent to it (e.g., the biliary tree). Portal vein sepsis was seen more commonly in the pre-antibiotic era, and although now rare it still carries a high mortality. We present a case of pylephlebitis in a 71-years-old man who survived.

A 71 years old man was admitted with a four-week history of nausea, vomiting, rigors and mild right iliac fossa pain. His background history included sigmoid colectomy for diverticular abscess nine years ago, and tissue aortic valve replacement with single-vessel coronary artery bypass graft two years prior to admission. He appeared unwell, had a temperature of 39 °C, a blood pressure of 94/60 mmph and a pulse of 100 beats/min. There was an ejection systolic murmur, but there were no stigmata of bacterial endocarditis. The right iliac fossa was tender. Full blood count showed normal haemoglobin, leucocytosis (13.4×109/L) and mild thrombocytopaenia (platelets 113×1012/L). Blood chemistry showed mild renal impairment (urea 16.1 mmol/L, creatinine 160 mmol/L) and mild derangement in liver function (bilirubin 46 mmol/L, alkaline phosphatase 177 IU/L). Abdominal ultrasound scan showed a normal biliary tree with no focal liver abnormality and no evidence of appendicular abscess. After blood was taken for culture, he was commenced on cefuroxime 1.5 g tds.

The patient remained stable but pyrexial, and a CT scan of the abdomen was performed. This revealed air in the intrahepatic biliary system (Figure 1), ‘consistent with a prior sphincterotomy’ (radiologist’s report). Further questioning revealed no history of such a procedure. Meanwhile, Escherichia coli, sensitive to cefuroxime, was grown from blood cultures. Intravenous antibiotics were stopped after 7 d. Two days later he deteriorated and went into sudden and profound septic shock. He was transferred to intensive care for inotropic support. Liver function tests deteriorated (alkaline phosphatase 326 IU/L, aspartate aminotransferase 108 IU/L, but bilirubin normal). 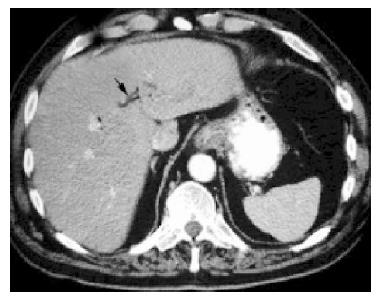 Figure 1 Air within the intrahepatic bile ducts [arrow] during the first CT scan.

Repeat CT scan of the abdomen on day 14 revealed portal vein thrombosis. There was no longer air in the biliary tree. In addition, there were a number of infarcts in the spleen (Figure 2). Transesophageal echocardiography showed no vegetations. Magnetic resonance cholangiography demonstrated a dilated common bile duct, and this was confirmed at endoscopic retrograde cholangiography, but no stone was identified. 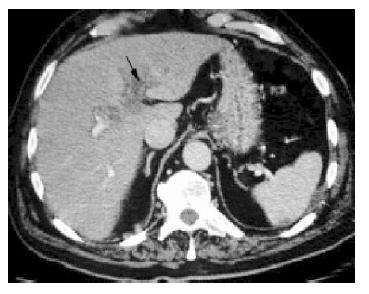 Intravenous antibiotics were rapidly recommenced on ITU, with the addition of gentamicin and metronidazole. He was anticoagulated with low molecular weight heparin and warfarin. His temperature settled, and his liver function normalized. He was discharged after 6 wk in hospital with oral ciprofloxacin. He remained well three months after discharge.

Diverticulitis, inflammatory bowel disease (both colitis and ileitis), appendicitis, intestinal obstruction, infected pancreatic necrosis, gastric ulceration and sepsis affecting the biliary tree are all well recognised causes of pylephlebitis. Flexible sigmoidoscopy has been documented as an antecedent[1]. Thrombophilic disorders are often diagnosed following presentation with the condition[2]. In a review of reported cases termed pylephlebitis since 1976, within the antibiotic era, diverticulitis accounted for 68% of cases. No underlying cause was found in 32% of cases. Survival was 32%[3].

The diagnosis is made radiologically. Gas in the portal vein, more commonly seen in cases of fulminant abdominal sepsis or trauma, has been reported in pylephlebitis (a patient with Crohn’s ileitis and abscess[4]). ‘Hepatic-portal venous gas’ may be seen on plain x-ray as branching radiolucency in the liver extending to within 2 cm of the capsule[5]. Intra hepatic thrombosis or gas is more usually seen at CT scanning. Gut associated organisms such as Escherichia coli or Klebsiella pneumoniae, or anaerobic Bacteroides species are usually cultured from the blood, polymicrobial cultures are characteristic. Management comprises appropriate antibiotic prescribing and resection or drainage of any primary septic source. Prolonged antibiotic courses are required to treat infection within the thrombus. Anticoagulation is usually done; however, its benefits have not been proven in terms of survival[2]. Complications include venous infarction of the bowel (the main rationale for anticoagulation), hepatic abscess formation and portal hypertension.

In this case the presence of intestinal sepsis was not confirmed, although it is quite possible given his previous resection that he had further significant diverticular disease. Gas in the biliary tree would seem to indicate either a disrupted sphincter of Oddi, or the presence of gas forming organisms; however, no evidence of choledocholithiasis was found, and no pus was seen at endoscopic examination. He may have had cholangitis and passed a stone prior to the first CT scan. The underlying cause in this case remains unconfirmed.

In conclusion, pylephlebitis is a rare condition associated with multiple clinical conditions and a high mortality rate. It should be considered if sepsis due to gut-associated organisms recrudesces in the absence of an overt abdominal source.