AIM: To investigate the effect of Helicobacter pylori (H pylori) infection on Bax protein expression, and explore the role of H pylori in gastric carcinogenesis.

METHODS: H pylori was assessed by rapid urease test and Warthin-Starry method, and expression of Bax protein was examined immunohistochemically in 72 patients with pre-malignant lesions.

Helicobacter pylori (H pylori) is a Gram-negative bacterium that infects the human stomach and plays an important role in the pathogenesis of chronic gastritis and peptic ulcer diseases. In addition, epidemiological and clinical studies have consistently identified an association between infection with H pylori and subsequent development of gastric cancer[1]. Chronic and persistent infection with H pylori is considered to be one of the earliest steps in gastric carcinogenesis. H pylori has recently been classified as a group I carcinogen by an International Agency for Research on Cancer Working Group. In the Correa model of human gastric carcinogenesis, H pylori has been found to be involved in the evolution of the gastric tissue from normal to superficial gastritis, multifocal atrophic gastritis, intestinal metaplasia, and gastric dysplasia, and finally to adenocarcinoma[2-5]. However, the mechanisms underlying the carcinogenic potential of H pylori have not been completely understood as yet.

Our previous studies indicated that cell proliferation and apoptosis were essential events in the cellular turnover of gastric tissue. H pylori infection was associated with increased apoptosis. Abnormal regulation of apoptosis may play an important role in the pathogenesis of gastric carcinoma. Bax gene is an important apoptosis-regulatory gene. To the author’s knowledge, the relationship between H pylori infection and Bax protein expression is still unclear. Hence, we conducted this study to investigate the effect of H pylori infection on Bax protein expression, and explore the role of H pylori in gastric carcinogenesis.

Seventy-two gastric antral biopsy specimens were taken from 51 patients with intestinal metaplasia and 21 patients with dysplasia referred for upper gastrointestinal endoscopy in South-west Hospital from 1994 to 1996. Informed written consent was obtained from each patient for the upper gastrointestinal endoscopy and biopsy procedures. The patients who had undergone previous gastric surgery or were known to be taking nonsteroidal anti-inflammatory drugs, corticosteroids or prostaglandin analogs, which may damage the gastric epithelium or impair the normal gastric cytoprotective response to injury, were excluded from this study. Moreover, the patients who had taken antibiotics or other anti-H pylori medications, such as a bismuth compound or a proton-pump inhibitor within the previous one month, were also excluded. This study was approved by the Research Ethics Committee of South-west Hospital. H pylori infection was assessed by rapid urease test and immunohistochemical method (Warthin-Starry stain). H pylori infection was defined when both rapid urease test and immunohistochemical staining were positive. The patients with H pylori infection were treated for 14 d with a triple therapy consisting of colloidal bismuth subcitrate, amoxycillin and metronidazole. One month after the end of triple therapy, the patients underwent the same investigations performed at entry. Eradication of infection by the triple therapy was considered successful when both the rapid urease test and immunohistochemical staining were negative.

All biopsy specimens were independently and blindly examined by two expert pathologists who were unaware of clinical, endoscopic, serological, and functional data of the patients. When discordance was found, the samples were re-examined by the two pathologists together using a double-headed microscope, and the grading obtained on this occasion was used for the analysis.

For each case, 4-mm-thick serial sections were cut from paraffin-fixed specimens, mounted on acid-cleaned glass slides, and heated at 55-60 °C for 60 min. Slides were dewaxed and rehydrated, then the endogenous peroxidase activity was inhibited by incubation with 30 mL/L H2O2 in methanol for 5 min at room temperature. To reduce non-specific background staining, slides were incubated with 50 mL/L normal goat serum for 10 min at room temperature. To enhance immunostaining, sections were treated with an antigen-retrieval solution (10 mmol/L citric acid monohydrate, pH 6.0, adjusted with 2 mol/L NaOH) and heated thrice in a microwave oven at high power for 5 min. Slides were incubated with primary rabbit antihuman Bax polyclonal antibody (1:50 dilution, Santa Cruz, USA) for 30 min at 37 °C. A biotin–streptavidin detection system was employed with diaminobenzidine as the chromogen. Slides were washed twice with PBS and incubated with the linking reagent (biotinylated anti-immunoglobulin) for 10 min at 37 °C. After rinsing in PBS, the slides were incubated with the peroxidase-conjugated streptavidin label for 10 min at 37 °C, followed by incubation with diaminobenzidine and H2O2 for 10 min in darkness. The sections were then weakly counterstained with hematoxylin. With each batch of test samples, a positive control consisting of a tissue section from tonsil was evaluated. In addition, negative controls were prepared for each sample using an irrelevant antibody of the same isotype as the primary antibody.

The degree of Bax protein immunopositivity was evaluated semiquantitatively. Four hundred tumor cells were counted in random fields from representative areas of the lesions, and the immunoreactive cells were roughly assessed and expressed as percentages. The scoring system tested was: <10% (negative, -); 10-25% (low positivity, +); 26-50% (moderate positivity, ++); >50% (high positivity, +++).

Data were analyzed with the STATA package for Windows. The categorical variables were analyzed using c2 test or Fisher’s exact test. Correlation between H pylori infection and Bax protein expression was assessed using the logistic regression.P < 0.05 was considered statistically significant.

H pylori infection was identified by rapid urease test and an immunohistochemical staining. H pylori infection was detected in 68.62% (35/51) patients with intestinal metaplasia and 57.14% (12/21) patients with gastric dysplasia. There was no significant difference in H pylori-infection rate between intestinal metaplasia and gastric dysplasia. 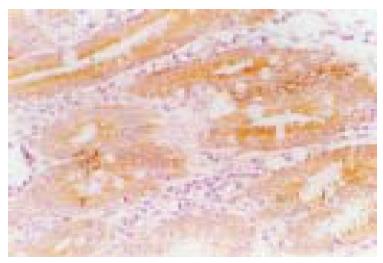 Genetic control of apoptosis and cell survival play a crucial role in tumor growth. Among the molecules related to the apoptotic process, Bcl-2 family proteins are important and critical regulators in a variety of physiological and pathological contexts. Bcl-2 and Bax are members of the Bcl-2 family. Bcl-2 prevents cells from death through a variety of mechanisms, whereas overexpression of Bax protein increases the susceptibility of cells to apoptosis. Although Bax and Bcl-2 have different functions, they share similar structures. Bax is a homolog protein of Bcl-2 and possesses two conserved regions, BH1 and BH2 that appear to be important for Bax/Bcl-2 binding. Bax and Bcl-2 may form homodimers (Bax/Bax, or Bcl- 2/Bcl-2) or heterodimers (Bax/Bcl- 2). The ratio of Bcl-2 to Bax proteins appeared to control the relative sensitivity or resistance of many types of cells to apoptotic stimuli[9,10]. The Bcl-2 protein has been shown to prevent apoptosis and may play an important role in the regulation of gastric cancer growth. In this study, we have examined the relationship between H pylori infection and Bax protein expression in the precursor lesions of gastric cancer. Bax protein was differently expressed in intestinal metaplasia and gastric dysplasia. The positivity of Bax protein expression in H pylori-positive gastric precancerous lesions was significantly higher compared to the H pylori-negative gastric precancerous lesions. H pylori infection was well correlated with expression of Bax protein in gastric precancerous lesions. After eradication of H pylori, the positivity of Bax protein expression significantly decreased in H pylori-positive gastric precancerous lesions. However, in the persisting H pylori infected patients, the positivity of Bax protein expression was not changed. Thus, our results demonstrated that H pylori infection might increase Bax protein expression in intestinal metaplasia and gastric dysplasia, suggesting one of the mechanisms of H pylori-induced gastric epithelial cell apoptosis. However, the mechanism for the stimulation of Bax protein accumulation is still unknown and is not resolved by this study. Several studies have suggested that H pylori produces various toxins, and gastric mucosa can increase some cytokines, nitrous oxide synthase and oxygen radicals released after H pylori infection. At the same time, H pylori infection can lower the gastric antioxidant ability. All those factors damage DNA or enhance the susceptibility of DNA damage and gene mutation[11-12].

In conclusion, H pylori infection seems to be responsible for genomic instability in a subset of cases of H pylori-positive chronic atrophic gastritis and precancerous lesions like metaplasia and dysplasia. Our study suggests that patients with precancerous lesions should receive treatment for eradication of H pylori, which may correct the abnormal expression of Bax protein, reduce gastric epithelial-cell proliferation and apoptosis, thereby decreasing the subsequent risk of gastric carcinogenesis. Additional epidemiological studies need to elucidate whether prevention of gastric cancer is possible with the eradication of H pylori.