AIM: Oligomeric proanthocyanidins (OPC), natural polyphenolic compounds found in plants, are known to have antioxidant and anti-cancer effects. We investigated whether the anti-cancer effects of the OPC are induced by apoptosis on human colorectal cancer cell line, SNU-C4.

Oligomeric proanthocyanidins are some of the most abundant polyphenolic substances in the plant kingdom. Proanthocyanidins are an integral part of the human diet, found in high concentration in fruits, vegetables and seeds as well as in most types of tea and red wine[1]. Numerous studies have reported that flavonoids have potent antioxidant effects through scavenging of superoxide and hydroxyl radicals[2] and anti-proliferative actions via inhibition of metabolic pathways and inhibition of intra-cellular signal transduction[3]. In addition, a variety of proanthocyanidins have been shown to be anti-bacterial, anti-viral[4], anti-carcinogenic[3-6], anti-inflammatory[7,8], anti-allergic[9-11] and consequently reduce the concentration of reactive oxygen species[12] and low density lipoprotein oxidation[13], and cardioprotective effects in human beings[14].

Despite their beneficial effects, the great extent of polyphenolics are not absorbed and metabolized easily due to their chemical structures and the glycosylation, acylation, conjugation, polymerization and the solubility of the compound. Monomeric flavonoids are absorbed in the small intestine. However, polymeric polyphenolics may be degraded by intestinal and colonic microflora, and then excreted in the feces, and the monomers appear to be absorbed in a dose-dependent manner[15].

Apoptosis, a programmed cell death, also plays an essential role as a protective mechanism against cancer cells[16]. Induction of apoptosis is a highly desirable mode as a therapeutic strategy for cancer control. In fact, many chemopreventive agents act through the induction of apoptosis as a mechanism to suppress carcinogenesis[17]. Recently, cancer chemotherapy has gradually improved with the development and discovery of novel anti-tumor drugs, but sometimes these drugs have been limited in clinical application by drug resistance of tumor and by serious damage to the normal tissues and cells.

Oligomeric proanthocyanidins incubated with several human cancer cell lines (breast, lung, gastric, and skin) revealed a selective cytotoxicity for the cancerous cells. However OPC has not been tested for colorectal cancer which is one of the major cause of cancer-related mortality in the West.

In this study, we examined the inhibitory effects of OPC on cancer cell proliferation, and pharmacological mechanism for anti-tumor effects on human colorectal cancer cell line SNU-C4.

Cell viability was determined using the MTT assay kit according to a previously described protocol[18]. In order to detect the cytotoxicity of OPC, SNU-C4 cells were treated with OPC at the concentrations of 10, 50, 100, and 500 µg/mL for 24 h. The control group was treated with the same amount of vehicle. After the MTT, labeling reagent (5 mg/mL) was added to each group and incubated for 4 h at 37°C, they were incubated for 12 h with the solubilization solution in which the formazan crystals formed by MTT will be dissolved. The absorbance was measured with a microtiter plate reader (Bio-Tek, Winooski, VT, USA) at a test wavelength of 595 nm with a reference wavelength of 690 nm. The optical density (A) was calculated as the difference between the reference wavelength and the test wavelength. Percent viability was calculated as (A of drug-treated sample/A of none-treated control) ×100.

The nucleic condensation of apoptosis was determined by DAPI staining. SNU-C4 cells treated with OPC (100 µg/mL) for 24 h were cultured on four-chamber slides (Nalge Nunc International, Rochester, NY, USA). The cells were fixed in 40 g/L paraformaldehyde for 30 min, and were incubated for 30 min in the dark, including 1 µg/mL DAPI solution. They were observed through a fluorescence microscope (Zeiss, Oberköchen, Germany).

For detection of apoptotic cells, TUNEL assay was performed by ApoTag® peroxidase in situ cell death detection kit (Roche, Basal, Switzerland). After 24 h exposure to OPC (100 µg/mL), cultured SNU-C4 cells were fixed in acetic acid at -20°C for 5 min. Incubated with digoxigenin-conjugated dUTP in a terminal deoxynucleotidyl transferase-catalyzed reaction for 1 h at 37°C in a humidified atmosphere. The fixed cells were immersed in stop/wash buffer for 10 min at room temperature, and the cells were again incubated with an anti-digoxigenin antibody conjugating peroxidase for 30 min. The nuclei fragments were stained using 3,3’-diaminobenzidine (DAB) as a substrate for the peroxidase.

Because caspase-3 is a key step in the regulation of apoptosis, caspase-3 activity was measured using a commercially availabe kit. Cells were incubated with OPC (100 µg/mL) for 24 h, and were washed with phosphate-buffered saline (PBS) and lysed. Then the lysates were incubated overnight with caspase-3 substrate (Ac-DVED-pNA) at 37°C, and absorbance at 405 nm was measured using a 96-well microtiter plate reader. As a positive control, recombinant caspase-3 protein was incubated with a substrate. As an inhibitor of caspase-3, Ac-DVED-CHO was used.

Results were expressed as mean±SE. All experiments were done in triplicate. The data were analyzed by one-way ANOVA followed by Dunnett’s post-hoc analysis using SPSS. Differences were considered significant at P < 0.05. 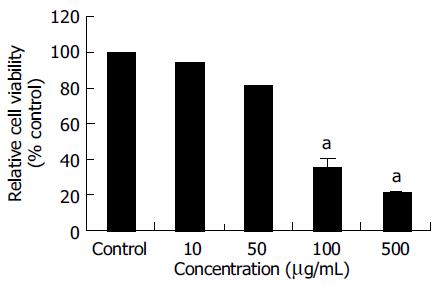 Figure 1 Cytotoxic effects of OPC. SNU-C4 cells were treated with various concentrations of OPC for 24 h prior to the determination of cellular viability. Results are presented as mean ± SE. aP < 0.05 vs control group.
Morphological changes in OPC-induced cytotoxicity

The morphological changes, DAPI staining, and TUNEL reaction were studied to investigate whether cell death was a result of apoptosis in SNU-C4 cells. Cells treated with OPC (100 µg/mL) for 24 h revealed shrinkage of cells through phase-contrast microscope (Figure 2B). To characterize the cell death induced by OPC, nuclear morphology of dying cells were examined with a fluorescent DNA-binding agent, DAPI. Cells treated with OPC displayed typical morphological features of apoptotic cells, with condensed and fragmented nuclei (Figure 2D). The induction of apoptosis by OPC was examined by in situ apoptosis detection. TUNEL assay, based on labeling of DNA strand breaks generated during apoptosis, confirmed that OPC induces apoptosis in SNU-C4 cells (Figure 2F). 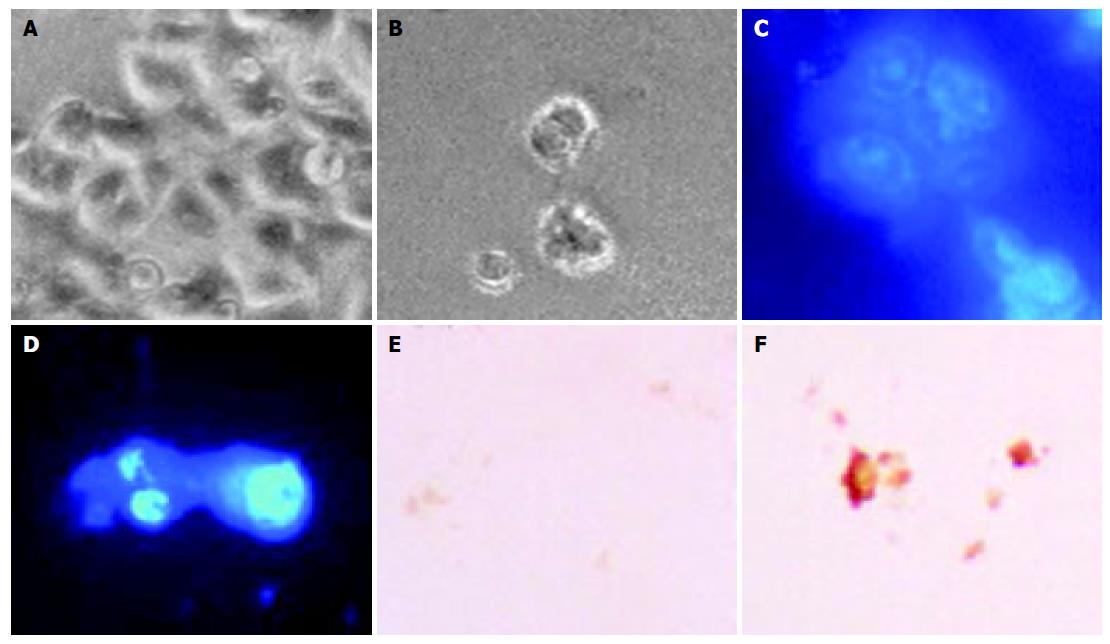 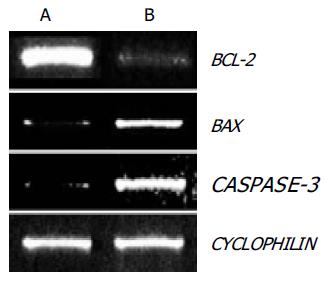 Figure 3 Results of RT-PCR analysis of BCL-2, BAX, and CASPASE-3. As internal control, CYCLOPHILIN mRNA was also reverse-transcribed and amplified. (A) Control, (B)100 µg/mL OPC treated group.
Involvement of caspase-3 in OPC-induced cytotoxicity

Since caspase-3 plays the critical role in apoptosis, the CASPASE-3 gene expression and caspase-3 enzyme activity were determined through RT-PCR and caspase-3 activity assay. The expression of CASPASE-3 was markedly increased after OPC treatment (Figure 3). The caspase-3 activity was measured using specific substrate (Ac-DEVD-pNA). Caspase-3 protein was used as the positive control, and a caspase inhibitor, Ac-DEVD-CHO was the negative control. As illustrated in Figure 4, caspase-3 specific activity was increased by OPC treatment. 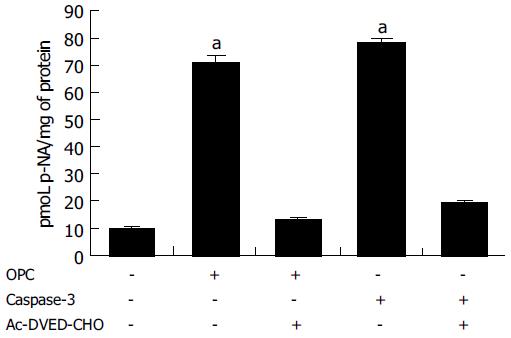 Figure 4 Result of caspase-3 enzyme activity assay. The rate of Ac-DEVD-pNA cleavage was measured at 405 nm. OPC was used as concentration of 100 µg/mL. Caspase-3 was a positive control and Ac-DEVD-CHO was a caspase inhibitor. aP < 0.05 vs control group.
DISCUSSION

Colorectal cancer is the most common of visceral malignancies with the third most common cause of cancer-related mortality in the West[19]. Despite improvements in the management of the colon cancer patient, there is little change in survival rates over the past 50 years[20]. Tumor cells differ from normal cells in their non-responsiveness to normal growth-controlling mechanisms. Current chemotherapeutic drugs try to change the biological properties of cancer cells that continuously divide and grow[21].

In the present study, we investigated the effect of OPC-induced apoptosis on human colorectal cancer cell line SNU-C4 to define the pharmacological basis for anticancer effects and its mechanism of OPC. OPC, extracted from grape seed showed potent anti-oxidant effects in numerous studies[22-25]. Additionally, proanthocyanidins exhibit anti-carcinogenic[3-6], anti-inflammatory[7,8], anti-allergic[9,10], cardioprotective activities[14], as well as being inhibitors of the phospholipase A2, cyclooxygenase and lipooxygenase3[26].

The results of present study demonstrated that OPC induce cytotoxic effect measured by the cell viability on SNU-C4 cells in a dose-dependent manner (Figure 1). SNU-C4 cells also showed apoptotic morphological change of nuclear shrinkage, chromatin condensation, irregularity in shape and retraction by the OPC treatment (Figure 2). In this study, we observed the apoptotic morphology of cellular bodies and the chromatin condensation by DAPI staining (Figure 2). It is known that DNA strand breaks occur during the process of apoptosis, and the nicks in DNA molecules can be detected by the apoptotic status of cells through TUNEL assay[27]. In the present study, typical TUNEL distinction of apoptosis was observed in OPC-treated cells (Figure 2).

At the execution phase of apoptosis, a series of morphological and biochemical changes appear to have resulted from the action of caspases[30]. Caspase-3, in particular, is believed to be most commonly involved in the execution of apoptosis in various cell types[31], because it cleaves most of caspase-related substrates, including key proteins such as the nuclear enzyme PARP[32]. In our data, it is shown that the CASPASE-3 gene expression was increased (Figure 3) and the activity of caspase-3 was increased after OPC treatment (Figure 4). Based on the results, OPC appears to activate intracellular death-related pathways, leading to caspase-3 activation in SNU-C4 cells. Ye et al[5] revealed cytotoxicity of proanthocyanidins from grape seed compared between the human cancer cells with two normal cells, proanthocyanidins demonstrated selective cytotoxicity toward several cancer cells at the concentration of 25, 50 mg/L, while it enhances the growth and viability of the normal cells at the same concentration. Moreover, Joshi et al[33] demonstrated that grape seed proanthocyanidin, ameliorates the toxic effects associated with chemotherapeutic agents such as, 30 nmol/L idarubicin and 1 μg/mL 4-hydroxyperoxycyclophosphamide (4-HC) on normal human hepatocyte, Chang liver cells. These findings suggest that the treatment with OPC show low toxicity on normal cells, and it might have a novel anti-tumor effect on human colorectal cancer cells.

In conclusion, inhibitory effect of OPC on the proliferation of human colorectal cancer cells, SNU-C4 is mainly through apoptosis induced by CASPASE-3 related to BCL-2 families.

The authors are grateful to Doosan Biotech Institute (Yong-in, Korea).