AIM: To investigate the immunogenicity of a novel DNA vaccine, pSW3891/HBc, based on HBV core gene in Balb/c mice.

RESULTS: HBcAg was expressed effectively in 293T cell line transiently transfected with pSW3891/HBc. Strong IgG anti-HBc responses were elicited in mice immunized with pSW3891/HBc. The end-point titers of anti-HBc reached the highest 1:97 200, 4 wk after the third immunization. The specific CTL killing with the highest specific lysis reached 73.25% at effector:target ratio of 20:1 in mice that received pSW3891/HBc DNA vaccine.

Chronic infection with HBV affects more than 250 million people worldwide, and is considered to be a high risk factor for developing cirrhosis and hepatocellular carcinoma. Although some antiviral drugs for HBV can effectively inhibit viral replication, they rarely eliminate the intra-nuclear viral covalently close circular DNA, which is responsible for the persistence of infection. Recent data indicate that immunotherapeutic strategies stimulating both cellular and humoral immune responses to HBV antigens are essential to cure chronic HBV infection. Since genetic immunization, i.e. in vivo transfection of somatic cells with antigen-encoding DNA, effectively induces major histocompatibility complex (MHC) class I-restricted cell-mediated immunity in CD8+ cytotoxic T lymphocytes (CTLs) and elicits humoral immune reactions which are dependent on MHC class II-restricted activation of T helper (Th) cells. In this regard, DNA-based vaccination appears to be a particularly pertinent approach for chronic hepatitis B therapy. It has been demonstrated that plasmid DNA encoding HBV surface antigen (HBsAg) and core antigen (HBcAg) elicits vigorous humoral and cellular response in many species[1-5]. However, the vectors used for animal testing cannot be applied in human studies. On the basis of our previous work, we designed a novel plasmid vector pSW3891. In this study, we investigated the immunogenicity of plasmid pSW3891/HBc encoding HBcAg with this new vector pSW3891 in Balb/c mice.

MATERIALS AND METHODS
Plasmid construction and in vitro expression of HBc

The expression of HBc antigen from DNA vaccine plasmid was confirmed in 293T cells transiently transfected with pSW3891/HBc. The 293T cells were grown in Dulbecco’s modified Eagle’s medium (Invitrogen, Gaithersburg, MD, USA) supplemented with 10% heat-inactivated fetal bovine serum, 0.1 g/L of streptomycin, and 100 IU/mL penicillin. Each of the 60-mm tissue culture dishes (2.5106 cells) was transfected with 10 μg of pSW3891/HBc DNA vaccine plasmid or the empty pSW3891 vector by calcium phosphate precipitation. The levels of HBcAg in the supernatant and the lysate of the 293T cell culture harvested after 48-72 h were detected by Western blot analysis.

Seven-week-old female Balb/c mice were purchased from Millbrook Farm (Amherst, MA, USA) and housed in the animal facility at the Department of Animal Medicine of the University of Massachusetts Medical School in accordance with Institutional Animal Care and Use Committee (IACUC) approved protocol. Ten mice were randomly assigned into two groups. Both groups of mice received DNA immunizations by a Bio-Rad Helios gene gun (Bio-Rad, Hercules, CA, USA). The experimental group was vaccinated thrice at 4-wk intervals with pSW3891/HBc, while the control group received only the empty vector pSW3891. The DNA vaccine plasmids were coated onto the 1.0-micron gold beads at a ratio of 2 μg of DNA per mg of gold. Each gene gun shot delivered 1 μg of DNA, and a total of six non-overlapping shots were delivered to each mouse on shaved abdominal skin at each immunization. Blood samples before immunization and 4 wk after the last immunization were collected from orbital sinus. The sera were isolated and stored at -70 °C until use.

The HBc antigens in supernatant from transiently transfected 293T cells were subjected to SDS-PAGE and blotted onto polyvinylidene difluoride membrane (PVDF; Bio-Rad). Blocking was done with 0.1% I-Block (Tropix, Bedford, MA, USA). The membranes were incubated with immunized mouse sera at 1:500 dilution for 45 min and subsequently reacted with AP-conjugated goat anti-rabbit IgG at 1:5 000 dilution for 10 min. Membranes were washed with blocking buffer after each step. Western-light substrate was then applied to the membranes for 5 min. Once the membranes were dried, X-ray films were exposed to the membrane and developed by a Kodak processor.

HBcAg-specific CTL responses were detected by the CytoTox 96 non-radioactive cytotoxicity assay (Promega, Madison, WI, USA) according to the manufacturer’s instructions. Briefly, single cell suspensions were prepared from spleens of mice, 4 wk after the last immunization. For specific re-stimulation, 3×106/mL splenocytes were cultured in vitro with recombinant human IL-2 (25 U/mL) and 0.01 g/L of the HBc-specific polypeptide SYVNTNMGL (Life Technologies, Gaithersburg, MD, USA). After 7 d of re-stimulation, the splenocytes were used as effector cells in the CTL assays. The effector cells and target cells (P815) at the effector:target ratio of 20:1, 10:1, 5:1, or 2.5:1, respectively were co-cultured with 0.01 g/L specific polypeptide. After 4-h incubation at 37 °C with 50 mL/L CO2, the absorbance of culture supernatant from each well was quantitatively measured using a standard 96-well plate reader according to the instructions. The percent cytotoxicity for each effector:target cell ratio was calculated using the following formula: %cytotoxicity = (experimental-effector spontaneous-target spontaneous)/(target maximum-target spontaneous)100. The results represented the mean of the triplicate data set.

Mouse sera were tested for HBc-specific IgG antibody responses by ELISA. Microtiter plates (Corning, NY, USA) were first coated overnight with 0.005 g/L of purified HBcAg (Aldevron, Fargo, ND, USA) in 0.05 mol/L sodium carbonate buffer at pH 9.2. After coating buffer was removed, 200 μL/well blocking buffer (5% Marvel skim milk in 0.1% PBS-Triton X100) was added for 1 h at room temperature. Blocking buffer was then removed and primary antibody (100 μL/well) was added at different dilutions in blocking buffer and plates were incubated at room temperature. Plates were washed thrice in 0.1% PBS-Triton X100 and diluted anti-mouse biotinylated antibodies (Caltag, Burlingame, CA, USA) were added, followed by 1-h incubation. Plates were washed thrice in 0.1% PBS-Triton X100, then streptavidin-horseradish peroxidase (Caltag) was added, and plates were incubated for 1 h. The horseradish peroxidase activity was detected with ortho-phenylenediamine substrate solution. The reaction was stopped by the addition of 50 μL/well of 3 mol/L H2SO4 after 35 min in the dark. The optical density (A) was read at 450 nm in an ELISA reader (BioRad). The end titration titer was determined when the A reading at the last sera dilution was twofold above the A reading of the negative control wells with the normal mouse sera. 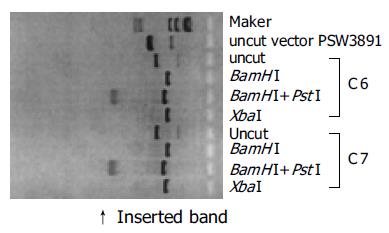 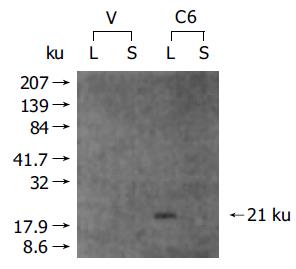 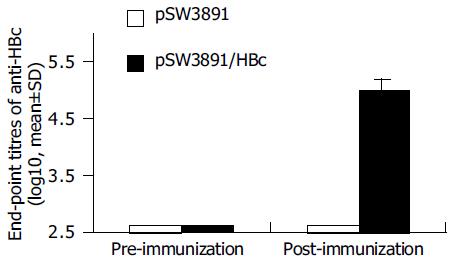 Four weeks following the last immunization, splenocytes from mice immunized with pSW3891/HBc or vector pSW3891 were isolated and stimulated in vitro with the HBc-specific peptide. Specific cell-mediated cytotoxic activities with different effector/target ratios are shown in Figure 4. 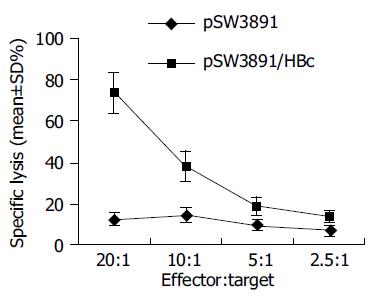 Compared to the control group, the specific CTL killing with the highest specific lysis reached 73.25% at effector:target ratio of 20:1 in the experimental group of mice that received pSW3891/HBc DNA vaccine.

It is well known that immune responses play a significant role in both virus clearance and pathogenesis of hepatitis B. The vigorous polyclonal and multi-specific immune responses to HBV have been associated with recovery from acute infection. It has been shown that specific cellular immunity against HBcAg is a key factor for the control of HBV infection[7]. CTLs and Th cells with specificity for HBcAg are detectable in the circulation during acute infection[8-10]. In contrast, defective CTL- and Th-cell responses have been observed in chronic HBV carriers[11].

There is evidence that DNA plasmid encoding HBcAg is a promising vaccine candidate against HBV infection. Our previous data have also shown that plasmid pJW4303/HBc encoding HBc elicits high titer antibodies and CTL responses in mice and monkeys[6]. However, the plasmids used in these experiments are not suitable for humans because of their vector components. For example, the ampicillin resistant gene for selection may cause antibiotic resistance in clinic, and the sequence derived from SV40 virus promoter region might potentially cause or promote lymphomas and other cancers. We deleted SV40 virus sequence and substituted ampicillin resistant gene in the vector pSW4303 with kanamycin resistant gene to generate a new vector pSW3891. Then the HBc gene was inserted into this new vector to develop a novel DNA vaccine pSW3891/HBc suitable for humans.

Restriction enzyme analysis of pSW3891/HBc confirmed that the HBc gene was inserted correctly into vector pSW3891. The HBc gene could release from pSW3891/HBc with BamHI and PstI, which was not observed in the control vector pSW3891. The expression of pSW3891/HBc in vitro was confirmed in transiently transfected 293T cells. Western blotting analysis showed that HBcAg was detectable in the cell lysate but not in supernatant of the transfected 293T cells in accordance with the early reports[6]. This is consistent with the observation that HBcAg only exists in hepatic cells where capsids of HBV particles have been found in patients with hepatitis B.

To investigate the ability of pSW3891/HBc to elicit humoral responses in vaccinated Balb/c mice, two groups of mice were immunized with different plasmids. The experimental group of mice that received pSW3891/HBc induced a potent anti-HBc response with the titers reaching 1:97 200. In contrast, anti-HBc antibody was undetectable in the control group of mice that received only vector DNA alone. These results suggest that pSW3891/HBc can elicit strong specific anti-HBc humoral responses in Balb/c mice after DNA vaccination.

Lee et al[12] have shown that specific CTL responses can be induced by a DNA vaccine encoding HBcAg in C57BL/6 mice. Our results are in agreement with this finding. We measured the CTL component of immune response by the specific killing of syngeneic target cells pulsed with a recognized CTL epitope peptide. Our result showed the specific CTL killing with the highest specific lysis reached 73.25% at effector:target ratio of 20:1, suggesting that pSW3891/HBc vaccination induces HBc-specific CTL responses in immunized Balb/c mice.

Clinical studies of DNA vaccine against HBV infection are still in the early stage and focused on investigating the effects of prophylactic immunization in healthy volunteers. Roy et al[13] demonstrated that all healthy volunteers immunized with 1, 2, or 4 μg of DNA encoding HBsAg using the gene gun deliver system develop protective antibody titers. Volunteers who are positive for HLA-A2 have detectable antigen-specific CD8+ T cells identified by flow cytometry analysis following staining with HLA-A2/HBsAg 335-343 tetramers. Tacket et al[14] conducted the phase I safety and immune response study of an HBV DNA-based vaccine in healthy volunteers who received two immunizations with plasmid DNA encoding HBsAg on d 0 and 56 by gene gun, and found that although volunteers fail to develop protective antibody responses, it is attributed to the extremely low dose of DNA (0.25 μg) used.