METHODS: Fifty-three consecutive HCC patients with BDTT admitted in our department from July 1984 to December 2002 were reviewed retrospectively. The clinical data, diagnostic methods, surgical procedures and outcome of these patients were collected and analyzed.

CONCLUSION: Jaundice caused by BDTT in HCC patients is not a contraindication for surgery. Only curative resection can result in long-term survival. Early diagnosis and surgical treatment are the key points to prolong the survival of patients.

Jaundice is present in 19-40% of patients with hepatocellular carcinoma (HCC) at the time of diagnosis and usually occurs in advanced stages of diseases. The etiology of jaundice is mainly due to diffuse tumor infiltration of liver parenchyma, progressive liver failure (advanced underlying cirrhosis) and hepatic hilar invasion[1]. Obstructive jaundice caused by bile duct tumor thrombi (BDTT) arising from HCC is uncom-mon[2,3]. Only 1-12% of HCC patients manifest obstructive jaundice as the initial manifestation[4]. We have noticed this kind of obstructive jaundice caused by HCC with BDTT since 1980, and our initial report of HCC with BDTT was published in 1996[5]. However, BDTT caused by HCC thrombus is often misdiagnosed as hilar cholangiocarcinoma, and has a particular mode of growth and clinical features. Herein, we report a total of 53 HCC patients with BDTT to make a better understanding of the nature of this disease.

Primary tumors and total BDTT in the common hepatic duct or the common bile duct (CBD) were detected by image investigations including ultrasonography (US), computed tomography (CT), endoscopic retrograde cholangiopancreatography and magnetic resonance cholangiopancreatography (MRCP). Three patients were misdiagnosed as cholangiocarcinoma, among them two cases underwent laparotomy and T-tube drainage in other hospitals, one case was found to have lung metastasis at the initial diagnosis.

Location and size of HCC and BDTT 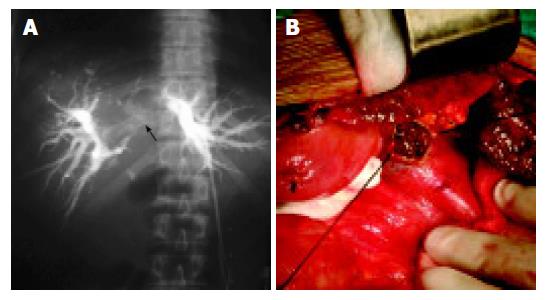 A database was established by SPSS 10.0 software. Data were expressed as mean ± SD. Kaplan-Meier method and log-rank test were used for survival statistics. P < 0.05 was considered statistically significant.

All the 53 cases were pathologically diagnosed as HCC by professional surgical pathologists. The BDTT consisted of tumor cells arranged like a nest of primary tumors, coexisting with red blood cells (RBC), leukocytes and necrotic tumor tissues.

BDTT derived from HCC is uncommon. However, bile duct invasion was commonly detected at necropsy in HCC patients with obstructive jaundice. In 1975, Lin et al[6] clinically classified such cases as “icteric type hepatoma”, which manifested as obstructive jaundice even at the early stage of tumors, and pointed out that its differential diagnosis was very difficult. In 1982, Kojiro et al[7] first described the clinical and pathological features of HCC invading the bile duct, and clarified that it was not equal to the portal vein thrombi (PVT), indicating the possibility of extensive dissemination in terms of severity of the disease. They considered that it was not necessarily a criterion of advanced disease. Actually, the rapid growth of the BDTT was rare and there was no report of BDTT extending to the duodenum. But BDTT could enlarge through blending with blood clotting and bile mucus, subsequently resulting in full obstruction of the biliary tract and obstructive jaundice.

The typical clinical features of BDTT were repeated episodes of cholangitis and fluctuating jaundice, which could be relieved by conservative treatment. For these manifestations, BDTT was often misdiagnosed as cholangiocarcinoma. Actually, in our series, three cases were misdiagnosed as hilar cholangiocarcinoma. In addition, it is essentially important to differ obstructive jaundice from hepatic jaundice caused by liver dysfunction due to extensive metastasis within the liver and underlying hepatitis and cirrhosis, because the later has no chance of surgery, but the former can gain a good outcome through operation and/or multi-modality treatment. We concluded that the following clues could help us differentiate BDTT from other types of jaundice. Patients had underlying hepatitis or liver cirrhosis, elevating serum AFP, and characteristic features of primary liver tumors presented in US and CT.

As to the imaging investigations, US is the most convenient and effective method to detect BDTT and intrahepatic primary tumors. Endoscopic sonography (EUS) can show a tumor thrombus with central echogenicity and a “nodule-in-nodule” pattern, which provides more accurate evidence for the diagnosis. Lee et al[8] reported a patient with a small HCC in caudate lobe and presence of obstructive jaundice. Preoperative EUS showed that it was tumor thrombi in CBD. In addition, intraoperative US could detect smaller or more deeply seated intrahepatic tumors. CT, MRI and MRCP could provide more information for us to know the extension of tumors and location of thrombi, and help us adopt proper treatment, in particular surgical procedure selection for patients. Intraoperative choledochoscopy and cholangiography can show the location of tumor thrombi and differentiate obstructions due to intraluminal mass, infiltrating ductal lesions or extrinsic mass compression. Jan and Chen[9] reported 28 patients with obstructive jaundice as a result of floating tumor debris from ruptured tumors in CBD. Of these, 18 cases underwent choledochoscopy, and the tumor ruptured into right intrahepatic bile duct (n = 9), left intrahepatic bile duct (n = 7), and the confluence of the left and right hepatic ducts (n = 2). Hepatectomies were performed for four patients under the guide of choledochoscopy.

The size of primary tumors did not correlate with biliary metastasis[10], and the primary liver tumors with obstructive jaundice might be small and resectable. In our series, primary liver tumors were not detectable in seven cases. Twenty-five cases had tumors with a diameter of less than 5 cm, suggesting that obstructive jaundice is not a criterion of late-stage HCC and a contraindication for surgery necessarily[11].

The managements of BDTT include hepatectomy, thrombectomy, biliary drainage, TACE, internal biliary stenting, radiotherapy, percutaneous transhepatic ethanol injection (PTEI), etc. Surgical resection has been the ideal treatment and the only way for patients to achieve a long-term survival[12-14]. Most patients might have satisfactory palliation and opportunity for cure after surgery[15]. The selection of surgical procedures was based on the nature and location of the main tumor and thrombi, severity of cirrhosis, associated biliary neoplastic strictures, the overall status of patients, and the experience of surgeons. If the condition of patients was good and the primary liver tumor was resectable, the primary tumor should be resected after thrombectomy. Even if it was only a palliative resection, it could increase the survival time. If no liver tumor was detected, biliary decompression and drainage should be performed through choledochotomy and thrombectomy. To the unresectable diseases, HAL and HACE might be beneficial to some selected cases[16-19]. Shiomi et al[12] reviewed 132 patients with HCC who underwent hepatectomy between 1980 and 1999. Of these, 17 with BDTT underwent right hemihepatectomy, 1 caudate lobectomy, 11 right or left hemihepatectomy and 5 segmentectomy. Their 3- and 5-year survival rates were 47% and 28% respectively, and the median survival time was 2.3 years, similar to those achieved in 115 patients without BDTT. Fukuda et al[20] reported that after the patients with HCC and extrahepatic bile duct thrombi underwent tumor resection and HACE, the longest survival time of some patients reached 215 mo. In our 46 cases undergoing surgery, the postoperative mortality was 17.4%, and the morbidity was 32.6%. The survival time of the patients who underwent hepatectomy, thrombectomy and biliary drainage ranged from 5 to 46 mo with a median time of 23.5 mo. We concluded that the poor prognosis of these patients was due to the late diagnosis and obstructive jaundice that resulted in irreversible liver failure. In our study, one patient died 3 d after laparotomy, indicating that early diagnosis and surgical treatment are critically important to improve the prognosis of HCC patients.

BDTT is different from PVT. Complete removal of the later is sometimes difficult because portal vein provides the main blood supply for thrombi. However, it is easy to remove BDTT because most of thrombi do not adhere to the wall of bile duct tightly. Narita et al[21] reported one case of small HCC in the left lobe with bile duct thrombi, and they found that the thrombi just adhered to the mucosa of bile duct, rather than invaded submucosa. Primary tumor resection and thrombectomy may achieve satisfactory palliation and cure. However, active hemorrhage occurred during operation in some cases, this may be due to the continuity of BDTT with the main intrahepatic tumor or BDTT invading the bile duct wall. But bleeding could be easily controlled after primary tumor was removed. For patients with multiple and unresectable tumors or biliary hemorrhage, thrombectomy and T-tube drainage with HAL could control bleeding and relieve jaundice, and subsequently improve liver function. The survival time of these patients may be prolonged.

PTCD and biliary stent placement could alleviate jaundice[22,23]. TACE and PTEI could control the growth of tumors, improve the quality of life and survival rate after jaundice was relievedp[24-26]. Endoscopic biliary drainage (EBD) for unresectable HCC with obstructive jaundice remains controversial because of no benefit to survival. Matsueda et al[27] suggested that EBD was one of the effective treatments for patients with unresectable malignant biliary stenosis, and obstructive jaundice due to bile duct thrombi. However, EBD was often difficult in HCC patients with obstructive jaundice because of proximal biliary obstruction at the hilum, and multiple tumors diffusing in the whole liver. The decision to perform EBD should be based on the nature and location of thrombi, the condition of liver function, and the presence of PVT. In addition, endoscopic sphincterotomy could benefit the discharge of necrotic thrombi and further improvement of overall status, after endoscopic nasobiliary drainage resolved the obstruction[28,29].