AIM: To investigate the autofluorescence spectroscopic differences in normal and adenomatous colonic tissues and to determine the optimal excitation wavelengths for subsequent study and clinical application.

RESULTS: When compared to normal tissues, low NAD (P)H and FAD, but high amino acids and endogenous phorphyrins of protoporphyrin IX characterized the high-grade malignant colonic tissues. The optimal excitation wavelengths for diagnosis of colonic cancer were about 340, 380, 460, and 540 nm.

Colonic cancer is an important public health concern in industrialized countries and around the world. Diagnosis and localization of early carcinoma play an important role in the prevention and curative treatment of colonic cancer. However, physical biopsies do not fully solve this problem because they are sampled at random locations, which is highly dependent on the skill and experience of the investigator. As a result, a significant number of lesions, especially the carcinoma in situ lesions, are not sampled and subsequently diagnosed[1,2]. Laser-induced autofluorescence depends on endogenous fluorophores in the biological tissue, which undergoes a change related to malignant transformations. Therefore, it is possible for us to develop more sensitive techniques for the detection of early colonic tissue. During the past two decades, autofluorescence spectroscopy has been investigated as an effective and noninvasive method for detecting and imaging the abnormal tissues from the surrounding normal tissues.

Measurement of three-dimensional fluorescence spectroscopy or fluorescence excitation-emission matrices (EEMs) for tissue samples in vitro is a crucial step to exploit the endogenous fluorophores and determine which excitation wavelengths contain the most diagnostic information for clinical diagnostic analysis[3-6]. However, an important limitation of most studies on the autofluorescence diagnosis of colonic cancer is that the selection of excitation wavelengths is based on the availability of a special light source, and few studies have been done to understand the real reasons responsible for the spectral differences[6-9]. In this study, we conducted the measurement of autofluorescence EEMs in order to investigate the spectroscopic differences in normal and adenomatous colonic tissues, and to further determine the optimal excitation wavelengths. It is hoped that information from this investigation may be useful for subsequent studies and clinical diagnosis.

Adenomatous colonic tissues (n = 5) were obtained from four patients during surgery for malignant tumors of the colon, and normal tissue sample (n = 4, matched controls) was also collected from the same patient. Each tissue sample was cut into two specimens. One specimen was sent to the pathologist for standard histopathological evaluation, the other unstained and unfixed specimen was placed on a non-fluorescence quartz substrate for laser-induced autofluorescence within 2 h after surgical resection.

No significant differences were observed in the autofluo-rescence spectra of normal and cancerous tissues. However, remarkable differences in fluorescence peaks and intensities were detected between normal and adenomatous tissue from the same patient. The representative three-dimensional autofluorescence spectra for the normal colonic tissue and adenomatous colonic tissue are shown in Figures 1A and B, respectively. The relative fluorescence intensity was recorded as a function of both excitation and emission wavelengths. Although the fluorescence intensities were indicated in arbitrary units, the same experimental set-ups were maintained throughout our measurements for comparison. 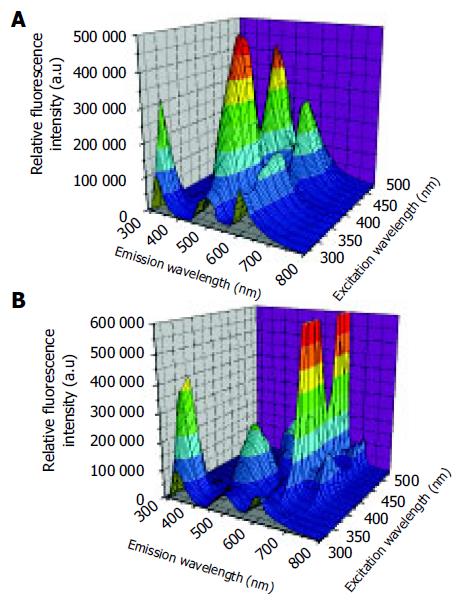 The corresponding autofluorescence EEMs for normal and adenomatous colonic tissue are displayed in Figures 2A and B, respectively. The colorized scale represents different fluorescence intensities. The plots are shown on a log contour scale, where each contour connects points of equal fluorescence intensity. 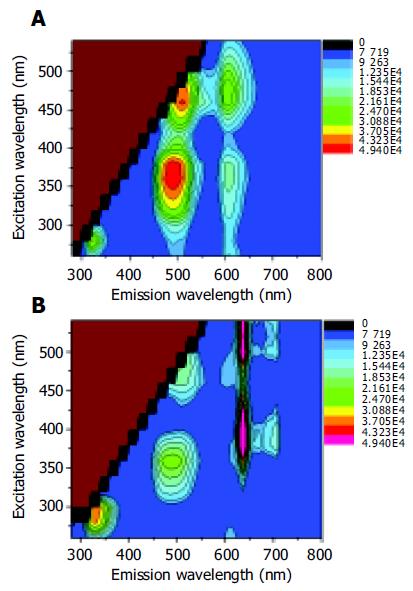 In the case of autofluorescence EEM for normal colonic tissue in Figure 2A, the primary fluorescence peaks occurred at the excitation-emission wavelength pairs of 280-330, 350-480, 350/460-605, and 460-520 nm. According to the previous studies, these fluorescence peaks were attributed to the amino acids tryptophan and tyrosine, reduced nicotinamide adenine dinucleotide (NADH) or reduced nicotinamide adenine dinucleotide phosphate (NADPH), ceroid and flavin adenine dinucleotide (FAD), respectively[10,12]. Adenomatous tissues exhibited emission peaks at 635 and 710 nm (Figure 2B) that were not observed in the emission spectra of normal colonic tissues. These remarkable peaks were the contribution of naturally occurring high endogenous phorphyrins of protoporphyrin IX in cancerous tissues[13-15]. Furthermore, the emission intensity from tryptophan and tyrosine was more intense in cancerous tissue than in normal tissue EEM. However, the endogenous fluorescence near 500 nm reduced in tumor tissues relative to normal colonic tissues. The differences might lie in the decrease of the oxidized forms of flavins and the relative amount of NAD (P)H in malignant tissues. As a result, low NAD(P)H and FAD but high amino acids and protoporphyrin IX accumulated in the human colonic malignancy. An evaluation of the average fluorescence spectrum at 260 nm excitation collected at the end of each EEM indicated that its peak fluorescence intensity was within 8% of that acquired at the beginning of each EEM. This means that minimal photobleaching occurred during the process of the 25-min EEM measurement. 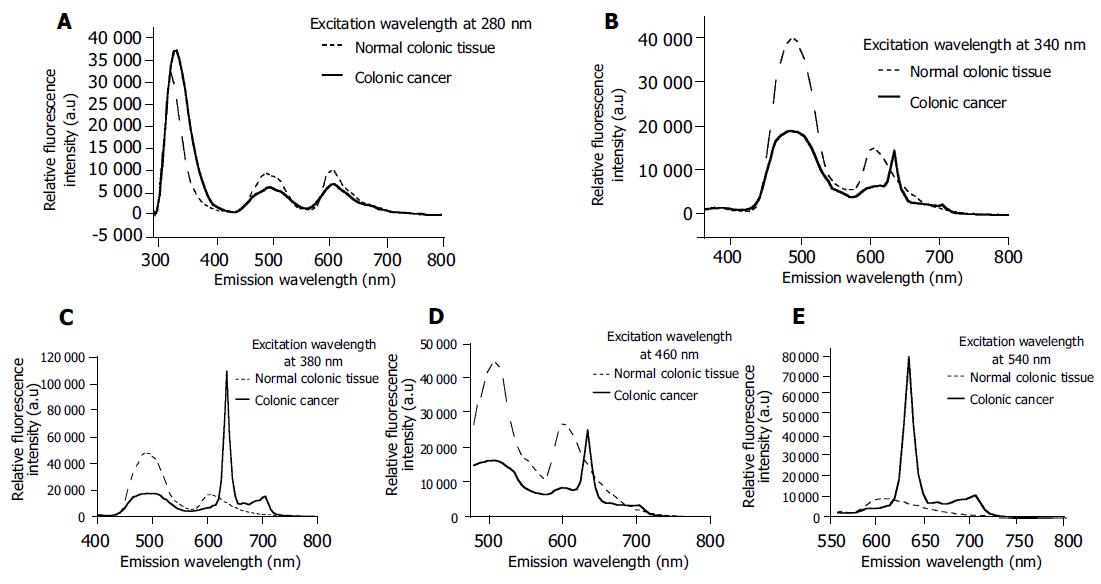 In this study, autofluorescence EEMs were measured using a standard spectrofluorimeter to determine the location of the endogenous fluorescent peaks and their relative intensity in normal and adenomatous colonic tissues. We observed significant differences in the autofluorescence spectra of normal tissues and adenomatous colonic tissues, and these differences could be attributed to the differences in fluorophores expression. The endogenous fluorophores that are speculated to cancerous transformations are the amino acids tryptophan and tyrosine, the structural proteins collagen and elastin, the coenzymes NAD(P)H and FAD, and phorphyrins[12].

Our results indicate that the fluorescence intensity of the amino acids tryptophan and tyrosine is dominant in both normal and cancerous colonic tissues at 280 nm excitation, which demonstrates the fact that amino acids are the basic structural units of protein and play an important role in biological tissues. These results also agree well with those of Pradhan et al[16] who suggested that there is an increase in tryptophan as cells progress from normal to cancerous state. Secondly, we observed that the intensity in the blue region of the autofluorescence spectra significantly reduced in adenomatous colonic tissues compared to normal tissues, which is in substantial agreement with the early work showing that the concentration of NADH and NADPH in adenomatous tissues is lower than that in normal tissues[6,7]. Moreover, Anidjar et al[17] have demonstrated a decrease of FDA in cancerous tissues, which is proved in our research. However, Georgakoudi et al[18] and Drezek et al[19] suggested that low collagen and high NAD(P)H fluorescence characterize the high-grade dysplastic lesions when compared to nondysplastic cervix tissues. It is possible that the differences in NAD(P)H fluorescence may be due to different colonic and cervix tissues and the comparable measurements should be carried out for further confirmation. In addition, it should be noted that the emission specific peaks from collagen and elastin were not shown in our tissue EEMs except for one case, suggesting that the increments of excitation wavelength should be limited to 10 nm in order to exploit the emission fluorescence from structural proteins collagen and elastin. Bottiroli et al[7] have observed a red fluorescence in some parts of tissue section from a cancerous colon. The red fluorescence has been reported by Moesta et al[13] and also demonstrated in this investigation, which can be definitely attributed to high endogenous phorphyrins of protoporphyrin IX accumulating naturally in colonic cancer.

In summary, the presence or absence of fluorescence peaks in both normal and adenomatous colonic tissues can be explained by the different endogenous fluorophores to generate autofluorescence signals, and the ability of laser-induced autofluorescence EEMs to distinguish normal from cancerous colonic tissues. The present investigation offers evidence that low NAD(P)H and FAD but high amino acids and protoporphyrin IX characterize the high-grade malignant colonic tissues. Based on our results, the optimal excitation wavelengths for diagnosis of colonic cancer are 340, 380, 460, and 540 nm.

We thank Professor Ming-Ren Li at the Department of Oncology of the First Affiliated Hospital of Fujian Medical University for providing the colonic tissue samples and the results of standard histopathological diagnosis.