METHODS: pcDNA3.1(-)-complete S containing full-length HBV S gene was constructed by insertion of HBV complete S gene into BamH I/Kpn I sites. HepG2 cells were cotransfected with pcDNA3.1(-)-complete S and pSV-lacZ. After 48 h, cells were collected and detected for the expression of β-galactosidase (β-gal). Suppression subtractive hybridization and bioinformatics techniques were used. The mRNA of HepG2 cells transfected with pcDNA3.1(-)-complete S and pcDNA3.1(-) empty vector was isolated, and detected for the expression of complete S protein by reverse transcription polymerase chain reaction (RT-PCR) method, and cDNA was synthesized. After digestion with restriction enzyme RsaI, cDNA fragments were obtained. Tester cDNA was then divided into two groups and ligated to the specific adaptors 1 and 2, respectively. After tester cDNA had been hybridized with driver cDNA twice and underwent nested PCR twice, amplified cDNA fragments were subcloned into pGEM-Teasy vectors to set up the subtractive library. Amplification of the library was carried out within E. coli strain DH5α. The cDNA was sequenced and analyzed in GenBank with BLAST search after polymerase chain reaction (PCR) amplification.

RESULTS: The complete S mRNA could be detected by RT-PCR in HepG2 cells transfected with the pcDNA3.1(-)-complete S. The activity of β-gal in HepG2 cells transfected with the pcDNA3.1(-)-complete S was 6.9 times higher than that of control plasmid. The subtractive library of genes transactivated by HBV complete S protein was constructed successfully. The amplified library contains 86 positive clones. Colony PCR showed that 86 clones contained DNA inserts of 200-1 000 bp, respectively. Sequence analysis was performed in 35 clones randomly, and the full length sequences were obtained with bioinformatics method and searched for homologous DNA sequence from GenBank, altogether 33 coding sequences were obtained. These cDNA sequences might be target genes transactivated by complete S protein of HBV. Moreover, two unknown genes were discovered, full length coding sequences were obtained by bioinformatics techniques, one of them was named complete S transactivated protein 1 (CSTP1) and registered in GenBank (AY553877).

Hepatitis B virus (HBV) genome is defined as four open read frames (ORFs), which are named as the regions of S, C, P, X, respectively. The region of S is divided into the sub-regions of pre-S1, pre-S2 and S according to different initial code ATG in frame. Dong et al [1] have shown that there is ORF before pre-S1 region in the genome of HBV from serum of patients with long and accurate polymerase chain reaction (LA-PCR). This region is 135 bp, which is named temporarily as pre-pre-S and its promoter activities are confirmed in 277 bp upstream nucleotide sequences before pre-S1 gene[2]. Pre-pre-S, pre-S1, pre-S2 and S genes are translated in frame according to the same ORF. It is well-known that HBV causes acute and chronic infections of the liver, especially chronic infections may result in remarkable consequences[3]. HBV is considered to be a major etiological factor in the development of human hepatocellular carcinoma (HCC)[4-9]. Although the precise role of HBV in the etiology of HCC is not well understood, data have shown that some HBV proteins can exert a significant transactivating activity on both viral and cellular promoter[10]. This mechanism may have a close relation with the formation of HCC.

MATERIALS AND METHODS
Construction and identification of expression vector

Gene expression comparisons by suppression subtractive hybridization according to the manufacturer’s instructions of PCR-selectTM cDNA subtraction kit (Clontech Co., USA). In brief, 2 µg of mRNA from the tester and the driver was subjected to cDNA synthesis. Tester and driver cDNAs were digested with RsaI. The tester cDNA was subdivided into two portions, and each was ligated with a different cDNA adapter. In the first hybridization reaction, an excess of driver cDNA was added to each sample of tester. The samples were heat denatured and allowed to anneal. Because of the second-order kinetics of hybridization, the concentration of high- and low-abundance sequences was equalized among the single-stranded tester molecules. At the same time single-stranded tester molecules were significantly enriched for differentially expressed sequences. During the second hybridization, two primary hybridization samples were mixed without denaturization. Only the remaining equalized and subtracted single-stranded tester cDNAs could re-associate forming double-stranded tester molecules with different ends. After filling in the ends with DNA polymerase, the entire population of molecules was subjected to nested PCR with two adapter-specific primer pairs.

PCR was performed on un-subtracted and subtracted secondary PCR products with the G3PDH 5’- and 3’-primers, respectively. From each reaction, 5 μL sample was removed, and the rest of the reaction was put back into the thermal cycler for five more cycles. The above step was repeated thrice, and then 5 μL sample (i.e., the aliquots were removed from each reaction after 18, 23, 28, and 33 cycles) was examined on 2.0% agarose gel. 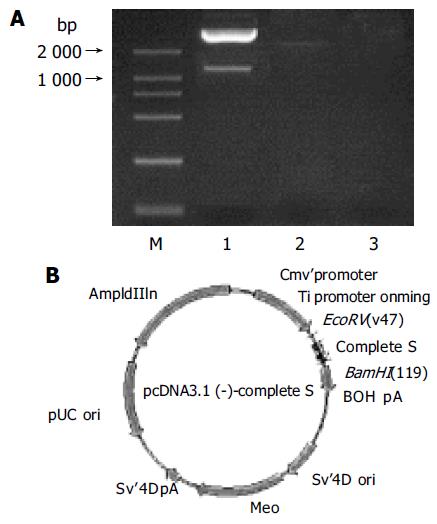 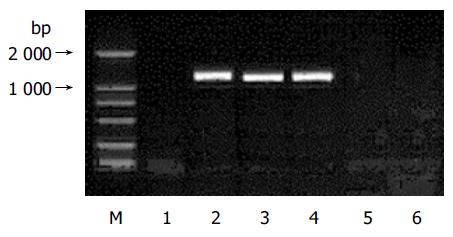 The stable expression of pcDNA3.1(-)-complete S in HepG2 cells was also confirmed by Western blotting hybridization at a high level. 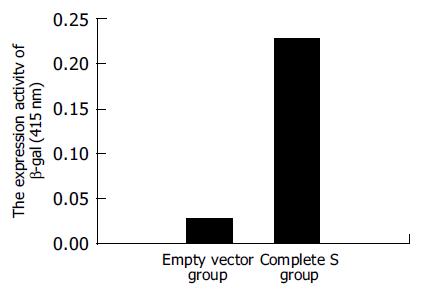 The G3PDH (a housekeeping gene) primers were used to confirm the reduced relative abundance of G3PDH following the PCR selection procedure. The result displayed that the G3PDH abundance of subtracted secondary PCR products significantly decreased compared to the un-subtracted one, indicating that the subtractive library had a high subtraction efficiency (Figure 4). 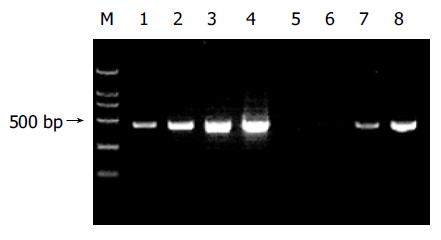 Using suppression subtractive hybridization technique, we obtained a total of 86 positive clones. These clones were prescreened by PCR amplification to ensure that only clones with different inserts were subjected to sequencing analysis (Figure 5). Eighty-six clones contained 200-1 000 bp inserts. A total of 35 clones from cDNA library were randomly selected and sequenced, and 33 coding sequences were obtained. The data are presented in Table 1. The smear difference in subtractive library was displayed after electrophoresis of PCR products on 2% agarose gel (Figure 6). 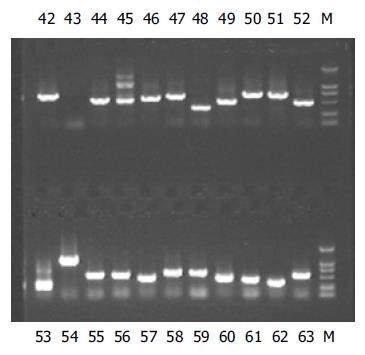 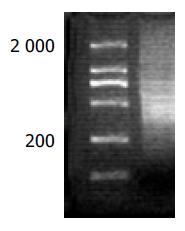 The open reading frame of HBV complete S gene consists of four coding regions: pre-pre-S, pre-S1, pre-S2 and S, each starting with an ATG codon in frame. Through in frame translational initiation at each of the four ATG codons, complete S (pre-pre-S +pre-S1+pre-S2+S), large (LHBs; pre-S1+pre-S2+S), middle (MHBs; pre-S2+S) and small (SHBs; S) envelope glycoproteins can be synthesized[14-18]. The transactivator function of the surface protein requires the cytoplasmic orientation of the pre-S2 domain (the minimal functional unit) that occurs in the case of MHBst and in a fraction of Labs[19,20]. Some studies indicate the biological significance of the pre-S2 transactivators[21]. But we firstly discussed the transactivator function of HBV complete S protein in the present study.

(1) The genes involved in cell structure and cell cycle that possess the important ability to control cell growth, differentiation and adherence, such as ribosomal protein, mitochondrion, eukaryotic translation elongation factor.

(3) The genes involved in the mechanism underlying the development of hepatocellular carcinoma. Cyclin-dependent kinase 4 (CDK4) is a key regulator of cell cycle. It has been shown that a variety of cell cycle-related proteins play an important role in the process of hepatocarcinogenesis. CDK4 is related to the regulation of the cyclin G1 phase, and significantly elevates in HCC compared to surrounding cirrhotic tissues by Western blot and in vitro kinase assays. The enhanced cyclin D1-related kinase activity in HCC was accompanied with the up-regulation of CDK4 activity. In addition, the protein levels and kinase activities of CDK4 are higher in poorly differentiated and advanced HCC. In conclusion, the increases of cyclin D1 and CDK4 play an important role in the development of HCC. CDK4 activation may be closely related to the histopathologic grade and progression of HCC[22-24]. But CDK4 does not increase in children with hepatic carcinoma[25]. Amino acid transporter system A2 (ATA2) is responsible for Na+-independent amino acid transporter system. When amino acid is starved, the expression of ATA2 increases, suggesting that this expression is directly related to the activity of amino acid transporter[26]. Its mRNA increases in the biopsy of hepatocirrhosis and hepatic carcinoma[27], especially in chorion after hepatectomy, suggesting that ATA2 is closely associated with hepatic regeneration[26,28]. ATA2 is cloned in hepatic carcinoma HepG2, and increases in patients of hepatic carcinoma[29].

(4) The genes controlling hepatic cell infection and apoptosis, such as adenylate kinase 2(AK2) protein. AK2 gene located at the right arm of the second chromosome may play a role in maintaining the levels of ADP/ATP by releasing two-molecule ADP from ATP to AMP[30]. The release of two mitochondrial proteins, cytochrome C and apoptosis-inducing factor (AIF), into the soluble cytoplasm of cells undergoing apoptosis has been well established. Since only AK2 intermembrane proteins release from mitochondria during the early phase of the apoptotic process, AK2 is very important in cell apoptosis. AK2 and cytochrome C are translocated in cytoplasm gelatum in apoptosis model[31]. Therefore AK2 plays a role in inducing cell apoptosis. Apolipoprotein H (APOH), is named as beta-2-glycoprotein I and anticoagulative serum protein. The polyomorphous APOH gene is closely related to fat metabolism, coagulation and hypertension[32]. It is the pre-S of HBsAg that results in HBsAg combination with APOH. Resecting phosphatide and oxygenated phosphatide could disturb this mutual action, suggesting that this action is involved in the ectoblastic phosphatide[33]. Furthermore, it is restrained from rebuilding HBsAg, anti-HBsAg and APOH. APOH may be the vector of HBV and plays a role in HBV infection. APOH chiefly combines with complete Dane HBV particle with telescope, and the activity of APOH-HBsAg is the highest in patients with active duplication[33]. This combination facilitates virus particle entrancing hepatic cells, and plays an important role in the beginning of HBV infection[34].

We testified the transactivator ability of HBV complete S protein, and constructed the subtractive cDNA library of genes transactivated by complete S protein. These genes are closely correlated with carbohydrate metabolism, immunoregulation, occurrence and development of tumor. How these genes affect occurrence and development of chronic hepatitis B, hepatic fibrosis and hepatocarcinoma needs to be further studied.