AIM: NF-κB, regulate the expression of cytokine-inducible genes involving immune and inflammatory responses, will be potential therapy approach for allograft from rejection. In this study, we use pCMV-IκBαM vector to inhibit NF-κB activation and investigate the effect of pCMV-IκBαM in inhibition of T cells adhesion to endothelial cells.

METHODS: The NF-κB activity was detected with pNF-κB reporter gene and electrophoretic mobility shift assay. Expression of cell surface molecules was detected by RT-PCR and flow cytometer. The cell-cell adhesion assay was performed to determine the effect of pCMV-IκBαM in inhibition of T cells adhesion to endothelial cells.

RESULTS: We could find that NF-κB activity is inhibited by over-expression of non-degraded IκBα protein. Expression of adhesion molecules like ICAM-1, VCAM-1, and P-selectin as well as cell-cell adhesion were inhibited significantly by transfection of the pCMV-IκBαM vector.

CONCLUSION: Our results indicate that the pCMV-IκBαM, which inhibit the activity of NF-κB through over-expression of non-degraded IκBα protein, can be used for gene therapy in diseases involving NF-κB activation abnormally like organ transplantation via inhibiting cell adhesion.

NF-κB, a DNA binding protein complex, is usually present in the cytosol as an inactive complex. IκBα, an associated protein, renders this complex inactive by shielding the nuclear localization signal (NLS). Upon IκB phosphorylation and its subsequent degradation, the NF-κB subunit P65 will translocate to the nucleus, where it binds to specific DNA sequences in the promoter region of several cytokine-inducible genes and up-regulates their transcription[1,2]. Extensive studies have showed that inhibition of NF-κB will be potential therapy approach for allograft from rejection[3-5]. The potent immunosuppressive agents FK506 and cyclosporin A (CsA) are reported to switch off gene transcription by inhibiting a key signaling phosphatase, calcinurin, which is involved in the activation of NF-κB[6,7]. Glucocorticoid, another major immunosuppressive agent, is also believed to work partly via inhibition of NF-κB activation[8]. The detail mechanism about inhibition of NF-κB protecting the graft is not clear till now.

In the present study, we focus on the transcriptional factor NF-κB in endothelial cells activation and adhesion to T cells. We use the vector encoding domain negative protein mutated at ser-32 and ser-36 IκBα to inhibit activation of NF-κB.

Cell culture and transfection for ECV

All of the cells were grown in RPMI 1640 supplemented with 10% fetal bovine serum (FBS), 100 U/mL penicillin and 100 μg/mL streptomycin. Cells were maintained in a standard culture incubator with humidified air containing 50 mL/L CO2 at 37 °C.

We performed transfection according to the instruction manual of FuGENE 6 Transfection Reagent with modifications. Briefly, we seeded 1×105 cells in 1 mL RPMI 1640 containing 10% FBS medium in 24-well plate and incubated overnight until the ECV cells were 60% confluent. As for stable transfection, added 100 μL serum-free medium (SFM) containing 3 μL FuGENE 6 and 1 μg pCMV-IκBα or pCMV-IκBαM. The plate was incubated for 24 h for expression of reporter gene. Then we added 600 ng/mL G418 in every well and incubated for 7 d. After 7 d incubation, the concentration of G418 was decreased to 300 ng/mL and incubated for more than 3 wk. The over-expression of IκBα protein cells was selected using Western blotting. The cells stably transfected with pCMV-IκBα and pCMV-IκBαM were referenced to ECVWT and ECVMT, separately.

As for transient transfection, 100 μL SFM containing 3 μL FuGENE 6 and 1 μg pNF-κB Luc was added and cells were incubated for 24 h. After treated with PMA for 12 h, the cells were lysed and luciferase activity was measured using luciferase assay system.

The concentrations of samples were measured using protein assay kit with BSA protein standard solution as reference. Samples were stored at -70 °C until use.

The consensus oligonucleotide of NF-κB was obtained commercially from Santa Cruz and the sequence was shown as the following: NF-κB (5’-AGT TGA GGG GAC TTT CCC AGG C-3’). EMSA were performed according to Holmes’s protocol[15]. Briefly, NF-κB consensus oligonucleotide was radiolabeled with [γ-32P]ATP in the presence of T4 polynucleotide kinase. Five micrograms nuclear extract was incubated with labeled probe in 1 µg of poly(dI-dC) for 30 min. Complexes were separated on a 5% polyacrylamide gel in 0.5×TBE and dried using dryer (Bio-Rad, USA) and autoradiographed at -80 °C.

ECVMT and ECVWT cells were treated with PMA (50 nmol/L) for 12 h. Then cells were harvested and washed thrice using cold PBS. Then the cells were incubated with FITC-labeled CD54(ICAM-1), FITC-labeled CD62 (VCAM-1) or PE-labeled CD106(P-selectin) antibodies. The fluorescence densities were determined using flow cytometer (Coulter, USA) and the experiment was repeated thrice.

Adhesion of Jurkat cells to ECV304

We used Jurkat cells for lymphocyte-endothelial cell adhesion assay. The adhesion procedure was performed according to Roy[16]. Briefly, monolayers of cells were seeded at a density of 104 cells/well in 96-well plate (Becton Dickinson, NJ, USA). After 24 h of seeding, the cells were treated with PMA (50 nmol/L) for 12 h. Before cell-cell adhesion assay, the ECV monolayers were washed thrice with PBS. Jurkat T-cells (2×105 cells/well) were co-cultured with ECV monolayer for 2 h in a culture incubator. After the co-culture period, the non-adherent Jurkat T-cells were removed by washing each well four times with PBS carefully. Jurkat cell adhesion was determined by visual counting under a phase-contrast microscope. Both Jurkat cells and ECV were counted in five fields of each well at 100× magnification by two individuals, and the average values were taken. The adhesion rate is expressed as the number of attached Jurkat cells per 100 ECV cells.

Results are presented as mean±SD of at least three separate experiments. Differences between means of groups were determined by Student’s t-test. The level of significance was set at P<0.05 or P<0.01.

We stably transfected the ECV304 cells with the pCMV-IκBαM vector, which encoded domain negative IκBα protein mutated at ser-32 and ser-36 and also with the pCMV-IκBα as control. Firstly, we extracted the total protein after being treated with PMA (50 nmol/L) for 45 min. The expression level of IκBα was determined with specific antobody. As shown in Figure 1A, IκBα level was higher in ECVMT cells after treated with PMA compared with ECVWT cells. To determine the NF-κB activity further, the nuclear proteins were extracted after treated with PMA for 45 min. These proteins were applied to EMSA. Figure 1B showed us that pCMV-IκBαM could inhibit the activity of NF-κB significantly.

Adhesion molecules expression in endothelial cells is dependent, at least in part, on the activation of NF-κB[1]. To determine whether the pCMV-IκBαM can inhibit the expression of adhesion molecules, we performed RT-PCR to determine the mRNA level of adhesion molecules in the total RNA extracted from the cells treated with PMA (50 nmol/L) for 12 h. The results were shown as ratio compared to housekeeping gene GAPDH expression. As shown in Figures 2A and 2B, we can see that the ICAM-1 and VCAM-1 mRNA levels are inhibited significantly in ECVMT cells compared to ECVWT cells (40.3% vs 18.7% for ICAM-1 and 27.3% vs 16.7% for VCAM-1). We also compare the protein levels of various adhesion molecules by flow cytometer. The cells were harvested after stimulation with PMA (50 nmol/L) for 12 h. As shown in Figure 2C, the pCMV-IκBαM can inhibit the expression of adhesion molecules including ICAM-1, VCAM-1 and P-selectin. As for ICAM-1, 82.5% cells expressed ICAM-1 in ECVWT cells after being treated with PMA (50 nmol/L) compared 53.2% positive cells in ECVMT cells. Almost the same results were found in VCAM-1 and P-selectin expression between ECVMT cells and ECVWT cells (25.3% vs 66.1% for VCAM-1; 65.4% vs 35.7% for P-selectin). 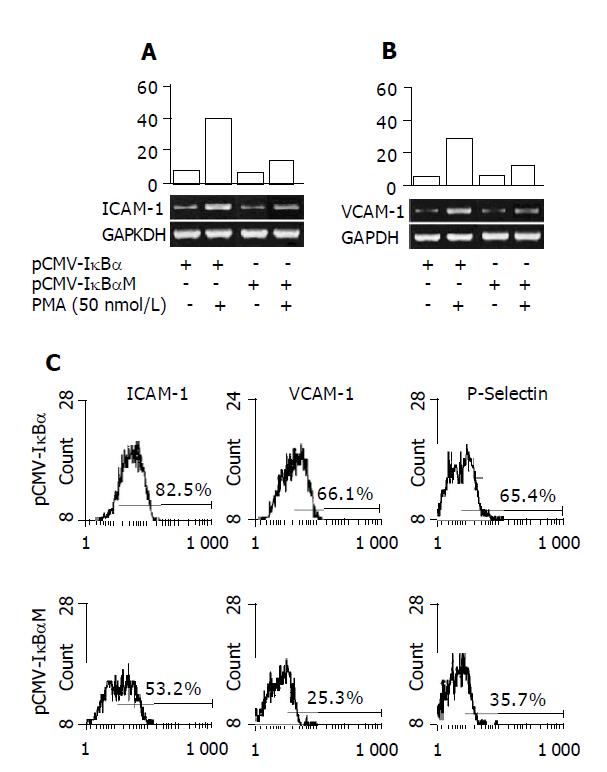 Figure 2 Down-regulation of PMA-induced adhesion molecules expression in ECV cells transfected with pCMV-IκBαM compared with pCMV-IκBα. RT-PCR analysis was performed with primers specific for ICAM-1 (A) and VCAM-1 (B). C: The expression of ICAM-1, VCAM-1 and P-selectin were detected using specific antibodies by flow cytometry. Results are representative of at least three independent experiments.
Inhibit the adhesion of T cells to ECV cells

We then evaluated the effect of pCMV-IκBαM on the adhesion of human T lymphocyte to ECV304 cells as mentioned in Methods section. After the ECV cells were treated with PMA (50 nmol/L) for 24 h, the Jurkat T cells were added and co-incubated for further 2 h. Then we calculated the adherent cells using phase-contrast microscope after non-adherent cells were washed away using cold PBS (Figure 3). We found that the pCMV-IκBαM could inhibit the adhesion of Jurkat T cells to ECV cells from 71.4±5.2% to 42.2±3.7% after being treated with PMA for 12 h (P<0.05). 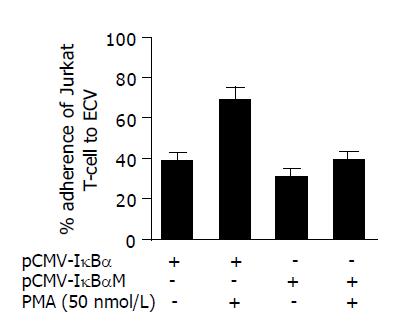 Figure 3 Adhesion of human Jurkat T-cells to PMA-activated endothelial (ECV) cells is inhibited by transfection with pCMV-IκBαM compared with pCMV-IκBα. ECV cells were activated with PMA (50 nmol/L) for 12 h. Cells were washed thrice with PBS and then co-cultured with Jurkat T-cells for 2 h. Then the cells were washed with PBS thrice. Jurkat cell adhesion was determined by visual counting under a phase-contrast microscope. P<0.05 when compared ECVMT with ECVWT.
DISCUSSION

The adhesion of leukocyte to the vascular endothelial cells is a critical step in the immunological response and involves recruitment and infiltration of leukocytes to the site of tissue injury or allograft. The endothelial cell, as the first barrier faced the alloantigen, will be activated upon stimulation like cytokines (e.g., PMA, IL-1, TNF-α,) in vitro as well as in vivo at sites of allograft. Activated endothelial cells express adhesion molecules to assist adhesion between activated T cells and endothelial cells[18,19]. Among these molecules are P- and E-selectin, intercellular adhesion molecule-1 (ICAM-1), and vascular cell adhesion molecule-1 (VCAM-1), on the endothelial cells, and their respective counter receptors, P-selectin glycoprotein ligand-1 (PSGL-1), leukocyte function-associated antigen-1 (LFA-1) and very late antigen-4 (VLA-4), on the leukocytes[17]. Activated endothelial cells also can secrete chemokines such as IL-6, IL-8 and MCP-1[20,21], which can recruit leukocyte. ICAM-1, which has been studied extensively, binds to its ligand LFA-1 on lymphocytes and promotes lymphocytes binding to the endothelium and facilitates the lymphocytes to invade the graft[22-24]. Blockade of ICAM-1, either with monoclonal antibodies or with antisense oligodeoxynucleotides, has been shown to decrease reperfusion injury and prolong the survival of allograft[25-27].

Activation of endothelial cells requires multiple transcriptional factors. Nuclear factor κB, one of such transcription factors, is held in the cytoplasm by inhibitory IκB proteins (IκBs) and regulates many genes involving immune and inflammatory pathways such as various proinflammatory cytokines, adhesion molecules and apoptosis-associated factors[8,28]. Accumulating evidence clearly demonstrates that blocking the activity of NF-κB might arrest the progression of acute rejection by interrupting the activation of genes of major inflammatory cytokines and adhesion molecules[29]. We use the pCMV-IκBαM vector, which encodes domain negative nondegraded IκBα protein mutated at ser-32 and ser-36 to inhibit the activation of NF-κB. We found that the adhesion molecules including ICAM-1, VACM-1 and P-selectin were down-regulated under inhibition of NF-κB. We also mimic the procedure of cell-cell adhesion in vitro between endothelial cells and T cells. The results told us that inhibition of NF-κB could inhibit endothelial cell activation and decrease cell adhesion.

In conclusion, we propose that pCMV-IκBαM vector can be used as novel immunological strategy. Further explorations were needed to verify the effect of pCMV-IκBαM to protect the allograft from rejection in vivo.