AIM: To investigate the expressions of ornithine decarboxylase (ODC), MMP-2, and Erk, and their relationship in human colon tumors.

RESULTS: ODC activity, MMP-2 expression, and Erk phosphorylation were significantly elevated in colon tumors, compared to those in adjacent normal tissues. A significant correlation was observed between ODC activities and MMP-2 levels.

CONCLUSION: This is the first report showing a significant correlation between ODC activities and MMP-2 levels in human colon tumors. As MMP-2 is involved in cancer invasion and metastasis, and colon cancer overexpresses ODC, suppression of ODC expression may be a rational approach to treat colon cancer which overexpresses ODC.

Ornithine decarboxylase (ODC) catalyzes the initial step in the biosynthesis of polyamines and ODC activities are associated with malignant status[1]. Overexpression of ODC could lead to cell transformation, tumor invasion, and metastasis[2-4]. A number of studies demonstrated increased expression of ODC in a variety of cancers including colorectal cancer[1].

Mitogen-activated protein (MAP) kinase is a key enzyme of the signal transduction pathways triggered by extracellular signals, including mitogens, growth factors, and cytokines[14-16]. Erk1/2, extracellular signal-regulated kinases that are also termed as p44 and p42 MAP kinases, are ubiquitously expressed. p38 MAP kinase is activated by a variety of cellular stresses, including osmotic shock, inflammatory cytokines, lipopolysaccharides, UV irradiation, and growth factors[17]. Limited information is available concerning MAP kinase expression in human surgically removed colon cancer tissues and its adjacent normal tissues[18]. Hoshino et al[18] showed constitutive activation of MAP kinases in 138 human cancer cell lines, and primary tumor tissues including colon cancer. However, it was reported that the activities of Erk1/2, and p38 MAP kinase were downregulated in the majority of human colon cancers[19]. Sakakura et al[20] also reported infrequent activation of MAP kinase in human colon cancer. Recently, the p38 MAP kinase signaling pathway was shown to be important for the induction of MMP-1 and MMP-9 by extracellular stimuli[21,22]. Therefore, it is imperative to analyze the expression levels of MAP kinases (Erk1/2 and p38) in human surgically removed colon cancer tissues and its adjacent normal tissues.

Colon cancer is one of the most common malignancies in the world and is incurable in its advanced stages[23]. Therefore, it is important to understand the mechanism of invasion and metastasis, and to develop better treatments to prevent or cure metastatic colon cancer. As colon cancer has increased expression levels of ODC, MMP-2, and MAP kinase, these three molecules are the candidate targets for treatment of colon cancer. It is important to clarify a correlation among expressions of these three molecules. We previously found that ODC overexpression in fibroblasts led to cellular transformation and invasion with concomitant induction of MMP-2 and Erk1/2[3]. Little information is available concerning the correlation among ODC, MMP-2, and MAP kinase expressions in cancer in vitro and in vivo. The aim of this study was to investigate the expressions of ODC, MAP kinase, and MMP-2, and further to elucidate the relationship among these expressions in human colon cancer. We discussed the strategies of colon cancer treatment or prevention using α-difluoromethylornithine (DFMO), an irreversible inhibitor of ODC.

ODC activity was determined using [1-14C]-ornithine as a substrate as described previously[3].

The results were expressed as mean±SD from three independent experiments. The significance was determined by the paired t-test or Pearson’s test. Statistical analyses were performed using the Statview 4.5 software (Abacus Concepts, Inc., Berkeley, CA, USA). 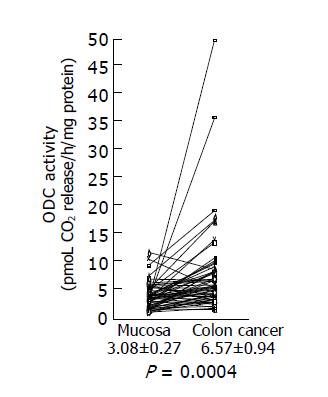 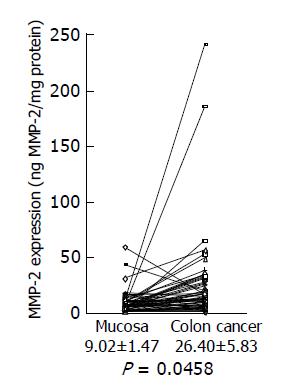 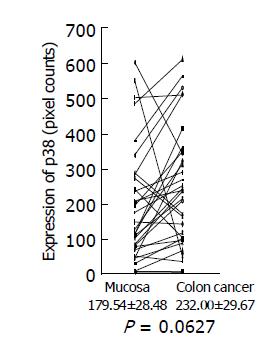 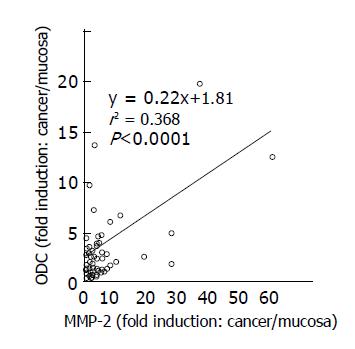 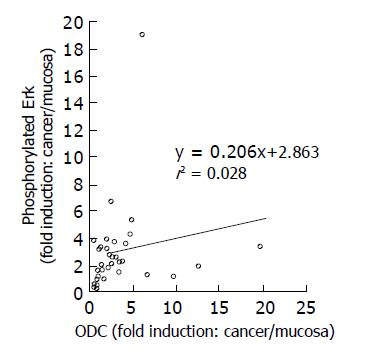 Metastasis is a multistep process, which includes local invasion, intravasation and extravasation of cancer cells[5]. Major functional contribution of MMPs is facilitation of degradation of basement membranes between primary tumor and distant metastasis sites. As MMP-2 preferentially degrades type IV collagen, a major component of basement membrane, MMP-2 has been thought to play a major role in invasion process[5,8]. Recent evidence indicates that MMPs including MMP-2 play a much broader role in metastasis both before and after the degradation of basement membrane[25]. For example, MMP-2 contributes to the initiation of tumor growth at both primary and metastasis sites. This may involve regulation of growth environment by regulating access to growth factors from the extracellular matrix surrounding the tumor, either directly or via a proteolytic cascade. The role of MMPs in angiogenesis is considered to be very important, as angiogenesis is required for tumor growth and invasion. Recent studies indicated that MMPs, especially MMP-2, played a pivotal role in angiogenesis[26-28]. In fact, mice deficient in MMP-2 exhibited reduced angiogenesis in vivo[29]. As MMP-2 overexpression in colon cancer has been found to be crucial for cancer invasion and metastasis[30], suppression of ODC using DFMO or DFMO in combination with other chemopreventives may be a rational approach to the treatment of colon cancer.

MAP kinase pathways play a major role in converting mitogenic and stress stimuli into nuclear responses. Constitutive activation of the 41-/43-ku MAP kinase (Erk1/2) signaling pathway was shown in human tumors[18]. In the present study we also found increased expression of phosphorylated Erk1/2 in colon cancer. As ODC and Erk1/2 expressions were not correlated in the present study, the data suggested that Erk1/2 expression was not a downstream signal transduction event after ODC expression in human colon cancer. Wang et al[19] reported that the activities of Erk1/2, JNK1 and p38 MAP kinase were downregulated in the majority of human colon cancers. The reason for the discrepancy of our result and their result concerning Erk1/2 is not clear. They discussed that protein kinases other than MAP kinases might play a more crucial role in colon carcinogenesis[19]. In the present study we showed that increased expression of phosphorylated p38 MAP kinase over the level of the normal mean±SD was observed only in 3 of 33 (9.1%) colon cancers. This result might be inconsistent with that of their report[19]. p38 MAP kinase was reported to be involved in other MMP (MMP-1 and MMP-9) expression[21,22]. However, our result and Wang’s result[19], taken together, suggest that p38 MAP kinase may not be involved in carcinogenesis or invasive phenotype or MMP-2 expression in human colon cancer.

As colon cancer is still incurable at advanced stages, new strategies for prevention and treatment are desired[23]. In the 1980s, DFMO was abandoned due to limited efficacy and significant adverse effects such as nausea, vomiting, abdominal pain, diarrhea, and hearing loss in phase II clinical trials[23,31,32]. In the following decade, DFMO was resuscitated as a chemopreventive agent[33,34]. DFMO (0.2-1.0 g/m2/d) effectively inhibited ODC activities in target organs such as the colorectum in patients with a personal or family history of colorectal cancer without side effects such as cytotoxicity[35,36]. DFMO is now being tested in phase II/III trials involving patients at risk for colorectal cancer[23]. Recent studies have shown that DFMO had synergistic reductions in intestinal neoplasia when DFMO was administered with cyclooxygenase inhibitors such as piroxicam or aspirin even as the doses of both agents were reduced as much as 50%[37-41]. Thus, DFMO in combination with other chemopreventive agents should be evaluated for the efficacy against colon cancer. As PD 184352 (MEK inhibitor)[42] or BB-94 (MMP inhibitor)[43] has been available for clinical trial, DFMO in combination of PD 184352 or BB-94 may be a rational approach to the treatment of colon cancers overexpressing ODC.