AIM: To investigate the cellular effects of hybrid polar compound hexamethylene bisacetamide (HMBA) on the growth and apoptosis of human hepatocellular carcinoma cells and to provide the molecular mechanism for potential application of HMBA in the treatment of liver cancer.

RESULTS: The growth of SMMC-7721 cells was significantly inhibited by HMBA, and the growth inhibitory rate was 51.1%, 62.6%, 68.7% and 73.9% respectively after treatment with 5.0, 7.5, 10.0 and 12.5 mmol/L of HMBA. In the cells treated with 10 mmol/L of HMBA for 72 h, the population of cells at sub-G1 phase significantly increased, and the apoptotic bodies and condensed nuclei were detected. Moreover, treatment of SMMC-7721 cells with 10 mmol/L of HMBA down-regulated the expression of Bcl-2 anti-apoptotic protein, while slightly up-regulated the level of pro-apoptotic protein Bax.

CONCLUSION: Treatment with 10.0 mmol/L of HMBA can significantly inhibit the growth and induce apoptosis of human hepatocellular carcinoma SMMC-7721 cells by decreasing the ratio of Bcl-2 to Bax.

Hepatocellular carcinoma (HCC) is one of the most common malignancies worldwide and accounts for as many as one million deaths annually[1]. HCC is a leading cause for cancer-related deaths of adults in Asia and sub-Saharan[2,3]. In China, the mortality rate of HCC ranks first in rural areas and second in cities[4,5].The main environmental risk factors identified to be closely associated with hepatocellular carcinoma incidences are hepatitis B virus (HBV) and hepatitis C virus (HCV) infections, which account for more than 80% of HCC cases worldwide. Other agents that also play an important role in HCC development include aflatoxin B1 (AFB1) exposure, heavy alcohol consumption and cigarette smoking[3,6]. However, the cellular and molecular mechanism underlying HCC development remains poorly understood. HCC is still one of the worst malignant diseases without an effective treatment. Therefore, it is critical to search for novel chemotheraputic agents that can inhibit the growth or induce the apoptosis of hepatocellular carcinoma cells.

Hybrid polar compounds are potent inducers of cell differentiation for a wide variety of tumor cells[7]. Hexamethylene bisacetamide (HMBA), a prototype of hybrid polar compounds, has been used to induce terminal differentiation in a number of leukemic and solid tumor cell lines[8-12]. In the previous reports[13,14], we have shown that HMBA at a low concentration induced differentiation of human hepatocellular carcinoma SMMC-7721 cells, a cell line that has been previously used as an appropriate cell model in vitro to study the cellular mechanism of HCC development[15-22]. However, whether HMBA at a higher concentration can induce apoptosis of hepatocellular carcinoma cells has not been determined yet. Here we reported the effects of HMBA on the growth and apoptosis of human hepatocellular carcinoma SMMC-7721 cells. We revealed that treatment with 10.0 mmol/L of HMBA significantly inhibited the growth and induced apoptosis of SMMC-7721 cells by down-regulating the Bcl-2/Bax ratio.

SMMC-7721 cell line was obtained from the Institute of Biochemistry and Cell Biology, Shanghai Institute of Biological Sciences, Chinese Academy of Sciences. Cells were maintained in DMEM supplemented with 100 mL/L heat-inactivated fetal bovine serum, 100 units/mL of penicillin and 100 mg/L of streptomycin at 37 °C with 50 mL/L CO2 in atmosphere.

SMMC-7721 cells were seeded in 96-well plates at a density of 7 × 103 cells/well. After 24 h, the cells were treated with different concentrations of HMBA for different times. One hundred µL MTT (250 mg/mL) was added to the cells per well. The plate was incubated for 4 h at 37 °C until purple formazan crystal developed. Then MTT-containing medium was removed and 200 µL DMSO solution (containing 900 mL/L DMSO and 100 mL/L 0.1 mol/L of glycine-NaOH) was added to each well and incubated at room temperature for 30 min. The absorbance at 570 nm was read and four wells were examined with an ELISA plate reader (Bio-Rad) for each treatment.

SMMC-7721 cells and the cells treated with 10 mmol/L of HMBA for 72 h on 6-well plates were examined under phase-contrast microscopy (Leica DM IRB).

SMMC-7721 cells untreated and treated with 10 mmol/L of HMBA for 72 h were assayed for DNA content using the propidium iodide staining method and subsequent flow cytometry analysis. Briefly, the cells (generally 2 × 106) were collected, rinsed in PBS, resuspended and fixed in 70% ethanol at 4 °C overnight. The fixed cells were pelleted, resuspended in PBS, and incubated in 100 mg/L of RNase A at 37 °C for 30 min and in 50 mg/L of propidium iodide at 4 °C for 30 min in the dark. Cell cycle distribution at different phase was analyzed with FACScan flow cytometry (Becton Dickinson). More than 10 000 events were acquired for analysis. The nuclear morphology of the stained cells was also observed under fluorescence microscope (Leica DM IRB).

SMMC-7721 cells untreated and treated with 10 mmol/L of HMBA were cultured on coverslips in a 6-well plate. After 72 h, the cells growing on coverslips were fixed with cold acetone for 10 min, rinsed twice in PBS for 10 min. Endogenous peroxidases were inactivated by immersing the sections in 3% hydrogen peroxide for 10 min, washed with distilled water and PBS for 15 min, blocked with 100 mL/L normal goat serum for 10 min to reduce the non-specific binding, and incubated with monoclonal mouse anti-human Bcl-2, Bax antibodies (1:200) at 4 °C overnight. After incubation, the cells on coverslips were incubated with biotinylated anti-mouse IgG at 37 °C for 10 min, rinsed twice in PBS for 15 min, and then incubated in streptavidin-peroxidase at 37 °C for 10 min. The chromogenic reaction was developed with diaminobenzidine (DAB). Negative controls were incubated in the absence of primary antibodies.

RESULTS
Effects of HMBA on growth of SMMC-7721 cells

To address whether HMBA affected the growth of hepatocellular carcinoma cells, SMMC-7721 cells were treated with different concentrations of HMBA and then examined by MTT dye reduction assay. As is shown in Table 1, HMBA significantly inhibited the growth of hepatocellular carcinoma cells at concentrations of 5.0, 7.5, 10.0 and 12.5 mmol/L, and the growth inhibitory rate on SMMC-7721 cells at the 72 h was 51.1%, 62.6%, 68.7% and 73.9%, respectively (P < 0.05).

To elucidate the mechanism by which HMBA induces apoptotic cell death of SMMC-7721 cells, we analyzed the expression of two critical apoptosis-associated proteins, Bcl-2 and Bax, which are known to regulate the cell death/survival in opposite manners. As is shown in Figure 3, Bcl-2 protein level was significantly decreased while Bax protein level was slightly increased in the cells treated with 10 mmol/L of HMBA for 72 h. This result suggested that HMBA could induce apoptosis of SMMC-7721 cells by down-regulating the ratio of Bcl-2 to Bax. 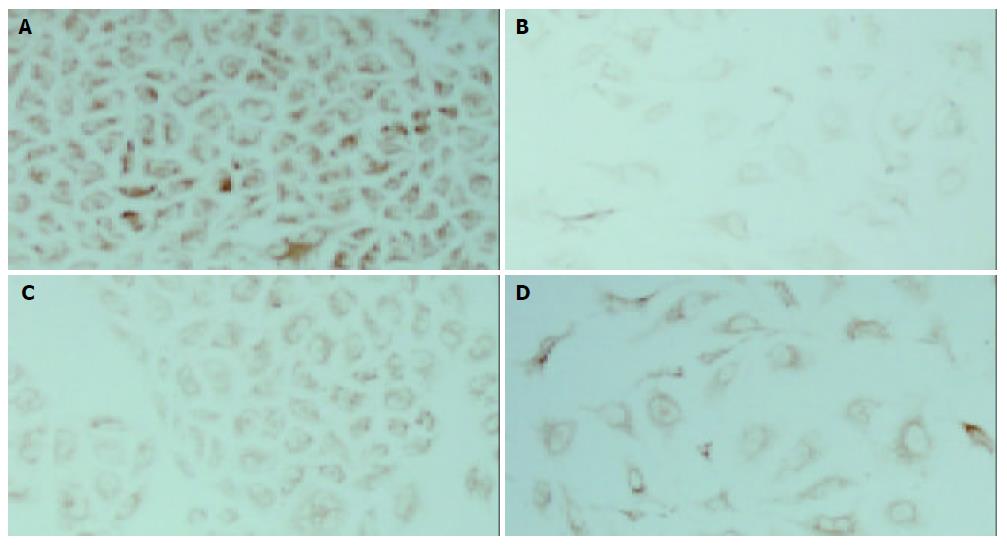 In the present study, we investigated the cellular effects of HMBA on the growth and apoptosis of human hepatocellular carcinoma SMMC-7721 cells. Our data demonstrated that HMBA could effectively inhibit the growth of SMMC-7721 cells in a dose- and time-dependent manner. A significant portion of the cells treated with 10 mmol/L of HMBA for 72 h displayed the classical hallmarks of apoptosis with typical condensed nuclei and apoptotic bodies. In addition, as was shown in the previous reports[13,14], HMBA at 5 mmol/L concentration could arrest most of SMMC-7721 cells in G0/G1 phase and induce differentiation but not apoptosis. Our present results indicated that HMBA at 10 mmol/L concentration could not only inhibit cell proliferation and induce cell terminal differentiation, but also significantly induce apoptosis in human hepatocellular carcinoma SMMC-7721 cells.

To investigate the mechanism by which HMBA induces cellular apoptosis, we studied the effects of HMBA on apoptotic regulatory proteins in SMMC-7721 cells. Numerous molecular entities have been shown to regulate the apoptosis. Among these, the Bcl-2 family of proteins is well known for its regulatory role during apoptosis, and the interaction between anti-apoptotic and pro-apoptotic members of the family, such as between Bcl-2 and Bax, seemed to be crucial for regulation of this process[31-33]. Bcl-2, originally described as a proto-oncogene, is known as a cell death inhibitor that is regulated by its interaction with pro-apoptotic factors such as Bax family. Bax, one of the pro-apoptotic proteins, could counteract the anti-apoptotic effects of Bcl-2 by forming a heterodimer with Bcl-2[34]. In fact, the ratio of Bcl-2 to Bax, rather than the levels of individual proteins, has been considered to be critical in determining the survival or death of cells[35-38]. A number of studies have revealed that apoptosis induced by many agents is mediated through a decrease of the Bcl-2/Bax ratio[39-43]. Our results also showed that HMBA could reduce the ratio of Bcl-2 to Bax, indicating that the decreased ratio of Bcl-2 to Bax caused by HMBA treatment might trigger apoptosis of SMMC-7721 cells.