AIM: To investigate effects of pioglitazone on rat hepatic fibrosis and to explore its mechanism.

METHODS: Rat hepatic fibrosis was induced by carbon tetrachloride (CCl4). Forty Sprague-Dawley rats were divided randomly into 4 groups: control, model, and two treatment (PI, PII) groups. Except for rats in control group, all rats were given subcutaneous injection of 400 mL/L CCl4, twice a wk for 8 wk. Rats in PI and PII groups were also treated with pioglitazone of 3 mg/kg, daily via gastrogavage beginning on the 1st day and at the end of the 2nd week, administration of CCl4 respectively. Liver functions (ALT, AST), serum fibrotic markers (HA, LN, PCIII) and hepatic hydroxyproline (HP) concentration were determined respectively. Histochemical staining of formalin-fixed liver sections with HE, Masson-Trichrome, and immunohistochemical staining for α-smooth muscle actin (α-SMA) were performed. Modified Knodell and Chevallier semi-quantitative scoring system (SSS) was used to evaluate necroinflammatory activity and fibrosis degree.

Hepatic fibrosis is a common response to chronic liver injury of variable origins (e.g. viral, alcoholic, metabolic), which can lead to cirrhosis and ultimately, endstage liver failure and increased risk for hepatocellular carcinoma[1-3]. It seems to be irreversible once liver cirrhosis has been developed[4]. Therefore therapeutic intervention in the progression of hepatic fibrosis in the early stage plays an important role in the prevention of liver cirrhosis. However, until now no satisfactory antifibrotic agent is available.

Peroxisome proliferator-activated receptors (PPARs) are the members of a nuclear receptor superfamily, three isotypes of which have been identified: α, β (also called δ and NUC1) and γ. PPARγ plays a pivotal role in the differentiation of adipocyte and metabolism of glucose and fatty acid[5]. Some studies showed that PPARγ is implicated in inducing differentiation or apoptosis of various human malignant cells [6]. Agonists of PPARγ include 15-deoxy-△ [12,14]-PGJ2 (15 d- PGJ2) and thiazolidinediones (TZDs), such as troglitazone, rosiglitazone, and pioglitazone, etc. TZDs are synthetic compounds with a high affinity to PPARγ and a new class of oral antidiabetic drugs that act by improving insulin sensitivity. Rosiglitazone and pioglitazone have no obvious adverse effects and have been used in clinic[7-10]. Recently, pioglitazone was reported to be able to prevent early-phase hepatic fibrogenesis induced by carbon tetrachloride (CCl4) for 72 h[11]. Galli A et al[12] also demonstrated that oral administration of TZD (rosiglitazone and pioglitazone) can reduce extracellular matrix (ECM) deposition in both toxic and cholestatic models of liver fibosis. In the present study, we investigated the effects of pioglitazone on rat hepatic fibrosis induced by CCl4, and explored its mechanism.

Forty adult male Sprague-Dawley rats, weighing 200-250 g, were purchased from Experimental Animal Department of Xiangya Medical School, Zhongnan University, Hunan Province. Rats were randomly divided into 4 groups including normal control, model and two treatment (PI, PII) groups. Except for control group, all rats were given subcutaneous injection of 400 mL/L CCl4 (dissolved in castor oil) 3 mL/kg twice weekly for 8 wk, with the first dosage doubled. The control group received injection of castor oil vehicle of the same dosage twice weekly. Rats in PI and PII groups were also given pioglitazone (Beijing Taiyang Pharm. Co., Ltd.) of 3 mg/kg daily via gastrogavage beginning on the 1st day and at the end of the 2nd week, administration of CCl4 respectively. Once per week, the animals were weighed and the dosages of CCl4 and pioglitazone were adjusted. At the end of the 8-wk experimental period, all rats were sacrificed by bleeding from femoral arteries and veins. Blood and livers were collected for further examinations.

Liver tissues were fixed in 40 g/L formaldehyde, embedded in paraffin and stained with hematoxylin-eosin (HE) and Masson’s trichrome. Modified Knodell and Chevallier semi-quantitative scoring system (SSS)[13] was used to evaluate necroinflammatory activity and fibrosis degree by an independent pathologist blindly.

Liver tissue sections were deparaffinized in xylene and rehydrated in alcohol gradually. Then the sections were incubated with a primary monoclonal mouse anti-α-SMA antibody (Boster, Wuhan, China) and a secondary biotin-conjugated goat anti-mouse IgG respectively. The positive stains were shown as a brown colour with a SABC technique.

Data were presented as mean ± SD unless otherwise indicated. One-way analysis of variance (ANOVA) with LSD post-hoc comparison was used to test for differences in means of variables between groups. A P value < 0.05 was considered statistically significant. All data were analyzed by SPSS10.0 software.

At the end of the experiment, 2 rats in model group were dead because of infection at the site of injection, another 2 developed ascites. In treatment groups, no death or ascites occurred.

Control livers showed normal lobular architecture with central veins and radiating hepatic cords with irregular sinusoids, and a normal distribution of collagen with a variable amount in portal tracts and a thin rim around central veins (Figure 1). Livers in model group showed disorderly hepatocyte cords, severe fatty degeneration, spotty or focal necrosis and infiltration of inflammatory cells (Figure 2A), and collagen deposition extending from central veins or portal tracts, with thick or thin fibrotic septa and even pseudolobuli formation (Figure 2B). Treatment with pioglitazone in PI, PII groups resulted in apparent amelioration of hepatocyte degeneration, necrosis and infiltration of inflammatory cells (Figure 3), and marked reduction in collagen deposition with no obvious pseudolobuli formation (Figure 4). Scores of liver necroinflammation and fibrosis are shown in Table 1. 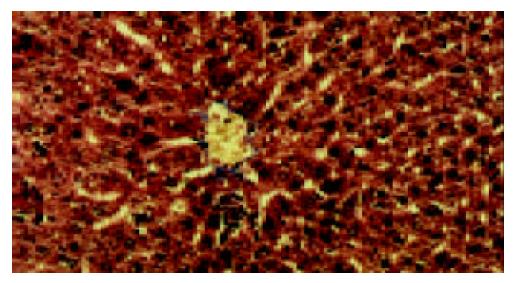 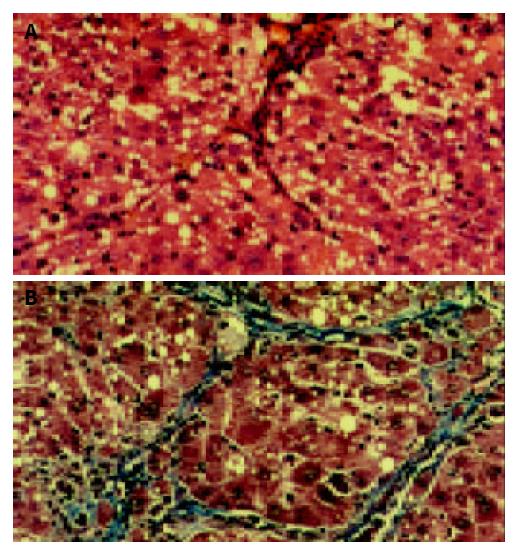 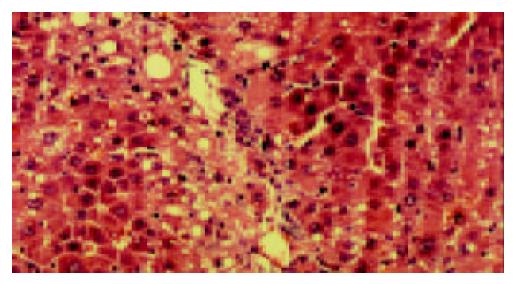 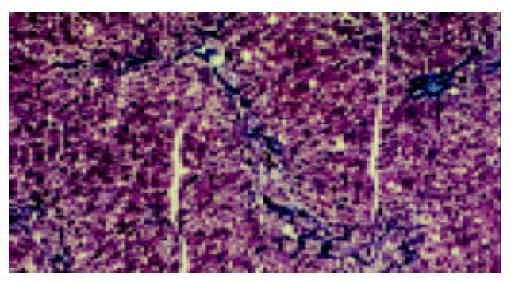 α-SMA is a marker of hepatic stellate cells (HSC) activation. In control livers, α-SMA was mainly expressed in vascular walls; but in model group, apart from vascular walls, α-SMA was strongly expressed in areas of centrilobular and periportal fibrotic bands. Compared with model group, treatment with pioglitazone dramatically reduced the expression of α-SMA in the livers. Besides the expression in vascular walls as in control group, there were only few mesenchymal cells expressing α-SMA around blood vessels in treatment groups.

Hepatic fibrosis is a reparative response to various chronic liver damage and activated hepatic stellate cells (HSCs) play a pivotal role in its pathogenesis[14]. An abundance of evidence indicated that inhibition of HSCs activation may delay or reverse the progression of hepatic fibrosis[15-17]. Recently, HSCs were reported to express PPARγ which might be important in control of their activation state. Inhibition or inactivation of PPARγ in HSCs may predispose to hepatic fibrosis. Miyahara et al[18] reported that PPARγ mRNA level and its binding to PPAR-responsive element (PPRE) are reduced in HSCs from cholestatic liver fibrosis rats. Treatment of cultured-activated HSC with ligands for PPARγ (15dPGJ2 or BRL49653) inhibits DNA synthesis. Transfection experiments with a reporter gene ([PPRE]3-tk-luciferase) also demonstrated a progressive reduction of PPAR transcriptional activity during plastic-induced HSC transdifferentiation. But cotransfection with human PPARγ expression vector restored the reporter gene expression and inhibited cell proliferation in a dose-dependent manner in cultured HSCs[19]. PPARγ agonists also can inhibit HSC proliferation and chemotaxis induced by platelet-derived growth factors (PDGF), the effects of which are associated with inhibition of cell cycle progression beyond the G1 phase[19,20]. A latest study reported that curcumin, a potent antioxidant, inhibits proliferation of activated HSCs in cultures, which is involved in its induction of PPAR-gamma activation[21]. HSCs are the main sources of excessive ECM production and deposition[22]. Apart from inhibiting HSC proliferation and activation, PPARγ ligands can inhibit collagen or fibronectin synthesis induced by transforming growth factor (TGF)-β1 in HSC[12,18]. Our experiments showed that α-SMA expression, a marker of activated HSC[23], was reduced significantly in pioglitazone treatment groups compared with model group. The results demonstrated that pioglitazone could inhibit HSC proliferation and activation. Treatment with pioglitazone also resulted in significant decrease in levels of serum fibrotic markers and hepatic HP concentrations compared with model group. The antifibrotic effects were further confirmed by Masson’s trichrome collagen staining, which showed that collagen deposition of liver tissues in treatment groups was markedly reduced as compared with model group and was associated with lower scores of fibrosis. Our results demonstrated that pioglitazone could also reduce ECM deposition in hepatic fibrosis rats induced by CCl4. In PII group, pioglitazone was administered beginning at the end of the 2nd week of model establishment, at which time main microscopic changes in livers were hepatocellular degeneration, necrosis and slight collagen deposition[24]. Studies showed that HSCs are activated and proliferate stably at the end of the 2nd week of model establishment[25]. Our experiments found that pioglitazone administered beginning at that time could also inhibit the activated HSC proliferation and prevent the progression of hepatic fibrosis in rats.

Hepatic fibrogenesis is often associated with hepatocellular necrosis and inflammation accompanied by repair processes[26,27]. Kupffer cells were shown to be a critical mediator of the inflammatory and fibrogenic responses during CCl4-mediated liver damages[28]. Treatment with GdCl3 or glycine that inactivated Kupffer cells, resulted in attenuation of CCl4-induced hepatic fibrosis[29], which proves that suppression of necroinflammation may be an effective antifibrotic treatment. Many studies showed that PPARγ plays regulatory roles in inflammation and immunity[30-32]. PPARγ ligands can inhibit the activation of inflammatory response genes by antagonizing the AP-1, NF-kB and STAT signaling pathways[33] and reduce proinflammatory cytokines (TNF-α, IL-1, IL-6, etc.) in various cell types (eg. macrophages)[34]. Anti-inflammatory activities of some NSAIDs are associated with inhibition of cytokines production through PPARγ activation[34]. There are increasing reports suggesting that PPARγ ligands can be used for treatment of chronic inflammatory diseases such as inflammatory bowel disease[35], rheumatoid arthritis[36] etc. Our experiments showed that treatment with pioglitazone in PI, PII groups ameliorated hepatocyte degeneration, necrosis and infiltration of inflammatory cells and reduced the scores of necroinflammation significantly compared with model group. Liver functions (ALT, AST) were also improved apparently. These results demonstrated that PPARγ agonists also had anti-inflammatory effects, and subsequently retarded the progression of hepatic fibrosis in rats.

Thiazolidinediones are a new class of oral antidiabetic agents that sensitize insulin action and have no risk of hypoglycemic occurrence[37]. Currently two TZDs, rosiglitazone and pioglitazone, have been approved by U.S. Food and Drug Administration (FDA) for treatment of type 2 diabetes. A wealth of clinical studies indicated that rosiglitazone and pioglitazone have no hepatotoxicity[7-10]. Our experiments also showed that after administration with pioglitazone for 6 or 8 wk, no rats were observed to have hepatotoxicity; moreover, their liver functions (ALT, AST) were improved greatly compared with model rats.

In conclusion, pioglitazone, a PPARγ ligand, greatly retards the progression of experimental hepatic fibrosis through inhibition of HSC activation and amelioration of hepatocyte necroinflammation in rats. Therefore, it is a potential new antifibrotic drug for clinical application.

We are indebted to Prof. Zhou Xiu-tian from Department of Pathology, Nanhua University for his help with the pathological technique.