METHODS: A human gallbladder cancer cell line, GBC-SD, was cultured in vitro. The antiproliferative effects of octreotide were examined by means of an MTT assay and a colony forming ability assay. Morphological variation was investigated under scanning electron microscopy and transmission electron microscopy. Cell cycle analysis and apoptosis rate was evaluated by flow cytometry (FCM) after staining by propidium iodide. DNA fragmentation was assayed by agarose gel electrophoresis. Immunohistochemical staining was performed to evaluate the expressions of mutant-type p53 and bcl-2.

RESULTS: The growth curve and colony forming ability assay showed significant inhibition of octreotide to the proliferation of GBC-SD cells in culture in a time- and dose-dependent manner. After exposure to octreotide, GBC-SD cells showed typically apoptotic characteristics, including morphological changes of chromatin condensation, vacuolar degeneration, nucleus fragmentation and apoptotic body formation. In FCM profile apoptotic cells showed increased sub-G1 peaks in the octreotide group, significantly higher than the control group (P = 0.013). There was also an augmentation in the cell proportion of G0/G1 phase (P = 0.015), while the proportion of S phase and G2/M phase remained unchanged (P = 0.057 and P = 0.280, respectively). DNA agarose gel electrophoresis displayed a ladder after exposure to 1 000 nmol/L octreotide. After being treated with octreotide, the expressions of both mutant-type p53 and bcl-2 decreased considering the percentage of positive cells (P < 0.05).

CONCLUSION: Octreotide has a negative action to the proliferation of GBC-SD cells, and the mechanism may be related to cytostatic and cytotoxic effects. The reduction of mutant-type p53 and bcl-2 expressions may be associated with the apoptosis induced by octreotide.

Gallbladder cancer is the commonest tumor of the biliary system[1]. Because of the absence of characteristic early symptoms, the majority of cases are diagnosed at a late stage when most patients already have occult or overt metastasis. As most gallbladder cancers are unresectable, the prognosis is dismal with the median survival time hardly exceeding 6-mo and 5-yr survival less than 5%. Due to the limited efficacy and considerable toxicity of conventional chemotherapy, novel cytotoxic agents and innovative noncytotoxic approaches are being developed. Amongst the various agents, our attention was being directed to somatostatin. Somatostatin and its analogs (SSTA) such as octreotide[2] inhibit tumor cell growth in vitro and in vivo[3,4]. Their effects are mediated by a family of G-protein-coupled receptors (SSTR1-5) that can couple to diverse signal transduction pathways such as inhibition of adenylate cyclase and guanylate cyclase, modulation of ionic conductance channels, and protein dephosphorylation. There are both ‘direct’ mechanisms that are sequellae of binding of SSTA to somatostatin receptors present on neoplastic cells and ‘indirect’ mechanisms related to effects of SSTA on the host[3] including antiangiogenetic effect[5] and inhibited secretion of tumor trophic factors or hormones such as insulin-like growth factor[6]. Various tumors are inhibited by octreotide, but little is known about whether octreotide has any antineoplastic effects on human gallbladder cancers[7].

MTT assay Equal numbers of cells were seeded into 96-well tissue culture plates. One day later, the cells were treated at different concentrations of octreotide. Cell viability was determined in 5 wells for each drug concentration using MMT assay 12, 24, 36, 48, 60 h later. Optical density was measured at 570 and 630 nm using a microplate reader. Growth curve was made according to the optical density.

Colony-forming ability after drug exposure Aliquots of about 1 000 dispersed cells were seeded into Petri dishes in triplicates and treated with octreotide of different concentrations 24 h later. Colonies consisting of more than 50 cells were scored and the colony-forming rate was compared with that of untreated controls six days later.

Agarose gel electrophoresis of DNA Cells treated with octreotide at 1 000 nmol/L for 72 h were collected, and DNA was extracted and analyzed in 10 g/L agarose gel for 1.5 h. After being stained with ethidium bromide solution for 10 to 15 min, the gel was viewed on a long wave UV transilluminator.

Flow cytometry assay (FCM) The cells subjected to treatment with octreotide were harvested, rinsed with PBS, resuspended and fixed in 700 mL/L ethanol at 4 °C overnight. The fixed cells were centrifuged, resuspended in 100 mg/L RNase A at 37 °C for 30 min and stained with PI at 4 °C for 30 min. FACS flow cytometer fluorescence intensity was measured by FACScan FCM and the DNA content in cells was analyzed by Modfit software. For each sample, 20 000 cells were measured.

Immunohistochemical analysis GBC-SD cells treated with octreotide for 24 h on coverslips were fixed with cold acetone for 5 min, rinsed in PBS for 5 min. Immunohistochemical staining proceeded according to kit instructions. Blank control, negative control (PBS substituting for primary antibodies) and positive control (parafin section of human gastric cancer) were set up at the same time. Cells from at least 10 randomly selected fields ( × 400) were counted. The percentage of positive cells was calculated as (Number of positive cells/Total number in the same visual field) × 100%.

Data were analyzed employing the paired two-tailed Student t test and nonparameter analysis, and significance was assumed at P < 0.05.

RESULTS
Effects of octreotide on the proliferation of GBC-SD cells 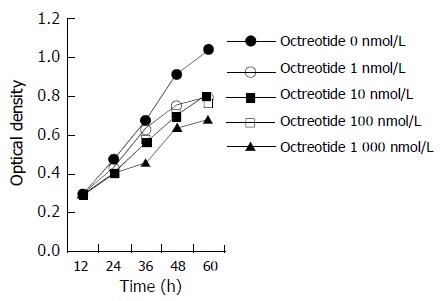 After exposure to octreotide, some GBC-SD cells showed typically apoptotic morphology, including chromatin condensation, vacuolar degeneration, nucleus fragmentation and formation of apoptotic body, which could be seen under SEM and TEM (Figure 2 and Figure 3). 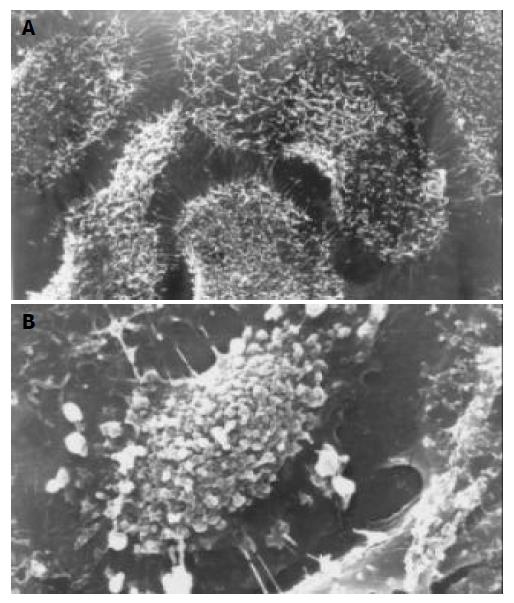 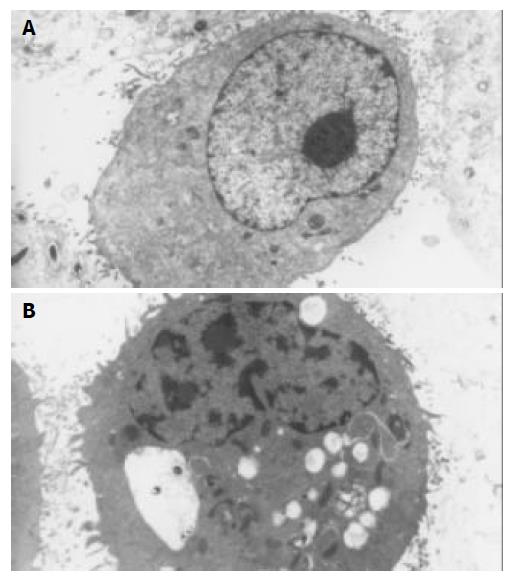 DNA of cells undergoing apoptosis usually displays a ladder in agarose gel electrophoresis. In the present study, a DNA ladder was characteristically identified in cells treated with 1 000 nmol/L of octreotide for 72 h as shown in Figure 4.

Usually, a reduced content in apoptotic cells under PI staining displays a ‘sub-G1’ peak in FCM profile and apoptotic cells can be quantified in this way. As demonstrated in Table 2, GBC-SD cells exposed to octreotide showed increased sub-G1 peaks, significantly higher than those of the control group (P = 0.013). Compared with the control group, there was also an augmentation in the cell proportion of G0/G1 phase (P = 0.015), while the proportion of S phase and G2/M phase remained unchanged (P = 0.057 and P = 0.280, respectively). This indicated that octreotide could arrest the GBC-SD cells at G0/G1 phase.

After being treated with octreotide, the expressions of both mutant-type p53 and bcl-2 decreased considering the percentage of positive cells (P < 0.05), as demonstrated in Table 3.

Somatostatin and SSTA show antineoplastic activity in a variety of experimental models in vivo and in vitro[3,4]. There is considerable evidence for antineoplastic activity of SSTA for neoplasms of breast, prostate, pancreas, colon, stomach, liver, and other common solid tumors for which current treatments are inadequate[8-18]. Some clinical trials employed octreotide in the treatment of human advanced tumors, showing increased survival, favorable toxicity profiles and improved life quality[19,20]. Recent studies described some aspects of the molecular mechanisms underlying this antineoplastic activity[21]. These researches suggest somatostatin and SSTA as drug candidates in oncology.

Over the past decade, a variety of studies revealed that somatostatin and SSTA mediated their action through both indirect and direct effects[3]. In our in vitro experiments, only direct effect was concerned, including cytostatic and cytotoxic effects.

After exposure to octreotide, FCM demonstrated an increased number of GBC-SD cells at G0/G1 phase. In cholangiocarcinoma cells, the G0/G1 cycle arrest was also induced[22]. This effect was attributed to the inhibition of signal transduction of some tumor trophic factors or hormones such as insulin and epidermal growth factor, which initiated tyrosine kinase pathway, activated the kinase cascade, increased the expression of cyclin, and promoted the cell cycle from G1 to S phase[23]. Some researches found octreotide activated SSTR on the membrane, down-regulated cyclin and up-regulated cyclin-dependent kinase inhibitor, thus leading to the inhibition of the mitogenic signal initiated by tyrosine kinase receptor family. Researchers reported specific phosphotyrosine phosphotases were required for maintaining high inhibitory levels of cyclin-dependent kinase inhibitor p27Kip1 and inactivating complex of cyclin E and cyclin dependent kinase 2[23-26]. Another research reported octreotide-induced growth arrest was mediated by inhibition of phosphatidylinositol 3-kinase pathway and by enhanced expressions of p21Cip and p27Kip1 [27].

A variety of findings indicated that apoptosis could be induced in cancer cells by octreotide, which was implicated in its antineoplastic mechanism[8,28]. In GBC-SD, spontaneous apoptosis was observed, showing an apoptosis rate varying from 0.21% to 0.69% in the control group and apoptosis could be induced by octreotide, displaying typical morphological changes, DNA ladder, and elevated sub-G1 peaks in FCM profiles. Octreotide-inducing apoptosis was reported to be associated with tyrosine proteinphosphotase pathway, intracellular acidification, activation of endonuclease and modulation of some genes such as wide-type p53, bax and bcl-2[28-31]. Sharma et al[29] reported only SSTR3 mediated apoptosis, depending on the expression of wide-type p53. Recent studies demonstrated SSTR2 mediated apoptosis in human pancreatic cancer cells and HL60 cells expressing mutated p53[32,33]. These results indicate that somatostatin can induce apoptosis by p53-dependent and p53-independent mechanisms[26].

Two main signaling pathways initiate the apoptotic program in mammalian cells. The cell-extrinsic pathway triggers apoptosis in response to activation by their respective ligand of the tumor necrosis factor (TNF) family of death receptors, while the cell-intrinsic pathway triggers apoptosis in response to DNA damage, loss of survival factors, or other types of cell distress. Guillermet and colleagues reported SSTR2 affected both pathways[32].

In conclusion, we demonstrate that octreotide could inhibit proliferation in vitro in human gallbladder cancer cells, and speculate that cycle arrest and apoptotic induction might be involved in the mechanism.