METHODS: Establishment of continuous hypothermic machine perfusion model, detection of nucleotides in hepatocytes with HPLC, measurement of activities of LDH and AST in the perfusate, observation of histopathological changes in different experiment groups, and autoradiography were carried out to reveal the underlying mechanism of the protective effect of ATP.

RESULTS: The intracellular levels of ATP and EC decreased rapidly after hypothermic preservation in control group, while a higher ATP and EC level, and a slower decreasing rate were observed when ATP-MgCl2 was added to the perfusate (P < 0.01). As compared with the control group, the activities of LDH and AST in the ATP-MgCl2 group were lower (P < 0.05). Furthermore, more severe hepatocyte damage and neutrophil infiltration were observed in the control group. Radioactive [α-32P] ATP entered the hypothermically preserved rat hepatocytes.

Improving the quality of cold stored organs and prolonging the effective preservation time are the pivotal contents in the investigation of hypothermic preservation of transplant grafts. Several investigators have reported that the intracellular level of adenosine triphosphate (ATP) in cold stored organs was closely correlated with the viability of transplant grafts[1-3]. Bowers reported that ATP level in cold stored pretransplant organs was a sensitive parameter for examining the activities of cold stored organs[4]. Therefore, providing direct energy substrate ATP to cold stored organs[5], should be a simple and effective method to sustain the high level of intracellular ATP. However, thus far, whether exogenous ATP could enter cells or not is controversial[6-9]. Furthermore, there were few reports which elucidated the protective effect of ATP on cold stored transplant grafts. In this study, a continuously hypothermic machine perfusion model of rat liver was applied to reveal the protective effect of ATP on cold stored rat livers and its mechanism.

Cold storage study on rat livers The rats mentioned above were divided into 3 groups at random, group A (containing neither ATP nor MgCl2 in the perfusate), group B (containing 5 mmol/L ATP but no MgCl2 in the perfusate), group C (containing either ATP or MgCl2 in the perfusate), respectively. There were 6 rats in each group. The rat liver was weighed immediately after resection by the method described previously[10-12], then these grafts were put into the modified Hoffmann perfusate[13] (0-4 °C) for 30 min (Table 1). Finally, the livers were preserved in a hypothermic preservation incubator by continuously hypothermic preservation perfusion model (Figure 1). The perfusate temperature was 6-8 °C[14], perfusion speed was 0.1 mL/(min.g)[14], the total volume of perfusate was 120 mL. 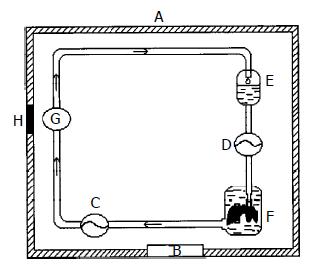 Autoradiography study Six rats were chosen randomly, the livers were resected with the same method. One mCi [α-32P] ATP, 5 mmoL MgCl2, 200 μL and 40 U phenol kinase were added into 1 L perfusate, and the same liver preservation method was applied.

Histological and morphological findings Paraffin sections of HE staining were made after 24 h preservation of the rat livers[19], and observed by a light microscope.

The average values were presented as mean ± SD, t-test was applied and P < 0.05 was considered to be statistically significant.

In group A (Figure 2), the hepatocytes were obviously swollen, cytosol and part of nucleus were faintly stained. Part of the endothelial cells entered the hepatosinus. 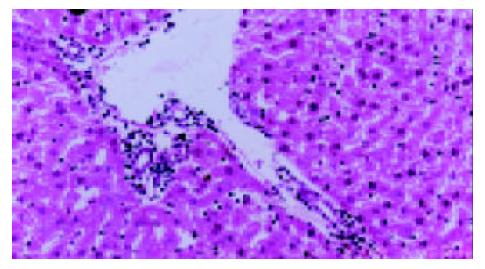 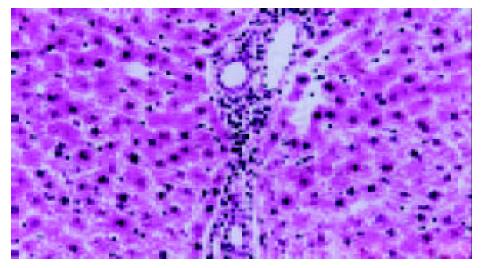 In group C (Figure 4), the hepatocytes were lightly expanded. There was no apparent bubble in cytosol, and the morphology of nucleus was normal. The endothelial cells of hepatosinus were continuous. 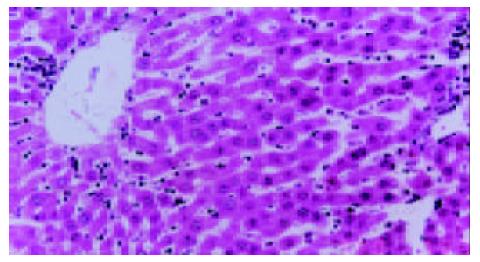 Up to now, some reports have revealed that ATP-MgCl2 had a protective effect on the therapy of hemorrhagic shock[7,21], but reports revealing the protective effect of ATP-MgCl2 on hypothermically preserved transplant organs were few[22]. The results of this study demonstrated that the intracellular level of ATP in the group containing no ATP-MgCl2 or the group containing ATP alone decreased rapidly after hypothermic preservation. Simultaneously, the release of intracellular enzymes was increased, indicating severe damages of the membrane functions. Moreover, significant swelling of the hypatocytes and obvious infiltration of neutrophils were found histologically. On the contrary, the intracellular ATP level in the group containing ATP-MgCl2 was almost maintained at the normal level for quite a long time, and decreased much slower after hypothermic preservation. Furthermore, because of the protective effect of ATP on cell membranes[23,24], the metabolic function of hepatocytes was restored, and the release of intracellular enzymes (LDH and AST) was significantly inhibited. The histological observations also showed that the swelling of hepatocytes was milder than that in groups B and C. These results suggested that ATP-MgCl2 could directly provide the energy or energy substrates for intracellular Na+-K+ ATPase as well as Ca2+-ATPase to remain the extracellular and intracellular ion balance[25-29], and lighten the intracellular acidosis and cell swelling[21,23]. In addition, ATP-MgCl2 also had effects on the amelioration of microcirculation, restoration of membrane voltage, restoration of normal membrane permeability and improvement of cellular functions[30,31].

Together, ATP showed protective effects on cold stored rat livers, and it might be a synthetical effect of multiple actions.

If ATP-MgCl2 protected the cold stored rat livers through vascular expansion, then addition of ATP alone to the perfusate should also exhibit a protective effect. But no protective effect was observed by the addition of ATP alone in our study (Data not shown). Moreover, addition of MgCl2 alone to the perfusate also showed no protective effect[21]. Addition of ADP-MgCl2 complex, which has a more effective action of vascular expansion, showed no protective effect as ATP-MgCl2 (Data not shown). An even more important finding was that, ATP-MgCl2 could enter cold stored rat liver cells in our study. This also directly confirmed that exogenous ATP-MgCl2 could protect cold stored rat livers through the intracellular mechanism. By our knowledge, no report has revealed that exogenous ATP could enter hepatocytes through the membrane, and the mechanism is still unclear. We suspect that the possible pathway might be considered as followings. First, as ATP is a large biomolecule, the membrane is impermeable to it under normal status. But the permeability is increased to ATP due to the activation of some membrane carrier proteins by hypothermia and anoxia. Second, ATP enters hepatocytes through the disrupted hepatocyte membrane. In addition, how does ATP play the protective effect after entering the cells is still poorly understood.

Taken together, these results indicate that exogenous ATP-MgCl2 could protect cold stored livers through an intracellular rather than an extracellular mechanism.

As we know, ATP could form chelate with other extracellular bivalent cations (Ca2+, Sr2+, Mg2+, etc.). However, addition of ATP-MgCl2 complex could inhibit the dephosphorylation and deamino action of ATP, suppress the extracellular hydrolysis of ATP, and prevent the different dynamic effects by interaction of ATP and other extracellular cations[32]. The other possible reason may be that participation of Mg2+ may be required while ATP goes through the cell membrane. The carrier protein has been found on the intima of mitochondria. The functional mechanism was found to be: ATP-Mg2+out + HPO42-in < = > ATP-Mg2+in + HPO42-out[33]. Further investigation is needed to confirm whether there is such a carrier protein on the outside membrane of hepatocytes or not, and whether ATP enters hepatocytes by interaction with Mg2+ or not. In addition, there is also the possibility that, as a co-factor of many intracellular functions, Mg2+ could participate in a diverse of ATP dependent intracellular actions, such as Na+-K+ ATPase, Ca2+-ATPase, and glycolysis[34].

In summary, the results of the current study suggest that exogenous ATP could protect cold stored rat livers by entering hepatocytes. ATP-MgCl2 should be a pivotal component in the hypothermic preservation solution. Further study is required to clarify the protective mechanism of ATP on cold stored organs, which may contribute to the development of hypothermic preservation solution.