METHODS: Sixty-four patients (ethanol group) and 33 patients (Gelfoam group) with HCC and APS were respectively treated with ethanol and Gelfoam for APS before the routine interventional treatment for the tumor. Frequency of recanalization of shunt, complete occlusion of the shunt, side effects, complications, and survival rates were analyzed between the two groups.

CONCLUSION: Ethanol embolization for patients with HCC and severe APS is efficacious and safe, and may contribute to prolongation of the life span versus Gelfoam embolization.

Hepatocellular carcinoma is frequently associated with arterioportal shunts. Kido and Ngan et al[1,2] reported that APS in HCC occurred in 60%, and Okuda et al[3] reported that severe APS of main or right or left portal veins occurred in 30% of patients with HCC. Severe APS led to life threatening conditions (e.g., esophageal varices, ascites and hepatic encephalopathy) as a result of portal regurgitation or portal hypertension[4-7]. To improve portal hypertension caused by severe APS in patients with HCC, APS needs to be treated. To date, Gelfoam and steel coil are the most commonly used embolic materials[8-10]. However, any long-term effect of embolization of APS with steel coil or Gelfoam on survival have not been proved, although they produced a good short-term effect as reported[8-10]. It has been a hot issue how to choose an ideal embolic material to occlude APS. In this study, we used ethanol as the embolic material to treat the APS before the routine interventional treatment for 64 patients. The purpose of this study was to evaluate the long-term effect of the transcatheter arterial embolization (TAE) of APS with new embolic material in patients with HCC and APS, in comparision with the most commonly used material: Gelfoam.

Among 596 patients with HCC treated with transcatheter arterial chemoembolization (TACE) or transcatheter arterial infusion chemotherapy (TAI) at the 3rd Affiliated Hospital of Sun Yat-sen University from February 1999 to March 2003, 161(27%) patients with severe APS were identified by digital subtraction angiography (DSA). We excluded patients with Child class C disease and patients who underwent the treatment of surgical resection, percutaneous local ethanol injection, microwave coagulation, or systemic chemotherapy throughout the study period. According to the exclusive criteria, 64 of 161 patients were excluded from this study. Ninety-seven patients were enrolled in our study (78 men and 19 women, ranging from 21 to 78 years of age; mean age, 57.9). All the patients were treated with TAI or TACE after undergoing embolization of APS.

Written informed consent was obtained from the patients involved in this study. We divided the patients into 2 groups: ethanol group, in which APS was treated with ethanol for 64 patients from April 2000 to March 2003, and Gelfoam group, in which APS was treated with gelatin sponge particles for 33 patients from February 1999 to March 2000. The clinical characteristics of two therapeutic groups were illustrated in Table 1. Although this was a retrospective nonrandomized study, there were no significant differences between two groups in background factors (Table 1).

Firstly, arteriography of hepatic common artery was performed to visualize the arterial vascularization of the liver and to identify the location, severity and direction of vessels of APS. Secondly, a 3-F microcatheter was superselectively inserted into the dominant artery of APS through a 5-F catheter. The embolic material was injected to occlude APS. All diagnostic studies and treatments of APS were performed during the same procedure.

Gelfoam group: Gelatin sponge particles (size, 1 mm×1 mm× 1 mm) were mixed with contrast media (Iopamilon, Schering, Berlin, Germany) and were injected with 1-mL tuberculin syringe under fluoroscopic monitoring until a slow flow or stasis of APS was demonstrated. Then arteriography was done again to confirm the occlusion of APS. If APS could not be occluded with Gelatin sponge particles (size, 1 mm×1 mm×1 mm) and microcatheter, a 4F Rösch hepatic catheter or 4F cobra catheter would replace the 3-F microcatheter and be inserted into or by the way of the feeding artery of shunt. Then several large pieces of Gelfoam (beyond 1×1×1 mm) were used to occlude the shunt.

All patients were followed up by means of spiral CT scan of liver and laboratory tests such as concentrations of α-fetoprotein, liver function before and after treatment. Change of APS was evaluated with DSA which was performed 1 and 2 mo after initial treatment. Then all patients should be followed up every 2-3 mo. When elevation of tumor markers (α-fetoprotein), persistence of APS or recurrence of tumor were observed, patients were readmitted for angiography and treatment as before.

The cumulative proportional survival rates were calculated according to the Kaplan-Meier method. The starting point was defined as the day of initial treatment. The significance of differences between background clinical characteristics of the patients groups (ethanol and Gelfoam) was assessed with the χ2 test and Student’s t test. The significance of difference in survival rates between patients was evaluated by the generalized Wilcoxon test. Values of P < 0.05 were considered significant.

RESULTS
Results of occlusion of APS 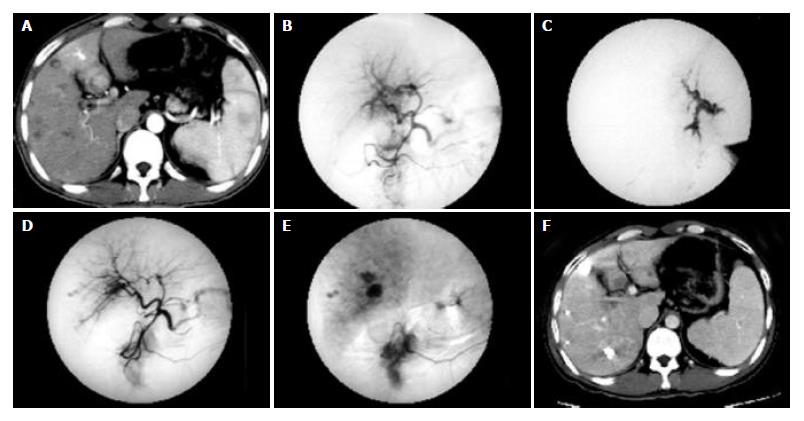 Figure 1 Multiple HCC nodules in a 34-year-old patient. A: CT image obtained during the arterial phase showed the predominant enhancement of the medial segment of left lobe and the enhancement of left portal branches, which represent APS. B: Hepatic arteriogram demonstrated the arterioportal shunt. C: The microcatheter was inserted into the feeding artery of APS. DSA showed the strong or fast blood flow of APS. D-E: Hepatic arteriogram showed that the arterioportal shunt was no longer visible after embolization with a microcoil and ethanol. F: Follow-up CT scan showed lipiodol accumulation in multiple HCC nodules, and liver necrosis was not seen in the distribution of the hepatic artery which had been treated with ethanol.

Figure 2 Cumulative survival curves for patients with HCC and APS in two therapeutic groups are shown. The survival rates for patients in the ethanol group were significantly higher than those in the Gelfoam group (P < 0.05). 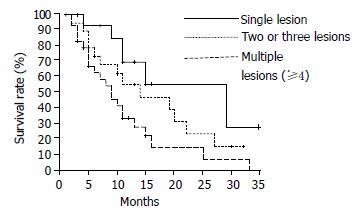 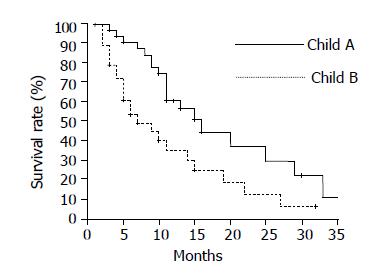 Side effects and complications

Hepatocellular carcinoma is frequently associated with arterioportal shunts. In our series, severe APSs were verified in 27% of patients with HCC by DSA. Severe APS leads to or aggravates portal hypertension which leads to life-threatening conditions such as esophageal varices, refractory ascites, refractory diarrhea and hepatic encephalopathy[4-7,16,17]. Additionally, severe APSs have an influence on the performance of TAI or TACE for the treatment of HCC[18]. The persistence of APS may possibly result in the poor prognosis of HCC. For the reasons as above, severe APS needs to be treated effectively.

Many embolic materials have been used to treat APS in patients with HCC[8,9,19-23]. Of those Gelfoam and steel coil were the most commonly used. Clark[9] and Tarazov[8] reported that Gelfoam and steel coil emboli for the treatment of APS could not prolong the survival of patients with HCC, although they had a good short-term effect on the control of gastric bleeding and ascites. Those effects may be attributable to certain actions of those embolic materials. Firstly, Gelfoam embolization was likely to result in inadvertent embolization, and cause the occlusion of feeding artery of tumor, which would influence the procedure of TAI or TACE for the treatment of tumor. Secondly, the recanalization of APS occurred easily as a result of the development of collateral vessels and the absorption of Gelfoam two to four weeks after embolization. In our study, the recanalization rate of APS was 85.7% 1 month after embolization with Gelfoam. Similarly, the embolization with steel coil also produced the recanalization of APS as a result of the development of collateral anastomoses[8].

Ethanol is a liquid embolic agent that causes immediate vascular sclerosis and occlusion by a combination of direct toxic effect on the vascular wall and clumping of damaged erythrocytes and denatured proteins[24-26]. It has been used widely in the treatment of renal cell carcinoma, esophageal varices, and arteriovenous malformations[24-35]. Similar to the treatment of arteriovenous malformation, injecting ethanol into APS results in clot formation, denudes the endothelium and causes embolization by penetrating into the capillaries. As an embolic material, ethanol is superior to Gelfoam in the treatment of APS. First, ethanol can pass to and occlude the capillaries and veins of shunt, and does not lead to the occlusion of feeding artery of tumor. Thus it produces a more complete occlusion of APS than Gelfoam. Second, ethanol is a kind of long-acting embolic material, and it rarely develops the collateral anastomoses after embolization with ethanol. It has a low recanalization rate of APS. Third, ethanol also has a direct tumoricidal effect. Our results showed the recanalization rate of APS 1 month after embolization with ethanol was 17.8%, and complete occlusion rate was 82.8%, which were better than those of Gelfoam group (P < 0.05).

Furuse et al[10] reported that the survival rate of patients with HCC and APS after steel coil embolization were 45% at 6 mo, 12% at 12 mo, and 6% at 2 yr, and it could not prolong the survival of patient with HCC after the treatment of APS. However, Liu et al[36] reported that the survivals of HCC patients without APS were higher than those of patients with APS. It indicated that the persistence of APS was an important prognostic factor. In our study, the complete occlusion rate of shunt in ethanol group was higher than that in Gelfoam group (P < 0.05). The survival rate of patients in the ethanol group was 78% at 6 mo, 49% at 12 mo, 25% at 24 mo, which were higher than those of Gelfoam group (P < 0.05). Our results suggest that the embolization of APS with ethanol provides a survival advantage over that with gelfoam in patient with HCC. In addition, there was a significant prolongation of survival in patients with monofocal HCC and Child class A in ethanol group (P < 0.05). However, there were no significant differences in survival rates in Gelfoam group with regard to the differences in the number of tumor and Child class (P > 0.05). It was suggested that the survival rate was also related to the stage and invasive extent of tumor, and general state of patients. On the other hand, the persistence of severe APS was the important factor which influenced the survival of patient with HCC and APS.

The most common complication of embolization of APS with ethanol was abdominal pain caused by destruction of the vascular endothelium when ethanol was injected[24,25]. The incidence was 82.8% in our study. It could be alleviated immediately when we stopped injecting ethanol. There was no severe complication related to ethanol embolization. In our study, liver necrosis was not seen in the distribution of the hepatic artery which had been treated with ethanol in the follow-up CT scans. The postembolization syndromes were related to the specific treatment of tumor, and there was no significant difference between the two groups.

In conclusion, ethanol embolization for patients with HCC and severe APS is efficacious and safe, and may contribute to prolongation of the life span versus Gelfoam embolization.

We thank David A. Kumpe, MD, from the Health Sciences Center, University of Colorado Derver, USA, for his assistance in revising the manuscript.