Inflammatory fibroid polyp is one of the chronic inflammatory diseases in the digestive tract, which often mimics the submucosal tumor. Precise diagnosis is possible after removal of the detected lesion. Endoscopic removal is recommended as a safe and efficient method of the treatment. In this report the authors present a case of inflammatory fibroid polyp located in the cardia, which has been removed endoscopically. Twelve months later, recurrence of the lesion was noted and the patient was referred to surgical resection.

Inflammatory fibroid polyp (IFP) in the digestive tract is one of the chronic inflammatory diseases, which most often is located in the stomach. Precise diagnosis of IFP remains difficult because available methods such as barium swallow or even endoscopy with endoscopic ultrasonography (EUS) provide only nonspecific, insufficient information. Some cases of IFP can macroscopically mimic gastric cancer[1,2]. Hence, it is most important to exclude malignancy by histology on the detected lesion. In the case of submucosal lesions, standard biopsies are insufficient in obtaining adequate diagnostic tissue. Then endoscopic tumor excision or polypectomy is recommended. However the curative significance of endoscopic treatment in patients with IFP is still under discussion. We would like to report a rare case of IFP, localized within the esophago-gastric junction, which recurred 12 mo after endoscopic removal.

A 48-year-old male with symptoms of dysphagia for solids and epigastric pain of moderate intensity, lasting for 3 weeks, was admitted to the hospital. No weight loss was noted. The patient had no history of any other diseases including parasites and allergies. No abnormalities were found upon physical examination and laboratory results (hematology, serum biochemistry, urine analysis) were within normal ranges. Gastrofiberoscopy revealed an elevated, round, polypoid tumor, 15 × 20 mm with small ulceration in the center filled with necrotic tissue (Figure 1 , Figure 2). The tumor was located exactly within the esophagogastric junction and significantly reduced the lumen of the cardia. The surface of the lesion was covered with hypertrophic mucosus. On retroflexion, the tumor was entirely within the confines of the stomach, suggesting the possibility of complete endoscopic excision (Figure 3). EUS showed a low echoic but rather homogenous tumor which did not invade the muscular layer. No other pathologies in the upper part of gastrointestinal tract were found. Endoscopic biopsies showed normal mucosa and attention was directed to endoscopic removal. Macroscopically radical endoscopic excision of the tumor, completed with argon plasma coagulation of its basement was performed under general anesthesia, and removed lesion was investigated by pathologists. Histological examination revealed a superficially ulcerated and well-circumscribed but nonencapsulated submucosal tumor, which extended partly into the cardiac mucosa. The tumor was composed of fibrous tissue with abundant small blood vessels and numerous eosinophils admixed with plasma cells and lymphocytes (Figure 4 A, B). The lymphoid aggregates were also occasionally seen within the tumor and in adjacent tissues (Figure 4 B). The inflammatory fibroid polyp was diagnosed. One day after the endoscopic procedure, the patient was discharged from the hospital with no postoperative complications noted. 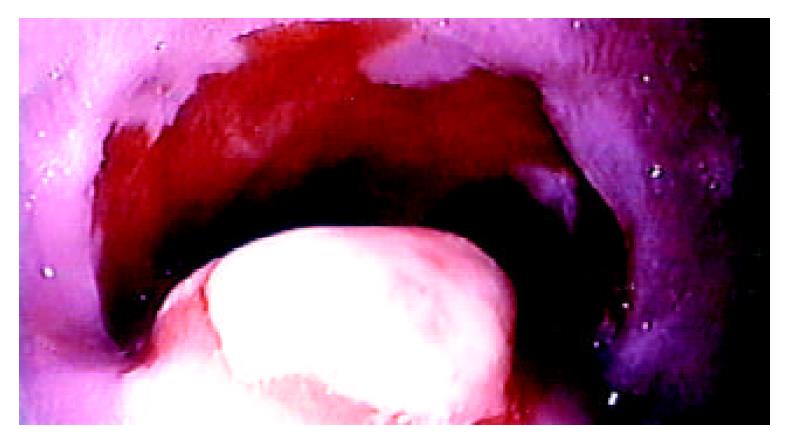 Figure 1 Endoscopic view of inflammatory fibroid polyp (IFP) located in cardia. An elevated, round, polypoid tumor can be seen. 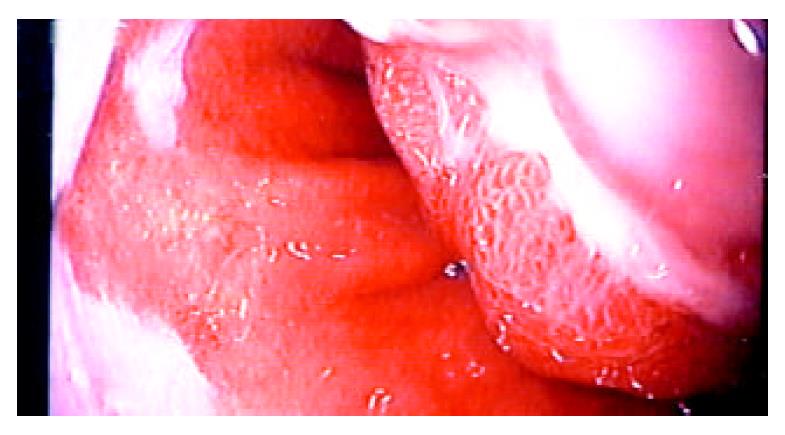 Figure 2 Inflammatory fibroid polyp of cardia. A small ulcer-ation can be seen in the center of the lesion filled with necrotic tissue. 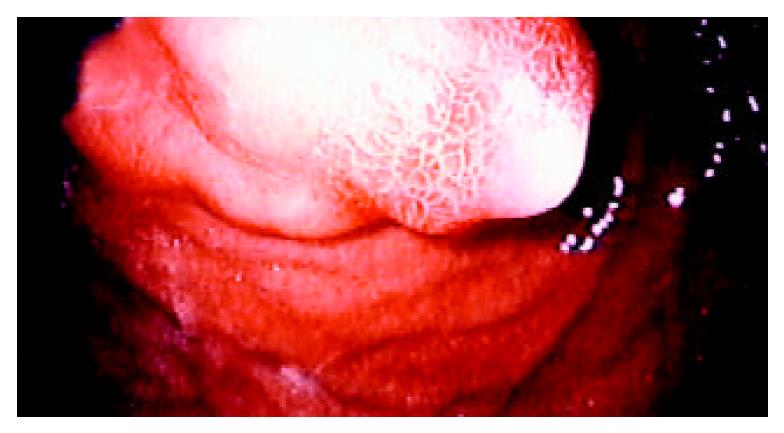 Figure 3 Retroflexion of endoscope. The tumor is indented into the stomach. 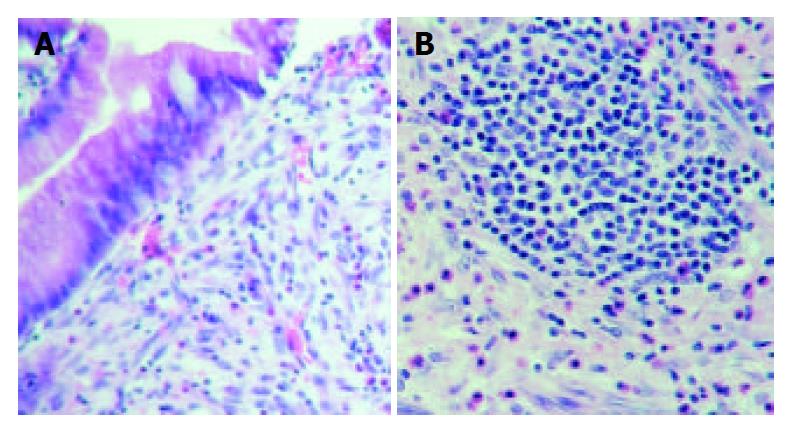 Figure 4 Histologic appearance of primary inflammatory fi-broid polyp of cardia. A superficially ulcerated tumor can be observed involving cardiac mucosa and submucosa, and con-sists of fibrovascular tissue as well as numerous eosinophils admixed with plasma cells and lymphocytes. (HE; A: magn. ×100; B: magn. ×200).

Twelve months after the treatment, the patient was admitted to the hospital with the same symptoms as previously. Gastrofiberoscopy revealed the presence of the tumor in the cardia with an endoscopic appearance mostly as described above. The recurrent tumor was larger, 25 × 39 mm as shown on barium contrast radiography, and was more proximally located. In light of these findings the patient was referred to surgical treatment. Proximal gastrectomy with local lymphadenectomy, via laparotomy and distal esophagectomy via right thoracotomy with esophago-gastrostomy within the posterior mediastine were performed. Histological appearance of the recurrent tumor was identical with the first one. Postoperative course was uneventful and the patient was discharged 15 d after surgery. No significant changes within 4-mo follow-up were observed. Follow-up fiberoscopy performed 3 mo after the surgery showed no pathological signs within the esophago-gastrostomy.

In 1953 Helwig and Rainer proposed the term of inflammatory fibroid polyp for eosinophilic granuloma of the stomach which presently is generally accepted[3]. IFP arises from submucosa of the gastrointestinal tract. It consists of loose connective tissue with a rich vasculature and abundant fibrous component. Usually the lesion was sessile or polypoid with ulceration of the overlying mucosa[4]. IFP was mainly located in the pyloric region of the stomach, less frequent in the ileum, and only occasionally in the colon or esophagus[4-6]. Small lesion is usually asymptomatic until pyloric stenosis or small bowel obstruction occurs. In the case described in the present report, a relatively small IFP was detected due to symptoms of dysphagia. Its localization in the esophago-gastric junction has not been reported previously. Although IFP was nonneoplastic in nature[4,6], its cause remains unclear. Fibroblastic[4] or vascular origin of IFP[7] has been considered. Eosinophilic infiltration which sometimes may occur as a submucosal tumor was also related to parasitic infections such as gastric anisakiasis[8,9].

However, endoscopists should always suspect submucosal mesenchymal tumors of being gastrointestinal stromal tumor (GIST), leiomyoma or leiomyosarcoma especially when tumor macroscopically mimics a malignant lesion. Biopsy specimens using standard forceps may not be adequate for histological diagnosis when tumor is covered with normal mucosa. Then endoscopic excision/polypectomy preceded with EUS should be the best diagnostic method. There were some reports concerning the curative role of endoscopic removal of IFP[10-12]. However, our results indicate the possibility of local recurrence of IFP after endoscopic treatment. Thus we recommend endoscopic removal as the most valuable diagnostic method for providing the specimens to accurate histological assessment. It may be reserved as the curative procedure in elderly and high-risk patients as has been proposed previously[11] and should be repeated if necessary. Elevation of the tumor after submucosal saline or xylocaine injection can be helpful in making decision of endoscopic removal, and may indicate the possibility of complete, radical dissection. In other cases, minimal invasive surgery, i.e. laparoscopic resection, may be considered. To date only a single report has been available about recurrent eosinophilic granuloma of the ileum in a 2-year-old child[13].