AIM: To investigate maspin expression in tumorigenesis and progression of gastric cancer and to explore its relevant molecular mechanisms.

RESULTS: The positive rates of maspin expression were 79.8% (145/182), 75.4% (52/69) and 50.4% (57/113) in normal mucosa, dysplasia and cancer of the stomach, respectively. Cancer less frequently expressed maspin than normal mucosa and dysplasia (P < 0.05). Maspin expression showed a significantly negative association with invasive depth, metastasis, Lauren’s and Nakamura’s classification (P < 0.05), but not with tumor size, Borrmann’s classification, growth pattern or TNM staging (P > 0.05). The positive rate of Caspase-3 was significantly lower in gastric cancer than in normal gastric mucosa (P < 0.05,32.7% vs 50.4%). It was noteworthy that maspin expression was negatively correlated with MVD, but positively correlated with expression of Caspase-3 in gastric cancer (P < 0.05).

Mammary serine protease inhibitor (maspin) was identified by subtractive hybridization as a candidate tumor suppressor protein in normal mammary epithelial cells[1]. Maspin gene maps to human chromosome 18q21.3-q23, whose cDNA consists of 2584 nucleotides encoding for a 42 ku peptide[2]. A number of findings support its inhibitory effects on tumors. Levels of maspin expression showed an inverse correlation with progression of malignancies. Mammary carcinoma cells transfected with maspin showed a reduction of tumor growth and metastasis in nude mice, the addition of recombinant maspin decreased the migration potential of breast and prostate cancer cells across a reconstituted basement membrane. More recently, maspin has been shown to inhibit angiogenesis by blocking in vitro migration of vascular endothelial cells and by in vivo inhibition of rat cornea neovascularization[1-8]. It has been documented that maspin transgene expression in mouse mammary gland inhibited Simian virus 40 (SV40) large T-antigen induced breast carcinogenesis and was correlated with increased apoptosis of mammary gland cells[9].

Normal mucosa (n = 182), dysplasia (n = 69), cancer (n = 113) of the stomach were collected from the Second Affiliated Hospital of China Medical University between Sept. 1996 and Feb. 2002. All tissues were fixed in 40 g/L formaldehyde, embedded in paraffin and incised into 4 μm sections. These sections were stained by hematoxylin-and-eosin method to confirm their histological diagnosis and other microscopic characteristics. All patients did not undergo chemotherapy and radiotherapy before operation.

Representative and consecutive sections were studied with streptavidin-biotin-peroxidase immunohistochemistry (SABC kit from Boster Biotech.). Anti-maspin, anti-Caspase-3 and anti-CD34 antibodies were purchased from Novocastra, Zhongshan (China) and DAKO respectively. All procedures were implemented according to the instructions of the product. For negative controls, sections were processed as above but treated with PBS (0.01 mol/L, pH7.4) instead of primary antibodies.

Evaluation of maspin and Caspase-3 immunostaining

The immunoreactivity to maspin and Caspase-3 was localized in cytoplasms. One hundred cells were selected and counted from 5 representative fields of each section by two independent observers. The positive percentage of counted cells was graded semi-quantitatively into one of the four-tier scoring system: negative (-), 5%; weakly positive (+), 5% - 25%; moderately positive (++), 25% - 50%; and strongly positive (+++), 50%.

CD34 antibodies were distributed in cell membranes and cytoplasms of vascular endothelial cells. Modified Weidner’s method was used to calculate the microvessel density, which was described as follows. Microvessels in tumor were considered as hot points in vessel counts. Any brown staining endothelial cell or endothelial cell cluster was regarded as a single, countable microvessel. Observers selected such five areas and counted individual microvessels at 400× magnification (i.e. 40× objective lens and 10× ocular lens, 0.1885 mm2 per field).

RESULTS
Maspin expression in normal mucosa, dysplasia, and cancer of the stomach

Relationship between maspin and Caspsae-3 expression, MVD in gastric cancer 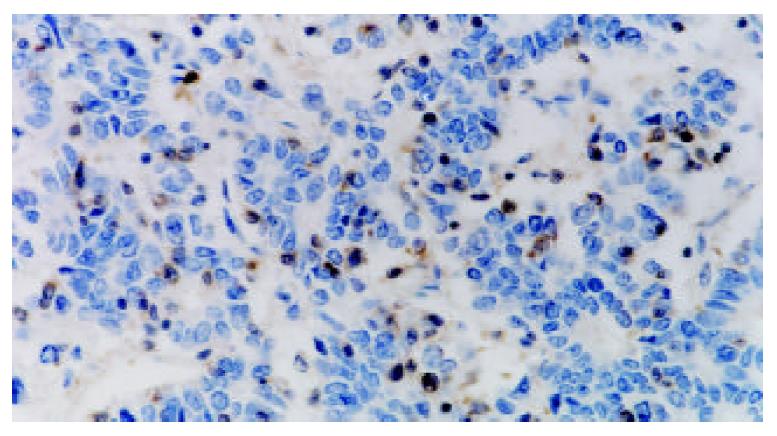 Carcinogenesis and progression of malignancies are a complicated multistage process that requires the coordination of multiple genes, including oncogenes and tumor suppressor genes. Genomic instability is one of the driving forces for tumor development. Among all genetic alterations, inactivation of metastasis suppressor genes has been found to be an important factor because of their contribution to malignant change of normal cells and metastasis of tumor cells[20,21].

It is known that maspin is highly expressed in various kinds of normal cells and lowly expressed in cancer cells. Our data showed that maspin expression was gradually reduced from normal mucosa, through dysplasia to cancer of the stomach. The positive rate of maspin expression was lower in gastric cancer than in normal gastric mucosa and gastric dysplasia with no significant difference in the latter two. These results suggested that reduced maspin expression contributed to malignant change of gastric epithelial cells. The down-regulated expression of maspin could be considered as a late molecular event of gastric carcinogenesis. Previous reports indicated that DNA methylation, histone deacetylation or LOH was partially responsible for the silencing of maspin gene expression[22-24]. Decreased expression of maspin might be attributable to these genetic alterations in gastric carcinogenesis as mentioned above.

Our study showed that maspin expression was negatively associated with invasion and metastasis of tumors, suggesting its inhibitory effects on progression of gastric cancer. Biliran et al[25] found that maspin could specifically inhibit cell surface-associated urokinase-type plasminogen activator and fibrinogen-bound tissue-type plasminogen activator, which was correlated with significantly decreased cell invasion potential and motility in vitro. Blacque et al[26] reported that interaction between recombinant maspin and some collagens might contribute to cell adhesion, cell migration and angiogenesis. Seftor et al[27] demonstrated that maspin was able to regulate integrin expression, indicating that maspin could reduce the invasive phenotype of cancer cells by altering their integrin profile. These findings suggested that maspin expression could inhibit tumor progression in vivo, likely through a combination of increased cell adhesion, decreased angiogenesis, and inhibition of tumor cell migration.

Our study also showed a negative correlation between maspin expression and MVD in gastric cancer. Song et al[28] found that maspin-positive colonic adenocarcinomas showed less MVD than maspin-negative ones. Zhang et al[8] reported that maspin might act directly on vascular endothelial cells to stop their migration towards basic fibroblast growth factor and vascular endothelial growth factor and to limit mitogenesis and tube formation, which could dramatically reduce tumor-associated MVD. These in vivo and in vitro data suggest that the tumor suppressor activity of maspin may depend in large part on its ability to inhibit angiogenesis and raise the possibility that maspin and similar serpins may be excellent targets for the development of drugs that modulate angiogenesis.

Furthermore, it was found that Caspase-3 expression was increased in gastric cancer with maspin positively expressed. Jiang et al[29] reported that endogenous maspin expression could enhance staurosporine-induced apoptosis of carcinoma cells as judged by the increased fragmentation of DNA, increased proteolytic inactivation of poly-[ADP-ribose]-polymerase, as well as the increased activation of Caspase-8 and Caspase-3. Li et al[30] showed that apoptosis induced by manganese-containing superoxide dismutase was associated with elevated maspin expression level. These results indicated that it was possible that maspin expression might inhibit progression of gastric cancer by inducing apoptosis.