METHODS: The 33P labeled cDNAs were synthesized by reverse transcription of message RNA from the liver cancerous tissue and adjacent non-cancerous liver tissue from the same patient and used to hybridize to LifeGrid 1.0 cDNA microarray blot containing 8400 known and unique human cDNA gene targets, and an expression profile of genes was produced in one paired human liver tumor tissue. After a global analysis of gene expression of 8400 genes, we selected some genes to confirm the differential expression using Northern blot and RT-PCR.

RESULTS: Parallel analysis of the hybridized signals enabled us to get an expression profile of genes in which about 500 genes were differentially expressed in the paired liver tumor tissues. We identified 4 genes, the expression of three (Beclin 1, RbAp48 and Pir51) were increased and one (aldolase b) was decreased in liver tumor tissues. In addition, the expression of these genes in 6 hepatoma cell lines was also showed by RT-PCR analysis.

CONCLUSION: cDNA microarray permits a high throughput identification of changes in gene expression. The genes encoding Beclin 1, RbAp48, Pir51 and aldolase b are first reported that may be related with hepatocarcinoma.

Hepatocellular carcinoma (HCC), an aggressive malignancy with poor prognosis and one of the most common tumors in human beings, has become a leading cause of cancer-related death in adults from Asia and sub-Saharan-Africa[1]. The multiple pathogenic factors, including food contamination with aflatoxin B1 and infection with hepatitic B virus and hepatitic C virus and the subsequent multistage pathogenesis of HCC have been extensively studied. In addition, tumor suppressor genes, such as Rb and p53[2], may play a significant role in hepatocarcinogenesis. However it is not clear how these disorders result in HCC. Recent advances in molecular genetics have identified various genetic abnormalities in tumors. However, little is known about the genetic alterations responsible for specific phenotypes of HCC.

With the advent of cDNA microarray technology, genome-wide expression of hundreds of genes can be simultaneously analyzed, facilitating differential expression monitoring of a large number of activated or suppressed genes under various biological conditions, including carcinogenesis[3-5], drug discovery and development[6]. With cDNA microarrays, it is now possible to perform a large-scale expression survey to identify candidate target genes[7]. Efforts to classify human HCC based on gene expression profile using cDNA microarray have been successfully processed in recent year[8-12]. Shirota et al[8] found that 10 genes were up-regulated and 9 genes were down-regulated in > 50% HCC and identified the changes of 22 genes associated with the degree of differentiation of HCC. Kawai et al[10] showed that AFP-producing hepatoma cell lines shared a distinct expression profile of genes in various categories compared with those of AFP-negative hepatoma cell lines and non-hepatotic cancer cell lines. Xu et al[12] identified that 156 genes were down-regulated and up-regulated in > 50% of cancer samples of HCC. So much work has focused on HCC expression profile, however the data are still far less.

Total RNA was extracted with TRIZOL reagent (Life Technologies, Inc., N.Y., USA). Tissue samples were homogenized in 1ml of TRIZOL reagent per 50-100 mg of tissue and incubated for 5 min at room temperature, then 200 μl chloroform was added and mixed vigorously and incubated at room temperature for 2-3 min. After centrifugation at 12000 rpm for 15 min at 4 °C, the aqueous phase was transferred to a fresh tube, mixed with an equal volume of isopropanol, and incubated at room temperature for 10 min. Total RNA was collected and washed in 75% ethanol. Total RNA was run on a denaturing formaldehyde agarose gel to check quality. Poly A+ RNA was isolated using the oligotex mRNA mini kit (Qiagen, Hilden, Germany) according to the manufacture’s instructions. Two hundred micrograms of total RNA was routinely used for mRNA isolation.

Gene expression was analyzed using the Human Life Grid 1.0 array (Incyte Genomics Inc. California, USA). Approximately 8400 human PCR products chosen from Incyte Genomics’s library of proprietary clones were girded onto a 12 × 22 cm nylon membrane in a double-spotted pattern at a density of approximately 16800 spots and 27 controls. 33P-labeled cDNA probe was generated by reverse transcription of 1 μg of each analyzed polyA+ RNA sample in the presence of α-33P dCTP and the percent label incorporation was not less than 40%. Each cDNA probe was then hybridized to a microarray. Overnight incubation was followed by stringent washing as recommended by the manual. Membranes were exposed to phosphor screen overnight. The data were analyzed by Incyte Genomics.

All probes were obtained by amplification of gene fragments by PCR under conditions listed in Table 1. For conventional Northern blot analysis, 15 μg total RNA was fractionated by electrophoresis through 1% agarose gel containing formaldehyde and blotted in 20 × SSC onto Hybond-N+ nylon membrane (Amersham Pharmacia Biotech, Ltd. Buckinghamshire, UK) by capillary force overnight. The blotted RNA was immobilized by incubating at 80 °C for 1 h. Hybridization was performed at 68 °C in ExpressHyb hybridization buffer (CLONTECH Inc., California, USA) for 3 h. Membranes were washed once in 2 × SSC, 0.1% SDS at room temperature, twice in 0.1 × SSC, 0.1% SDS at 68 °C for 20 min and exposed to X-ray film (Eastman Kodak Co., Rochester MA) at -80 °C for 1-6 d. Three μg total RNA was reverse transcribed in 20 μl reaction mixture with SuperscripTM II (Life Technologies Inc., NY., USA). The PCR cycle number at the linear phase of amplification was chosen to compare differential gene expression among different genes. 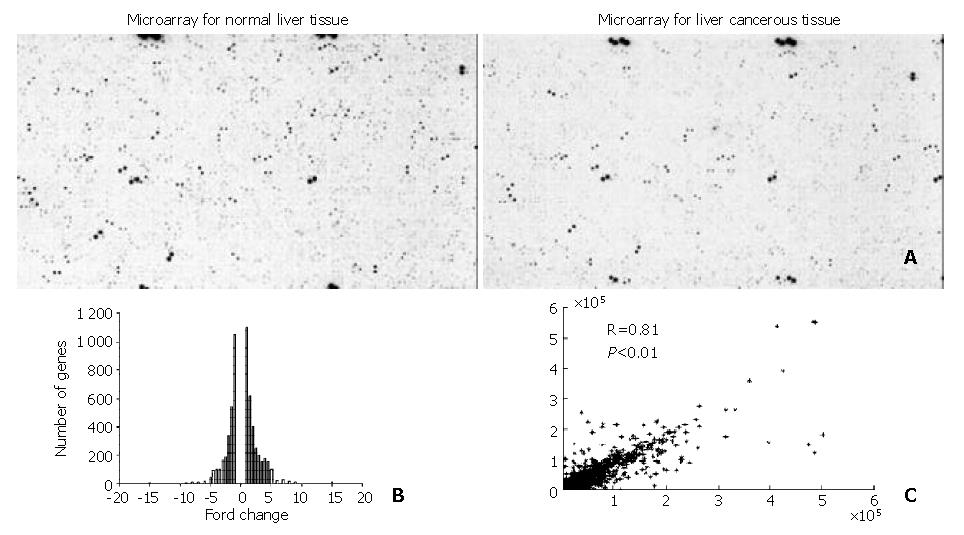 Among the 6542 genes expressed in paired liver tumor tissue, 256 genes were up-regulated and 267 genes were down-regulated, which were greater or less than 4 fold in liver tumor tissue. Known functioning genes differentially expressed (> 4 fold) in HCC were classified into six functional categories with respect to selected functional properties of their products. The six categories were included in cell division; cell, organism defense; metabolic enzymes, transporters ion channels; nuclear proteins; cell structure, extracellular matrix; cell signaling, communication. The numbers of classified genes are shown in Table 2. The group of ‘other genes’ summarized individual genes that could not be included in any of the above categories.

To verify the data, we then performed Northern blot analysis and RT-PCR analysis. Only genes with expression levels that were altered by > 4 fold between normal and tumor tissues were selected. These analyses were carried out with a total 10 paired HCC samples. We identified 4 genes that were differential expression in > 50% paired samples. Three genes were up-regulated and one was down-regulated. Northern blot analysis of Beclin 1 and RbAp48 mRNA showed a significantly increased expression level in 50% paired tumor samples (Figure 2), which could not be detected in normal liver tissues. Northern blot analysis of aldolase b mRNA showed a significantly decreased expression level in 70% paired tumor samples. Northern blotting signal of Pir51 was difficult to obtain, the semi-quantitative RT-PCR carried out in the linear detection range was used to estimate the relative amount of mRNA. Pir51 mRNA was up-regulated by RT-PCR analysis in 60% paired tumor samples (Figure 2). 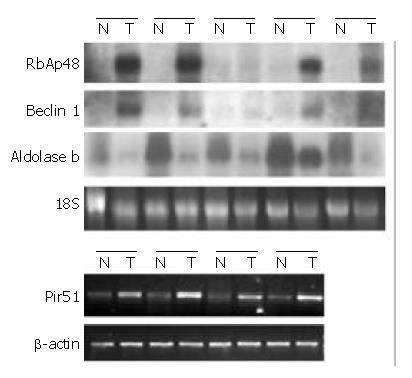 In contrast we investigated the expression of Beclin 1, RbAp48, Pir51 and aldolase b in one hepato (L02) and 5 hepatoma cells lines by RT-PCR analysis. RbAp48 was detected in L02, Bel-7404, HepG2, Bel-7402 and HuH7, was undetectable in SMMC-7721. Beclin 1 was detected in L02, SMMC-7721, Bel-7404, and HepG2, was weak or undetectable in Bel-7402 and HuH7. Pir51 was expressed in all of hepatoma cell lines detected excluding HuH7. The data also showed that only HepG2 cells, most of cells had not, had a weak expression of aldolase b, (Figure 3). These results from cells coincided with that from tissues (Figure 2). The data of 4 genes obtained from microarray and Northern bolt or RT-PCR are summarized in Table 3. The fold changes of the 4 genes by Northern blot analysis were significantly consistent with cDNA microarray. 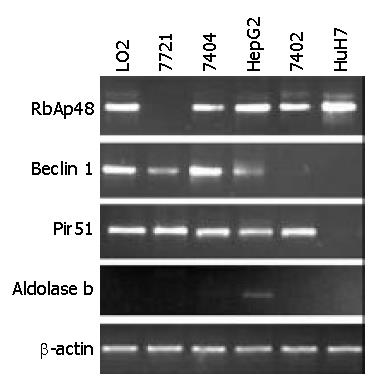 In this study, we used cDNA microarray to identify the genes that may play roles in hepatocarcinogenesis. We demonstrated up- or down-regulated genes in liver cancerous tissues commonly found in patients, and compared them with those in adjacent normal tissues. Then we selected several differentially displayed genes for further verification by Northern blots or RT-PCR. Four genes (Beclin 1, RbAp48, Pir51 and aldolase b) were confirmed to have a differential expression pattern in normal and cancerous liver tissues. The low percentage appeared to be the heterogeneity of tumors[12]. The genes identified through this approach are potential candidates for factors implicated in carcinogenesis, and are useful in both cancer diagnosis and HCC therapy.

Beclin 1 has been found to be a novel Bcl-2-interacting cellular protein which was mono-allelically deleted in 40% - 75% of sporadic human breast cancers and ovarian cancers[13], and also a mammalian autophagy gene that could inhibit tumorigenesis and could be expressed at decreased levels in human breast carcinoma[14]. It has been considered as a tumor suppressor gene in breast cancer[14,15]. However, our results showed that the expression of Beclin 1 mRNA was increased in liver tumor tissues and HCC cell lines and could not be detected in normal liver tissues. Beclin 1 has an unknown function in HCC. Overexpression of Beclin 1 in neurons in vivo could inhibit Sindbis virus replication, reduce central nervous system (CNS) apoptosis, and provide protection against fatal Sindbis virus infection, which might play a role in host defense against Sindbis virus infection[16]. 80% of HCC patients were infected with HBV or HCV, increased expression of Beclin 1 might be induced by the infection of virus. The enhanced expression of Beclin 1 in HCC provided us important information to further determine its new biological role.

RbAp48 was isolated as an Rb binding protein[17]. RbAp48 was found to be one of the three subunits of chromatin assembly factor 1[18,19] and components of histone deacetylase complexes[20,21]. RbAp48 could also interact with a complex of CREB binding protein and phosphorylated CREB[22]. RbAp48 was physically associated in the presence of Rb and HDAC1, suggesting that RbAp48 could be involved in transcription repression of E2F responsive genes[23]. Binding of RbAp48 correlated with the ability of Rb to block cell proliferation[17,24]. Furthermore, the C. elegans homologues of both Rb and RbAp48 were recently cloned as two proteins that belong to the same Ras-inhibitory way[25]. However, the mechanisms by which RbAp48 gene product regulated tumor growth are largely unknown. RbAp48 mRNA was also shown to increase in HCC tissues. Although the biological significance of this finding needs further study, our results showed that altered expression of RbAp48 gene might be related to HCC development.

Aldolase B, fructose-biphosphate Aldolase, an important enzyme for glucose and fructose metabolism, is a liver-specific gene. Some hepatic genes, for instance, albumin, ornitin transcarbamylase and transthyretin, were down-regulated in carcinogenesis of hepatocytes[26,27]. This down-regulation was mainly attributed to the diminishing of some of liver-enriched transcription factors (LETF). Kovalenko et al[28] reported AlF-C1 enriched in fetal and regenerating livers, and down-regulated the aldolase B gene promoter in rat hepatoma cells. In our results, aldolase B was down-regulated in HCC samples and HCC cell lines, which may reflect the function change of liver cancer from metabolism to proliferation.

Pir51 protein could strongly interact with human Rad51 recombinase[29]. Eukaryotic Rad51 protein has been reported to play a central role in homologous recombination by carrying out the pairing of homologous DNA molecules and initiating the strand exchange reaction[30,31] and mammalian Rad51 was essential for cell proliferation. Rad51 activity is regulated by its associated proteins. Pir51 protein could bind to both single and double stranded DNA and was capable of aggregating DNA[29]. However, functional significance of biochemical properties of pir51 is unclear.

In conclusion, our data demonstrate that profiling of HCC samples can help reveal genes that are commonly expressed in HCC. Information from these studies may be useful in the development of therapeutic drugs for liver cancer.