METHODS: Expressions of NF-κB/p65 and its target genes: c-myc, cyclinD1 and bcl-xl were immunohistochemically examined in 289 cases of gastric biopsy and resection specimens from patients with IM, DYS and GC infected with H pylori. H pylori in the above mentioned tissues was detected by Warthin-Starry stain and rapid urease tests. IgG antibody to cagA in sera of the patients was measured by ELISA.

NF-κB is a sequence-specific transcription factor known to be involved in inflammatory and immune responses. A wide variety of genes regulated by NF-κB includes those encoding cytokines, antimicrobial peptides, adhesion molecules[14]. Recently, it has been found that NF-κB contributes to the activation of genes encoding regulators of anti-apoptosis and cell proliferation. Hence, the role of NF-κB in tumorigenesis has attracted increasing attention. It is well documented that cagA of H pylori can activate NF-κB and H pylori cagA infection often causes chronic atrophic gastritis accompanied by intestinal metaplasia and dysplasia. NF-κB is not only involved in inflammatory responses but also related to carcinogenesis[15-18]. We deduce that NF-κB may be an important link between these two processes. This study was to investigate the possible association between H pylori cagA infection and the expression of NF-κB/p65 and its target genes in GC. Warthin-Starry staining and rapid urease tests were performed to detect H pylori. ELISA was employed to measure IgG antibody to cagA. HID/AB/PAS staining method was used to distinguish sulphates, neutral and acid mucin. Immunohistochemical techniques were employed to determine the expression of NF-κB/p65 and its target genes in specimens of IM, DYS, and GC.

A total of 289 cases were recruited from patients suffering from gastritis who underwent endoscopic examination and biopsy and from gastric cancer patients received surgical resections from 2001 to 2002 at Zhongnan Hospital, Wuhan. Among the 289 cases, 179 were male and 110 were female. The average age was 48.5 years (range, 19-75 years). From each patient four samples were taken from gastric antrum and corpus, respectively. Rapid urease tests were done first. Patients who obtained positive results had their blood samples taken, which were stored at -20 °Cuntil ELISA assay. No patients had received chemotherapy or radiation therapy before surgery. Samples were fixed in 10% neutrally buffered formalin for histological, histochemical and immunohistochemical studies.

For histological evaluation, formalin-fixed tissues were embedded in paraffin, cut into 4 μm thick sections and stained with H&E. GC was histologically divided into early stage and advanced stage, with or without lymph node metastasis, intestinal type and diffuse type[19].

Intestinal metaplasia was classified into three sub-types according to both morphological and histochemical criteria. Dysplasia was divided into three grades[20-21].

The presence of serum anti-cagA IgG antibody was tested with commercial enzyme-linked immunosorbent assay (ELISA) kits (Jing Ying Biotechnology Company, Shanghai). Briefly, a recombinant protein fragment of cagA, a purified form of Escherichia coli cell lysates, was used as an antigen and fixed to a 96-well plate in carbonate-bicarbonate buffer. After incubation of treated wells with serum diluted 1:100, alkaline phosphatase-conjugated goat anti-human IgG was added. After addition of phosphatase substrate, absorbance was read at 405 nm. Based on the results from H pylori-negative controls, a value of ≥ 0.18 was considered to be positive of IgG antibodies. 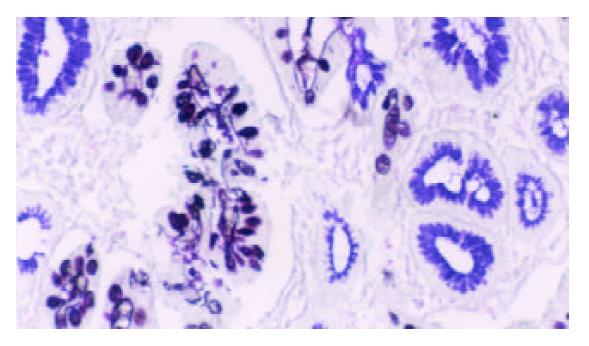 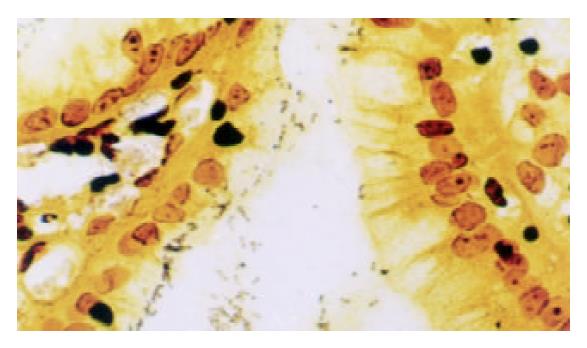 Serial 4 μm thick sections were made and mounted on poly L-lysine coated slides. Paraffin sections were immersed in xylene for 5 minutes and hydrated using a gradient series of alcohol. Antigen retrieval was routinely performed by immersing the sections in citric acid buffer (pH6.0), in a microwave oven for 15 min. Endogenous peroxidase activity was blocked with 3% hydrogen peroxide for 10 min and then incubated with a primary antibody in a humidified chamber at 4 °Covernight. Primary antibody was monoclonal mouse anti-NF-κB/p65 antibody (Santa Cruze) at 1:200 dilution. Monoclonal mouse anti-cyclinD1, c-myc antibody (Maixin Biotechnology Company), monoclonal mouse anti-bcl-xl antibody (Beijing Zhongsheng Biotechnology Company) and ultrasensitive SP kit were obtained from the above-mentioned two companies. Sections were counterstained for 5 min with Delafield’s haematoxylin and then mounted. Human colon cancer having infiltration of lymphatic cells with intense staining for NF-κB, c-myc, cyclinD1, bcl-xl was used as a positive control. As a negative control, PBS was used instead of primary antibodies. Expressions of NF-κB, c-myc, cyclinD1, bcl-xl in carcinoma cells, metaplastic and dysplastic epithelia were evaluated according to the ratio of positive cells and defined as negative (0% - 9%) and positive (10% - 100%). Positive cells of NF-κB/p65 mainly showed a plasmatic staining (Figure 3). Positive cells of c-myc, cyclin D1 showed nuclear and plasmatic staining and bcl-xl showed a plasmatic staining (Figure 3).

Differences among groups were evaluated by using Chi-square test and Fisher’s exact test. Differences were considered to be statistically significant at P < 0.05. 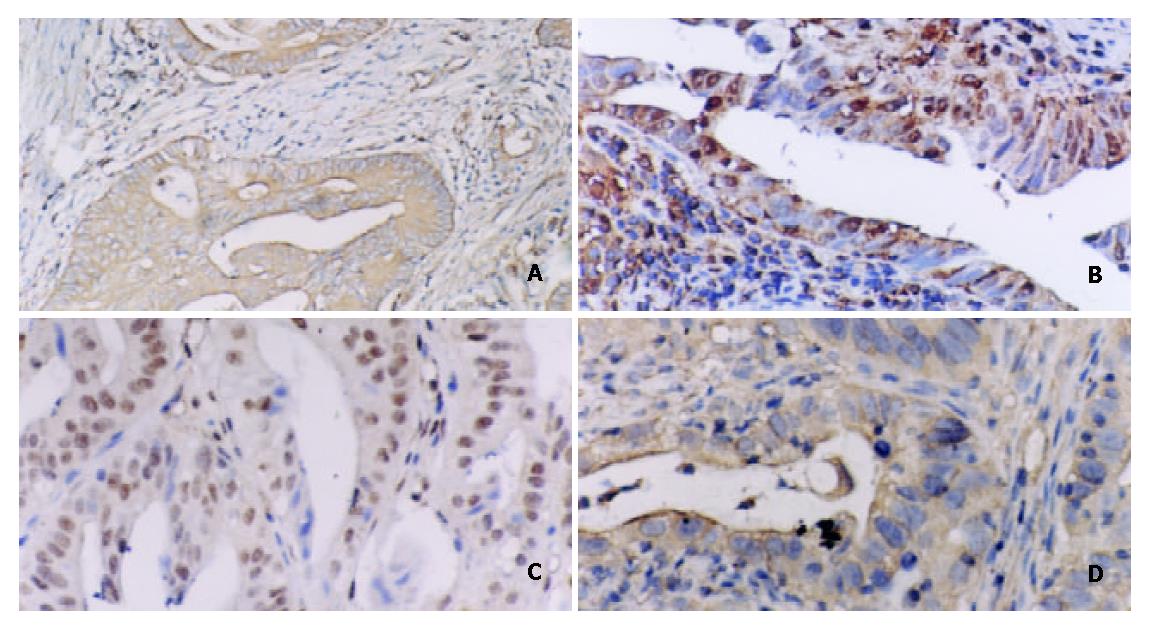 We also observed the expression of NF-κB/p65, c-myc, cyclinD1 in inflammatory cells of gastric lamina propria and stroma, and 5.6% nuclear staining of NF-κB/p65 was in the groups with H pylori cagA in the tissues of IM, DYS and GC.

NF-κB was first identified as a regulator of expression of the kappa light chain gene in murine B lymphocytes but has subsequently been found in many different cells[14]. NF-κB is made up of protein dimers that bind to a common sequence motif known as the κB site. The activated form of NF-κB is a heterodimer, which usually consists of two proteins: a p65 subunit and a p50 subunit. In unstimulated cells, NF-κB is found in cytoplasm and is bound to IκB, which prevents it from entering nuclei. When cells are stimulated, specific kinase phosphorylate IκB results in IκB’s rapid degradation by proteasomes. The release of NF-κB from IκB would result in passage of NF-κB into nuclei, where it binds to specific sequences in promoter regions of target genes and further activates target genes[24-28].

H pylori cagA is one of the virulent strains of H pylori. Studies have demonstrated that activation of NF-κB by H pylori requires genes in cag PAI (pathogenicity island). CagA protein of H pylori PAI can be translocated into gastric epithelial cells by a type IV secretion system encoded by cagPAI and is tyrosine-phosphorylated. Tyrosine phosphorylated cagA could induce changes in the tyrosine phosphorylation status of distinct cellular proteins and further activate NF-κB[29-32]. In the present study, we found that high expression of NF-κB/p65 was detected in the tissues of H pylori cagA group with metaplasia, dysplasia and gastric carcinoma. We also observed that expression of NF-κB/p65 was mainly localized in cytoplasm. Although nuclear localization of NF-κB was considered as equivalent to NF-κB activation, it showed 5.6% positive rate in H pylori cagA group in our study, which was similar to that of Nakayama et al[33]. Though it seems difficult to determine whether immunohistological detection of a certain protein reflects its dynamic localization, we believe that large amounts of NF-κB/p65 in the cytoplasm of tissues infected with H pylori cagA may be easily activated by cagA of H pylori, even by a slight stimulation of cagA protein. NF-κB/p65 activated by cagA up-regulated the expression of target genes in IM, DYS and GC, and might play an important role in the occurrence and development of gastric carcinoma caused by H pylori cagA infection. As one of the NF-κB target genes[34,35], bcl-xl belongs to the anti-apoptosis gene family and exerts its anti-apoptosis effect by inhibiting the release of apoptosis inducing factors.

Some investigations showed that tumor cells with activated NF-κB were not sensitive to radio and chemotherapeutic agents, while inhibition of NF-κB activity could enhance the radio- and chemosensitivity of cancer treatment[36,37].

Activated NF-κB has also been shown to directly stimulate the transcription of genes that encode c-myc and cyclinD1 because a kB binding site is present within the c-myc, and cyclinD1 promoter[16,38,39,40]. c-myc is known to be a strong inducer of proliferation and is believed to be critical for the oncogenic properties. Studies showed that aberrant c-myc expression was widespread in tumor cells and important for multistep carcinogenesis[41,42]. However, proliferation induced by c-myc requires the concomitant mutant of p53. In gastric precancerous lesions infected with H pylori, mutants of p53 were often confirmed[43,44]. cyclinD1 is a cell cycle regulatory gene. It is essential for G1 phase progression and has been implicated in the pathogenesis of several human malignancies, including gastric carcinoma[45-47].

As evidenced here, high expressions of c-myc, cyclinD1, bcl-xl concomitant with NF-κB/p65 in the tissues of cagA+ of IM III and DYS II-III could drive cells inappropriately through the cell cycle to evade apoptosis, resulting in uncontrolled proliferation characteristic of neoplastic cells. In addition, weak to moderate staining of NF-κB/p65, c-myc, cyclinD1 of inflammatory cells in the stroma of gastric lesions was observed. The above results, taken together, could be explained in two ways. First, H pylori cagA infection led to gastritis, and activated NF-κB. Activated NF-κB could promote inflammatory cells and epithelium of gastritis to produce large amounts of reaction oxygen species (ROS), cyclooxygenase-2 (COX-2), IL-6, and IL-8[48-53]. ROS played an important role in damaging DNA of epithelium of gastric lesions[54,55]. COX-2 could suppress epithelial cell apoptosis leading to cell proliferation. Some studies showed that overexpression of COX-2 had a strong association with gastric carcinoma[56,57]. IL-6, and IL-8 could directly induce proliferation of epithelium[58,59]. Second, cagA of H pylori activated NF-κB in IM III and DYS II-III. Activated NF-κB up-regulated the expression of c-myc, cyclinD1, bcl-xl, and prevented the death of epithelial cells that had undergone chromosomal rearrangements or other types of DNA damage. c-myc, cyclinD1 enhanced the proliferation of epithelial cells with mutant genes, leading to gastric carcinoma. Such cells are normally eliminated by means of checkpoint control, such as the p53 pathway. As previously mentioned, mutated p53 was often found in precancerous lesions of gastritis infected with H pylori cagA. The present study showed that the expression of NF-κB/p65, c-myc, cyclinD1 and bcl-xl was significantly higher in intestinal type carcinoma than in diffuse type carcinoma, suggesting that the occurrence of the two types of gastric adenocarcinomas may have different molecular mechanisms, which is similar to other author’s viewpoint[60,61]. H pylori cagA infection can lead to intestinal type gastric carcinoma which is strongly associated with the up-regulation of c-myc, cyclinD1 and bcl-xl through NF-κB. Moreover, the expression of NF-κB and c-myc was higher in advanced stage than in early stage GC. There was no relationship between stages of gastric adenocarcinoma and expression of c-myc, cyclinD1, while higher expression of c-myc was detected in the group with lymph mode metastasis as compared with the group without. It is concluded that high expression of NF-κB/p65 and its target genes in H pylori cagA group of IM III, DYS II-III and intestinal type GC may play an important role in various stages of H pylori cagA induced intestinal type gastric carcinoma. In GC infected with H pylori cagA, the expression of NF-κB/p65, c-myc is associated with infiltration of gastric carcinoma. Moreover, expression of c-myc is linked with lymph node metastasis of gastric carcinoma.