We present two diagnostically challenging cases of acute pancreatitis with hypertriglyceridemia accompanied with chylomicronemia caused with a deficiency of lipoprotein lipase and with the presence of type V hyperlipidemia. Both cases suffered from acute abdomen following the ingestion of fatty food and revealed the increase in parameters of inflammation without significant elevation of serum amylase levels. The imaging examination of ultrasonography could not detect significant findings of acute pancreatitis and a computer tomography scan eventually confirmed the findings of acute pancreatitis. Both cases responded to a low fat diet and administration of a cholecystokinin receptor antagonist, exhibiting a relief of abdominal symptoms. As in the present cases with acute abdomen following the ingestion of fatty food, the identification of serum hypertriglyceridemia and an abdominal computer tomography scan might be useful in establishing the diagnosis of acute pancreatitis and in developing the therapeutic regimen, when hypertriglyceridemia interferes with the evaluation of pancreatic enzyme activities and ultrasound examination provides poor pancreatic visualization.

A 61-year-old Japanese woman was admitted to the emergency department of a local hospital for repeated episodes of vomiting and epigastric discomfort following the ingestion of fatty food. The white blood cell (WBC) count and serum amylase level were both mildly elevated. Although echosonogram could not detect pancreatic disorders such as hypoechoic change or fluid collections, the treatment with gabexate mesylate, an inhibitor of pancreatic serine proteinases, was initiated with a suspected diagnosis of acute pancreatitis and her epigastric discomfort and nausea improved. She was transferred next day for purposes of further examination of acute abdomen. She had midepigastric discomfort and tenderness that migrated to the back. Bowel sounds were normal to auscultation, and there was no hepatomegaly or splenomegaly. Arcus corneae, cutaneous eruptive xanthomas and the xanthomas of Achilles tendon were absent. A chest radiogram was normal. X-rays of the abdomen revealed no abnormal gas patterns, calcifications, or ascites.

Table 1 illustrates the laboratory data on admission. We observed an elevated WBC count and erythrocyte sedimentation rate (ESR) and a positive C-reactive protein (CRP), with moderate normocytic anemia. Although an elevated serum pancreatic secretory trypsin inhibitor (PSTI) level was revealed in the pancreatic enzymes, other pancreatic enzymes including serum and urinary amylase levels were normal. Marked hypertriglyceridemia and a low level of high density lipoprotein-cholesterol (HDL-C) were apparent. A layer of chylomicrons could be seen at the top of the plasma stored for 24 h in a refrigerator. Although an abdominal ultrasonogram showed no pancreas abnormality and no evidence of cholelithiasis or choledocholithiasis, a computer tomography (CT) scan of the abdomen could detect pancreatic edematous changes and enlargement with a score of 3 according to CT severity index by Balthazar[8]. These findings were confirmed as an initial change of acute pancreatitis by two established radiologists and indicated a diagnosis of secondary pancreatitis with hypertriglyceridemia.

Figure 1 illustrates the patient’s clinical course. Her epigastric discomfort improved after administration of loxiglumide, a cholecystokinin receptor antagonist 300 mg/d, and flomoxef, an antibiotic 2 g/d, and they disappeared after two days. The serum PSTI level returned to normal and there were no major changes in other serum pancreatic enzymes. The patient was started on a low fat diet on the third hospital day. We conducted a diagnostic investigation to exclude possible secondary causes for acute pancreatitis other than hypertriglyceridemia. Endoscopic retrograde cholangiopancreatography (ERCP) performed on the seventh hospital day revealed no apparent structural alterations in the common bile duct or pancreatic duct such as pancreas divisum. Despite the administration of a low fat diet for two weeks, hypertriglyceridemia and low serum level of HDL-C failed to improve dramatically. The serum CRP level returned to normal on the eleventh hospital day. 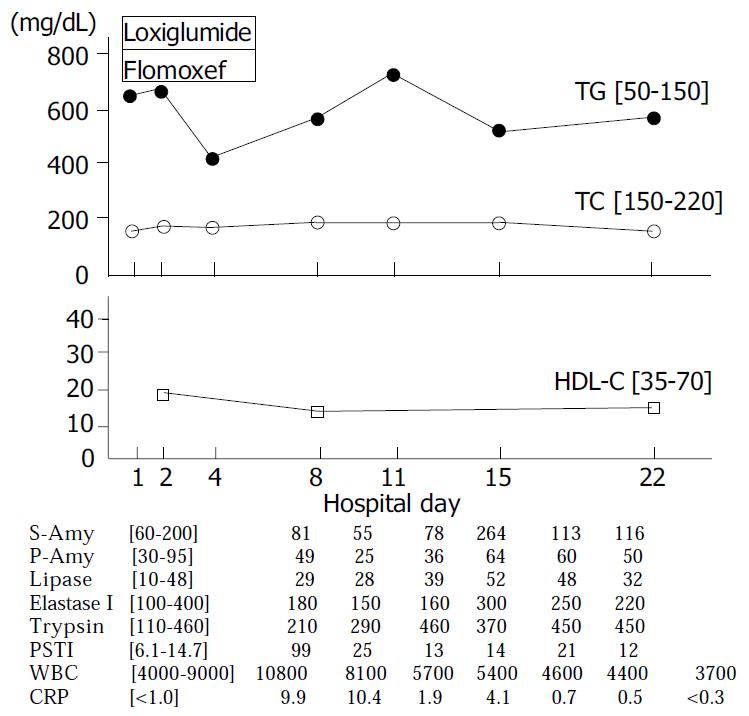 In terms of lipid metabolism, we observed high serum levels of apolipoprotein (Apo) B, CII, CIII and E, indicating the increase in triglyceride-rich lipoprotein (Table 2). Polyacrylamide gel electrophoresis (PAGE) demonstrated the presence of chylomicron fraction at base line and a decreased pre-β, β and α fraction, indicating the presence of chylomicron and low levels of very low density lipoprotein (VLDL), low density lipoprotein (LDL) and HDL, respectively (Figure 2a). The post-heparin plasma lipoprotein lipase (LPL) activity, which was obtained 15 min after 50 U/kg body weight intravenous injection of heparin, was markedly low and the immunoreactive LPL mass was below the level of detection (less than 20 ng/mL), confirming the diagnosis of LPL deficiency. These findings suggested that the fatty food ingestion led to acute pancreatitis in the patient with severe hypertriglyceridemia due to the LPL deficiency.

Figure 2 Polyacrylamide gel electrophoresis using the fasting plasma of (a) case 1, (b) case 2 and (c) control. The presence of chylomicrons is demonstrated at the base line indicated by arrows (↑).
Case 2

This 30-year-old Japanese man was admitted with severe left hypochondralgia following the ingestion of fatty food. He had a history of moderate alcohol intake (more than 80 g/d) since the age of 20 and a history of repeated hospitalizations for acute abdomen following the ingestion of fatty food but the definite cause of acute abdomen was not determined. He was obese, being 169 cm tall and weighing 78 kg, with a body mass index of 27.3 kg/m2. He complained of abdominal pain that radiated to the left back. Abdominal auscultation revealed a decrease in bowel sounds. We observed eruptive xanthomas; small, yellow, papular, cutaneous lesions, localized over the buttocks, the femoral region and the extensor surface of the arms that had been present for the past two months. Chest X-rays showed no abnormalities. No abnormal gas patterns, calcifications, or ascites were noted on abdominal X-rays. An abdominal ultrasonogram provided poor pancreatic visualization due to the obesity. An abdominal CT scan revealed fatty changes in the liver and the presence of edematous and enlarged changes in the pancreas, suggesting acute pancreatitis, with a score of 3 according to CT severity index[8]. These findings were confirmed as initial findings of acute pancreatitis by two established radiologists.

Laboratory data on admission (Table 1) revealed an elevated WBC count and ESR, positive CRP, elevated hemoglobin level and a low concentration of serum sodium. High serum levels of cholesterol and marked high triglyceride level of more than 10000 mg/dL, compatible with type V hyperlipidemia according to the classification of Frederickson[9], and a low serum level of HDL-C were present. Only an elevated serum PSTI level was revealed in pancreatic enzymes.

The patient’s clinical course is illustrated in Figure 3. His pain in the left hypochondrium improved on fasting and administration of loxiglumide, 300 mg/d, and latamoxef, an antibiotic 2 g/d, and disappeared on the tenth hospital day. A low fat diet with 1800 kcal/d was started on the tenth hospital day. Although there was no significant alteration in serum HDL-C levels after the diet was initiated, the markedly elevated serum triglyceride levels fell dramatically and serum cholesterol levels also decreased markedly, returning to normal limits. The WBC count, serum CRP level and serum PSTI level improved significantly. ERCP on the twenty seventh hospital day demonstrated no structural alterations and no stones in the pancreatobiliary ductal system. 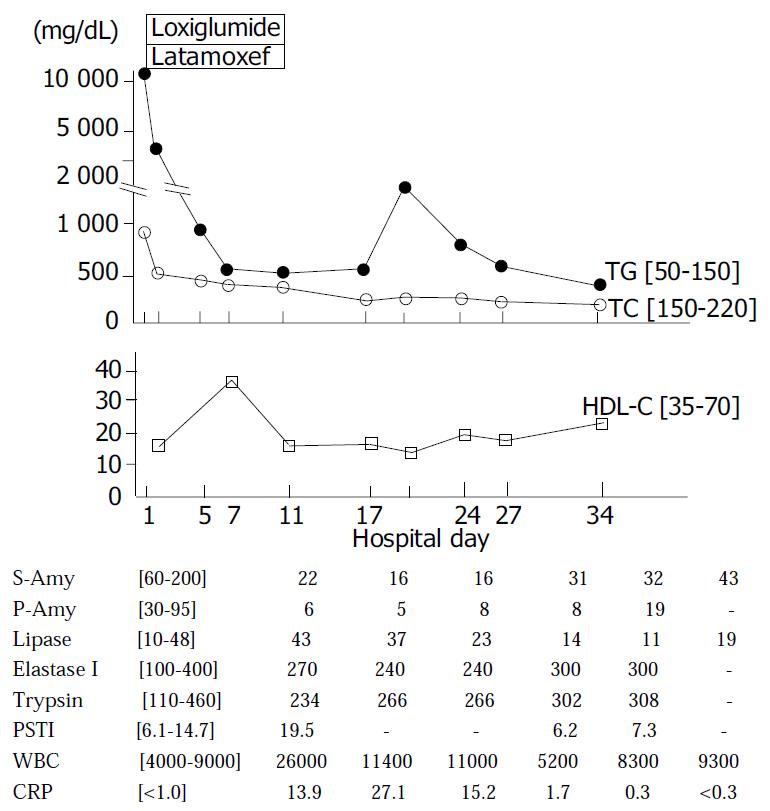 In terms of the lipid metabolism, the presence of chylomicrons was identified from the development of a chylomicrons layer at the top of the patient’s plasma taken on admission and placed overnight at 4 °C in a refrigerator. In addition, PAGE revealed the presence of chylomicrons fraction at base line and an increase in pre-β fraction, indicating an increase in VLDL (Figure 2b). On the thirty fourth hospital day after initiating a low fat diet, we performed a further investigation of the lipid metabolism and 75 g OGTT (Table 2). The 75 g OGTT demonstrated a pattern typical of DM and serum HbA1C was 9.0. Although the serum cholesterol level returned to normal and the serum triglyceride level fell to 251 mg/dL, we observed high serum levels of VLDL-triglyceride, Apo B and Apo CIII, indicating an increase in the hepatic VLDL- triglyceride synthesis. Post-heparin plasma LPL activity was within normal ranges. These findings suggested that ingestion of fatty food could lead to type V hyperlipidemia characterized by the presence of chylomicrons and an increase in VLDL. A low fat diet proved effective in managing this case of massive hypertriglyceridemia.

Hypertriglyceridemia accompanied with chylomicronemia is clinically important because an elevated serum triglyceride level predisposes to the development of pancreatitis, occasionally leading to total pancreatic necrosis and death[1,10,11]. Both cases suffered from acute abdomen following the ingestion of fatty food and revealed high levels of inflammation parameters accompanied with hypertriglyceridemia. In pancreas enzymes, only serum PSTI revealed high levels and no elevation of serum and urinary amylase could be detected. On the imaging examination, an abdominal ultrasonogram could not detect pathological findings of acute pancreatitis and a CT scan eventually confirmed the findings of acute pancreatitis. Their symptoms improved after administration of a pancreatic serine proteinase inhibitor and fasting. The clinical courses supported the diagnostic evidence for acute pancreatitis with hypertriglyceridemia triggered by the ingestion of fatty food.

While pancreatitis is a major complication of hypertrigly-ceridemia, it is difficult to identify the onset of acute pancreatitis exactly from the clinical symptoms and laboratory data, since hypertriglyceridemia may often produce multiple spurious laboratory results[1-5]. Upon examination of patients with pain or discomfort in the abdomen of unknown origin, one should conduct tests to determine the lipid profile as well as the profile of pancreatic enzymes and imaging examination of the abdomen. If patients showed hypertriglyceridemia, it might be practical to measure serum amylase levels using diluted serum or plasma samples[2]. Eruptive xanthomas, shown in case 2, caused by the phagocytosis of chylomicrons by macrophages in the skin[22] may indicate the presence of chronic chylomicronemia. One of the simplest tests to detect plasma chylomicrons is the observation of a layer of chylomicrons at the top of the plasma stored overnight at 4 °C in a refrigerator, the so-called refrigerator test[17]. However, this test can give false-negative results even in the presence of massive hypertriglyceridemia. PAGE remains one of the most useful methods for detecting and evaluating chylomicronemia, as demonstrated in this report (Figure 2). Measurement of serum remnant like particle-cholesterol levels[23], a parameter of impaired triglyceride metabolism, could be useful to speculate on the presence of chylomicrons.

In conclusion, determination of serum triglyceride levels and identification of chylomicrons as well as measurement of pancreatic enzymes might be important in developing the therapeutic regimen. As in the present cases with acute abdomen following the fatty food ingestion, the identification of hypertriglyceridemia as well as an abdominal CT scan might be useful in establishing the diagnosis of acute pancreatitis and in preventing further progression of pancreatitis, when hypertriglyceridemia interferes with the evaluation of pancreatic enzyme activities and ultrasound examination provides poor pancreatic visualization.

We thank Yuko Omura, Yurie Saito and Sayo Nakata for their invaluable assistance.