Autoimmune hepatitis (AIH) is an immune-mediated chronic inflammation of liver tissue. It is characterized by elevated serum transaminase levels, hypergammaglobulinemia, serum autoantibodies, and a good response to immunosuppressive therapy[1,2]. Although its etiology is unknown, genetic factors have been implicated to be involved in its pathogenesis. In previous studies human HLA DRB1*0 301, DRB*0 401 (in Caucasian) and DRB1*0 405 (in Chinese) have been identified as independent determinants of susceptibility to AIH[3,4]. In addition, tumor necrosis factor α (TNF-α ) and complement C4 alleles have been associated with AIH[5].

Primary biliary cirrhosis (PBC) is also an immune-mediated chronic disease in which progressive destruction of the bile ducts leads to fibrosis and cirrhosis. It exhibits specific autoantibodies and disorder of liver function. Twin and family studies suggest that there is a genetic component in PBC[6,7]. The genetic typing of HLA class II and III alleles revealed a highly significant increase of HLA DRw8 and C4A-Q0 alleles in patients with PBC compared with controls, and the HLA DRB1*0 801-DQA1*0 401-DQB1*0 402 haplotype was considered to represent a maker of disease progression[8]. Polymorphism of the interleukin 1 (IL-1) and vitamin D receptor genes have been reported to be associated with PBC[8,9]. These genes, however, are neither necessary nor sufficient to cause AIH or PBC.

Cytotoxic T lymphocyte antigen-4 (CTLA-4) is involved in the regulation of T cells and is a member of the same family of cell surface molecules as CD28[10]. CTLA-4 antigen is only expressed on activated T cells, which binds to B7 molecules on antigen-presenting cells. CTLA-4-B7 binding delivers negative signals to T cells affecting T cell proliferation, cytokine production, and immune responses. Breakdown in the B7-CD28/CTLA-4 pathway could alter T-cell response and lead to autoimmune diseases[11]. Many studies have shown that specific CTLA-4 gene polymorphisms confer susceptibility to several autoimmune diseases, such as Graves’ disease, insulin-dependent diabetes mellitus[12,13]. However, studies on the polymorphisms within CTLA-4 exon 1 ( + 49) and promoter (-318) gene in rheumatoid arthritis, multiple sclerosis and AIH have shown conflicting results in different ethnicis[14-20].

In this study, we investigated whether the polymorphisms of CTLA-4 exon 1 ( + 49) and promoter (-318) genes were associated with susceptibility to AIH and PBC in the Chinese population.

MATERIALS AND METHODS
Patients and controls

Blood samples from all subjects were obtained for DNA extraction. Blood was collected in EDTA tubes and DNA was extracted using the method of proteinase K treatment and phenol/choroform extraction.

CTLA-4 exon 1 + 49 polymorphism was defined using a polymerase chain reaction-restriction fragment length polymorphism (PCR-RFLP) with BbvI restriction enzyme. PCR was carried out using a forward primer 5’-CCACGGCTTCCTTTCTCGTA-3’ and a reverse primer 5’-AGTCTCACTCACCTTTGCAG-3’. Using a MJ PTC-200 Peltier thermal cycler samples were subjected to initial denaturation for 2 min at 95 °C, 40 cycles at 94 °C for 30 s, for denaturing, 45 s at 50 °C for annealing and 30 s at 72 °C for extension. A 327 bp fragment containing + 49 A/G polymorphism in exon 1 of CTLA-4 was amplified. The substitution created a Bbv I restriction site in G allele. Amplified products were incubated at 65 °C for 2 h using 2 U of Bbv I per reaction. Digested products were electrophoresed on a 2.0% agarose gel. Digested G allele yielded fragments of 244 bp and 84 bp, and an allele yielded a 327 bp fragment (Figure 1). 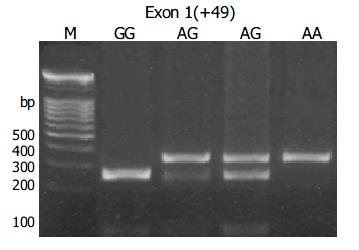 The CTLA-4 promoter polymorphism at position -318 was defined using PCR-RFLP and Tru9 I restriction enzyme. To amplify the target DNA in CTLA-4 promoter, PCR was performed with the forward primer 5’-AAATGAATTGGACTGGATGGT-3’ and reverse primer 5’-TTACGAGAAAGGAAGCCGTG-3’. A247 bp fragment was amplified. The following conditions were applied: initial denaturation for 2 min at 95 °C, followed by 40 cycles ( at 94 °C for 40 s, at 60 °C for 45 s, 60 °C, at 72 °C for 30 s), and a final extension for 2 min at 72 °C. PCR fragments with thymine at position -318 were cut into three fragments (21, 96 and 130 bp), whereas fragments with cytosine at the same position only had the restriction site at 21 bp (Figure 2). 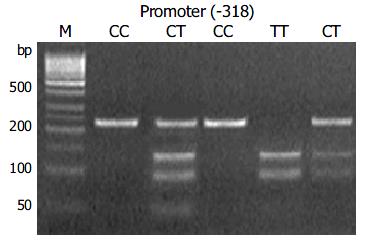 Hardy-Weinberg equilibrium was tested by calculating the χ2 for goodness of fit. Frequencies of the genotypes, alleles and phenotypes were analyzed by using chi-square test. Statistical significance was defined as P < 0.05. The odds ratio (OR) was calculated to measure the strength of the association observed. Calculation was made by using the Internet programs from http://www.myatt.demon.co.uk/epicalc.htm.

CTLA-4 is essentially a costimulatory receptor that controls activation of T cells. In contrast to CD28, CTLA-4 delivers negative signals to T cells. CTLA-4 gene is located on chromosome 2q33 and three CTLA-4 gene polymorphisms in exon 1(adenine or guanine at position) and in promoter -318, and a microsatellite (AT) n marker at position 642 of the 3’-untranslated region of exon 3[21,22]. The polymorphism, A/G variation at position + 49 ( + 49*A/G) in the first exon of the gene leads to the change of threonine to alanine in the leader peptide. Recently, several independent studies reported a reduced inhibitory function of CTLA-4 in individuals with certain CTLA-4 genotypes[12,23]. Kouki studied the CTLA-4 expression and T cell proliferative responses in patients with Graves’s disease and healthy controls genotyped for + 49*A/G. They found a correlation of + 49*G/G genotype with reduced inhibitory function of CTLA-4, and suggested that this particular polymorphism was the actual disease-associated allele[24]. Maurer also got the same result[25]. A similar effect on CTLA-4 function has been suggested for the second polymorphism[26]. Wang showed that -318T allele was associated with a higher promoter activity than -318C alleles. The presence of -318T alleles may thus contribute to up regulation of the expression of CTLA-4, and consequently represents one mechanism to inhibit exaggerated immune activity.

Studies on the CTLA-4 polymorphisms in autoimmune liver diseases have shown conflicting results on the relations between the polymorphisms of CTLA-4 exon 1 + 49 and AIH[18,20,27]. Agarwal indicated that CTLA-4 G allele at exon 1 +49 was more common in European Caucasoid patients with type 1 AIH and represented a second susceptibility allele, and there might be synergy between HLA-DRB1*0 301 and GG genotype in terms of disease risk. Djilali-Saiah found that the presence of +49GG predisposed to AIH type 1 in Canada children. However, Bittencourt found no associations between AIH (type 1 and type 2) and exon 1 CTLA-4 gene polymorphisms at position 49 in the Brazilian population.

In our study, we found that the frequency of -318C alleles was significantly increased in AIH patients compared with the control subjects, and GG-CC genotype occurred more frequently in CTLA-4 exon 1-promoter gene. It is therefore possible that the -318C allele and GG-CC genotype of CTLA-4 may contribute to susceptibility to Chinese patients with AIH. To our knowledge, this is the first report concerning an association of CTLA-4 promoter -318 polymorphism with AIH. In addition, we found a strong association between CTLA-4 exon 1 ( + 49) polymorphism and PBC, the GG genotype confers susceptibility to PBC in Chinese population. This result was coincident with Agarwal and colleague’s conclusion[19]. Likewise, the GG-CC genotype occurred more frequently compared with control subjects.

AIH and PBC are two autoimmune diseases of unknown pathogenesis. There is a general agreement that induction involves CD4+ T cells in the pathogenesis of AIH, but it is still not clear whether the liver damage was due to direct T cell cytotoxicity or involved autoantibodies, either through complement-mediated or antibody-dependent (ADCC) cytotoxic reactions[28]. T cell respones would certainly participate in the pathogenesis of PBC, as judged by histochemical staining of tissue samples, and by analyzing T cell lines that proliferate in the presence of putative mitochondrial autoantigens[29]. So we speculate that the single nucleotide polymorphism (SNP) of CTLA-4 (exon 1 + 49 and promoter -318), and the interaction between these two SNPs may alter the inhibitory effect of CTLA-4 on T cells, and it may be an important factor in the pathogenesis of autoimmune hepatitis and primary biliary cirrhosis.

Besides CTLA-4 exon 1 ( + 49) and promoter (-318) polymorphisms, the CTLA-4 (AT) n microsatellite within the 3’-untranslated region of exon 3 was also a good candidate gene of autoimmune disease[21]. Previous studies demonstrated that AT-rich tracks might contribute to mRNA instability[30,31]. If the size of CTLA-4 AT tract limited the accumulation of CTLA-4 mRNA, down-regulation of CTLA-4 expression might account for the increase in the risk of an autoimmune disease. Several studies found that CTLA-4 (AT) n polymorphism was associated with Graves’disease and rheumatoid arthritis[32,33]. Since it may be involved in mRNA stability, futher studies are needed to determine the relations between CTLA-4 (AT) n polymorphism and autoimmune liver diseases.