AIM: Immune escape mutations of HBV often occur in the dominant epitope, the second-loop of the a determinant of hepatitis B surface antigen (HBsAg). To let the hosts respond to the subdominant epitopes in HBsAg may be an effective way to decrease the prevalence of immune escape mutants. For this reason, a man-made clone of HBV S gene with the second-loop deletion was constructed. Its antigenicity was evaluated by yeast expression analysis and DNA immunization in mice.

METHODS: HBV S gene with deleted second-loop, amino acids from 139 to 145, was generated using splicing by overlap extension. HBV deleted S gene was then cloned into the yeast expression vector pPIC9 and the mammalian expression vector pcDNA3 to generate pHB-SDY and pHB-SD, respectively. The complete S gene was cloned into the same vectors as controls. The deleted recombinant HBsAg expressed in yeasts was detected using Abbott IMx HBsAg test kits, enzyme-linked immunoadsorbent assay (ELISA) and immune dot blotting to evaluate its antigenicity in vitro. The anti-HBs responses to DNA immunization in BALB/c mice were detected using Abbott IMx AUSAB test kits to evaluate the antigenicity of that recombinant protein in vivo.

RESULTS: Both deleted and complete HBsAg were successfully expressed in yeasts. They were intracellular expressions. The deleted HBsAg could not be detected by ELISA, in which the monoclonal anti-HBs against the α determinant was used, but could be detected by Abbott IMx and immune dot blotting, in which multiple monoclonal anti-HBs and polyclonal anti-HBs were used, respectively. The activity of the deleted HBsAg detected by Abbott IMx was much lower than that of complete HBsAg (the ratio of sample value/cut off value, 106 ± 26.7 vs 1814.4 ± 776.3, P < 0.01, t = 5.02). The anti-HBs response of pHB-SD to DNA immunization was lower than that of complete HBV S gene vector pHB (the positive rate 2/10 vs 6/10, 4.56 ± 3.52 mIU/mL vs 27.60 ± 17.3 mIU/mL, P = 0.02, t = 2.7).

CONCLUSIONS: HBsAg with deleted second-loop of the α determinant still has antigenicity, and can also raise weak anti-HBs response in mice to DNA immunization, suggesting that it is possible to develop a subdominant vaccine for preventing infections of immune escape mutants of HBV.

The prevalence of hepatitis B virus (HBV) is still high in some areas of the world[1,2]. Universal inoculation of hepatitis B vaccine helps to sharply decrease the prevalence of HBsAg carriers from about 10% to 2% among the urban children in China[3]. However, there are about 5%-10% of healthy individuals demonstrating no or inadequate responses following a standard vaccination schedule[4,5]. A portion of these non-responders may be with a breakthrough infection of immune escape mutants[6,7]. The escape mutant infections were also frequently occurred in liver transplant recipients under hepatitis B immunoglobulin prophylaxis[8,9]. The prevalence of the mutants, usually as occult HBV infections, will progressively increase in the future since certain mutants are stable enough to be horizontally transmittable[10,11] and have a potential to be transmitted through blood transfusion because of escaping the routine screening assays. The second-loop from aa139 to aa147 of the α determinant of HBsAg is the dominant epitope. The escape mutants usually have mutations in this region, including K141E, P142S, D144E and G145R [8,9,12-16], though there are mutations in the rest part of HBsAg[17,18], and induce an altered immunity against the second-loop so that the mutants can escape vaccine-raised antibodies or rabbit polyclonal antibodies to some extent[19,20]. Fortunately, recent researches suggested that weak epitopes, such as subdominant epitopes, might not be escaped[21,22]. To let hosts respond to subdominant epitopes or to both dominant and subdominant epitopes may be an effective way for the prevention of escape mutant infections. For these reasons, a man-made clone of HBV S gene with the second-loop deletion of the α determinant region was constructed in order to destroy the dominant epitope and let the subdominant epitopes be responded by the hosts. The antigenicity of that deleted S gene was evaluated by means of yeast expression analysis and DNA immunization in mice.

HB-SD was the fragment of HBV S gene with deletion of seven amino acid residues from 139 to 145 of the second-loop of the α determinant. In order to construct HB-SD, Two fragments of HBV S gene from codon 1 to codon 138 and from codon 146 to codon 226 were obtained by polymerase chain reaction (PCR) using HBS-SD1/HBS-SD2 and HBS-SD3/HBS-SD4 as primers, respectively, and pTZ19U-HBV as template. The fragments were then connected using splicing by overlap extension after the PCR products were run on 20 g/L agarose gel and a given band was extracted using DNA gel extraction kit[23]. HB-SD was obtained at last by purifying the spliced products. HB-SDY was obtained by PCR using HB-SD as template and HBSPIC9-1/HBSPIC9-2 as primers. The control fragments of complete HBV S gene were obtained using pTZ19U-HBV as template, and HBS-SD1/HBS-SD4 or HBSPIC9-1/HBSPIC9-2 as primers.

For construction of pHB-SDY, the fragments of HB-SD and pPIC9 were digested by restriction endonucleases EcoRI and Not I, respectively. For construction of pHB-SD, the fragment of HB-SD was digested by restriction endonucleases Hind III and Eco RI, respectively as well as pcDNA3. Digested DNA fragment and vector DNA were ligated using T4 DNA ligase after purification. Plasmid DNA was obtained after Escherichia coli was transformed by ligated products. Candidate recombinant plasmids were selecteds by restriction fragment length polymorphism (RFLP) analysis and automatic DNA sequencing by Bioasia Biological Engineering Company. Control vectors pHB and pHBY were generated using the control fragments of complete HBV S gene in the same way.

Expression of pHB-SDY in yeast

Large scale plasmid DNA of recombinant plasmids pHB-SD and pHB was prepared using Qiagen’s Max-Prep kits. Plasmid DNA of pcDNA3 was also prepared to be used as control. Plasmid DNA was adjusted to 1 µg/µL in normal saline. Thirty BLBA/c mice were randomly divided into 4 groups. Each mouse was injected 100 µL of plasmid DNA which was distributed over five different sites into the anterior tibialis muscle 5 d after the injection of an equal volume of 2 g/L bupivacaine. Boost injection was carried out 3 times every 3 wk with equal amount of plasmid DNA. Four weeks after the last boost injection, all mice were put to death for serum. Anti-HBs in serum was detected using Abbott AUSAB kits. 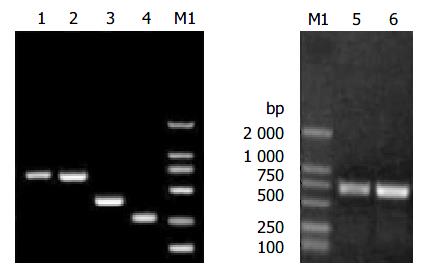 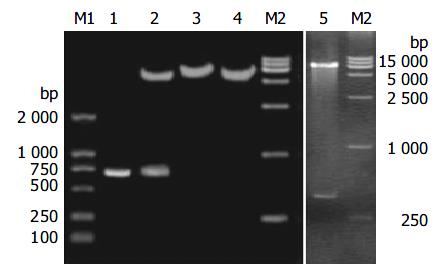 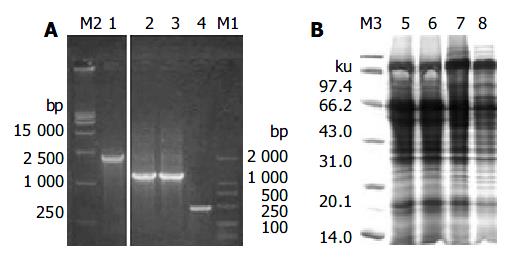 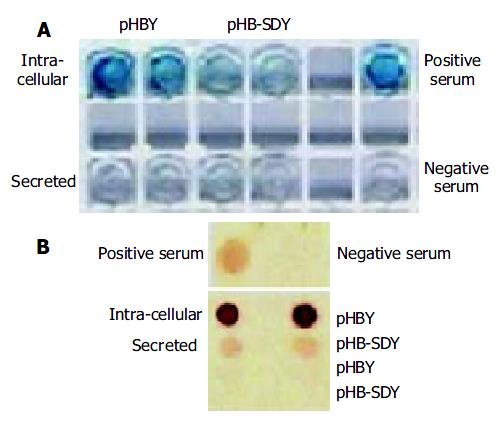 All mice were alive after the inoculation schedule was finished. The anti-HBs levels are shown in Table 2. The anti-HBs was negative in groups of normal saline and plasmid pcDNA3. The positive rate of anti-HBs was 2/10 in pHB-SD group and 6/10 in pHB group. The amount of anti-HBs induced in groups of HBV S gene with deleted second-loop of the α determinant was less than that in the complete HBV S gene groups (P = 0.02, t = 2.7).

The response rate of recombinant plasmids was very low in our study. It might be the nature of DNA immunization because this phenomenon also occurred in researches of other scientists[32]. The deleted HBV S gene was successfully expressed in yeasts. However, the expression conditions need to be improved. The exact value of deleted HBsAg should be evaluated after purified recombinant proteins are obtained in the future. The effect of anti-HBs raised by subdominant epitopes of HBsAg on the infectivity of HBV should also be evaluated in the future.

HBsAg with deleted second-loop of the α determinant still has antigenicity, and can also raise weak anti-HBs response in mice to DNA immunization, suggesting that it is possible to develop a subdominant vaccine for preventing infections of immune escape mutants of HBV.