AIM: To design and construct an exogenous multiple epitope of helper T lymphocytes (HTL), and to evaluate its effect on anti-HBs response through DNA immunization.

There are more than 300 millions of HBsAg carriers all over the world. Most of them have active infection of hepatitis B virus. Chronic hepatitis B virus infection may cause significant incidence of chronic hepatitis, cirrhosis, and hepatocellular carcinoma[1,2]. Hepatitis B vaccine inoculation is an important measure for prevention of HBV infection. Considerable variability exists, however, in response to hepatitis B vaccines, and 5-10% of healthy young adults demonstrate no or inadequate responses following a standard vaccination schedule[3-8]. The frequency of non- and low-responders is up to 40-50% in vaccined subjects with depressed immune responses, such as patients on maintenance hemodialysis. Only some of the non- or low-responders to hepatitis B vaccine are responsive to the novel recombinant triple antigen hepatitis B vaccine (pre-S1/S2 and HBsAg)[9]. These non- or low-responders usually carry specific type of class II human leukocyte antigens (HLA II antigens), such as DRB1*3, DRB1*7, DQB1*20 or DPB1*1101[10-13]. The antigen presentation is blocked because these HLA II antigen molecules on the surface of helper T lymphocytes (HTL) cannot combine efficiently with the epitope of HTL on the vaccine protein, hepatitis B surface antigen (HBsAg)[14,15]. Adding exogenous multiple epitopes of HTL, which can combine with much more types of HLA II antigens to hepatitis B vaccine may be a good way to solve this problem. Conducting HTL epitopes from tetanus toxoids (aa73-99, aa830-845) and artificial epitopes of PADRE into HBsAg can enhance the immunogenicity of HbsAg[16,17]. Adding exogenous HTL epitopes to HBsAg can let natural non-responder mice respond to HbsAg[18]. These data suggest that it is possible to use exogenous HTL epitopes to improve hepatitis B vaccine. For these reasons, an exogenous multiple epitope of HTL, MTE5, consisting of five HTL epitopes from different origins was designed and constructed. Its effect on anti-HBs response was evaluated through DNA immunization after it was inserted in different loci of HBV pre-S2/S gene.

MTE5 splicing and cloning MTE5 was designed to consist of HTL epitopes from heat shock protein 65 of mycobacterium tuberculosis (aa1-20), E2 polyprotein of rubella virus (aa54-65), artificial epitope (PADRE), heat shock protein 60 of chlamydia trachomatis (aa35-48) and tetanus toxoid (aa830-843). These epitopes were translated into a 219-bp fragment of DNA sequence. Then, it was synthesized in four oligonucleotide fragments, which were linked together at last using splicing by overlap extension[19,20]. The oligonucleotide fragments F1 and F2, F3 and F4 were spliced by PCR respectively at first. Their purified products were spliced together again to generate MTE5. The construct of pUMTE5 was generated by cloning MTE5 into plasmid pUC18 at the site between restriction endonucleases Bam HI and Xba I. pcMTE5 then was obtained by sub-cloning MTE5 from pUMTE5 into mammalian expression plasmid, pcDNA3. The sequence of MTE5 in pcMTE5 was confirmed using automatic DNA sequencing in Bioasia Biological Engineering Company.

HBV pre-S2/S gene cloning Pre-S2/S fragment of HBV was obtained using pTZ19U-HBV as template, and HBV-P1 and HBV-P2 as primers. The purified product was then cloned into pUC18 at the site between the restriction endonucleases Hind III and Eco RI to generate recombinant plasmid pUHB. pcHB was constructed by sub-cloning the fragment of HBV pre-S2/S gene into pcDNA3. pcHB was denominated after its sequence was confirmed by automatic DNA sequencing.

Construction of chimeric plasmids of MTE5 and HBV pre-S2/S gene MTE5 was designed to insert into the region of pre-S2 gene (Bam HI), 5’ terminal of S gene (Hinc II, Xba I) and 3’ terminal of S gene (Acc I) respectively. All the inserting sites were far from the α determinant to avoid deceasing the antigenicity of HBsAg. In order to obtain these chimeric plasmids, four fragments of MTE5 with different types of restriction endonuclease site in its two terminals were generated through PCR with different primers at first. Then four chimeric plasmids, pcHB-MTEB, pcHB-MTEH, pcHB-MTEX and pcHB-MTEA were constructed by cloning MTE5 into pUHB at first since pcDNA3 had some similar restriction endonuclease sites of its own, and then by sub-cloning the chimeric fragment of MTE5 and pre-S2/S into pcDNA3. The sequences of these recombinant plasmids were confirmed by automatic DNA sequencing.

Large-scale DNA preparation, DNA immunization Large-scale plasmid DNA of recombinant plasmids was prepared using Qiagen’s Max-Prep kits. Plasmid DNA of pcDNA3 was used as control. Plasmid DNA was adjusted to 1 µg/mL in normal saline. Seventy BLBA/c mice were randomly divided into 8 groups. Every mouse was injected a total 100 µL of plasmid DNA which was distributed over five different sites into the anterior tibialis muscle 5 d after the injection of an equal volume of 2 g/L Bupivacaine. Boost injection was carried out every 3 wk for 3 times with an equal amount of plasmid DNA. Four weeks after the last boost injection, all mice were put to death for serum.

The theoretical products of the first and second round splicing were 120 bp and 219 bp, respectively. The actual products shown in Figure 1 were same as the design. Restriction fragment length polymorphism (RFLP) analysis was used to identify the positive clones after the 219-bp fragment was inserted into pUC18 to generate recombinant plasmid pUMTE5, which is shown in Figure 2. Two correct clones were selected by DNA sequencing among 13 positive clones of pUMTE5. The rest clones usually carried deletions or mismatches in the region longer than 50 bp of the synthesized oligonucleotide fragments, which implied that the synthesized DNA oligonucleotide fragment longer than 50 bp would not be reliable. The DNA sequence and amino acid sequence of MTE5 are shown in Figure 3. MTE5 was successfully cloned into pcDNA3 to generate pcMTE5 at last. 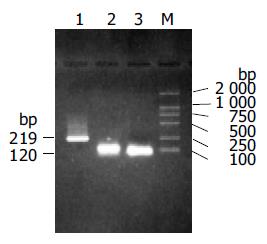 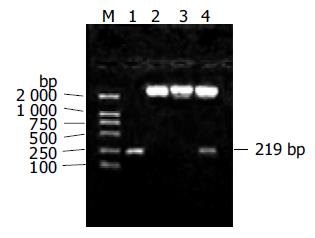 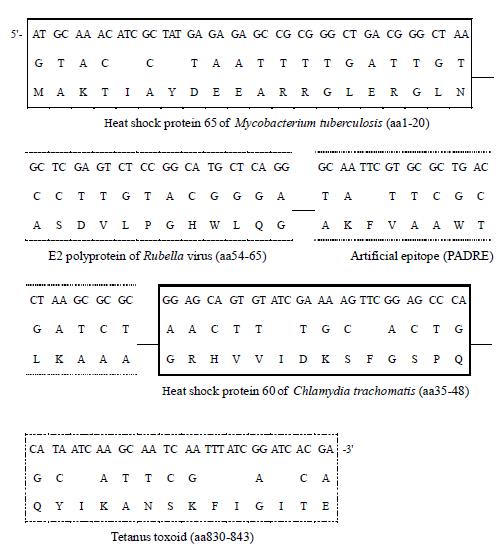 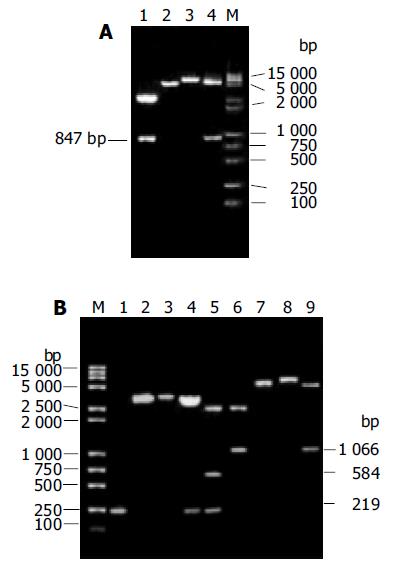 Four fragments of MTE5 with different types of restriction endonuclease site in its two terminals were successfully obtained by PCR. They were cloned into pUHB to generate their recombinant plasmids at first. The chimeric fragments of MTE5 and pre-S2/S were sub-cloned into pcDNA3 to generate their mammalian expression plasmids at last. RFLP analysis was used to identify positive clones. The results of RFLP analysis of the recombinant plasmid pcHB-MTEX with MTE5 inserted in site of Xba I is shown in Figure 4B as an example. The sequence of all chimeric plasmids was confirmed to be correct by DNA sequencing.

Compared with the control groups and the sample from the opposite leg, all experimental groups had obvious inflammation cell filtration in the inoculation sites and HBsAg expression in muscle cells with disassembling and rupture. HBsAg was prominently expressed in cytoplasm of cells. Some cells had membrane expressions simultaneously. The positive signal of HBsAg was usually expressed in cytoplasm, and inflammation was more obvious in non- or low-anti-HBs response groups of chimeric plasmids.

The simple way for a given protein to obtain exogenous multiple epitopes was to link them to a higher molecular weight protein. The immune responses were not always good enough because of the interfering effects of immune responses of the carrying protein[21]. The spliced exogenous multiple epitopes of HTL used in this study, however, might not have immune responses of its own, and were thus preferable. The exogenous multiple epitopes of HTL, MTE5, constructed in this study consisted of 2 universal HTL epitopes and 3 unique HTL epitopes. Two universal epitopes of tetanus toxoid (aa830-843) and artificial epitope PADRE were both effective for 95% individuals of the population[22-26]. They might cover more individuals when used together. Three unique epitopes from Mycobacterium tuberculosis (aa1-20), E2 polyprotein of rubella virus (aa54-65) and heat shock protein 60 of Chlamydia trachomatis (aa35-48) were selected for HLA-DRB1*3, HLA-DRB1*7 and HLA-DR4 respectively[27-29]. They could improve the anti-HBs responses of hepatitis B vaccine in individuals who carried these types of HLA II antigens. Thus, the overall response rate of HB vaccine in population could rise dramatically. During the course of splicing, many deletions or mismatches were found in the spliced sequences, especially in the region of synthesized oligonucleotide fragments longer than 50 bp. It implied that synthesized DNA oligonucleotide fragments shorter than 50 bp would be preferable.

The chimeric plasmid of pcHB-MTEB had an equal or better anti-HBs response as comparing with that of pcHB, and might be a good candidate for new hepatitis B vaccine in further research. DNA immunization is a simple and quick way to evaluate recombinant plasmids. The response rate of recombinant plasmids, however, was very low in this study. A considerable portion of mice did not develop anti-HBs at all. Its reason is not clear. It might be the nature of DNA immunization because this phenomenon also occurred in other researches[31]. The exact value should be evaluated after purified recombinant protein is obtained through mammalian expression. The effect on overcoming the drawback of the polymorphism of HLA II antigens should also be evaluated in the future.