AIM: To determine if the T cell memory to HBsAg can persist for a long time after hepatitis B (HB) vaccination.

METHODS: Thirty one vaccine recipients who were healthcare workers (18 females and 13 males aged 34-58 years) from Utrecht University Hospital, Netherlands, and had previously received a standard course of vaccination for hepatitis B were investigated and another 9 unvaccinated healthy volunteers from the same hospital were used as the control. Blood samples were taken just before the experiment to test serum anti-HBs levels and the subjects were classified into different groups according to their serum titers of anti-HBs and vaccination history. Their peripheral blood mononuclear cells (PBMC) were isolated from freshly heparinized venous blood and the proliferative response of T lymphocytes to the recombinant hepatitis B surface antigen (HBsAg) was investigated.

RESULTS: Positive serum anti-HBs was found in 61.3% (19/31) vaccine recipients and a significant in vitro lymphocyte proliferative response to recombinant HBsAg was observed in all the vaccinees with positive anti-HBs. Serum anti-HBs level ≤ 10 IU/L was found in 38.7% (12/31) subjects. In this study, we specially focused on lymphocyte proliferative response to recombinant HBsAg in those vaccine recipients with serum anti-HBsAg less than 10 IU/L. Most of them had received a standard course of vaccination about 10 years before. T lymphocyte proliferative response was found positive in 7 of the 12 vaccine recipients. These results confirmed that HBsAg-specific memory T cells remained detectable in the circulation for a long time after vaccination, even when serum anti-HBs level had been undetectable.

CONCLUSION: The T cell memory to HBsAg can persist for at least 10 years after HB vaccination. Further booster injection is not necessary in healthy responders to HB vaccine.

Since the introduction of hepatitis B vaccination in the early 1980s, many epidemiological studies have been done to determine the efficacy of the vaccine in eliciting protective immunity against HBV infection. The antibody response to HB vaccine has been found occurring in more than 90% of the healthy vaccinees[1-15]. Kinetic studies showed serum anti-HBs levels decreased with time following vaccination[5,9,14,16]. Several demographic and behavioral factors have been found to be associated with a lower rate of antibody response to hepatitis B vaccine[17,18]. In a considerable percentage of vaccinated persons the anti-HBs level was expected to drop to below 10 IU/L after 5-10 years[5,19,20]. The decline seemed to be proportional to the antibody titer originally obtained[15,21]. The necessity of implementing booster injections for those with their anti-HBs levels less than 10 IU/ L has remained to be determined.[13,16,20,22,23]

A correlation between in vivo antibody production and in vitro T cell proliferative response following immunization with HBsAg vaccine has been reported[24,25]. In previous studies we demonstrated that the B cell memory to HBsAg persisted for a long time after HB vaccination[26]. The purpose of this study was to determine whether the HBsAg-specific T lymphocyte memory could persist for a long time after HB vaccination especially in vaccine recipients whose serum anti-HBs level was less than 10 IU/L in an attempt to determine the optimal policy of booster vaccination.

Forty healthy healthcare personnel from Utrecht University Hospital, the Netherlands participated in the study. Of them, 31 subjects (18 females and 13 males aged 34-58 years) had previously received a standard course of hepatitis B vaccination of 10 or 20 µg HB vaccine from Merck Sharp & Dohme, West Point, PA, USA (MSD) or Smith Kline and Beecham (SKB, Rixensart, Belgium) at 0, 1, and 6 months about 10 years before. Another 9 unvaccinated healthy volunteers (5 females and 4 males aged 29-57 years) from the same hospital functioned as the control.

Recombinant HBsAg free of preservatives was a gift from Merck Sharp & Dohme, West Point, PA, USA. Hepatitis B vaccine used in vivo in the study was HB-Vax (MSD). Anti-HBs levels were measured in the study by means of Ausab EIA test (Abbott, Chicago, IL, USA).

The serum from all the volunteers was tested for HBV markers and the subjects were classified into four groups according to their serum titers of anti-HBs and vaccination history. Group I, unvaccinated (n = 9); group II, vaccinated and with anti-HBs ≤ 10 IU/L (n = 12); group III, vaccinated and with anti-HBs 10-100 IU/L (n = 6); group IV vaccinated and with anti-HBs greater than 100 IU/L (n = 13). The unvaccinated healthy volunteers had no evidence of natural HBV infection (negative in the detection of serum HBsAg, anti-HBc or anti-HBs). Blood from all the subjects was collected, serum was tested for anti-HBs levels and peripheral mononuclear cells (PBMCs) were used for lymphocyte proliferation. All the subjects from whom blood was drawn gave their written informed consent for the study. This study was approved by the Medical Ethical Committee of Utrecht Hospital, the Netherlands, under No 92/82.

PBMCs were suspended in RPMI 1640 culture medium supplemented with 10% heat-inactivated pooled human AB serum (Red Cross Blood Bank, Utrecht, the Netherlands), 25 mM HEPES, 2 mmol/L L-glutamine, 50 U/ml penicillin and 50 µg/ml streptomycin. PBMCs (4×105 cells/well) from each sample were prepared in 96-well U-bottom plates and stimulated with different doses of HBsAg (10 ng/mL, 30 ng/mL, 100 ng/mL, 300 ng/mL and 1.0 µg/ml) for 7 days at 37 °C in 95% humidified air with 5% CO2. Concanavalin A (Con A) at 240 µg/ml, tetanus toxoid and diphtheria toxoid at 3.3 µg/ml served as each sample’s positive control for lymphocyte proliferation. Negative control cultures were made by incubating cells in medium alone. During the final 18 h incubation, the cells were pulsed with 1.0 µCi of (3H)-thymidine per well. Sixteen to twenty hours after the cultures were harvested onto glass filters using a multichannel cell harvester the incorporated (3H)-thymidine was measured by liquid scintillation counting. Since there were individual variations in the concentration of maximal stimulation and 300 ng/mL and 1.0 µg/ml of HBsAg gave the maximal stimulation and the least variability in the triplicates, we chose the maximal stimulation at the concentration of 300 ng/mL and 1.0 µg/ml of HBsAg as the optimal result for each subject. Results were expressed as net counts (the value of (3H)-thymidine incorporation of HBsAg stimulation culture minus the value of (3H)-thymidine incorporation of medium). A net count was considered positive if the value of (3H)-thymidine incorporation was higher than the average in the unvaccinated control group + 2 SD. 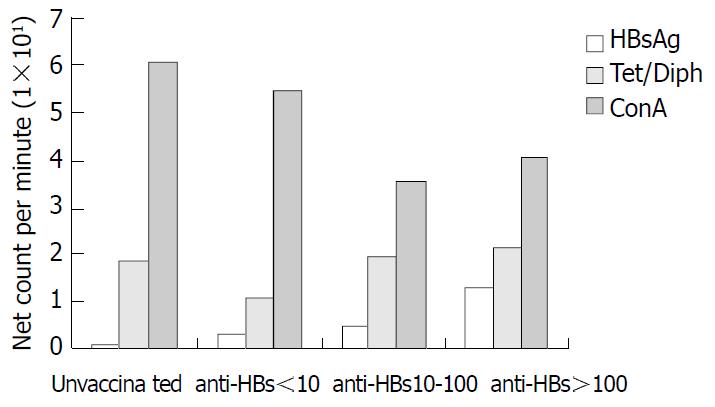 The humoral immune response to hepatitis B after vaccination has been studied systematically. However, duration and the quality of long term protection from HB infection in healthy vaccinees remain a matter of discussion[1-8]. Especially the T cell response to hepatitis B vaccine has not been fully characterized. Several studies were performed to detect the lymphocyte proliferative response in vitro with purified HBsAg, recombinant HBsAg, preS1, preS2 and peptides of HBsAg, but results were not consistent[26-29]. The immune response to HBsAg in vitro was difficult to detect and might not be detected in all vaccinated individuals[27]. T cell responses in vitro after vaccination in individuals responding to vaccination were significantly diminished after 12 weeks, a time when the antibody response was still vigorous[30]. It has been suggested that there were many variables such as geometry of the wells, the quality of culture media and in particular that of the added serum that influenced the assay results. In addition, the number of cultured PMBCs and duration of the culture might be important[24]. In our previous experiments, we tested the influence of variables such as cell density, culture time and dose of antigen for lymphocyte proliferation. We observed that 1.0 µg/ml HBsAg, 4×105 cells/ well, use of human AB+ serum and 6 days of culture achieved optimal results. These results confirmed the assay conditions described by G. Leroux-Roels[8].

To our knowledge, few reports have elucidated the long term efficacy of hepatitis B vaccination on T- cell immunity. In the past, a few groups have induced HBsAg-specific lymphocyte proliferative response in culture of fresh PBMCs from the individuals who were just vaccinated with hepatitis B vaccine or received a booster dose during the experiment[24,30,31]. In our study 31 healthy persons (healthcare personnel) volunteered to give blood to test the specific response to hepatitis B. All of them were vaccinated several years ago. Our data showed that a lymphocyte proliferative response to HBsAg should be detected in vitro in all the vaccine recipients with positive anti-HBs. This result further confirms that in vivo humoral and in vitro cellular immune responses to HBsAg are closely correlated. In addition, we found that the HB vaccine has the capacity to stimulate the cellular immune response in vitro.

However, the most interesting group in our study was the vaccine recipients with serum anti-HBs levels less than 10 IU/L. We observed positive lymphocyte proliferative responses in 7 of the 12 subjects, although the maximal proliferation was lower than that in vaccine recipients with positive serum anti-HBs. We previously reported that an immunological B cell memory to hepatitis B after a vaccination existed in healthcare personnel though serum anti-HBs titers were decreased with time or not measurable in some cases[32]. The long term efficacy of hepatitis B vaccination was also investigated in China and it was found that the protective efficacy of hepatitis B vaccination was still existed with a low risk of becoming a carrier and a low serum level of neutralizing antibody even at the time of 12 years after vaccination[9]. These findings suggest that immunity can persist for a long time after vaccination even when the serum antibody levels are below 10 IU/L. It is therefore possible that the T cell immune response plays an important role in protecting against hepatitis B virus infection and becoming a carrier in the absence of antibodies, either directly or indirectly by providing help to produce antibodies.

Our group previously showed a sensitive in vitro method for the study of B cell memory to HBsAg[33]. A good correlation between in vitro mitogen induced IgG anti-HBs spots and immune memory after a booster dose of HB vaccination was observed in naturally infected subjects and vaccine recipients. Our results that 58% of the HB vaccine recipients with anti-HBs ≤ 10 IU/L have kept lymphocyte proliferative responses many years after vaccination could confirm that HB vaccine not only induces humoral immunity but also cell-mediated immunity and that T cell memory often persists longer than serum anti-HBs titers.

We conclude that T cell memory to HBsAg can be demonstrated by lymphocyte proliferation many years after HB vaccination, even in the majority of persons with serum anti-HBs ≤ 10 IU/L. Booster vaccination in those persons is probably not necessary as T cell memory is still existed, which means that the protective antibodies will reappear rapidly or that effector cytotoxic T cells can rapidly eliminate virus infected hepatocytes after exposure to HBV. Our results are of practical value because of high prevalence of hepatitis B in Asia, especially in China.