AIM: To observe the effect of β-ionone on the proliferation of human gastric adenocarcinoma cell line SGC-7901 and the inhibition of metalloproteinase.

METHODS: Using growth inhibition, Zymograms assays and reverse transcription-polymerase-chain reaction (RT-PCR), we examined cell growth rates, activities of matrix metalloproteinases-2 (MMP-2) and -9 (MMP-9), and expression of metalloproteinases-1 (TIMP-1) and -2 (TIMP-2) in SGC-7901 cells after the treatment with β-ionone for 24 h and 48 h, respectively.

CONCLUSION: β-ionone can inhibit the proliferation of SGC-7901 cells, upregulate the expression of TIMP-1 and TIMP-2 expression, and may influence metastasis of cancer.

Epidemiological data showed that regular consumption of fruits and vegetables was associated with a reduced risk of chronic diseases such as cancer and cardiovascular diseases[1-4]. Isoprenoid is an important group of nutritious elements found in fruits,vegetables and cereal grains, giving rise to about 22 000 secondary products during its metabolism in these plants. It has been found that these compounds shared a common precursor, mevalonic acid[14]. Isoprenoids have been shown to suppress chemically-induced carcinogenesis[5-10] and the growth of cancer cells[11-13]. β-ionone, an end-ring analog of β-carotenoid, represents a subclass of cyclic isoprenoids and has been demonstrated to have an anticancer effect[15]. β-ionone was effective in chemoprevention of 7,12-dimethylben[a] anthracene-induced mammary carcinogenesis in SD rats, with its tumor multiplicity reduced by 45%[16]. It has also been found to be associated with growth inhibition of melanoma and breast cancer cells as well as metastasis of tumor cells[17-20]. However, the exact mechanisms remain to be clarified, and the effect of β-ionone on gastric cancer cells is unknown.

Chemoprevention has been an approach to treat advanced cancers[21-25]. Gastric cancer is one of the most common malignancies in China and in other parts of the world[26-34]. Understanding the mechanisms of the possible inhibitory effect of β-ionone on proliferation of gastric adenocarcinoma cells could provide a way to prevent this disease. Therefore, in this study, we studied the effect of β-ionone on the proliferation of human gastric adenocarcinoma cell line SGC-7901 and on the regulative factors of tissue metalloproteinases and investigated the underlying mechanism.

The SGC-7901 cells were seeded into six 24-well plates (Nuc, Denmark) with 2×104 cells/well after 24 h culture. Twenty-four hour later, the medium was replaced with the media supplemented with at different concentrations of β-ionone. In the next 8 days, the cells were treated with a trysin-EDTA solution at 37 °C for 2 minutes and harvested from 3 wells per day for each plate. The cells were pelleted by a short spin at 1 000 g and resuspended in phosphate-buffered saline (PBS). Typan blue exclusion test was used to count viable cells by a hemocytometer. The number of cells at 24 h was deducted from the final cell counts to provide an estimate of the net increase. The β-ionone concentration required to inhibit the net increase in the 48 h cell count by 50% (IC50) was measured by plotting data obtained from three or more times. The means were obtained on each of the eight days and used to draw a cell growth curve. The inhibitory rate (IR) was calculated according to the formula: IR (%) = (total number of cells in negative control-number of cells in test group)/total number of cells in negative control×100%.

Zymograms assay for activities of gelatinase

Although many kinds of proteinase are involved in tumor metastasis, members of the matrix metalloproteinase (MMPs, gelatinase) and TIMP families, play a pivotal role in these events. MMPs are a group of zinc-dependent endopeptidase molecules that have the potential to degrade proteins of the extracellular matrix. MMP activity was under regulation at several levels, including activation of the MMP zymogens and specific inhibition by the tissue inhibitors of metalloproteinase (TIMPs)[54]. We determined the activities of gelatinase in SGC-7901 cells treated with β-ionone.

The SGC-7901 cells were seeded in 100 ml bottles, each containing 5×106 cells. After incubation for 24 h, the medium was replaced with 400 μL of serum-free medium supplemented with β-ionone at different concentrations for 24 h and 48 h. The serum-free media were loaded onto a 100 g/L SDS-polyacrylamide gel co-polymerized with 1 g/L gelatin (Amresco Corp, USA) and separated under a non-denaturing condition for 3-4 h. Then, the gels were incubated in 25 g/L Triton X-100 (Sigma, USA) for 1 h and subsequently in a substrate buffer (50 μmol/L Tris, PH7.5, containing 10 mmol/L CaCl2, 200 mmol/L NaCl and 1 μmol/L ZnCl2) for 12 to 16 h at 37 °C. Finally, the gels were stained in a solution containing 1 g/L Commassie blue R250, 450 g/L methanol and 100 g/L acetic acid, and the gelatinolytic activity was indicated by bands in a blue background.

SGC-7901 cells (5×106) were incubated at different concentrations of β-ionone for 24 h and 48 h, the total cellular RNA was isolated. Concentrations and purity of total RNA were determined. RT-PCR was performed following the manufacturer’s instructions (Takara Biotech, Dalian, China). Total RNA (5 µg) and AMV reverse transcriptase XL were used to synthesize cDNA. Twenty-five μL PCR mixture containing 4 μL of RT reaction product, 2.5 U Taq DNA polymerase and 20 pmol primers, was heated for 5 min at 94 °C for pre-denaturation, and then subjected to 35 PCR cycles, denaturation at 94 °C for 30 s, annealing at 60 °C for 30 s for and extension at 72 °C for 45 s, in a PTC-100 thermocycler (MJ Research, USA). TIMP-1 and TIMP-2 genes were amplified with specific primers, with the gene for β-actin as an internal control (Table 1). The amplified products were resolved in a 20 g/L agarose gel containing ethidium bromide, and visualized under ultraviolet light. The density and area of each band were analyzed using the ChemiImagerTM 4 000 digital system (Alpha Innotech Corp, USA).

Student’t test was used for analysis of data. P < 0.05 was considered statistically significant. 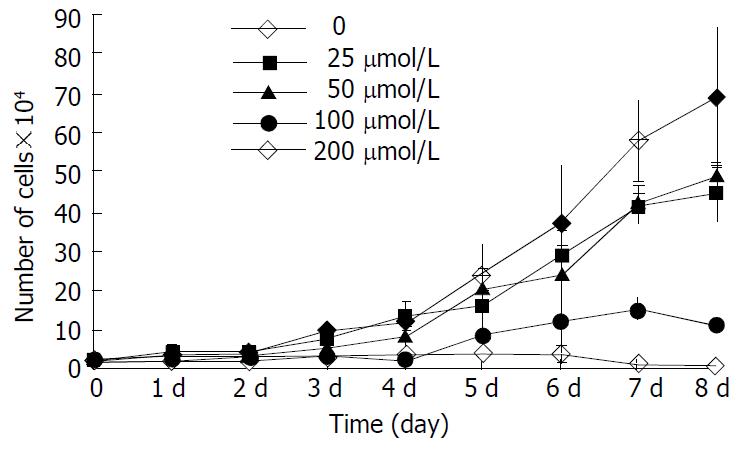 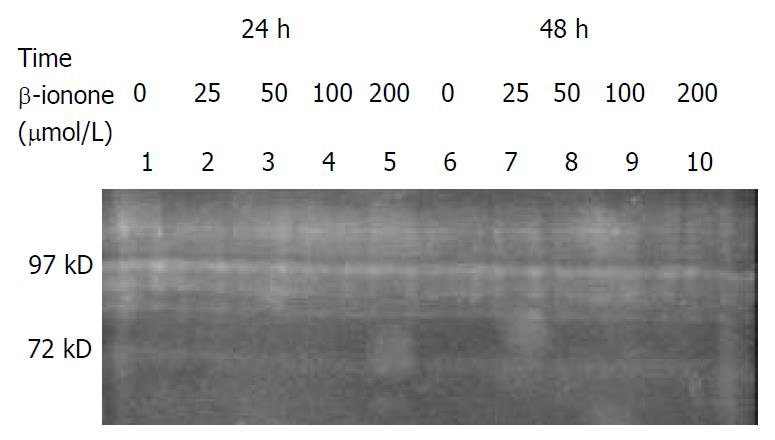 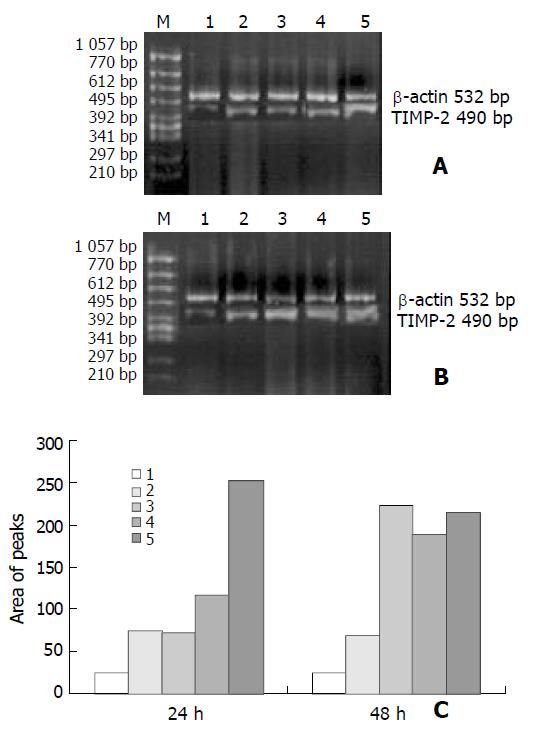 Interactions between cells and extracellular matrix (ECM) were critical for many cellular functions including division, migration, differentiation, and apoptosis[35]. In different mature normal tissues, ECM is specified by its structures and compositions to maintain tissue homeostasis and cellular quiescence. It have been found that remodeling of the ECM occurred during embryonic development and certain normal pathological processes such as wound-healing[36,37]. However, restructuring of the ECM has also been implicated in the pathogenesis of various human diseases including impaired wound-healing and fibrosis[38], rheumatoid arthritis[39], restenosis following balloon angioplasty[40], atherosclerosis[41], tumor development, invasion and metastasis[35,42].

Tumor invasion is a complex biological process, during which tumor cells detach from the primary tumor and infiltrate the surrounding tissues. This process has been found to require loss of cell contacts between tumor cells, active cell migration, adhesion to ECM and proteolytic degradation of the ECM[43,44]. Different molecules including cadherins, integrins, proteases, and growth factors were implicated in the regulation of invasion of tumor cells[44].

A major group of enzymes responsible for ECM degradation in cancer tissue has been found to be the MMP family, including collagenases, gelatinase, and stromelysins[45-49]. Collagenases can cleave fibrillar collagens at neutral conditions and play an important role in matrix remodeling. The largest sub-family of the MMPs is membrane-type (MT). MT-MMPs play a dual role in cell surface proteolysis. They can cleave a variety of extracellular components, and activate some secreted MMPs. Evidence has suggested that proteolytic activities at cell surface could promote cell invasion[50]. MMP-2, a 72-kDa type IV collagenase, is a cell surface-associated type I collagen-degrading MMP, which was found to designate gelatinase A[51]. Its overexpression has been observed in different types of tumors, and it was believed to be involved in tumor metastasis, primary tumor growth and angiogenesis[52]. MMP-2 is also regarded as a type IV collagenase involved in cell invasion across basement membrane. Thus, serum and tissue MMP profiles have been used as prognostic factors in certain types of malignant tumors including gastric and breast cancers[53]. MMP-9, a 97-kDa type IV collagenase also designating gelatinase B, was found to be associated with tumor invasion as well, its expression has been proven to be correlated with the differentiation grade of some malignancies[54]. In the present study, we did not find any effect of β-ionone on MMP-9 and MMP-2 activities in SGC-7901 cells. The growth inhibition on SGC-7901 cells appeared to be independence of the type IV collagenase activity.

TIMPs (TIMP-1, -2, -3 and -4) have been found to be the key regulators of MMP activity and ECM degradation[60]. The MMP inhibitors, TIMP-1 and TIMP-2 have been associated to several tumorigenic processes including development, invasion and metastasis of bronchial cancer[55-59]. Recent transgenic animal studies have demonstrated that alteration of the MMP/TIMP balance in vivo in favor of TIMP-1 activity could block neoplastic proliferation in the SV40 T antigen-induced murine hepatocellular carcinoma[61]. Active MT1-MMP was found to bind to amino-terminal domain of TIMP-2[62], whereas an interaction between the carboxyl-terminal domains of TIMP-2 and pro-MMP-2 was also described[63]. TIMP-2 might prevent SH2-protein-tyrosine phosphatase-1 (SHP-1) dissociation from immunoprecipitable epidermal growth factor receptor complex and a selective increase in total SHP-1 activity[64]. Our results showed that β-ionone might increase the expression of TIMP-1 and TIMP-2 in SGC-7901 cells. Clearly, further studies are needed to elucidate whether β-ionone inhibits metastasis of the cancer cells.

We thank Dr. Dong-Yan Jin for his critically reading and revising of the manuscript.