AIM: To investigate the expression of toll-like receptor 4 (TLR4) and MD-2 gene and protein in Kupffer cells (KCs) and their role in ischemia-reperfusion (IR) injury of rat liver graft.

RESULTS: The mRNA and protein expression of TLR4/MD-2 and the level of TNF-α in IR group increased significantly at 2 h following IR, and reached the maximum at 12 h, and slightly decreased at 24 h, but were still significantly higher than those in the control group (P < 0.01). The expression of these factors was markedly decreased after anti-TLR4 antibody treatment as compared with the IR group (P < 0.01).

Toll-like receptor 4 (TLR4) is a transmembrane protein, mainly existed in monocytes/macrophages[1-3]. It plays an important role in recognizing endotoxin (lipopolysaccharide, LPS) or LPS-CD14 complex, and mediating monocyte/macrophage activation and pro-inflammatory cytokine release[2,4,5]. MD-2 molecule is a secreting protein, linking with the exocytic area of TLR4, and facilitating the binding of TLR4 and LPS to enhance cell activation induced by LPS[6-10]. Kupffer cells (KCs) are not only the biggest residing macrophages in the body, but also are the main participant of ischemia-reperfusion injury (IRI) in liver transplantation[11-14]. Therefore, studying the expression of TLR4 and MD-2 gene and protein in KCs following IR is very important to clarify the source of cytokines involved in IRI. The aim of the current study was to investigate the expression of TLR4 and MD-2 gene and protein, and the production of cytokines in liver graft by isolating and culturing KCs following IRI, and to probe the role of TLR4 and MD-2 in IRI injury.

Male Wistar rats weighing 210-250 g, supplied by Chongqing Medical University, were used as donors and recipients. Orthotopic liver transplantation was performed with improved two-cuff technique introduced by Peng et al[15] as following: (1) Graft procurement: portal vein (PV), hepatic artery (HA), infrahepatic vena cava (IHVC), and bile duct were divided. Then the graft was infused and harvested for preparation. PV and IHVC were prepared by cuff technique, and a drainage Teflon catheter was inserted into the bile duct. (2) Implantation of graft: the graft was placed orthotopically in the recipient’s abdominal cavity after the original liver was removed. The suprahepatic vena cava was sutured end to end, and the portal vein was anastomosed by cuff method, then the liver was perfused. After the anastomosis of IHVA and HA was completed, the bile duct was reestablished end to end by Teflon catheter.

KCs were isolated at 0, 2, 12, 24 h following IR with in situ collagenase perfusion technique described by Gong et al[16]. In brief, the liver was removed with portal vein perfusion with Hank’s balance salt solution (HBSS) and digested in a solution of 0.5 g/L collagenase (type IV, Sigma, USA). The digest was washed thoroughly and plated on plastic dishes in RPMI medium containing 100 mL/L fetal calf serum (FCS). After 6 h incubation at 37 °C in humidified atmosphere containing 50 mL/L CO2 in air, the nonadherent cells were removed by pipet. The adherent cells were collected with a rubber policeman. KC purity exceeded 90% as assessed by light microscopy, and viability was greater than 95% as determined by trypan blue exclusion assay. The KCs at 0 h were regarded as control group, and those at 2, 12 and 24 h were as IR group.

Total RNA was isolated from rat KCs using the TRIZOL reagent (Life Technologies, USA). The quality of RNA was controlled by the intactness of ribosomal RNA bands. A total of 5 µg of each intact total RNA sample was reverse-transcribed to complementary DNA (cDNA) using AMV reverse transcriptase (Roche, USA).

Determination of TLR4 and MD-2 mRNA by RT-PCR

The PCR primers used are shown in Table 1. The conditions for amplification were as follows: denaturation at 94 °C for 1 min, annealing at 58 °C for 1 min, and extension at 72 °C for 1 min for 30 cycles, and extension at 72 °C for 7 min again. The PCR products were electrophoresed on 20 g/L agarose gels containing ethidium bromide, and video photographed on an ultraviolet transilluminator, and the results were shown as the ratio of relative absorbance of TLR4 or MD-2/β-actin analyzed with Quantity one 4.1.0 software.

Expression of TLR4 and MD-2 membrane protein in KCs was determined by flow cytometric analysis. In brief, KCs were incubated with rabbit anti-rat TLR4 polyclonal antibody (1 µg/mL) labeled with FITC and goat anti-rat MD-2 polyclonal antibody (1 µg/mL) labeled with PE (Sigma, USA). After washed three times, 10000 cells were analyzed by flow cytometry (Coulter, USA), and the percentage and mean fluorescence intensity (MFI) of TLR4 and MD-2-positive cells were taken as the indexes.

Supernatants were collected to measure the levels of TNF-α with ELISA kit (Jingmei Biotechnology Company, China) following the manufacturer’s instructions.

To determinate the role of TLR4 and MD-2 in LPS-induced KC activation, KCs were harvested and adjusted to the concentration of 1 × 10 6/ (mL.well). Then, 0.2 mL of anti-TLR4 antibody (1: 100) was added to the medium, and incubated for 30 min at 37 °C. The supernatants were collected again for measuring the levels of TNF-α by ELISA analysis following the manufacturer’s instructions.

RESULTS
Expression of TLR4 and MD-2 mRNA in KCs

RT-PCR analysis showed that KCs from control group had low but detectable levels of TLR4 and MD-2 mRNA. The mRNA level was significantly increased with time, reaching its maximum of nine-fold at 12 h following IR, and slightly declined 24 h after IR, but was still significantly higher than that in the control group (P < 0.01) (Figure 1). 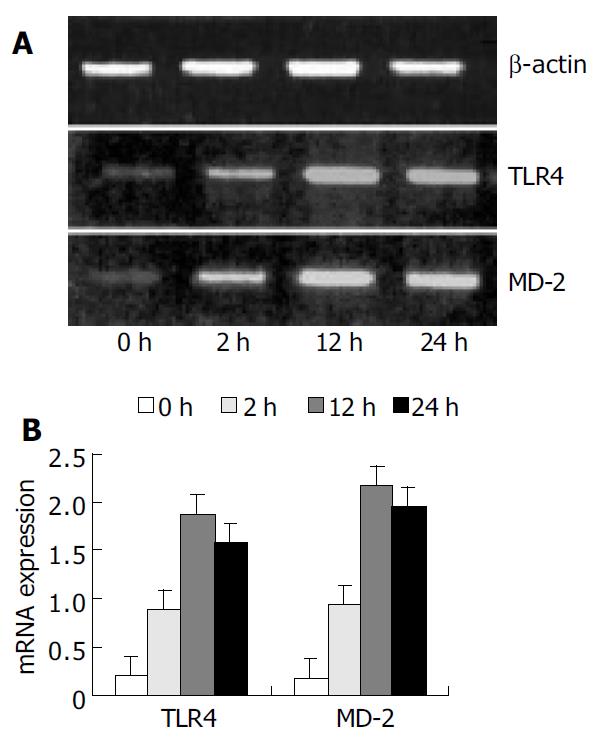 Figure 1 Expression of TLR4 and MD-2 mRNA by RT-PCR analysis. A: PCR products were electrophoresed on agarose gels and photographed. B: Quantitative data of mRNA levels were shown as the ratio of relative absorbance and expressed as mean ± SD. Expression of TLR4 and MD-2 mRNA were sig-nificantly increased in the IR group compared with the con-trol group (P < 0.01).
Binding of FITC, PE to KCs 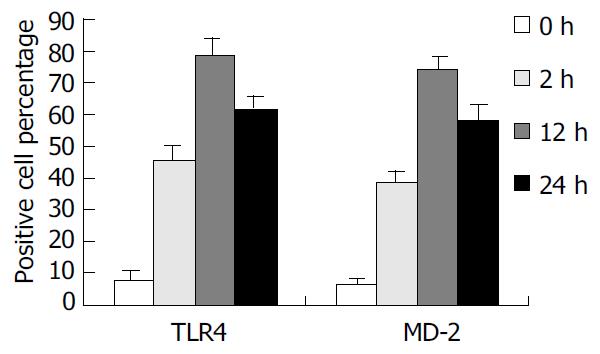 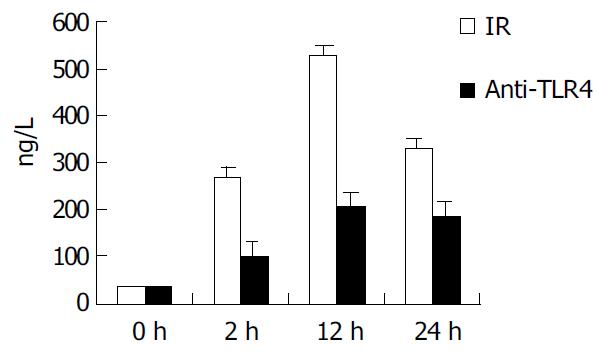 Toll protein is a transmembrane protein which mainly acts as a necessary tool for immune defence to microorganism[6,17-20]. The first toll-like protein in human cells was reported by Janeway, and named toll-like receptor (TLR)[3,21]. About ten members of TLR superfamily in mammals have been reported in recent years. Among them, TLR4 plays a key role in LPS signal transduction[4,22,23].

When LPS enters blood, it first binds to LBP (LPS binding protein), forming a LPS-LBP compound, and then binds to TLR4 on cell membranes leading to activation of cells[18,24,25]. Recent studies have confirmed that the activation of cells induced by LPS needs another important molecule, namely MD-2. MD-2 is a key regulator protein, which could promote LPS signal transduction through connecting with TLR4 on cell membranes and forming the TLR4/MD-2 compound[26-28].

Kupffer cells are special macrophages residing in hepatic sinusoids, which constitute 80% to 90% of total fixed macrophages in the body[13,29]. Because of their special location, KCs act as an important defensive barrier for gut-derived endotoxemia. A large amount of endotoxins contact with KCs through portal circulation following ischemia- reperfusion after liver transplantation, and activate the KCs[30,31]. Thus, it is very important to study the expression of TLR4 and MD-2 in KCs to clarify the origin of cytokines and the mechanism of IRI.

In our study, we found there were weak expressions of TLR4 and MD-2 gene and protein in resting KCs, which might play a critical role in maintaining the normal function of KCs, and might be essential for keeping KCs to be ready for activation after stress. But after IR, a large mount of LPS entered liver sinusoids, activated KCs, resulting in increased release of harmful cytokines such as TNF-α , which reached the maximum at 12 h after IR. To correctly illuminate the relation between TLR4 and MD-2 and downstream cytokines, we used anti-TLR4 antibody to inhibit the binding function of TLR4, and found that the production of TNF-α was greatly decreased, suggesting that the expression of TLR4 and MD-2 protein is indispensable to the secretion of downstream cytokines.

In summary, the present data suggest that there are weak expressions of TLR4 and MD-2 mRNA and protein in Kupffer cells. Expressions of TLR4 and MD-2 can significantly increase following ischemia-reperfusion in rat liver transplantation. LPS can induce activation of KCs by combining with TLR4 and MD-2, and subsequently release harmful cytokines, which ultimately attack the graft. Further studies are needed for elucidating TLR4/MD-2-mediated signal transduction pathways which lead to the secretion of cytokines during IRI on liver graft.

This work was supported by the Key Laboratory of Hepatobiliary Surgery Department of Chongqing Medical University.